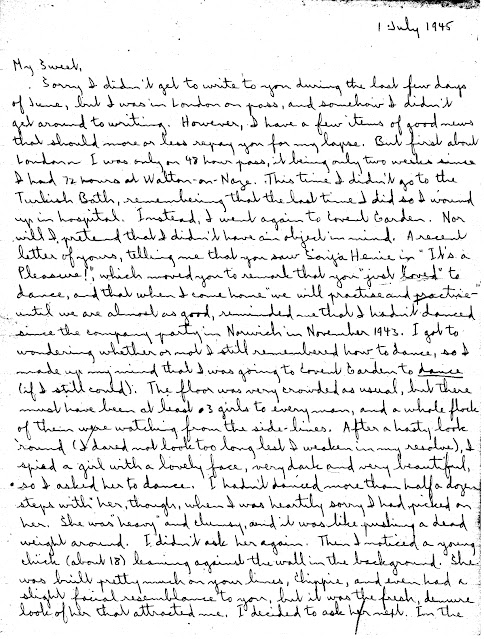 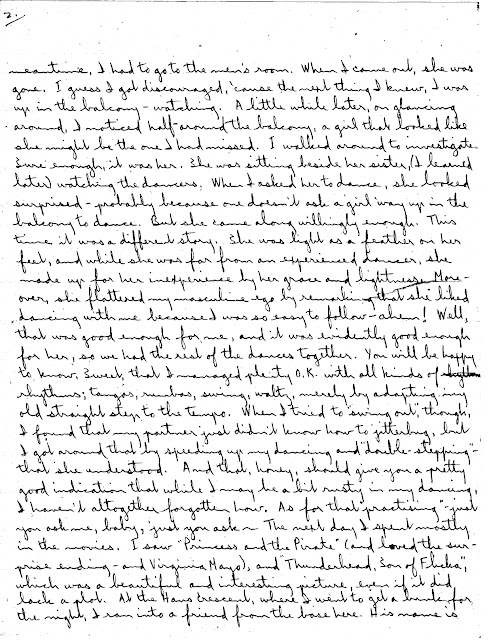 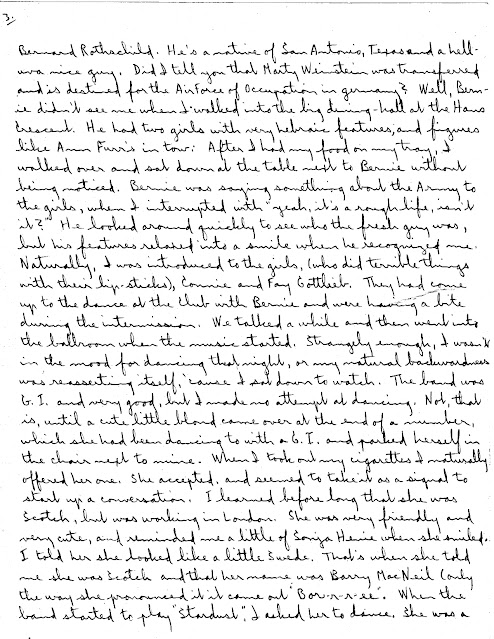 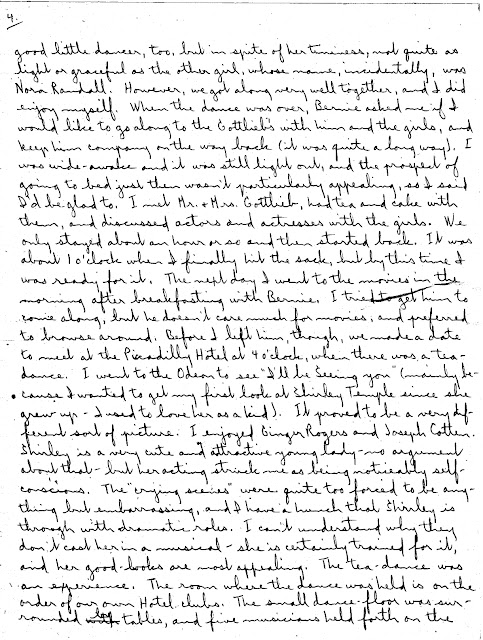 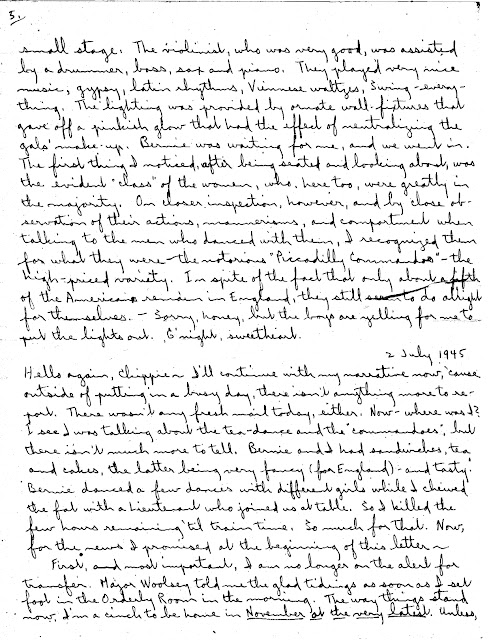 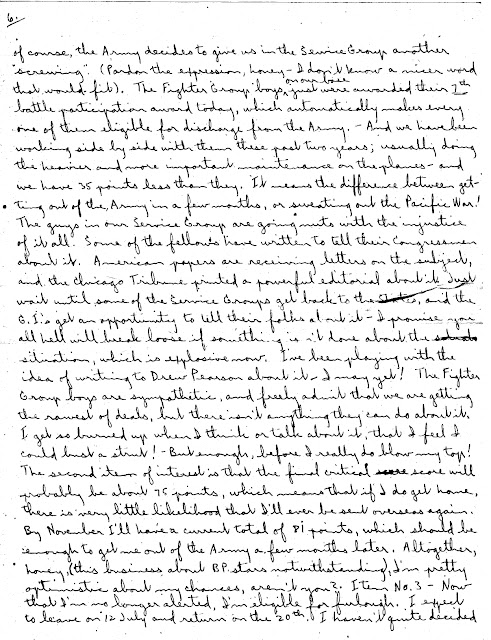 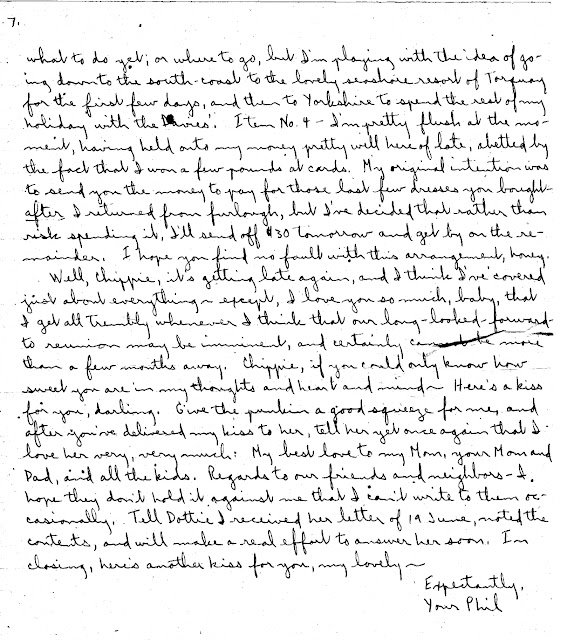 2 July 1945
Hello again, Chippie—I'll continue with my narrative now, 'cause outside of putting in a busy day, there isn't anything more to report. There wasn't any fresh mail today, either. Now - where was I? I see I was talking about the tea-dance and the "commandoes", but there isn't much more to tell. Bernie and I had sandwiches, tea, and cakes, the latter being very fancy (for England) and tasty. Bernie danced a few dances with different girls while I chewed the fat with a Lieutenant who joined us at table. So I killed the few hours remaining ‘til train time. So much for that. Now, for the news I promised at the beginning of this letter ~

First, and most important, I am no longer on the alert for transfer. Major Woolsey told me the glad tidings as soon as I set foot in the Orderly Room in the morning. The way things stand now, I'm a cinch to be home in November at the very latest. Unless, of course, the Army decides to give us in the Service Group another "screwing" (Pardon the expression, honey - I don't know a nicer word that would fit). The Fighter Group boys on our base just were awarded their 7th battle participation award today, which automatically makes every one of them eligible for discharge from the Army. - And we have been working side by side with them these past two years; usually doing the heavier and more important maintenance on the planes - and we have 35 points less than they. It means the difference between getting out of the Army in a few months, or sweating out the Pacific War! The guys in our Service Groups are going nuts with the injustice of it all. Some of the fellow's have written to tell their congressmen about it. American papers are receiving letters on the subject, and the Chicago Tribune printed a powerful editorial about it. Just wait until some of the Service Groups get back to the States, and the G.I.s get an opportunity to tell their folks about it - I promise you all hell will break loose if something isn’t done about the situation, which is explosive now. I've been playing with the idea of writing to Drew Pearson about it - I may yet! The Fighter Group boys are sympathetic, and freely admit that we are getting the rawest of deals, but there isn't anything they can do about it. I get so burned up when I think or talk about it, that I feel I could bust a strut! - But enough, before I really do blow my top! The second item of interest is that the final critical score will probably be about 75 points, which means that if I do get home, there is very little likelihood that I'll ever be sent overseas again. By November I'll have a current total of 81 points, which should be enough to get me out of the Army a few months later. Altogether, honey, (this business about BP stars notwithstanding), I'm pretty optimistic about my chances, aren't you? Item No. 3 - Now that I’m no longer alerted, I’m eligible for furlough. I expect to leave on 12 July and return on the 20th, I haven't quite decided what to do yet; or where to go, but I'm playing with the idea of going down to the south-coast to the lovely seashore resort of Torquay for the first few days, and then to Yorkshire to spend the rest of my holiday with the Davies'. Item No. 4 - I'm pretty flush at the moment, having held onto my money pretty well here of late, abetted by the fact that I won a few pounds at cards. My original intention was to send you the money to pay for those last few dresses you bought - after I returned from furlough, but I've decided that rather than risk spending it, I'll send off $130 tomorrow and get by on the remainder. I hope you find no fault with this arrangement, honey.
Well, Chippie, it's getting late again, and I think I've covered just about everything except, I love you so much, baby, that I get all trembly whenever I think that our long-looked-forward-to reunion may be imminent, and certainly cannot be more than a few months away. Chippie, if you could only know how sweet you are in my thoughts and heart and mind ~ Here's a kiss for you, darling. Give the punkin a good squeeze for me, and after you've delivered my kiss to her, tell her yet once again that I love her very much: My best love to Mom, your Mom and Dad, and all the kids. Regards to our friends and neighbors - I hope they don't hold it against me that I can't write to them occasionally. Tell Dottie I received her letter of 19 June, noted the contents, and will make a real effort to answer her soon. In closing, here's another kiss for you, my lovely ~

Expectantly,
Your Phil
Posted by Marilyn at 3:29 PM