Post #269 - January 14, 1944 Ruth Has Gotten Thinner and Shapelier and I Rode to the End of the Line, Which Happened to be Aldwych and the Strand 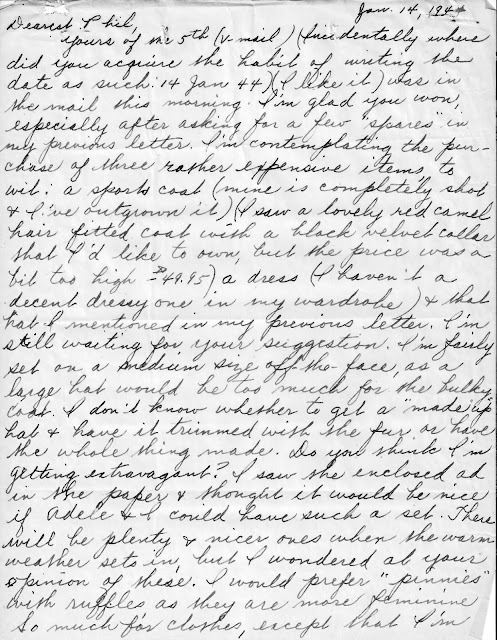 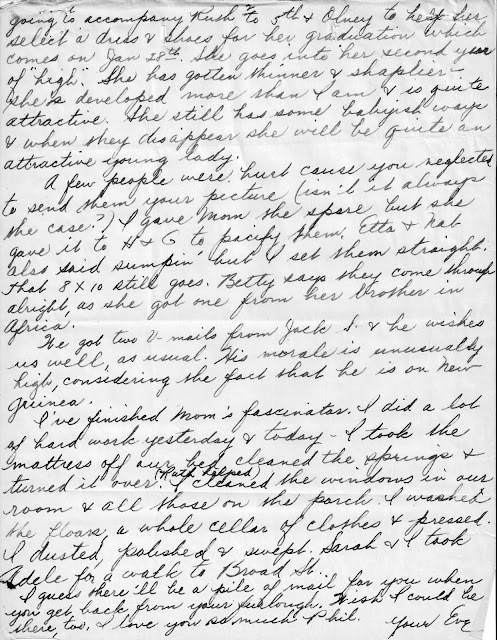 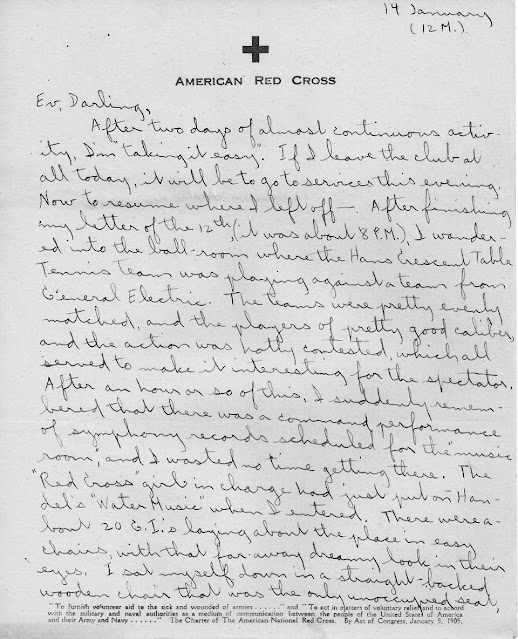 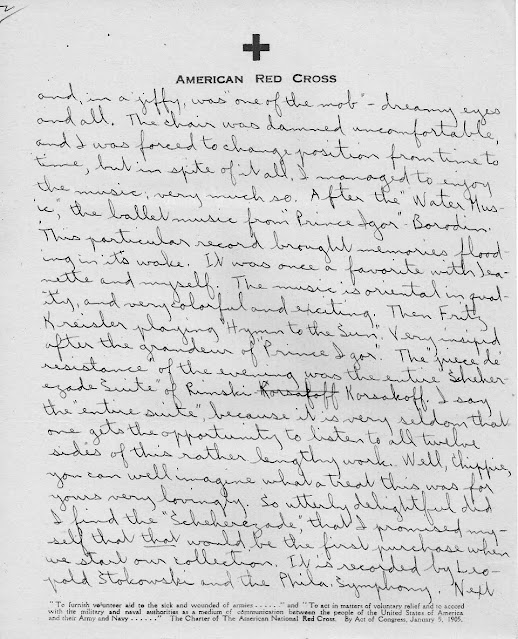 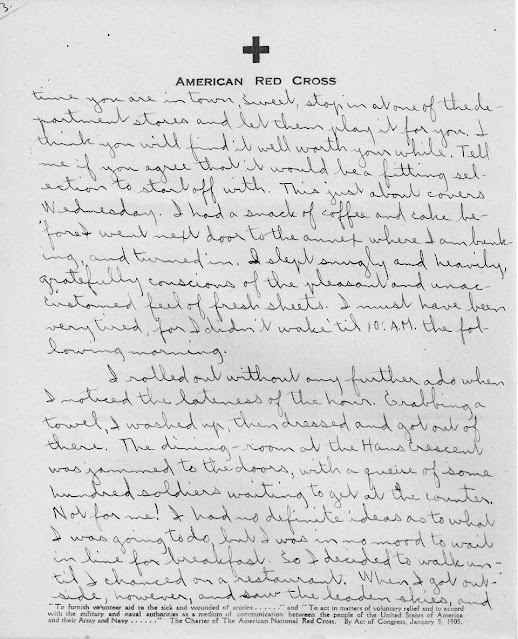 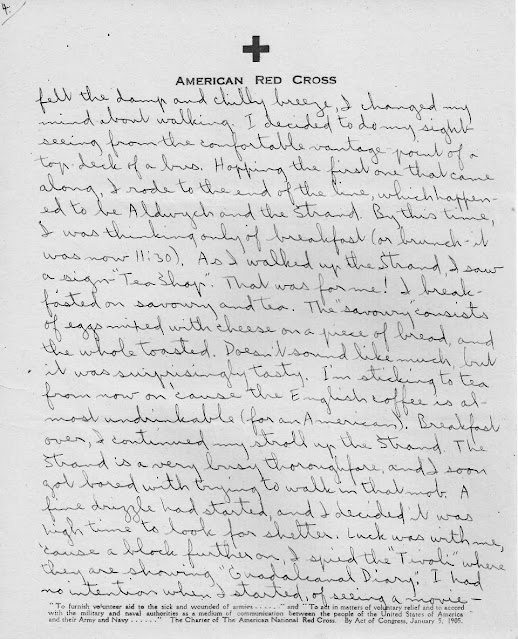 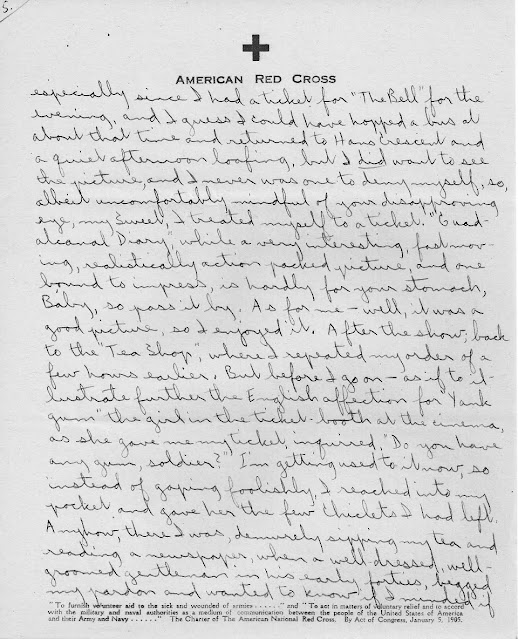 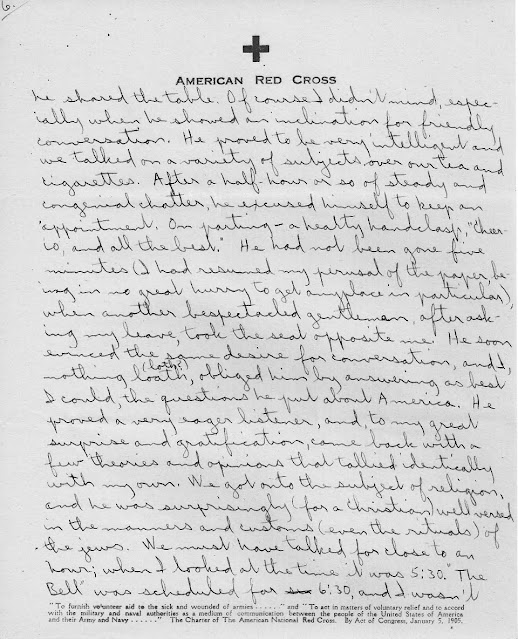 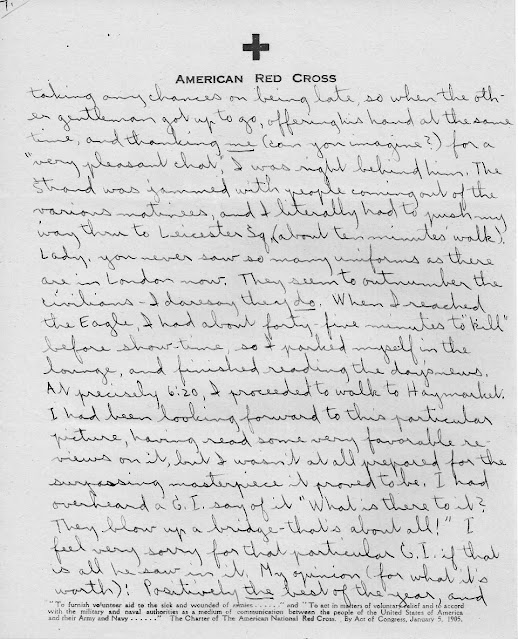 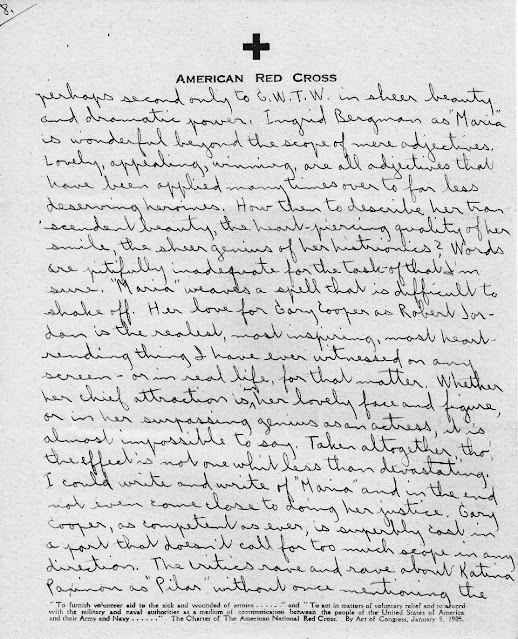 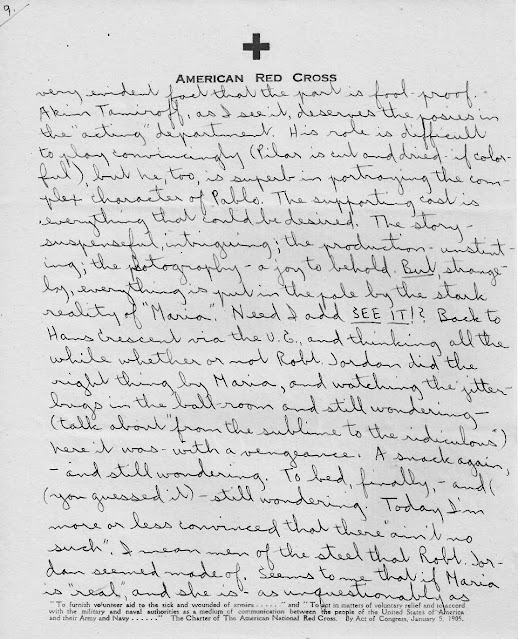 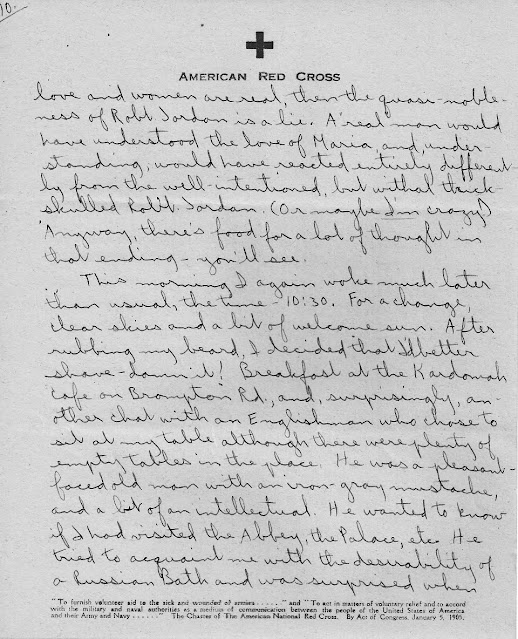 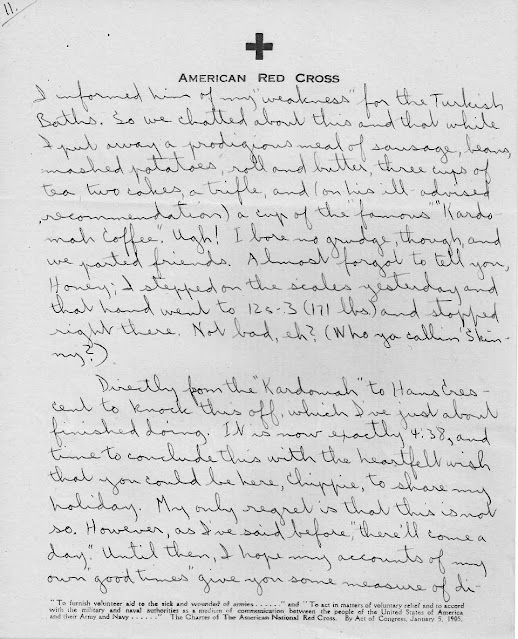 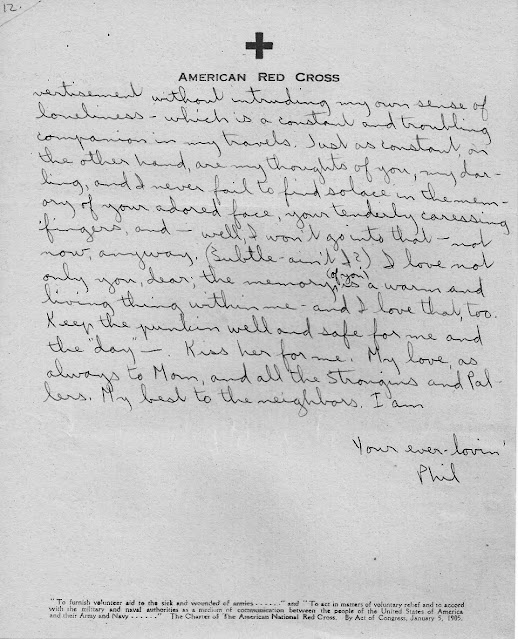 Yours of the 5th (V-mail) (Incidentally, where did you acquire the habit of writing the date as such: 14 Jan. 44.) (I like it.) was in the mail this morning. I'm glad you won, especially after asking for a few “spares” in my previous letter. I'm contemplating the purchase of three rather expensive items, to wit: a sports coat (mine is completely shot and I've outgrown it). (I saw a lovely red camel hair fitted coat with a black velvet collar that I'd like to own, but the price was a bit too high $49.95) a dress (I haven’t a decent dressy one in my wardrobe) and that hat I mentioned in my previous letter. I'm still waiting for your suggestion. I'm fairly set on a medium size off-the-face, as a large hat would be too much for the bulky coat. I don't know whether to get a “made up” hat and have it trimmed with the fur or have the whole thing made. Do you think I'm getting extravagant? I saw the enclosed ad in the paper and thought it would be nice if Adele and I could have such a set. There will be plenty of nicer ones when the warmer weather sets in, but I wondered at your opinion of these. I would prefer “pinnies” with ruffles as they are more feminine. So much for clothes, except that I'm going to accompany Ruth to 5th and Olney to help her select address and shoes for her graduation, which comes on Jan. 28th. She goes into her second year of “high.” She has gotten thinner and shapelier—she's developed more than I am and is quite attractive. She still has some babyish ways, and when they disappear, she will be quite an attractive young lady.

A few people were hurt ’cause you neglected to send them your picture (isn't it always the case?) I gave mom the spare, but she gave it to Harry and Goldie to pacify them. Etta and Nat also said sumpin’, but I set them straight. That 8 by 10 still goes. Betty says they come through alright, as she got one from her brother in Africa.

We got two V-mails from Jack S. and he wishes us well, as usual. His morale is unusually high considering the fact that he is in New Guinea.

I’ve finished Mom’s fascinator. I did a lot of hard work yesterday and today—I took the mattress off our bed, cleaned the springs and turned it over (Ruth helped). I cleaned the windows in our room and all those on the porch. I washed the floors, a whole cellar of clothes and pressed. I dusted, polished and swept. Sarah and I took Adele for a walk to Broad Street.

I guess there will be a pile of mail for you when you get back from your furlough. Wish I could be there, too. I love you so much, Phil.

After two days of almost continuous activity, I'm taking it easy. If I leave the club at all today, it will be to go to services. Now to resume where I left off—after finishing my letter of the 12th, (it was about 8:00 P.M.) I wandered into the ballroom where the Hans Crescent table tennis team was playing against the team from General Electric. The teams were pretty evenly matched and the players of pretty good caliber, and the action was hotly contested, which all served to make it interesting for the spectator. After an hour or so this, I suddenly remembered that there was a command performance of symphony records scheduled for the “music room,” and I wasted no time getting there. The “Red Cross” girl in charge had just put on Handel’s “Water Music” when I entered. There were about 20 G.I.s laying about the place in easy chairs, with that faraway dreamy look in their eyes. I sat myself down in a straight-backed wooden chair that was the only unoccupied seat, and in a jiffy, was “one of the mob”—dreamy eyes and all. The chair was damned uncomfortable and I was forced to change position from time to time, but in spite of it all I managed to enjoy the music; very much so. After the “Water Music,” the ballet music from “Prince Igor” Borodin. This particular record brought memories flooding in its wake. It was once a favorite with Jeanette and myself. The music is Oriental in quality and very colorful and exciting. Then Fritz Kreisler playing “Hymn to the Sun.” Very insipid after the grandeur of “Prince Igor.” The “piece de resistance” of the evening was the entire “Scheherezade Suite” of Rimski Korsakoff. I say the “entire suite” because it is very seldom that one gets the opportunity to listen to all twelve sides of this rather lengthy work. Well, Chippie, you can well imagine what a treat this was for yours very lovingly. So utterly delightful did I find the “Scheherezade,” that I promised myself that that would be the first purchase when we start our collection. It's recorded by Leopold Stokowski and the Phila. Symphony. Next times you are in town, Sweet, stop in at one of the department stores and let them play it for you. I think you will find it well worth your while. Tell me if you agree that it would be a fitting selection to start off with. This just about covers Wednesday. I had a snack of coffee and cake before I went next door to the annex where I am bunking and turned in. I slept snugly and heavily, gratefully conscious of the pleasant and unaccustomed feel of fresh sheets. I must have been very tired, for I didn't wake ’til 10 A.M. the following morning.

This morning I again woke much later than usual, the time—10:30. For a change, clear skies and a bit of welcome sun. After rubbing my beard, I decided that I better shave—damn it. Breakfast at the Kardomah Cafe on Brompton Road, and, surprisingly, another chat with an Englishman who chose to sit at my table although there were plenty of empty tables in the place. He was a pleasant-faced old man with an iron-gray mustache, and a bit of an intellectual. He wanted to know if I had visited the Abbey, the Palace, etc. He tried to acquaint me with the desirability of a Russian Bath and was surprised when I informed him of my “weakness” for the Turkish Baths. So we chatted about this and that while I put away a prodigious meal of sausage, beans, mashed potatoes, roll and butter, three cups of tea, two cakes, a trifle, and (on his ill-advised recommendation), a cup of the famous “Kardomah Coffee.” Ugh! I bore no grudge, though, and we parted friends, Almost forgot to tell you, Honey; I stepped on the scales yesterday and that hand went to 12s-3 (171 lbs. and stopped right there. Not bad, eh? (Who you callin’ Skinny?)

Directly from the “Kardomah” to Hans Crescent to knock this off, which I'm just about finished doing. It is now exactly 4:38 and time to conclude this with the heartfelt wish that you could be here, Chippie, to share my holiday. My only regret is that this is not so. However, as I've said before, “there’ll come a day.” Until then, I hope my accounts of my own “good times” give you some measure of divertissement without intruding my own sense of loneliness, which is a constant and troubling companion in my travels. Just as constant, on the other hand, are my thoughts of you, my darling, and I never fail to find solace in the memory of your adored face, your tenderly caressing fingers, and—well, I won't go into that—not now, anyway. (Subtle—ain’t I?) I love not only you, dear; the memory of you is a warm and living thing within me—and I love that, too. Keep the punkin’ well and safe for me and the “day”—Kiss her for me. My love, as always to Mom and all the Strongins and Pallers. My best to the neighbors. I am

Your ever-lovin’
Phil
Posted by Marilyn at 4:46 PM