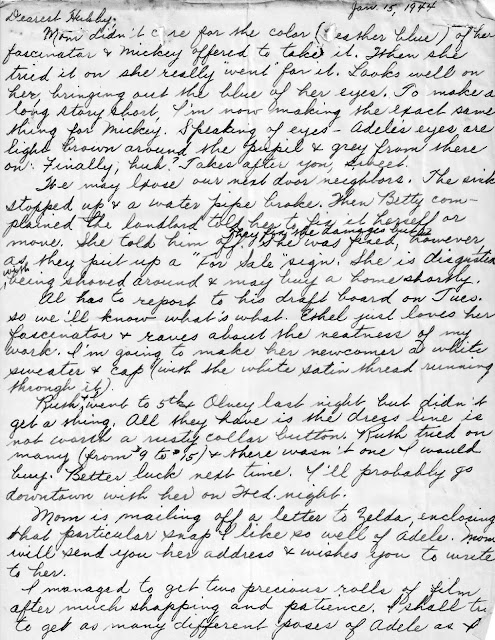 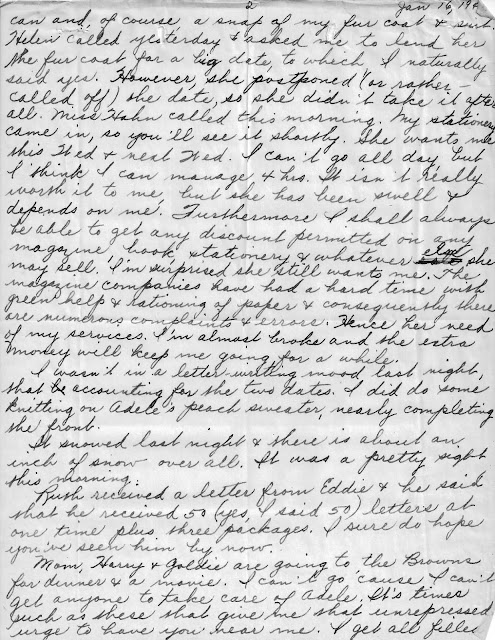 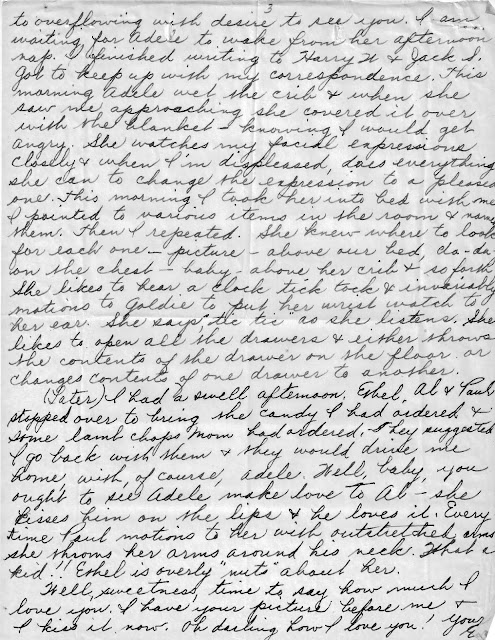 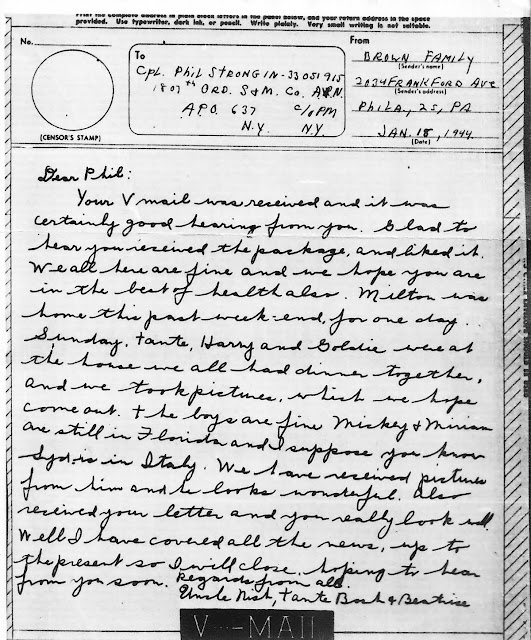 Mom didn't care for the color, (heather blue) of her fascinator, and Mickey offered to take it. When she tried it on, she really “went” for it. Looks well on her, bringing out the blue of her eyes. To make a long story short, I'm now making the exact same thing for Mickey. Speaking of eyes—Adele's eyes are light brown around the pupil and grey from there on. Finally, huh? Takes after you, sweet.

We may lose our next door neighbors. The sink stopped up and a water pipe broke. When Betty complained, the landlord told her to fix it herself or move. She told him off. They fixed the damages, but she was fired, however, as they put up a ”For Sale” sign. She is disgusted with being shoved around and may buy a home shortly.

Al has to report to his draft board on Tuesday, so we'll know what's what. Ethel just loves her fascinator and raves about the neatness of my work. I'm going to make her newcomer a white sweater and cap (with the white satin thread running through it).

Ruth and I went to 5th and Olney last night, but didn't get a thing. All they have in the dress line is not worth a rusty collar button. Ruth tried on many (from $9 to $15) and there wasn't one I would buy. Better luck next time. I'll probably go downtown with her on Wednesday night.

Mom is mailing off a letter to Zelda, enclosing that particular snap I like so well of Adele. Mom will send you her address and wishes you to write to her.

I managed to get two precious rolls of film after much shopping and patience. I shall try to get as many different poses of Adele as I

can and, of course, the snap of my fur coat and suit. Helen called yesterday and asked me to lend her the fur coat for a big date, to which I naturally said yes. However, she postponed (or rather—called off) the date so she didn't take it after all. Miss Hahn called this morning. My stationery came in, so you'll see it shortly. She wants me this Wed. and next Wed. I can't go all day, but I think I can manage 4 hrs. It isn't really worth it to me, but she has been swell and depends on me. Furthermore, I shall always be able to get any discount permitted on any magazine books, stationery and whatever else she may sell. I'm surprised she still wants me. The magazine companies have had a hard time with green help and rationing of paper, and consequently, there are numerous complaints and errors. Hence, her need of my services. I'm almost broke and the extra money will keep me going for a while.

I wasn't in the letter writing mood last night, that accounting for the two dates. I did do some knitting on Adele's peach sweater, nearly completing the front.

It snowed last night and there is about an inch of snow over all. It was a pretty sight this morning.

Ruth received a letter from Eddie and he said that he received 50 (yes, I said 50) letters at one time plus three packages. I sure do hope you’ve seen him by now.

Mom, Harry and Goldie are going to the Browns for dinner and a movie. I can't go 'cause I can't get anyone to take care of Adele. It's times such as these that give me that unrepressed urge to have you near me. I get all filled to overflowing with desire to see you. I'm waiting for Adele to wake up from her afternoon nap. I finished writing to Harry W. and Jack S. Got to keep up with my correspondence. This morning Adele wet the crib and when she saw me approaching she covered it over with the blanket—knowing I would get angry. She watches my facial expressions closely, and when I'm displeased, does everything she can to change the expression to a pleasant one. This morning I took her into bed with me and I pointed to various items in the room and named them. Then I repeated. She knew where to look for each one—picture—above our bed, da-da—on the chest, baby—above her crib, and so forth. She likes to hear the clock tick tock and invariably motions to Goldie to put her wrist watch to her ear. She says “tick tick” as she listens. She likes to open all the drawers and either throws the contents of the drawer on the floor or changes contents of one drawer to another.

(Later) I had a swell afternoon. Ethel, Al and Paul stopped over to bring the candy I had ordered and some lamb chops Mom had ordered. They suggested I go back with them and they would drive me home, with, of course, Adele. Well, baby, you ought to see Adele make love to Al—she kisses him on the lips and he loves it. Every time Paul motions to her with outstretched arms, she throws her arms around his neck. What a kid!! Ethel is overly “nuts” about her.

Well, sweetness, time to say how much I love you. I have your picture before me and I kiss it now. Oh darling, how I love you!

Your V-mail was received and it was certainly good hearing from you. Glad to hear you received the package and liked it. We all here are fine and we hope you are in the best of health also. Milton was home this past week-end for one day. Sunday Tante, Harry and Goldie were at the house and we all had dinner together, and we took pictures, which we hope come out. The boys are fine. Mickey and Miriam are still in Florida, and I suppose you know Syd is in Italy. We have received pictures from him and he looks wonderful. Also received your letter and you really look well. Well, I've covered all the news up to the present so I will close. Hoping to hear from you soon.

Regards from all.
Uncle Nish, Tante Bash and Beatrice.
Posted by Marilyn at 8:56 AM