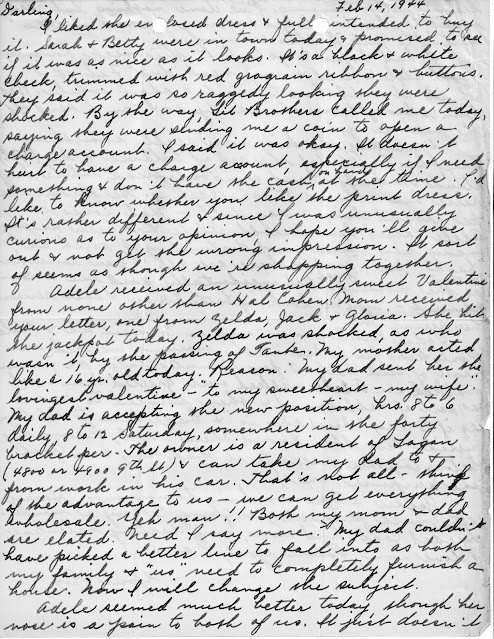 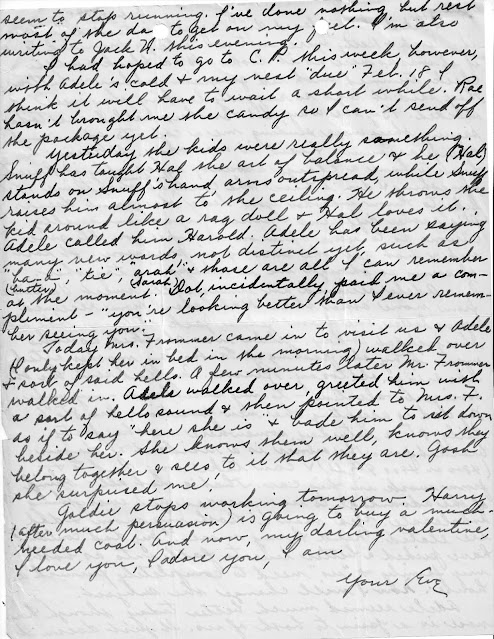 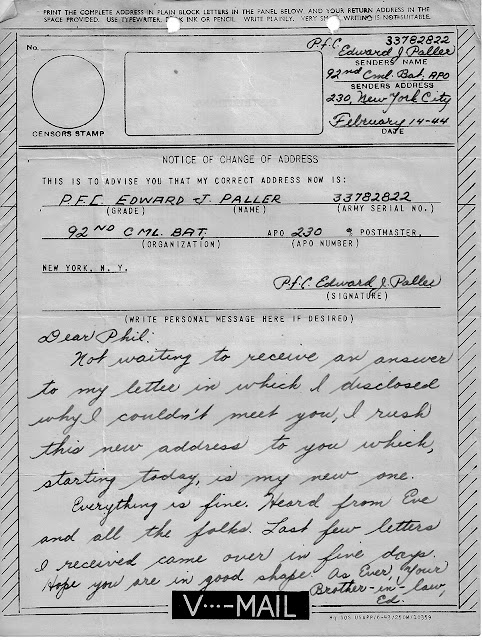 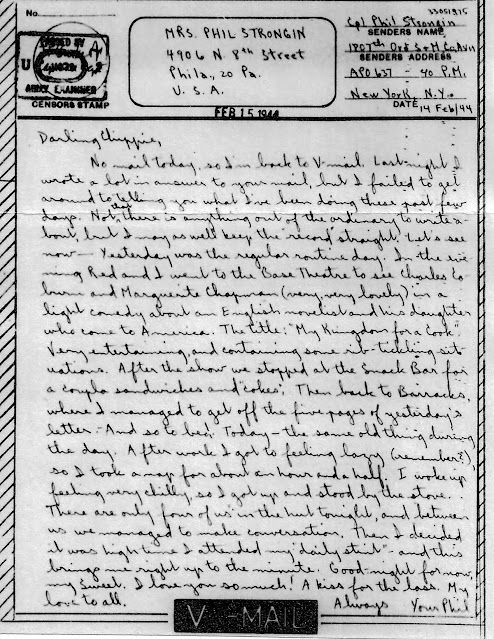 February 14, 1944
Darling,
I liked the enclosed dress and fully intended to buy it. Sarah and Betty were in town today and promised to see if it was as nice as it looks. It's a black and white check, trimmed with red grosgrain ribbon and buttons. They said it was so raggedy looking they were shocked. By the way, Lit Brothers called me today saying they were sending me a coin to open a charge account. I said it was okay. It doesn't hurt to have a charge account, especially if I need something and don't have the cash on hand at the time. I'd like to know whether you like the print dress. It's rather different, and since I was unusually curious as your opinion, I hope you'll give out and not get the wrong impression. It sort of seems as though we're shopping together.
Adele received an unusually sweet Valentine from none other than Hal Cohen. Mom received your letter, one from Zelda, Jack and Gloria. She hit the jackpot today. Zelda was shocked, as who wasn't, by the passing of Tante. My mother acted like a 16 yr. old today. Reason: My dad sent her the lovingest valentine—“to my sweetheart—my wife.” My dad is accepting the new position, hrs. 8 to 6 daily, 8 to 12 Saturday, somewhere in the forty bracket per. The owner is a resident of Logan (4800 or 4900 9th St.) and can take my dad to and from work in his car. That's not all—think of the advantage to us—we can get everything wholesale. Yeh man!! Both my mom and dad are elated. Need I say more? My dad couldn't have picked a better line to fall into as both my family and “us” need to completely furnish a house. Now I will change the subject.
Adele seemed much better today, though her nose is a pain to both of us. It just doesn't seem to stop running. I've done nothing but rest most of the day to get on my feet. I'm also writing to Jack N. this evening.
I had hoped to go to Clare Pruett this week, however, with Adele’s cold and my next “due” Feb. 18 I think it will have to wait a short while. Rae hasn't brought me the candy, so I can't send off the package yet.
Yesterday the kids were really something. Snuff has taught Hal the art of balance and he (Hal) stands on Snuff’s hand, arms outspread, while Snuff raises him almost to the ceiling. He throws the kid around like a rag doll and Hal loves it. Adele called him Harold. Adele has been saying many new words, not distinct yet ,such as “ba-a” (butter), “tie,” “arah,” (Sara), and those are all I can remember at the moment. Dot, incidentally, paid me a compliment—“you're looking better than I ever remember seeing you.”
Today Mrs. Frommer came in to visit us and Adele (I only kept her in bed in the morning), walked over and sort of said hello. A few minutes later, Mr. Frommer walked in. Adele walked over, greeted him with a sort of hello sound and then pointed to Mrs. Frommer as if to say “here she is and bade him to sit down beside her. She knows them well, knows they belong together, and sees to it that they are. Gosh, she surprised me!
Goldie stops working tomorrow. Harry (after much persuasion), is going to buy a much-needed coat. And now, my darling valentine, I love you, I adore you, I am
Your Eve
February 14, 1944
Darling Chippie,
No mail today, so I'm back to V-mail. Last night I wrote a lot in answer to your mail, but I failed to get around to telling you what I've been doing these past few days. Not that there is anything out of the ordinary to write about, but I may as well keep the “record” straight. Let's see now—Yesterday was the regular routine day. In the evening, Red and I went to the Base Theatre to see Charles Coburn and Marguerite Chapman (very, very lovely) in a light comedy about an English novelist and his daughter who come to America. The title: “My Kingdom for a Cook.” Very entertaining and containing some rib-tickling situations. After the show we stopped at the Snack Bar for a coupla of sandwiches and “cokes.” Then back to Barracks, where I managed to get off the five pages of yesterday's letter. And so to bed. Today—the same old thing during the day. After work I got to feeling lazy (remember?) so I took a nap for about an hour and a half. I woke up feeling very chilly, so I got up and stood by the stove. There are only four of us in the hut tonight, and between us we managed to make a conversation. Then I decided it was high time I attended my “daily stint”—and this brings me right up to the minute. Good-night for now, my Sweet. I love you so much! A kiss for the lass. My love to all.
Always
Your Phil
February 14, 1944
Dear Phil:
Not waiting to receive an answer to my letter in which I disclosed why I couldn't meet you I rush this new address to you which, starting today, is my new one.
Everything is fine. Heard from Eve and all the folks. Last few letters I received came over in five days. Hope you are in good shape.
As Ever,
Your Brother-in-law,
Ed.