Post #297 - February 16, 1944 Yale Stopped Over in the Afternoon and Sgt. Peppler Agreed With Me that I was Damned Lucky to Get Out of the Infantry When I Did 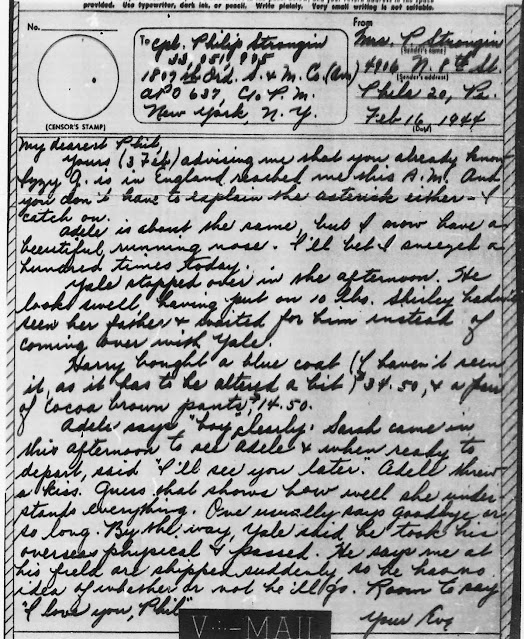 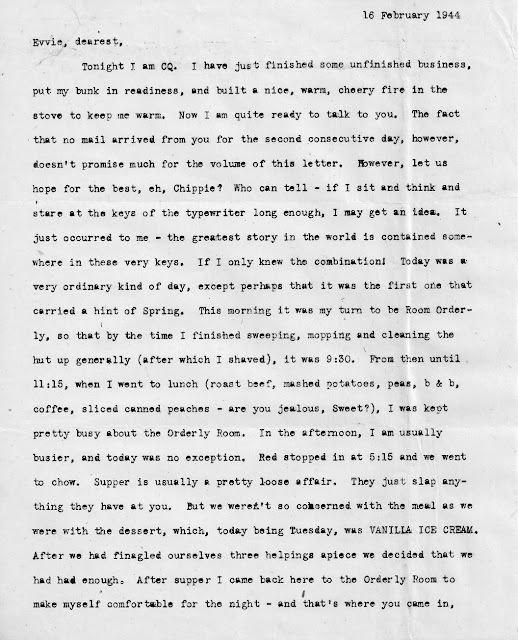 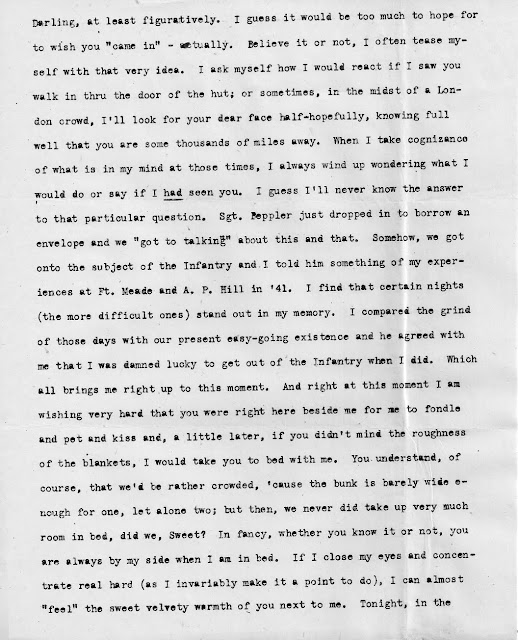 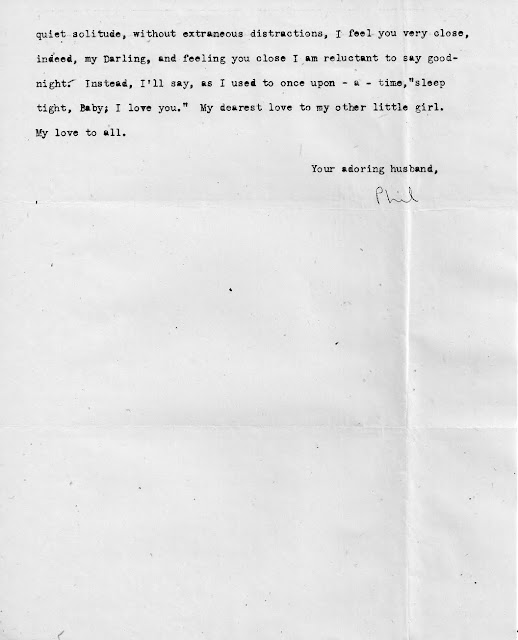 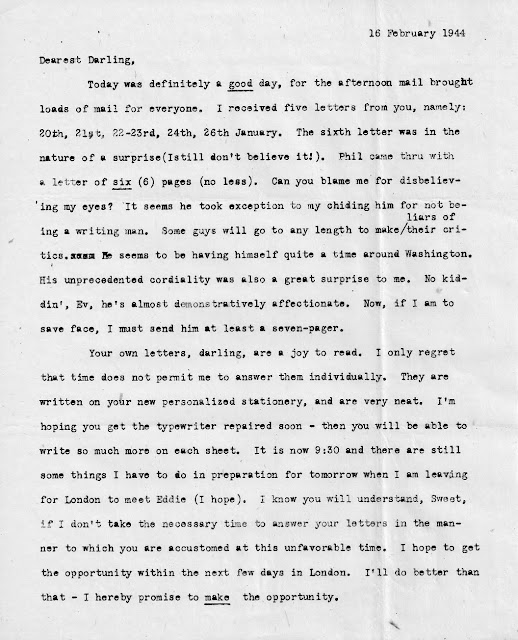 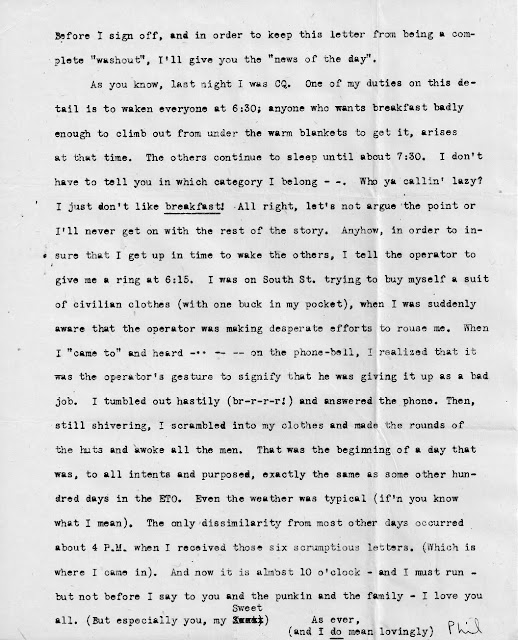 Yours (3 Feb.) advising me that you already know Izzy G. is in England reached me this morning and you don't have to explain the asterisk either—I catch on.

Adele is about the same, but I now have a beautiful running nose. I’ll bet I sneezed a hundred times today.

Yale stopped over in the afternoon. He looks well, having put on 10 lbs. Shirley had’nt seen her father and visited for him instead of coming over with Yale.

Adele says “boy” clearly. Sarah came in this afternoon to see Adele and when ready to depart, said, “I'll see you later.” Adele threw a kiss. Guess that shows how well she understands everything. One usually says goodbye or so long. By the way, Yale said he took his overseas physical and passed. He says men at his field are shipped suddenly, so he has no idea of whether or not he'll go. Room to say “I love you, Phil.”

Tonight I am CQ. I have just finished some unfinished business, put my bunk in readiness, and built a nice, warm, cheery fire in the stove to keep you warm. Now I am quite ready to talk to you. The fact that no mail arrived from you for the second consecutive day, however, doesn't promise much for the volume of this letter. However, let us hope for the best, eh, Chippie? Who can tell—if I sit and think and stare at the keys at the typewriter long enough, I may get an idea. It just occurred to me—the greatest story in the world is contained somewhere in these very keys. If I only knew the combination! Today was a very ordinary kind of day, except perhaps that it was the first one that carried a hint of Spring. This morning, it was my turn to be Room Orderly, so that by the time I finished sweeping, mopping, and cleaning the hut up generally (after which I shaved), it was 9:30. From then until 11:15, when I went to lunch (roast beef, mashed potatoes, peas, b & b, coffee, sliced canned peaches—are you jealous, Sweet?), I was kept pretty busy about the Orderly Room. In the afternoon, I am usually busier, and today was no exception. Red stopped in at 5:15 and we went to chow. Supper is usually a pretty loose affair. They just slap anything they have at you. But we weren't so concerned with the meal as we were with dessert, which, today being Tuesday, was VANILLA ICE CREAM. After we had finagled ourselves three helpings apiece, we decided that we had had enough. After supper, I came back here to the Orderly Room to make myself comfortable for the night—and that's where you came in, Darling, at least figuratively. I guess it would be too much to hope for to wish you “came in”—actually. Believe it or not, I often tease myself with that very idea. I ask myself how I would react if I saw you walking through the door of the hut; or sometimes, in the midst of a London crowd, I'll look for your dear face, half-hopefully, knowing full well that you are some thousands of miles away. When I I take cognizance of what is in my mind that these times, I always wind up wondering what I would do or say if I had seen you. I guess I'll never know the answer to that particular question. Sgt. Peppler just dropped in to borrow an envelope and we “got to talking” about this and that. Somehow, we got wanted the subject of the infantry and I told him something of my experiences at Ft. Meade and A.P. Hill in ’41. I find that certain nights (the more difficult ones) stand out in my memory. I compared the grind of those days with our present, easy-going existence and he agreed with me that I was damn lucky to get out of the Infantry when I did. Which all brings me right up to this moment. And right at this moment I am wishing very hard that you were right here beside me for me to fondle and pet and kiss and, a little later, if you didn't mind the roughness of the blankets, I would take you to bed with me. You understand, of course, that we’d be rather crowded, ’cause the bunk is barely wide enough for one, lett alone two; but then, we never do take up very much room in bed, did we Sweet?In fancy, whether you know it or not, you are always by my side when I am in bed. If I close my eyes and concentrate real hard (as I invariably make it a point to do), I can almost “feel” the sweet velvety warmth of you next to me. Tonight in the quiet solitude, without extraneous distractions, I feel you very close indeed, my Darling, and feeling you close, I am reluctant to say goodnight. Instead, I'll say as I used to once upon-a-time “sleep tight, Baby/ I love you.” My dearest love to my other little girl. My love to all.

Today was definitely a good day, for the afternoon mail brought loads of mail for everyone. I received five letters from you, namely 20th, 21st, 22-23rd, 24th, 26th January. The sixth letter was in the nature of the surprise (I still don't believe it!). Phil came through with a letter of six pages (no less). Can you blame me for disbelieving my eyes? It seems he took exception to my chiding him for not being a writing man. Some guys will go to any lengths to make liars of their critics. He seems to be having himself quite a time around Washington. This unprecedented cordiality was also great surprise to me. No kiddin’, Ev, he's almost demonstratively affectionate. Now, if I am to save face, I must send him at least a seven-pager.

Your own letters, darling, are a joy to read. I only regret that time does not permit me to answer them individually. They are written on your new personalized stationary and are very neat. I'm hoping you get the typewriter repaired soon—then you will be able to write so much more on each sheet. It is now 9:30 and there are still some things I have to do in preparation for tomorrow when I'm leaving from London to meet Eddie (I hope). I know you will understand, Sweet, if I don't take the necessary time to answer your letters in the manner to which you are accustomed at this unfavorable time. I hope to get the opportunity within the next few days in London. I'll do better than that—I hereby promise to make the opportunity.

Before I sign off, and in order to keep this letter from being a complete “washout,” I’ll give you the “news of the day.”

As you know, last night I was CQ. One of my duties on this detail is to awaken everyone at 6:30; anyone who wants breakfast badly enough to climb out from under the warm blankets to get it, arises at that time. The others continue to sleep until about 7:30. I don't have to tell you in which category I belong—. Who ya callin’ lazy? I just don't like breakfast! All right, let's not argue the point or I'll never get on with the rest of the story. Anyhow, in order to insure that I get up in time to wake the others, I tell the operator to give me a ring at 6:15. I was on South St. trying to buy myself a suit of civilian clothes (with one buck in my pocket) when I was suddenly aware that the operator was making desperate efforts to rouse me. When I “came to” and heard – – – on the phone bell, I realized that it was the operator’s gesture to signify that he was giving it up as a bad job. I tumbled out hastily (br-r-r-r!) and answered the phone. Then, still shivering, I scrambled into my clothes and made the rounds of the huts and awoke all the men. That was the beginning of a day that was, to all intents and purposes, exactly the same as some other hundred days in the ETO. Even the weather was typical (if’n you know what I mean). The only dissimilarity from most other days occured about 4 P.M. when I received those six scrumptious letters (Which is where I came in). And now it's almost 10 o'clock—and I must run—but not before I say to you and the punkin and the family—I love you all. (But especially you, my Sweet).