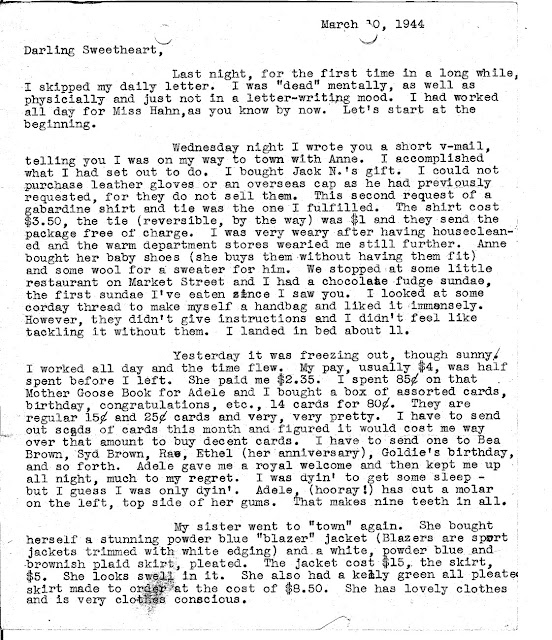 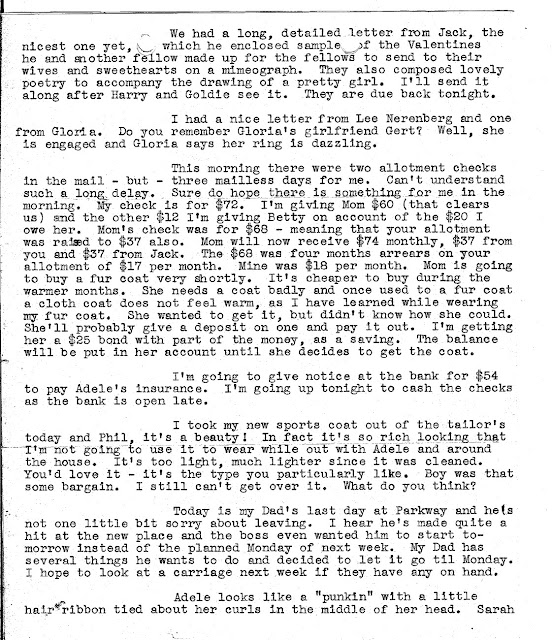 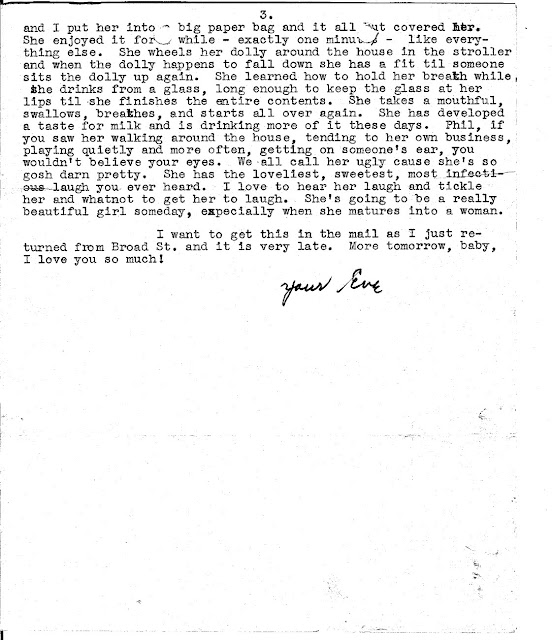 Last night, for the first time in a long while, I skipped my daily letter. I was "dead" mentally, as well as, physically and just not in a letter-writing mood. I had worked all day for Miss Hahn, as you know by now. Let's start at the beginning.

Wednesday night I wrote you a short v-mail, telling you I was on my way to town with Anne. I accomplished what I had set out to do. I bought Jack N.'s gift. I could not purchase leather gloves, or an overseas cap as he had previously requested, for they do not sell them. This second request of a gabardine shirt and tie was the one I fulfilled. The shirt cost $3.50, the tie (reversible, by the way) was $1 and they send the package free of charge. I was very weary after having housecleaned and the warm department stores wearied me still further. Anne bought her baby shoes (she buys them without having them fit) and some wool for a sweater for him. We stopped at some little restaurant on Market Street and I had a chocolate fudge sundae, the first sundae I've eaten since I saw you. I looked at some corday thread to make myself a handbag and liked it immensely. However, they didn't give instructions and I didn't feel like tackling it without them. I landed in bed about 11.

Yesterday it was freezing out, though sunny. I worked all day and the time flew. My pay, usually $4, was half spent before I left. She paid me $2.35. I spent 85¢ on that Mother Goose Book for Adele and I bought a box of assorted cards, birthday, congratulations, etc., 14 cards for 80¢. They are regular 15¢ and 25¢ cards and very, very pretty. I have to send out scąds of cards this month and figured it would cost me way over that amount to buy decent cards. I have to send one to Bea Brown, Syd Brown, Rae, Ethel (her anniversary), Goldie's birthday, and so forth. Adele gave me a royal welcome and then kept me up all night, much to my regret. I was dyin' to get some sleep but I guess I was only dyin'. Adele, (hooray!) has cut a molar on the left, top side of her gums. That makes nine teeth in all.

My sister went to "town" again. She bought herself a stunning powder blue "blazer" jacket (Blazers are sport-jackets trimmed with white edging) and a white, powder blue and brownish plaid skirt, pleated. The jacket cost $15, the skirt, $5. She looks swell in it. She also had a kelly green all pleated skirt made to order at the cost of $8.50. She has lovely clothes and is very clothes conscious.

We had a long, detailed letter from Jack, the nicest one yet, in which he enclosed sample of the Valentines he and another fellow made up for the fellows to send to their wives and sweethearts on a mimeograph. They also composed lovely poetry to accompany the drawing of a pretty girl. I'll send it along after Harry and Goldie see it. They are due back tonight.

I had a nice letter from Lee Nerenberg and one from Gloria. Do you remember Gloria's girlfriend Gert? Well, she is engaged and Gloria says her ring is dazzling.

This morning there were two allotment checks in the mail - but - three mailless days for me. Can't understand such a long delay. Sure do hope there is something for me in the morning. My check is for $72. I'm giving Mom $60 (that clears us) and the other $12 I'm giving Betty on account of the $20 I owe her. Mom's check was for $68 - meaning that your allotment was raised to $37 also. Mom will now receive $74 monthly, $37 from you and $37 from Jack. The $68 was four months arrears on your allotment of $17 per month. Mine was $18 per month. Mom is going to buy a fur coat very shortly. It's cheaper to buy during the warmer months. She needs a coat badly and once used to a fur coat

a cloth coat does not feel warm, as I have learned while wearing my fur coat. She wanted to get it, but didn't know how she could. She'll probably give a deposit on one and pay it out. I'm getting her a $25 bond with part of the money, as a saving. The balance will be put in her account until she decides to get the coat.

I'm going to give notice at the bank for $54 to pay Adele's Insurance. I'm going up tonight to cash the checks as the bank is open late.

I took my new sports coat out of the tailor’s today and Phil, it's a beauty! In fact it's so rich looking that I'm not going to use it to wear while out with Adele and around the house. It's too light, much lighter since it was cleaned. You'd love it - it's the type you particularly like. Boy was that some bargain. I still can't get over it. What do you think?

Today is my Dad's last day at Parkway and he's not one little bit sorry about leaving. I hear he’s made quite a hit at the new place and the boss even wanted him to start tomorrow instead of the planned Monday of next week. My Dad has several things he wants to do and decided to let it go til Monday.

I hope to look at a carriage next week if they have any on hand.

Adele looks like a "punkin' with a little hair ribbon tied about her curls in the middle of her head. Sarah and I put her into a big paper bag and it all but covered her. She enjoyed it for while - exactly one minute - like every thing else. She wheels her dolly around the house in the stroller and when the dolly happens to fall down she has a fit til someone sits the dolly up again. She learned how to hold her breath while she drinks from a glass, long enough to keep the glass at her lips til she finishes the entire contents. She takes a mouthful, swallows, breathes, and starts all over again. She has developed a taste for milk and is drinking more of it these days. Phil, if you saw her walking around the house, tending to her own business, playing quietly and more often, getting on someone's ear, you wouldn't believe your eyes. We all call her ugly cause she's so gosh darn pretty. She has the loveliest, sweetest, most infectious laugh you ever heard. - I love to hear her laugh and tickle her and whatnot to get her to laugh. She's going to be a really beautiful girl someday, especially when she matures into a woman.

I want to get this in the mail as I just returned from Broad St. and it is very late. More tomorrow, baby, I love you so much!