Post #318 - March 12, 1944 It is Sunday, and an Unauthorized and Unofficial Lethargy Pervades the Atmosphere and A Letter from Eddie Paller 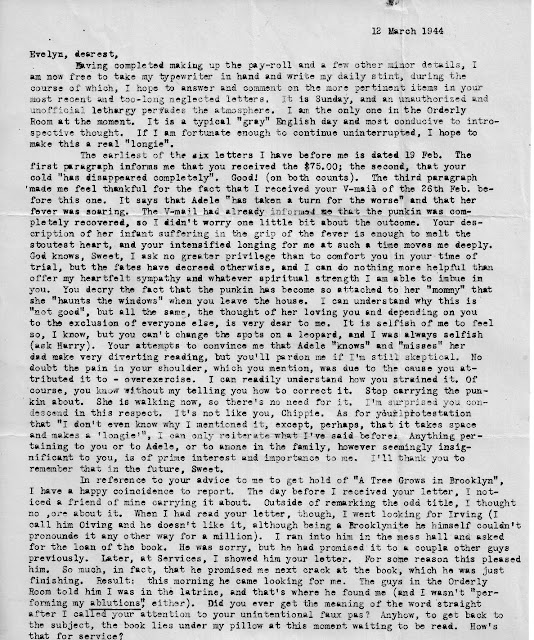 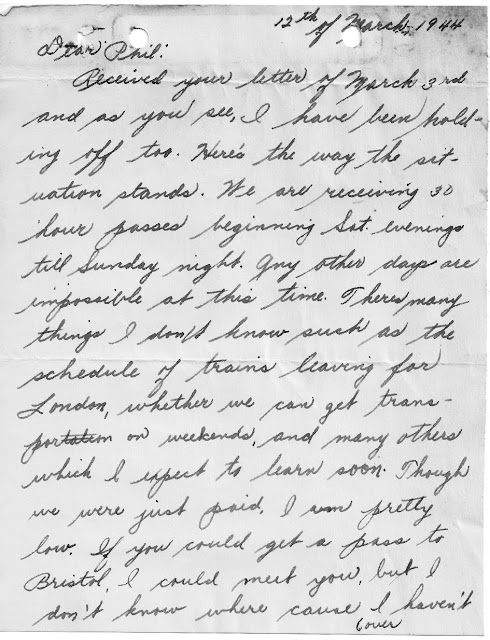 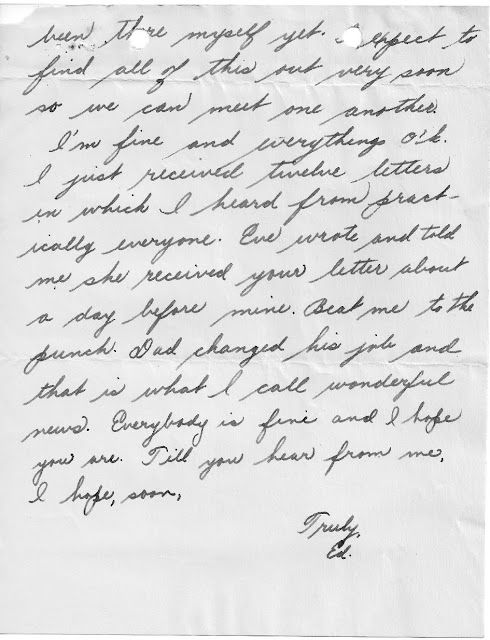 Having completed making up the pay-roll and a few other minor details, I am now free to take my typewriter in hand and write my daily stint, during the course of which, I hope to answer and comment on the more pertinent items in your most recent and too-long neglected letters. It is Sunday, and an unauthorized and unofficial lethargy pervades the atmosphere. I am the only one in the Orderly Room at the moment. It is a typical "gray” English day and most conducive to introspective thought. If I am fortunate enough to continue uninterrupted, I hope to make this a real "longie".

The earliest of the six letters I have before me is dated 19 Feb. The first paragraph informs me that you received the $75.00; the second, that your cold "has disappeared completely". Good! (on both counts). The third paragraph made me feel thankful for the fact that I received your V-mail of the 26th Feb, before this one. It says that Adele "has taken a turn for the worse and that her fever was soaring.” The V-mail had already informed me that the punkin was completely recovered, so I didn't worry one little bit about the outcome. Your description of her infant suffering in the grip of the fever is enough to melt the stoutest heart, and your intensified longing for me at such a time moves me deeply. God knows, Sweet, I ask no greater privilege than to comfort you in your time of trial, but the fates have decreed otherwise, and I can do nothing more helpful than offer my heartfelt sympathy and whatever spiritual strength I am able to imbue in you. You decry the fact that the punkin has become so attached to her "mommy" that she "haunts the windows" when you leave the house. I can understand why this is not good", but all the same, the thought of her loving you and depending on you to the exclusion of everyone else, is very dear to me. It is selfish of me to feel so, I know, but you can't change the spots on a leopard, and I was always selfish (ask Harry). Your attempts to convince me that Adele “knows" and "misses" her dad make very diverting reading, but you'll pardon me if I'm still skeptical. No doubt the pain in your shoulder, which you mention, was due to the cause you attributed it to - overexercise. I can readily understand how you strained it. Of course, you know without my telling you how to correct it. Stop carrying the punkin about. She is walking now, so there's no need for it. I'm surprised you condescend in this respect. It's not like you, Chippie. As for your protestation that "I don't even know why I mentioned it, except, perhaps, that it takes space and makes a "longie!", I can only reiterate what I've said before: Anything pertaining to you or to Adele, or to anyone in the family, however seemingly insignificant to you, is of prime interest and importance to me, I'll thank you to remember that in the future, Sweet.

In reference to your advice to me to get hold of "A Tree Grows in Brooklyn", I have a happy coincidence to report. The day before I received your letter, I noticed a friend of mine carrying it about. Outside of remarking the odd title, I thought no more about it. When I had read your letter, though, I went looking for Irving (I call him Oiving and he doesn't like it, although being a Brooklynite he himself couldn't pronounce it any other way for a million). I ran into him in the mess hall and asked for the loan of the book. He was sorry, but he had promised it to a coupla other guys previously. Later, at Services, I showed him your letter. For some reason this pleased him. So much, in fact, that he promised me next crack at the book, which he was just

finishing. Result: this morning he came looking for me. The guys in the Orderly Room told him I was in the latrine, and that's where he found me (and I wasn't performing my ablutions, either). Did you ever get the meaning of the word straight after I called your attention to your unintentional faux pas? Anyhow, to get back to the subject, the book lies under my pillow at this moment waiting to be read. How's that for service?

Those "jokes" of Rae's which you wasted your good time writing out for my edification (without being prudish about it) were vulgar rather than funny, and I'm afraid they were entirely wasted on me, Besides, I had heard them all years ago. If I thought them worth-while I would have told them to you myself long before this. Most important, though - I don't relish the picture of either you or Mom listening to that sort of tripe, much less recounting it. You know, I think, that I am not entirely devoid of a sense of humor, and that I enjoy a joke, however "dirty” just as much as the next guy (perhaps more), but I'll be damned if I can stomach out and out vulgarity in any way, shape or form. You knew this, too, Chippie, I'm sure, but I don't think you entirely understand the sort of thing I put in this category. So, just to make sure you don't lower yourself that way again (and it's most unbecoming to my conception of you), please refrain from repeating the “jokes" some misguided person tells you. I assure you that my buddies see to it that I am "up" on the latest and best of the so-called "dirty” jokes. Your effort to help out in this respect, while appreciated, is in the nature of "carrying coals to Newcastle". So much for yours of the 19th - and mine of the 12th. Just as I expected, there was no mail for me today. I'll continue tomorrow, when I will "deal" with your letter of 22 Feb.

Lest I end this on a “sour note", I hasten to assure you, darling, that I don't think any the less of you for a mere misconception on your part. You are the sweetest of women, in my eyes. I just want to keep you that way. Love to all from

Phil
12th of March 1944
Dear Phil:
Received your letter of March 3rd, and as you see, I have been holding off too. Here's the way the situation stands. We're receiving 30 hour passes beginning Saturday evenings till Sunday night. Any other days are impossible at this time. There's many things I don't know, such as the schedule of trains leaving for London, whether we can get transportation on weekends and many others, which I expect to learn soon. Though we were just paid, I am pretty low. If you could get a pass to Bristol I could meet you, but I don't know where 'cause I haven't been down there myself yet. I expect to find all of this out very soon so we can meet one another. I'm fine and everything's O.K. I just received 12 letters in which I heard from practically everyone. Eve wrote and told me she received your letter about a day before mine. Beat me to the punch. Dad changed his job and that is what I call wonderful news. Everybody is fine and I hope you are. Till you hear from me, I hope, soon,
Truly,
Ed