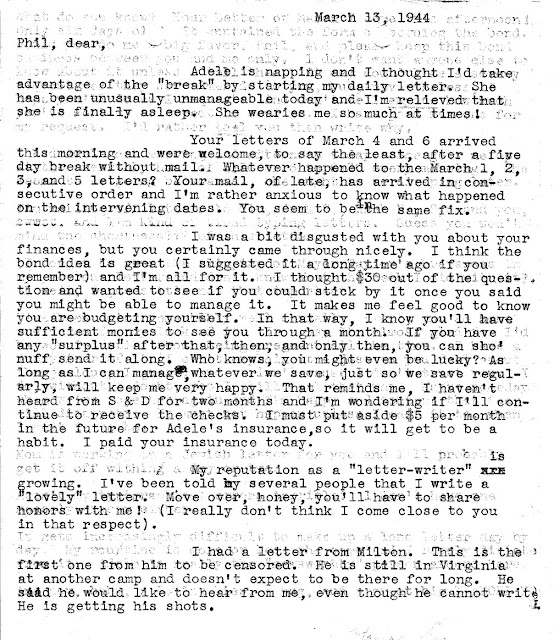 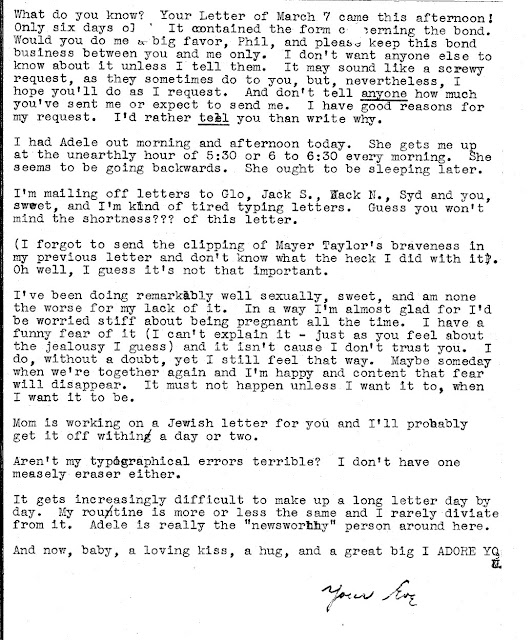 Adele is napping and I thought I'd take advantage of the “break” by starting my daily letter. She has been unusually unmanageable today and I’m relieved that she is finally asleep. She wearies me so much at times!

Your letters of March 4 and 6 arrived this morning and were welcome, to say the least, after a five day break without mail. Whatever happened to the March 1, 2, 3, and 5 letters? Your mail, of late, has arrived in consecutive order and I'm rather anxious to know what happened on the intervening dates. You seem to be in the same fix.

I was a bit disgusted with you about your finances, but you certainly came through nicely. I think the bond idea is great (I suggested it a long time ago if you remember) and I'm all for it. I thought $30 out of the question and wanted to see if you could stick by it once you said you might be able to manage it. It makes me feel good to know you are budgeting yourself. In that way, I know you'll have sufficient monies to see you through a month. If you have any “surplus" after that, then, and only then, you can sho’ nuff send it along. Who knows, you might even be lucky? As long as I can manage, whatever we save, just so we save regularly, will keep me very happy. That reminds me, I haven't heard from S(harpe) & D(ohme) for two months and I'm wondering if I’ll continue to receive the checks. I must to put aside $5 per month In the future for Adele's insurance, so it will get to be a habit. I paid your insurance today.

My reputation as a "letter-writer" is growing. I’ve been told by several people that I write a “lovely" letter. Move over, honey, you'll have to share honors with me (I really don't think I come close to you in that respect).

I had a letter from Milton. This is the first one from him to be censored. He is still in Virginia at another camp and doesn't expect to be there for long. He said he would like to hear from me, even thought he cannot write. He is getting his shots.

What do you know? Your letter of March 7 came this afternoon! Only six days old. It contained the form concerning the bond. Would you do me a big favor, Phil, and please keep this bond business between you and me only. I don't want anyone else to know about it unless I tell them. It may sound like a screwy request, as they sometimes do to you, but, nevertheless, I hope you'll do as I request. And don't tell anyone how much you've sent me or expect to send me. I have good reasons for my request. I'd rather tell you than write why.

I had Adele out morning and afternoon today. She gets me up at the unearthly hour of 5:30 or 6 to 6:30 every morning. She seems to be going backwards. She ought to be sleeping later.

I'm mailing off letters to Glo, Jack S., Jack N., Syd and you, sweet, and I'm kind of tired typing letters. Guess you won't mind the shortness??? of this letter.

don't know what the heck I did with it). Oh well, I guess it's not that important.

I've been doing remarkably well sexually, sweet, and am none the worse for my lack of it. In a way I'm almost glad for I'd be worried stiff about being pregnant all the time. I have a funny fear of it (I can't explain it - just as you feel about the jealousy I guess) and it isn't cause I don't trust you. I do, without a doubt, yet I still feel that way. Maybe someday when we're together again and I'm happy and content that fear will disappear. It must not happen unless I want it to, when I want it to be.

Mom is working on a Jewish letter for you and I'll probably get it off within a day or two.

Aren't my typographical errors terrible? I don't have one measly eraser either.

It gets increasingly difficult to make up a long letter day by day. My routine is more or less the same and I rarely deviate from it. Adele is really the "newsworthy" person around here. And now, baby, a loving kiss, a hug, and a great big I ADORE YOU.