Post #323 - March 18, 1944 There is a Calm and Peaceful Air About this Place that Somehow Seems Incongruous with Its Purpose 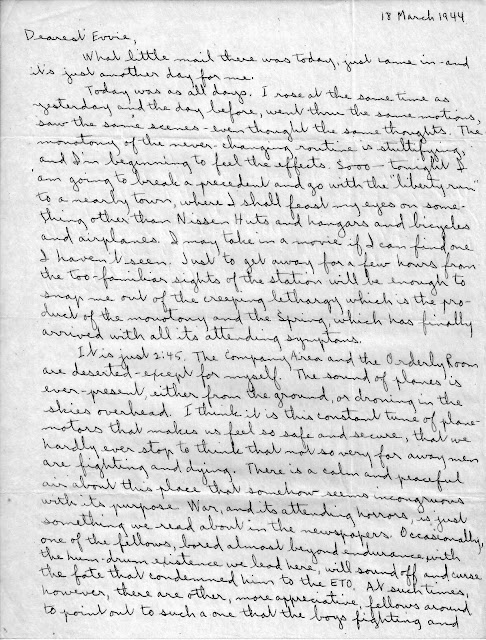 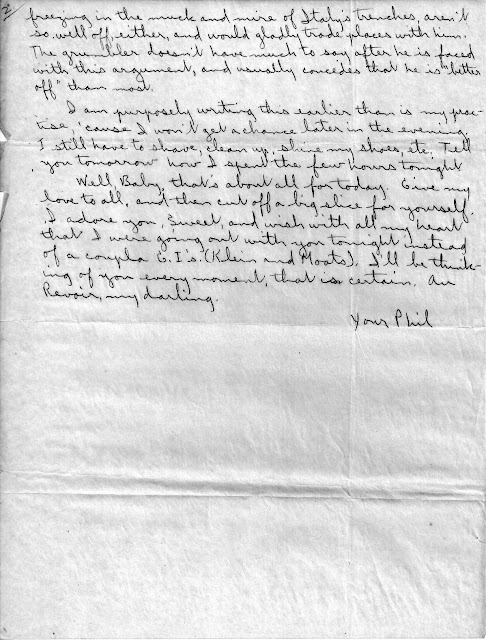 March 18, 1944.
Dearest Evvie,
What little mail there was today just came in, and it's just another day for me.
Today was as all days. I rose at the same time as yesterday and the day before, went through the same motions, saw the same scenes, even thought the same thoughts. The monotony of the never-changing routine is stultifying, and I'm beginning to feel the effects. Sooo—tonight I am going to break a precedent and go with the “liberty run” to a nearby town where I shall feast my eyes on something other than Nissen Huts and hangers and bicycles and airplanes. I may take an in a movie if I can find one I haven't seen. Just to get away for a few hours from the too-familiar sights of the station will be enough to snap me out of the creeping lethargy which is the product of the monotony and the Spring, which has finally arrived with all its attending symptoms.
It's just 2:45. The Company Area and the Orderly Room are deserted—except for myself. The sound of planes is ever-present either from the ground or droning in the skies overhead. I think it is this constant tune of plane motors that makes us feel so safe and secure that we hardly ever stop to think that not so far away men are fighting and dying. There is a calm and peaceful air about this place that somehow seems incongruous with its purpose. War and its attending horrors is just something we read about in the newspapers. Occasionally one of the fellows, bored almost beyond endurance with the humdrum existence we lead here, will sound off and curse the fate that condemned him to the ETO. At such times, however, there are other more appreciative fellows around to point out to such a one that the boys fighting and freezing in the muck and mire of Italy's trenches aren't so well off either and would gladly trade places with him. The grumbler doesn't have much to say after he is faced with this argument, and usually concedes that he is “better off” than most.
I am purposely writing this earlier than is my practice 'cause I won't get a chance later in the evening. I still have to shave, clean up, shine my shoes, etc. Tell you tomorrow how I spent the few hours tonight.
Well baby, that's about all for today. Give my love to all and then cut off a big slice for yourself. I adore you, Sweet, and wish with all my heart that I were going out with you tonight instead of a couple of G.I.’s (Klein and Moats). I'll be thinking of you every moment, that is certain. Au Revoir, my darling.
Your Phil
Posted by Marilyn at 12:02 PM