Post #324 - March 19, 1944 Ethel Went to the Hospital for 24 Hours, But It Was a False Alarm and I Hope You Aren’t One of Those Dizzy Females that Swoons When Frank Sinatra Croons 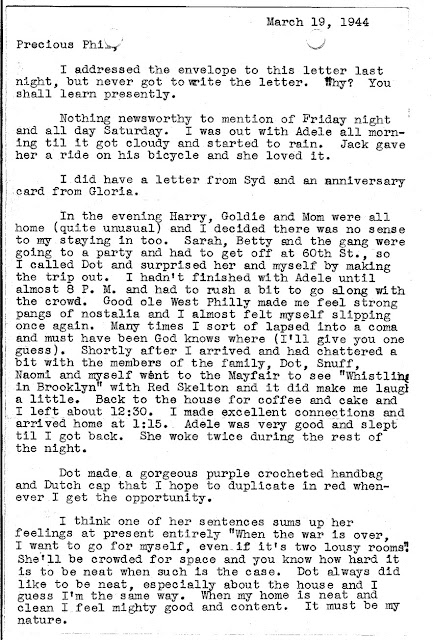 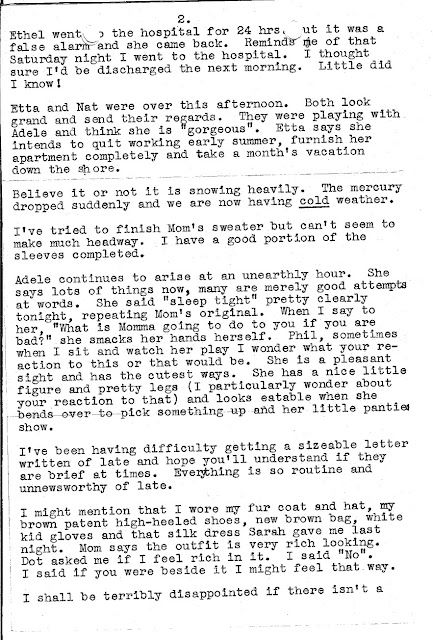 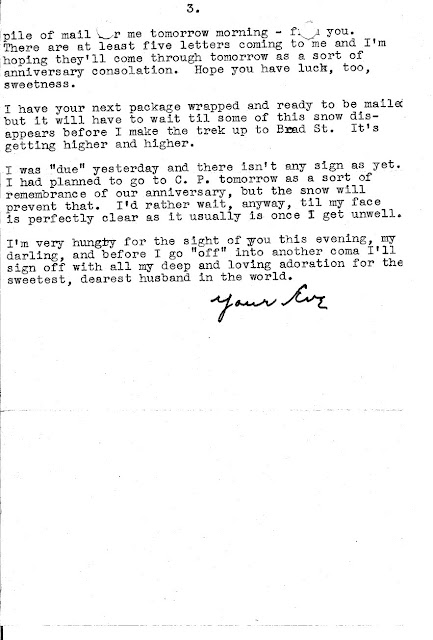 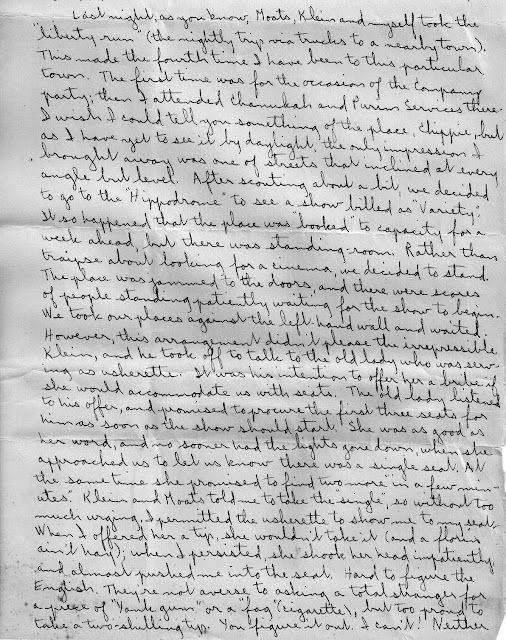 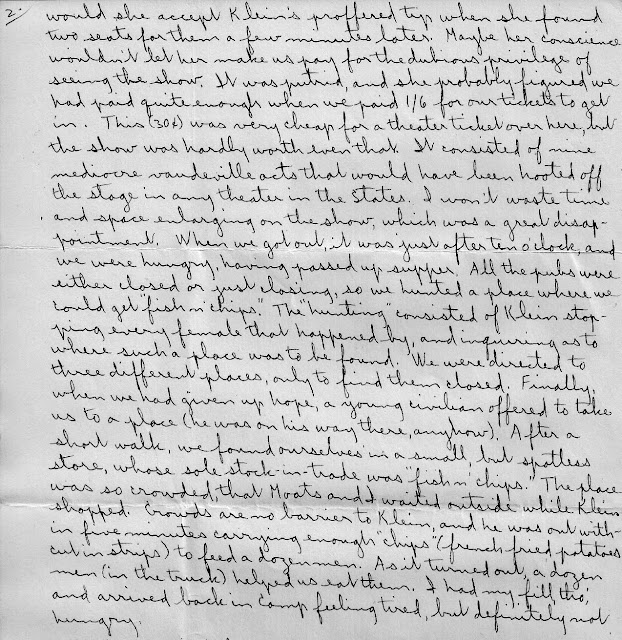 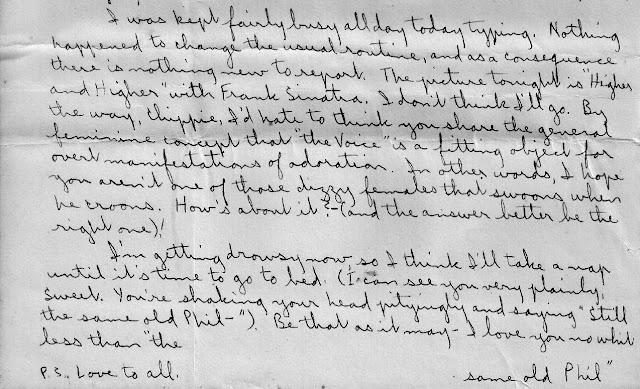 I addressed the envelope to this letter last night, but never got to write the letter. Why? You shall learn presently.

Nothing newsworthy to mention of Friday night and all day Saturday. I was out with Adele all morning til it got cloudy and started to rain. Jack gave her a ride on his bicycle and she loved it.

I did have a letter from Syd and an anniversary card from Gloria.

In the evening Harry, Goldie and Mom were all home (quite unusual) and I decided there was no sense to my staying in too. Sarah, Betty and the gang were going to a party and had to get off at 60th St., so I called Dot and surprised her and myself by making the trip out. I hadn't finished with Adele until almost 8 P.M. and had to rush a bit to go along with the crowd. Good ole West Philly made me feel strong pangs of nostalgia and I almost felt myself slipping once again. Many times I sort of lapsed into a coma and must have been God knows where (I'll give you one guess). Shortly after I arrived and had chattered a bit with the members of the family, Dot, Snuff, Naomi and myself went to the Mayfair to see "Whistling in Brooklyn" with Red Skelton and it did make me laugh a little. Back to the house for coffee and cake and I left about 12:30. I made excellent connections and arrived home at 1:15. Adele was very good and slept til I got back. She woke twice during the rest of the night.

Dot made, a gorgeous purple crocheted handbag and Dutch cap that I hope to duplicate in red whenever I get the opportunity.

I think one of her sentences sums up her feelings at present entirely "When the war is over, I want to go for myself, even if it's two lousy rooms!” She'll be crowded for space and you know how hard it is to be neat when such is the case. Dot always did like to be neat, especially about the house and I guess I'm the same way. When my home is neat and clean I feel mighty good and content. It must be my nature.

Ethel went the hospital for 24 hrs. but it was a false alarm and she came back. Reminds me of that Saturday night I went to the hospital. I thought sure I'd be discharged the next morning. Little did I know!

Etta and Nat were over this afternoon. Both look grand and send their regards. They were playing with Adele and think she is "gorgeous". Etta says she intends to quit working early summer, furnish her apartment completely and take a month's vacation down the shore.

Believe it or not it is snowing heavily. The mercury dropped suddenly and we are now having cold weather.

I've tried to finish Mom's sweater but can't seem to make much headway. I have a good portion of the sleeves completed.

Adele continues to arise at an unearthly hour. She says lots of things now, many are merely good attempts at words. She said "sleep tight" pretty clearly tonight, repeating Mom's original. When I say to her, "What is Momma going to do to you if you are bad?" she smacks her hands herself. Phil, sometimes when I sit and watch her play I wonder what your reaction to this or that would be. She is a pleasant sight and has the cutest ways. She has a nice little figure and pretty legs (I particularly wonder about your reaction to that) and looks eatable when she bends over to pick something up and her little panties show.

I've been having difficulty getting a sizable letter written of late and hope you'll understand if they are brief at times. Everything is so routine and unnewsworthy of late.

I might mention that I wore my fur coat and hat, my brown patent high-heeled shoes, new brown bag, white kid gloves and that silk dress Sarah gave me last night. Mom says the outfit is very rich looking. Dot asked me if I feel rich in it. I said "No". I said if you were beside it I might feel that way.

I shall be terribly disappointed if there isn't a pile of mail for me tomorrow morning - from you. There are at least five letters coming to me and I'm hoping they'll come through tomorrow as a sort of anniversary consolation. Hope you have luck, too, sweetness.

I have your next package wrapped and ready to be mailed but it will have to wait til some of this snow disappears before I make the trek up to Broad St. It's getting higher and higher.

I was "due" yesterday and there isn't any sign as yet. I had planned to go to C(lare). P(ruett). tomorrow as a sort of remembrance of our anniversary, but the snow will

prevent that. I'd rather wait, anyway, til my face is perfectly clear as it usually is once I get unwell.

I'm very hungry for the sight of you this evening, my darling, and before I go "off" into another coma I’ll sign off with all my deep and loving adoration for the sweetest, dearest husband in the world.

Still “sweating out” the jack-pot. The only letter today's mail brought me was one from Eddie dated 12 March. He was unable to set a date for another meeting 'cause they're only allowed 30-hour passes—and then only on week-ends. He is, as yet, unfamiliar with train schedules, etc., and doesn't quite know whether he can manage it or not. In closing, he asked me to sit tight until he could get more definite information.

Last night, as you know, Moats, Klein and myself took the “liberty run” (the nightly trip via trucks to a nearby town). This made the fourth time I have been to this particular town. The first time was for the occasion of the company party; then I attended Chanukah and Purim Services there. I wish I could tell you something of the place, Chippie, but as I have yet to see it by daylight, the only impression I brought away was one of streets that inclined at every angle but level. After scouting about a bit, we decided to go to the “Hippodrome” to see a show billed as “Variety.” It so happened that the place was “booked” to capacity for a week ahead, but there was standing-room. Rather than traipse about looking for a cinema, we decided to stand. The place was jammed to the doors, and there were scores of people standing patiently waiting for the show to begin. We took our places against the left-hand wall and waited. However, this arrangement didn't please the irrepressible Klein, and he took off to talk to the old lady who was serving as usherette. It was his intention to offer her a bribe if she would accommodate us with seats. The old lady listened to his offer, and promised to procure the first three seats for him as soon as the show should start. She was as good as her word, and no sooner had the lights gone down, when she approached us to let us know there was a single seat. At the same time, she promised to find two more in a few minutes. Klein and Moats told me to take the single, so without too much urging I permitted the usherette to show me to my seat. When I offered her a tip, she wouldn't take it (and a florin ain't hay); when I persisted, she shook her head impatiently and almost pushed me into the seat. Hard to figure the English. They're not averse to asking a total stranger for a piece of “Yank gum” or a “fag” (cigarette), but too proud to take a two-shilling tip. You figure it out. I can't! Neither would she accept Klein’s proffered tip when she found two seats for them a few minutes later. Maybe her conscience wouldn't let her make us pay for the dubious privilege of seeing the show. It was putrid, and she probably figured we had paid quite enough when we paid 1/6 for our tickets to get in. This (30¢) was very cheap for a theater ticket over here, but the show was hardly worth even that. It consisted of nine mediocre vaudeville acts that would have been hooted off the stage in any theater in the States. I won't waste time and space enlarging on the show, which was a great disappointment. When we got out, it was just after ten o'clock, and we were hungry, having passed up supper. All the pubs were either closed or just closing. So we hunted a place where we could get “fish n’ chips.” The “hunting” consisted of Klein stopping every female that happened by, and inquiring as to where such a place was to be found. We were directed to three different places, only to find them closed. Finally, when we had given up hope, a young civilian offered to take us to a place (he was on his way there, anyhow). After a short walk, we found ourselves in a small, but spotless store, whose sole stock-in-trade was “fish n’ chips.” The place was so crowded that Moats and I waited outside while Klein shopped. Crowds are no barrier to Klein, and he was out within 5 minutes carrying enough “chips” (french-fried potatoes cut in strips) to feed a dozen men. As it turned out, a dozen men (in the truck) helped us eat them. I had my fill, though, and arrived back in Camp feeling tired, but definitely not hungry.

I was kept fairly busy all day today typing. Nothing happened to change the usual routine and, as a consequence, there is nothing new to report. The picture tonight is “Higher and Higher” with Frank Sinatra. I don't think I'll go. By the way, Chippie, I’d hate to think you share the general feminine concept that “the Voice” is a fitting object for overt manifestations of adoration. In other words, I hope you aren't one of those dizzy females that swoons when he croons. How about it?—(and the answer better be the right one)!

I'm getting drowsy now, so I think I'll take a nap until it's time to go to bed. (I can see you very plainly, Sweet. You're shaking your head pityingly and saying “Still the same old Phil—”). Be that as it may—I love you no whit less than “the