Post #325 - March 20, 1944 I Feel as Though I’ve Matured in Those Three Years Into Womanhood and Our Love has been Tested in the Harsh Crucible of War 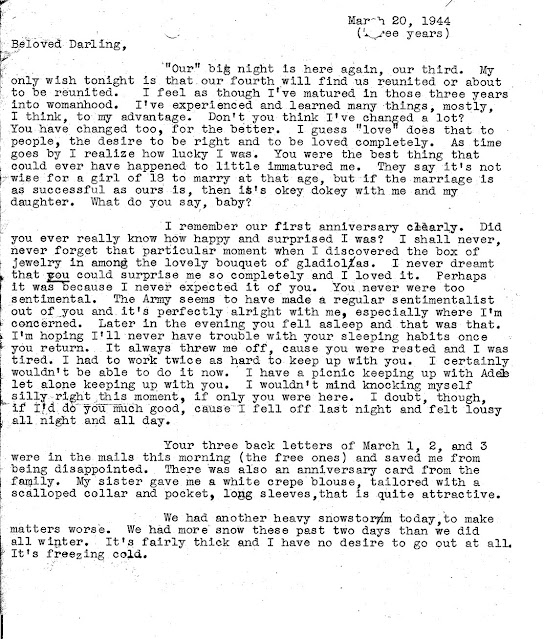 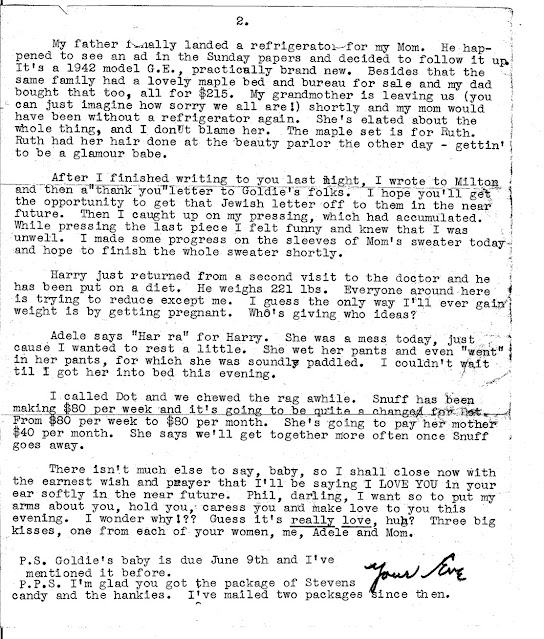 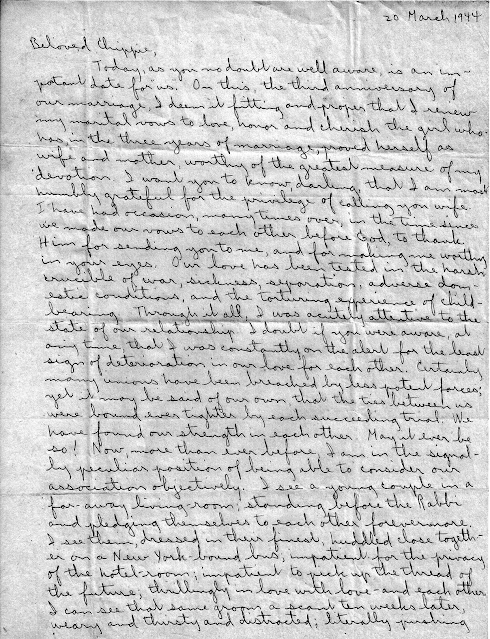 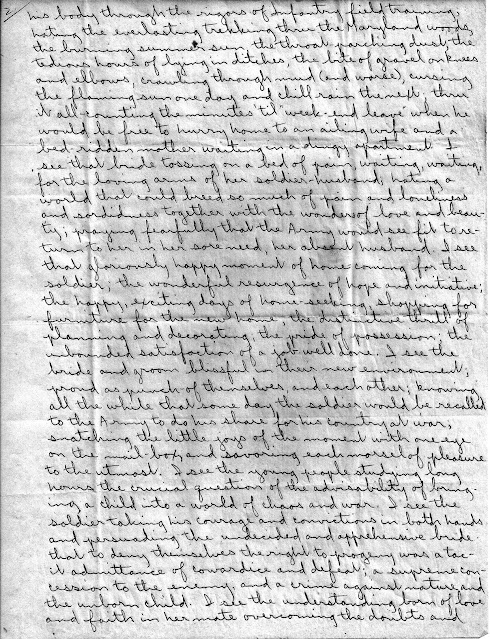 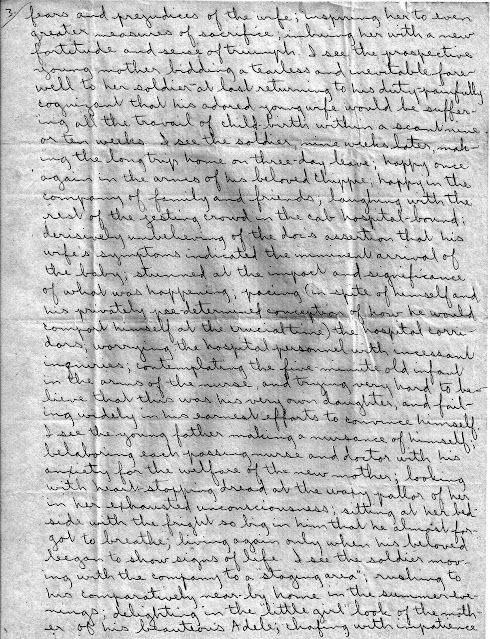 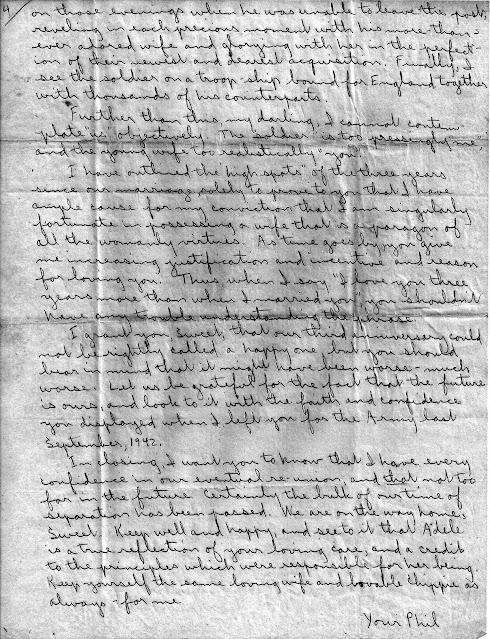 "Our" big night is here again, our third. My only wish tonight is that our fourth will find us reunited or about to be reunited. I feel as though I've matured in those three years into womanhood. I've experienced and learned many things, mostly, I think, to my advantage. Don't you think I've changed a lot? You have changed too, for the better. I guess "love" does that to people, the desire to be right and to be loved completely. As time goes by, I realize how lucky I was. You were the best thing that could ever have happened to little immatured me. They say it's not wise for a girl of 18 to marry at that age, but if the marriage is as successful as ours is, then it's okey dokey with me and my daughter. What do you say, baby?

I remember our first anniversary clearly. Did you ever really know how happy and surprised I was? I shall never, never forget that particular moment when I discovered the box of jewelry in among the lovely bouquet of gladiolas. I never dreamt that you could surprise me so completely and I loved it. Perhaps it was because I never expected it of you. You never were too sentimental. The Army seems to have made a regular sentimentalist out of you and it's perfectly alright with me, especially where I'm concerned. Later in the evening you fell asleep and that was that. I'm hoping I'll never have trouble with your sleeping habits once you return. It always threw me off, cause you were rested and I was tired. I had to work twice as hard to keep up with you. I certainly wouldn't be able to do it now. I have a picnic keeping up with Adele let alone keeping up with you. I wouldn't mind knocking myself silly right this moment, if only you were here. I doubt, though, if I’d do you much good, cause I fell off last night and felt lousy all night and all day.

Your three back letters of March 1, 2, and 3 were in the mails this morning (the free ones) and saved me from being disappointed. There was also an anniversary card from the family. My sister gave me a white crepe blouse, tailored with a scalloped collar and pocket, long sleeves, that is quite attractive.

We had another heavy snowstorm today, to make matters worse. We had more snow these past two days than we did all winter. It's fairly thick and I have no desire to go out at all. It's freezing cold.

My father finally landed a refrigerator for my Mom. He happened to see an ad in the Sunday papers and decided to follow it up. It's a 1942 model G.E., practically brand new. Besides that, the same family had a lovely maple bed and bureau for sale and my dad bought that too, all for $215. My grandmother is leaving us (you can just imagine how sorry we all are!) shortly and my mom would have been without a refrigerator again. She's elated about the whole thing, and I don’t blame her. The maple set is for Ruth. Ruth had her hair done at the beauty parlor the other day - gettin' to be a glamour babe.

After I finished writing to you last might, I wrote to Milton and then a *thank you" letter to Goldie's folks. I hope you'll get the opportunity to get that Jewish letter off to them in the near future. Then I caught up on my pressing, which had accumulated. While pressing the last piece I felt funny and knew that I was unwell. I made some progress on the sleeves of Mom's sweater today and hope to finish the whole sweater shortly.

Harry just returned from a second visit to the doctor and he has been put on a diet. He weighs 221 lbs. Everyone around here is trying to reduce except me. I guess the only way I'll ever gain weight is by getting pregnant. Who's giving who ideas?

Adele says "Har ra" for Harry. She was a mess today, just cause I wanted to rest a little. She wet her pants and even "went" in her pants, for which she was soundly paddled. I couldn't wait til I got her into bed this evening.

There isn't much else to say, baby, so I shall close now with the earnest wish and prayer that I'll be saying I LOVE YOU in your ear softly in the near future. Phil, darling, I want so to put my arms about you, hold you, caress you and make love to you this evening. I wonder why!?? Guess it's really love, huh? Three big kisses, one from each of your women, me, Adele and Mom.

P.S. Goldie's baby is due June 9th and I've mentioned it before.

P.P.S. I'm glad you got the package of Stevens candy and the hankies. I've mailed two packages since then.

Further than this, my darling, I cannot contemplate “us” objectively. The soldier is too pressingly “me,” and the young wife too realistically “you.”

I have outlined the high spots of the three years since our marriage solely to prove to you that I have ample cause for my conviction that I am singularly fortunate in possessing a wife that's a paragon of all the womanly virtues. As time goes by, you give me Increasing justification and incentive and reason for loving you. Thus, when I say I love you three years more than when I married you, you shouldn't have any trouble understanding the phrase.

I grant you, Sweet, that our third anniversary could not be rightly called a happy one, but you should bear in mind that it might have been worse—much worse. Let us be grateful for the fact that the future is ours, and look to it with the faith and confidence you displayed when you when I left for the Army last September, 1942.

In closing, I want you to know that I have every confidence in our eventual re-union, and that, not too far in the future. Certainly the bulk of our time of separation has been passed. We are on the way home, Sweet. Keep well and happy and see to it that Adele is a true reflection of your loving care and a credit to the principles which were responsible for her being. Keep yourself the same loving wife and lovable Chippie as always—for me