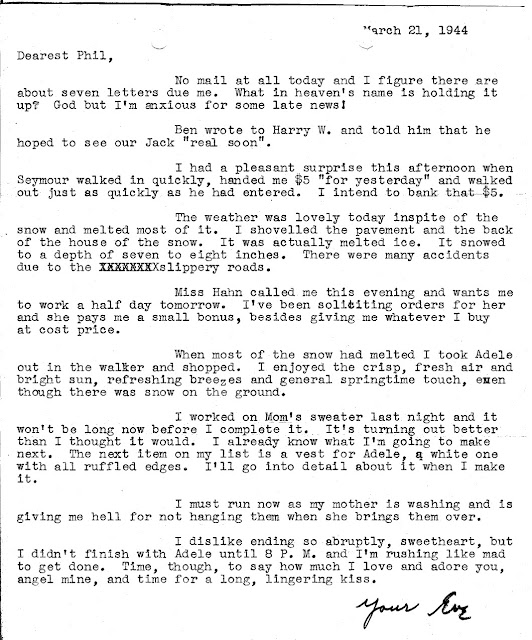 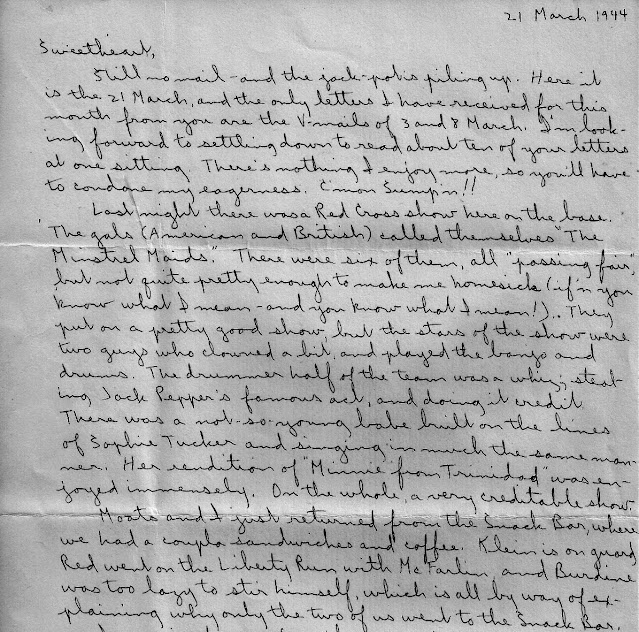 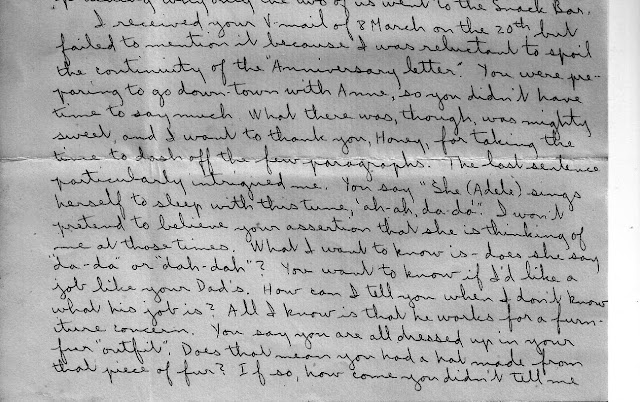 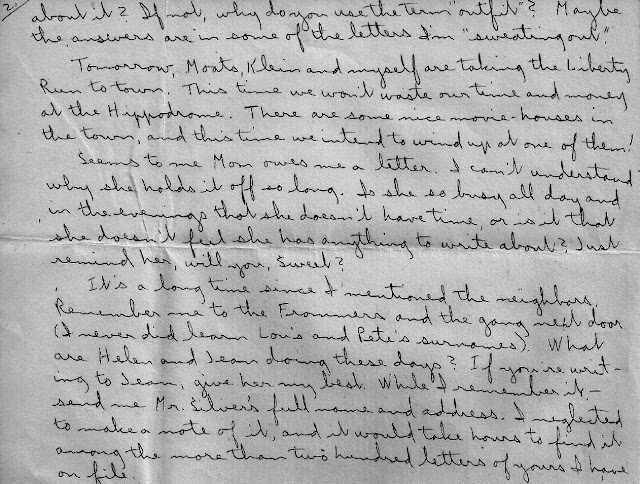 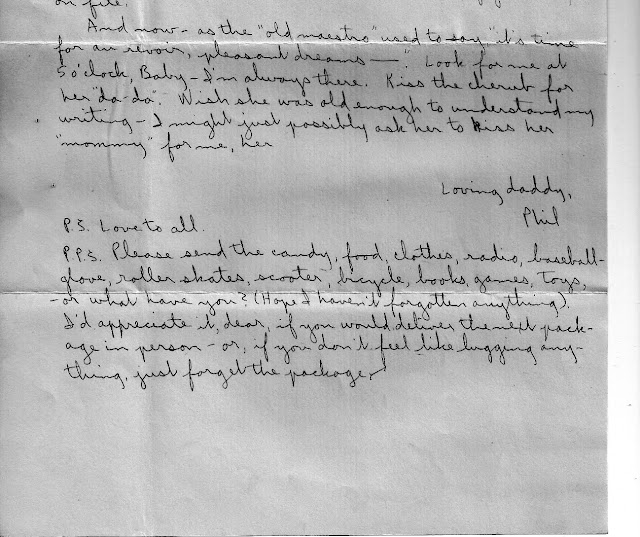 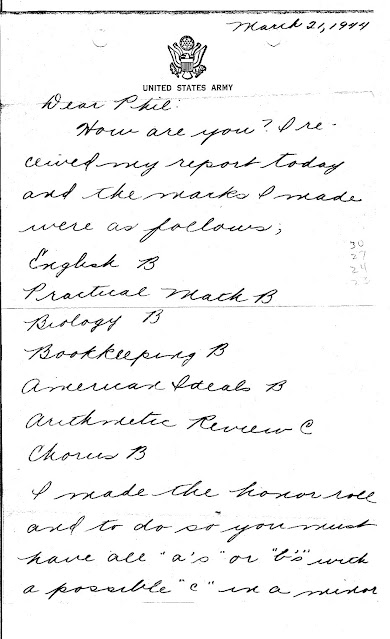 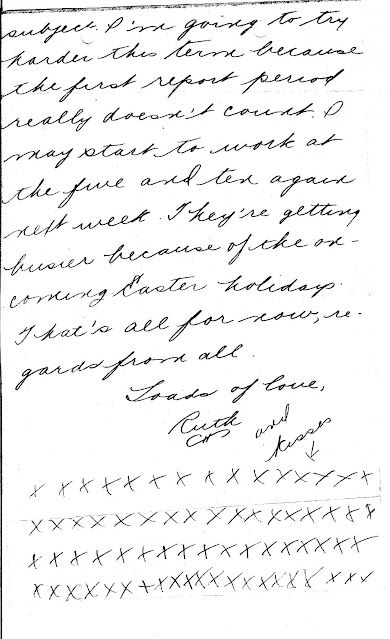 No mail at all today and I figure there are about seven letters due me. What in heaven's name is holding it up? God but I'm anxious for some late news!

Ben wrote to Harry W. and told him that he hoped to see our Jack "real soon".

I had a pleasant surprise this afternoon when Seymour walked in quickly, handed me $5 "for yesterday" and walked out just as quickly as he had entered. I intend to bank that $5.

The weather was lovely today in spite of the snow and melted most of it. I shoveled the pavement and the back of the house of the snow. It was actually melted ice. It snowed to a depth of seven to eight inches. There were many accidents due to the slippery roads.

Miss Hahn called me this evening and wants me to work a half day tomorrow. I've been soliciting orders for her and she pays me a small bonus, besides giving me whatever I buy at cost price.

When most of the snow had melted I took Adele out in the walker and shopped. I enjoyed the crisp, fresh air and bright sun, refreshing breezes and general springtime touch, even though there was snow on the ground.

I worked on Mom's sweater last night and it won't be long now before I complete it. It's turning out better than I thought it would. I already know what I'm going to make next. The next item on my list is a vest for Adele, a white one with all ruffled edges. I’ll go into detail about it when I make it.

I must run now as my mother is washing and is giving me hell for not hanging them when she brings them over.

I dislike ending so abruptly, sweetheart, but I didn't finish with Adele until 8 P.M. and I'm rushing like mad to get done. Time, though, to say how much I love and adore you, angel mine, and time for a long, lingering kiss.

Still no mail—and the jack-pot’s piling up. Here it is the 21 of March, and the only letters I have received for this month from you are the V-mails of 3 and 8 March. I'm looking forward to settling down to read about 10 of your letters at one sitting. There's nothing I enjoy more, so you'll have to condone my eagerness. C’mon Sump’n!!

Last night there was a Red Cross show here on the base. The gals (American and British) called themselves “The Minstrel Maids.” There were six of them, all passing fair, but not quite pretty enough to make me homesick (if’n you know what I mean—and you know what I mean!) They put on a pretty good show, but the stars of the show were two guys who clowned the bit and played the banjo and drums. The drummer half of the team was a whiz, stealing Jack Pepper’s famous act and doing it credit. There was a not-so-young babe built on the lines of Sophie Tucker and singing in much the same manner. Her rendition of “Minnie from Trinidad” was enjoyed immensely. On the whole, a very creditable show.

Moats and I just returned from the Snack Bar where we had a coupla sandwiches and coffee. Klein is on guard, Red went to the Liberty Run with McFarlin, and Burdine was too lazy to stir himself, which is all by way of explaining why only the two of us went to the Snack Bar.

I received your V-mail of 8 March on the 20th, but failed to mention it because I was reluctant to spoil the continuity of the “Anniversary letter.” You were preparing to go downtown with Anne, so you didn't have time to say much. What there was, though, was mighty sweet and I want to thank you, Honey, for taking the time to dash off the few paragraphs. The last sentence particularly intrigued me. You say “She (Adele) sings herself to sleep with this tune. “ah-ah, da-da.” I won't pretend to believe your assertion that she's thinking of me at those times. What I want to know is—does she say “da-da” or “dah-dah”? You want to know if I'd like a job like your Dad's? How can I tell you when I don't know what his job is? All I know is that he works for a furniture concern. You said that you were all dressed up in your fur “outfit.” Does that mean you had a hat made from that piece of fur? If so, how come you didn't tell me about it.? If not, why do you use the term “outfit”? Maybe the answers are in some of the letters I'm “sweating out.”

Tomorrow, Moats, Klein and myself are taking the Liberty Run to town. This time we won't waste our time and money at the Hippodrome. There are some nice movie houses in the town and this time we intend to wind up at one of them!

Seems to me Mom owes me a letter. I can't understand why she holds it off so long. Is she so busy all day and in the evenings that she doesn't have time, or is it that she doesn't feel she has anything to write about? Just remind her, will you, Sweet?

It's a long time since I mentioned the neighbors. Remember me to the Frommers and the gang next door (I never did learn Lou’s and Pete’s surnames.) What are Helen and Jean doing these days? If you're writing to Jean, give her my best. While I remember it—send me Mr. Silver's full name and address, I neglected to make a note of it and it would take hours to find it among the more than 200 letters of yours I have on file.

And now—as the “old maestro” used to say, “it's time for au revoir, pleasant dreams—” Look for me at 5:00 o'clock, Baby—I'm always there. Kiss the cherub for her “da-da.” Wish she was old enough to understand my writing—I might just possibly ask her to kiss her “mommy” for me, her

P.P.S. Please send the candy, food, clothes, radio, baseball glove, roller skates, scooter, bicycle, books, games, toys—or what have you? (Hope I haven't forgotten anything.) I'd appreciate it, dear, if you would deliver the next package in person—or, if you don't feel like lugging anything, just forget the packages.

How are you? I received my report today and the marks I made were as follows, English B

I made the honor roll and to do so you must have all “a’s” or “b’s” with a possible “c” in a minor subject. I'm going to try harder this term because the first report really doesn't count. I may start to work at the five and ten again next week. They're getting busier because of the oncoming Easter holidays. That's all for now, regards from all.

Loads of love and kisses