Post #327 - March 22, 23, 1944 I Kept Remembering Too Much Today and I Saw Some of the Pilots on This Base Receive the DFC and Other Decorations 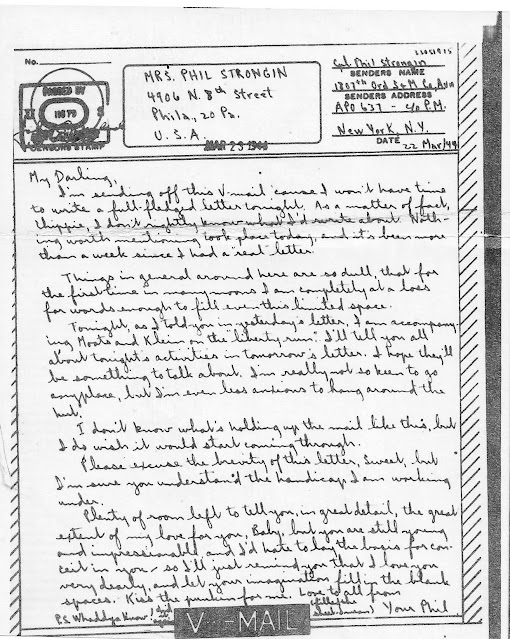 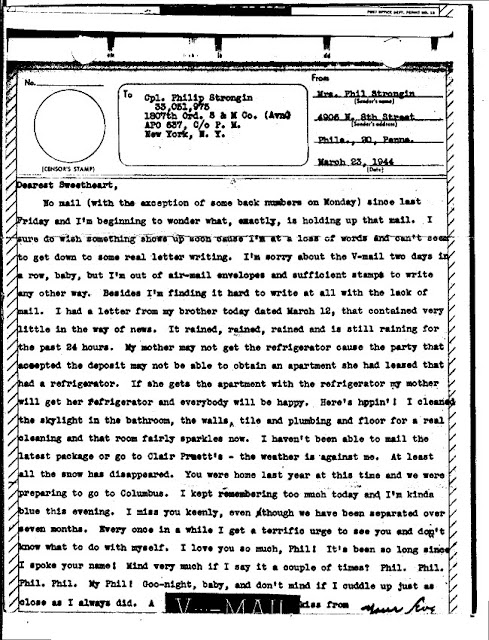 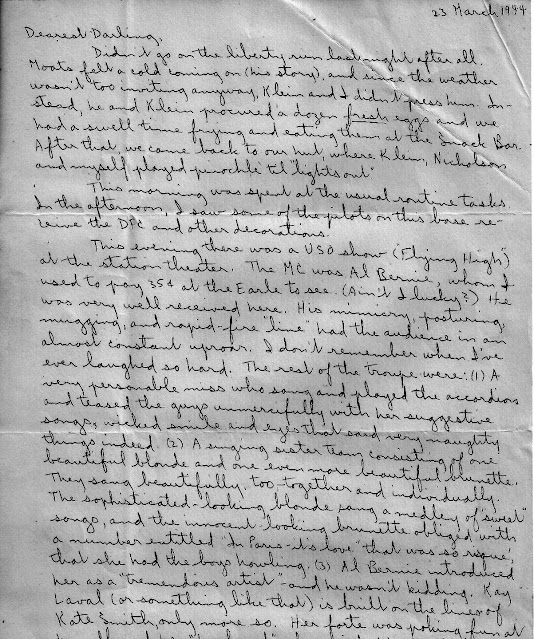 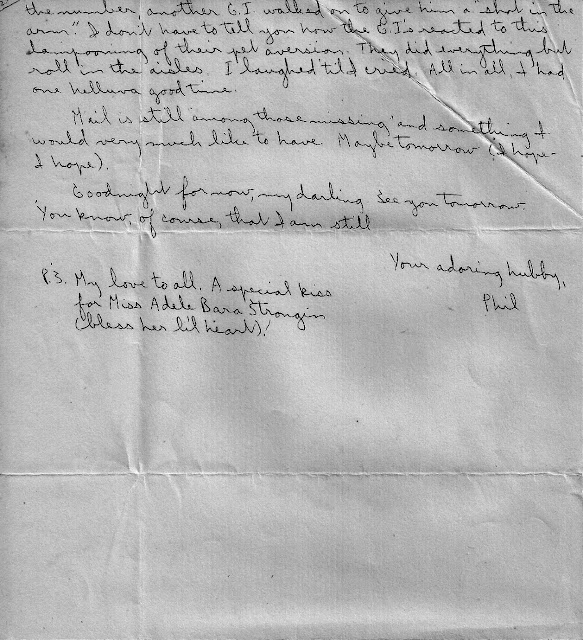 I'm sending off this V-mail 'cause I won't have time to write a full-fledged letter tonight. As a matter of fact, Chippie, I don't rightly know what I'd write about. Nothing worth mentioning took place today and it's been more than a week since I had a “real” letter.

Things in general around here are so dull, that for the first time in many moons I am completely at a loss for words enough to fill even this limited space.

Tonight, as I told you in yesterday's letter, I am accompanying Moats and Klein on the “liberty run.” I'll tell you all about tonight's activities in tomorrow's letter. I hope they'll be something to talk about. I'm really not so keen to go anyplace, but I'm even less anxious to hang around the hut.

I don't know what's holding up the mail like this, but I do wish it would start coming through. Please excuse the brevity of this letter, Sweet, but I'm sure you understand the handicap I'm working under.

Plenty of room left to tell you, in great detail, the great extent of my love for you, Baby, but you are still young and impressionable and I hate to lay the basis for conceit in you—so I'll just remind you that I love you very dearly and let your imagination fill in the blank spaces. Kiss the punkin for me. Love to all from

P.S. Whaddya know? I did it again (filled the sheet, I mean)

No mail (with the exception of some back numbers on Monday) since last Friday and I'm beginning to wonder what, exactly is holding up that mail. I sure do wish something shows up soon cause I’m at a loss of words and can’t seem to get down to some real letter writing. I'm sorry about the V-mail two days in a row, baby, but I'm out of air-mail envelopes and sufficient stamps to write any other way. Besides I'm finding it hard to write at all with the lack of mail. I had a letter from my brother today dated March 12, that contained very little in the way of news. It rained, rained, rained and is still raining for the past 24 hours. My mother may not get the refrigerator cause the party that accepted the deposit may not be able to obtain an apartment she had leased that had a refrigerator. If she gots the apartment with the refrigerator my mother will get her refrigerator and everybody will be happy. Here's hopin'! I cleaned the skylight in the bathroom, the walls, tile and plumbing and floor for a real cleaning and that room fairly sparkles now. I haven't been able to mail the latest package or go to Clair Pruett’s - the weather is against me. At least

all the snow has disappeared. You were home last year at this time and we were preparing to go to Columbus. I kept remembering too much today and I'm kinda blue this evening. I miss you keenly, even hough we have been separated over seven months. Every once in a while I got a terrific urge to see you and don't

know what to do with myself. I love you so much, Phil! It’s been so long since I spoke your name! Mind very much if I say it a couple of times? Phil. Phil. Phil. Phil. My Phil! Goo-night, baby, and don't mind if I cuddle up just as close as I always did. A kiss from

Didn't go on the liberty run last night after all. Moats felt a cold coming on (his story) and since the weather wasn't too inviting anyway, Klein and I didn't press him. Instead, he and Klein procured a dozen fresh eggs, and we had a swell time frying and eating them at the Snack Bar. After that, we came back to our hut where Klein, Nicholson and myself played pinochle ‘til lights out.

This morning was spent at the usual routine tasks. In the afternoon I saw some of the pilots on this base received the DFC and other decorations.

This evening there was a USO show (“Flying High”) at the station theater. The MC was Al Bernie, whom I used to pay 35¢ at the Earle to see. (Ain't I lucky?) He was very well received here. His mimicry, posturing, mugging and rapid-fire “line” had the audience in an almost constant uproar. I don't remember when I've ever laughed so hard. The rest of the troupe were: (1) a very personable miss who sang and played the accordion and teased the guys unmercifully with her suggestive songs, wicked smile and eyes that said very naughty things indeed. (2) A singing sister team consisting of one beautiful blonde and one even more beautiful brunette. They sang beautifully, too, together and individually. The sophisticated-looking blonde sang a medley of “sweet” songs, and the innocent-looking brunette obliged with a number entitled “In Paris—it's love” that was so risqué that she had the boys howling. (3) Al Bernie introduced her as a “tremendous artist,”—and he wasn't kidding. Kay Laval (or something like that) is built on the lines of Kate Smith, only more so. Her forte was poking fun at herself and her “husband,” who assisted her and played the marimba to the entire satisfaction of the G.I.’s. (4) A little tap dancer who used her attractive, if muscular, legs to good advantage. (5) Al Bernie himself. His imitations of Charles Boyer, Edw. G. Robinson and Al Jolson were ludicrously exaggerated and very funny. His best effort though, was his take-off on Sinatra. He coughed, retched, and gave every indication of imminent collapse as he staggered through his song. A G.I. “page” walked on bearing a large sign: “If you feel faint—press the buzzer under the seat.” When it appeared that “Sinatra” couldn't last through the number another G.I. walked on to give him a “shot in the arm.” I don't have to tell you how the G.I.’s reacted to this lampooning of their pet aversion. They did everything but roll in the aisles. I laughed ’til I cried. All in all, I had one helluva good time.

Mail is still “among those missing” and something I would very much like to have. Maybe tomorrow (I hope—I hope).

Goodnight for now, my darling. See you tomorrow. You know, of course, that I am still

P.S. My love to all. A special kiss for Miss Adele Bara Strongin (bless her li’l heart)!