Post #338 - April 8, 1944 What Surprised Me Most was the Completely Renovated Logan Theatre and Almost Two Thousand Showed Up to Attend the Festivities 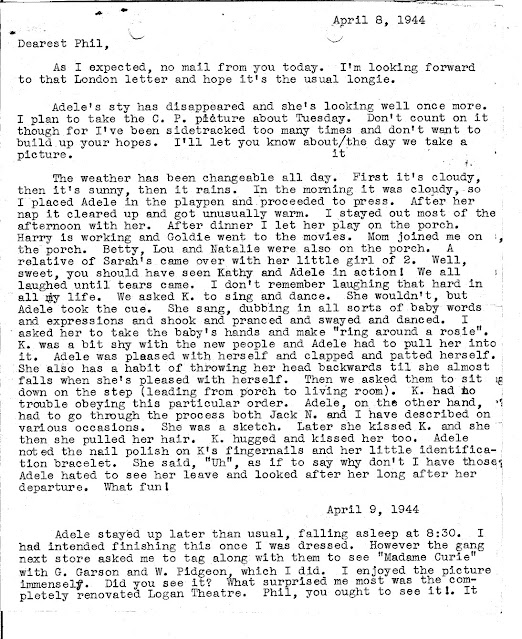 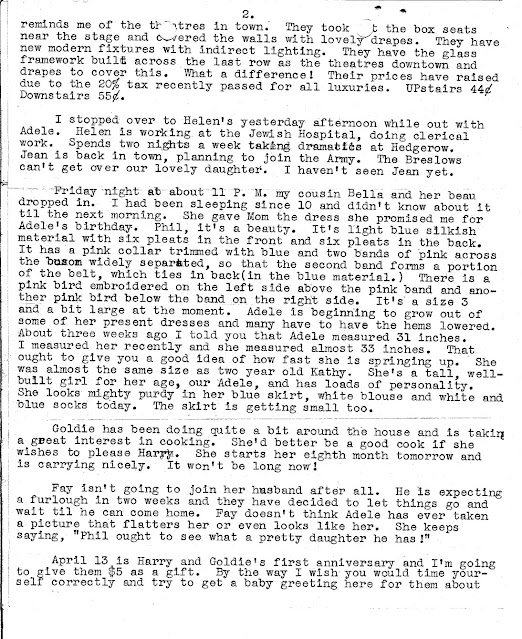 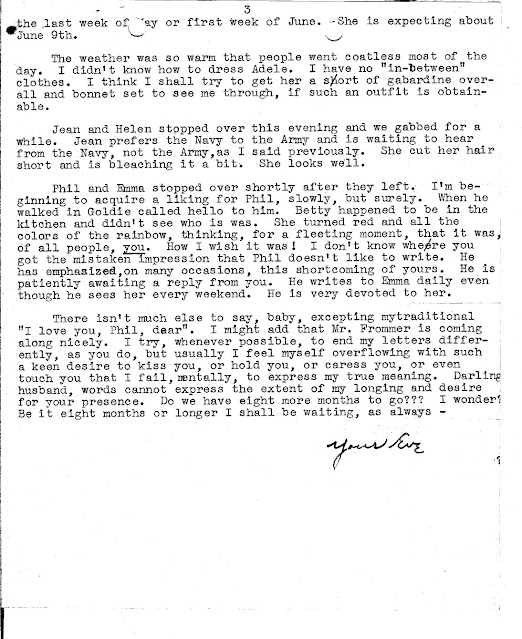 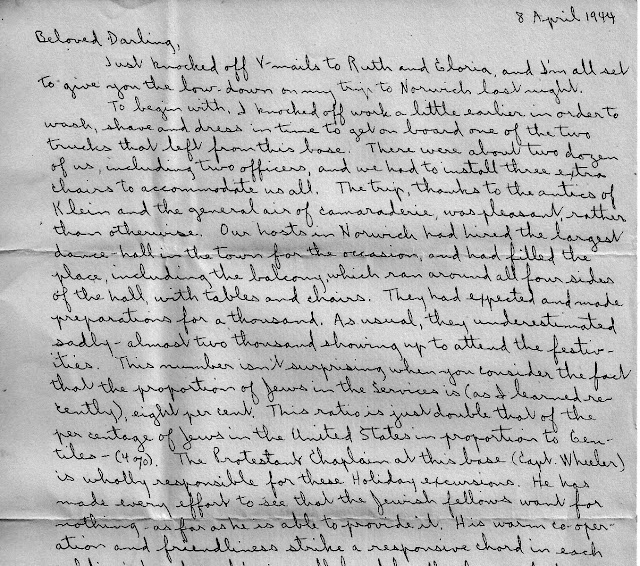 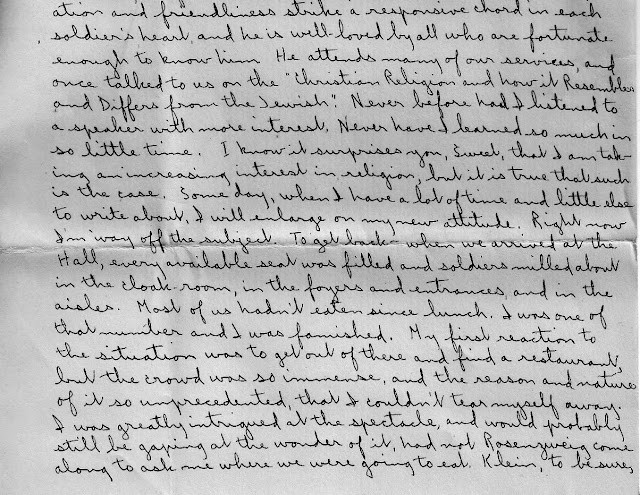 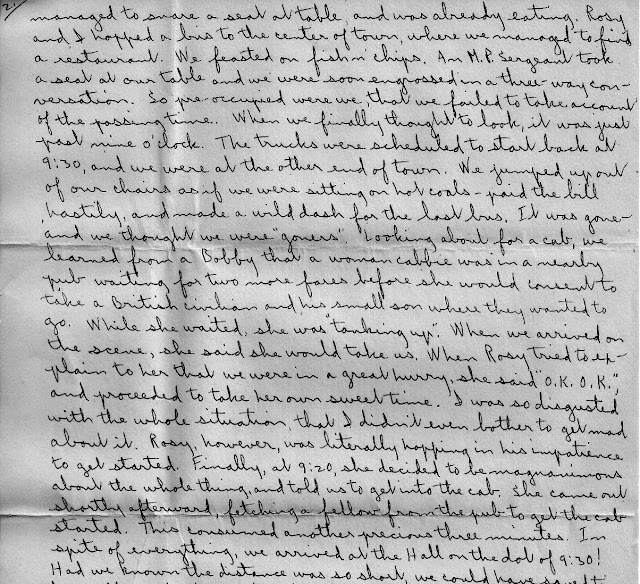 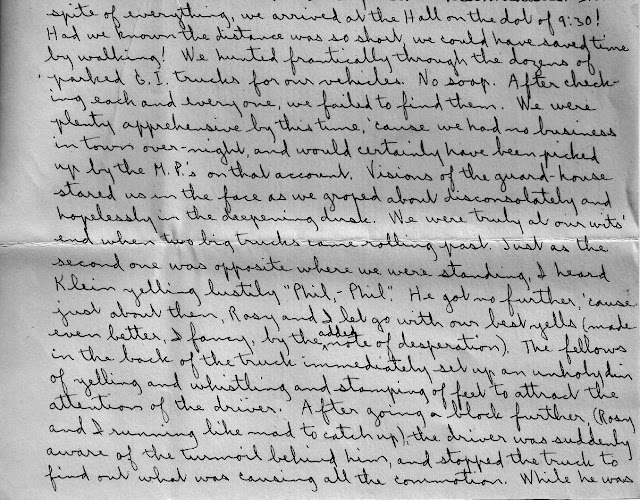 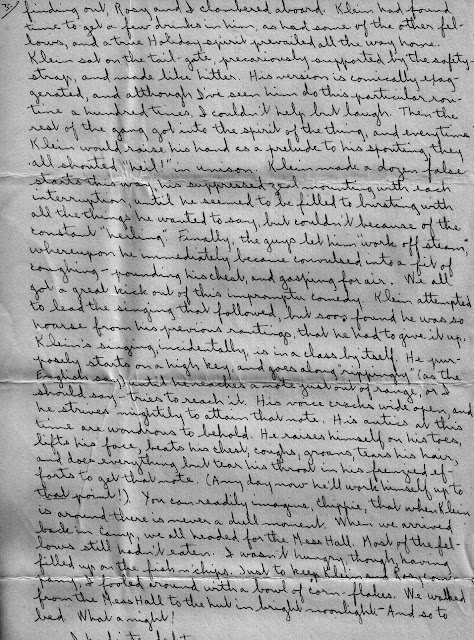 As I expected, no mail from you today. I'm looking forward to that London letter and hope it’s the usual longie.

Adele's sty has disappeared and she is looking well once more. I plan to take the C. P. picture about Tuesday. Don't count on it though for I've been sidetracked too many times and don't want to build up your hopes. I'll let you know about it the day we take a picture.

The weather has been changeable all day. First it's cloudy, then it's sunny, then it rains. In the morning it was cloudy so I placed Adele in the playpen and proceeded to press. After her nap it cleared up and got unusually warm. I stayed out most of the afternoon with her. After dinner I let her play on the porch. Harry is working and Goldie went to the movies. Mom joined me on the porch. Betty, Lou and Natalie were also on the porch. A relative of Sarah's came over with her little girl of 2. Well, sweet, you should have seen Kathy and Adele in action! We all laughed until tears came, I don’t remember laughing that hard in all my life. We asked K. to sing and dance. She wouldn't, but Adele took the cue. She sang, dubbing in all sorts of baby words and expressions and shook and pranced and swayed and danced. I asked her to take the baby's hands and make "ring around a rosie". K. was a bit shy with the new people and Adele had to pull her into it. Adele was pleased with herself and clapped and patted herself. She also has a habit of throwing her head backwards til she almost falls when she's pleased with herself. Then we asked them to sit down on the step (leading from porch to living room). K. had no trouble obeying this particular order. Adele, on the other hand, had to go through the process both Jack N. and I have described on various occasions. She was a sketch. Later she kissed K. and she then she pulled her hair. K. hugged and kissed her too. Adele noted the nail polish on K's fingernails and her little identification bracelet. She said, "Uh", as if to say why don't I have those? Adele hated to see her leave and looked after her long after her departure. What fun!

Adele stayed up later than usual, falling asleep at 8:30. I had intended finishing this once I was dressed. However the gang next store asked me to tag along with them to see *Madame Curie" with G. Garson and W. Pidgeon, which I did. I enjoyed the picture immensely. Did you see it? What surprised me most was the completely renovated Logan Theatre. Phil, you ought to see it! It reminds me of the theatres in town. They took out the box seats near the stage and covered the walls with lovely drapes. They have new modern fixtures with indirect lighting. They have the glass framework built across the last row as the theatres downtown and drapes to cover this. What a difference! Their prices have raised due to the 20% tax recently passed for all luxuries. Upstairs 44¢. Downstairs 55¢.

I stopped over to Helen's yesterday afternoon while out with Adele. Helen is working at the Jewish Hospital, doing clerical work. Spends two nights a week taking dramatics at Hedgerow. Jean is back in town, planning to join the Army. The Breslows can't get over our lovely daughter. I haven't seen Jean yet.

Friday night at about 11 P. M. my cousin Bella and her beau dropped in. I had been sleeping since 10 and didn't know about it til the next morning. She gave Mom the dress she promised me for Adele's birthday. Phil, it’s a beauty. It's light blue silkish material with six pleats in the front and six pleats in the back. It has a pink collar trimmed with blue and two bands of pink across the bosom widely separated, so that the second band forms a portion of the belt, which ties in back (in the blue material.) There is a pink bird embroidered on the left side above the pink band and another pink bird below the band on the right side. It's a size 3 and a bit large at the moment. Adele is beginning to grow out of some of her present dresses and many have to have the hems lowered. About three weeks ago I told you that Adele measured 31 inches. I measured her recently and she measured almost 33 inches. That ought to give you a good idea of how fast she is springing up. She was almost the same size as two year old Kathy. She's a tall, well-built girl for her age, our Adele, and has loads of personality. She looks mighty purdy in her blue skirt, white blouse and white and blue socks today. The skirt is getting small too.

Goldie has been doing quite a bit around the house and is taking a great interest in cooking. She’d better be a good cook if she wishes to please Harry. She starts her eighth month tomorrow and is carrying nicely. It won't be long now!

Fay isn't going to join her husband after all. He is expecting a furlough in two weeks and they have decided to let things go and wait til he can come home. Fay doesn't think Adele has ever taken a picture that flatters her or even looks like her. She keeps saying, "Phil ought to see what a pretty daughter he has !"

April 13 is Harry and Goldie's first anniversary and I'm going to give them $5 as a gift. By the way I wish you would time yourself correctly and try to get a baby greeting here for them about the last week of May or first week of June. She is expecting about June 9th.

The weather was so warm that people went coatless most of the day. I didn't know how to dress Adele. I have no "in-between" clothes. I think I shall try to get her a sort of gabardine overall and bonnet set to see me through, if such an outfit is obtainable.

Jean and Helen stopped over this evening and we gabbed for a while. Jean prefers the Navy to the Army and is waiting to hear from the Navy, not the Army, as I said previously. She cut her hair short and is bleaching it a bit. She looks well.

Phil and Emma stopped over shortly after they left. I'm beginning to acquire a liking for Phil, slowly, but surely. When he walked in Goldie called hello to him. Betty happened to be in the kitchen and didn't see who is was. She turned red and all the colors of the rainbow, thinking, for a fleeting moment, that it was, of all people, you. How I wish it was! I don't know where you got the mistaken impression that Phil doesn't like to write. He has emphasized, on many occasions, this shortcoming of yours. He is patiently awaiting a reply from you. He writes to Emma daily even though he sees her every weekend. He is very devoted to her.

There isn't much else to say, baby, excepting my traditional "I love you, Phil, dear". I might add that Mr. Frommer is coming along nicely. I try, whenever possible, to end my letters differently, as you do, but usually I feel myself overflowing with such a keen desire to kiss you, or hold you, or caress you, or even touch you that I fail, mentally, to express my true meaning. Darling husband, words cannot express the extent of my longing and desire for your presence. Do we have eight more months to go??? I wonder! Be it eight months or longer I shall be waiting, as always -

I had intended to answer your “anniversary letter” of 20 March, but I haven't had any mail for two days now, so I think I’d better save that for tomorrow.

Good-night for now, Sweet. I haven't missed keeping our date yet—have you? Kiss the punkin for me Give my love to all. I adore you.