Post #374 - May 25, 1944 It Doesn’t Seem Like Ten Months—It Seems Like Ten Years and More and Those Few Hours in the Theater Each Day is Just About the Only Thing Worth Writing About 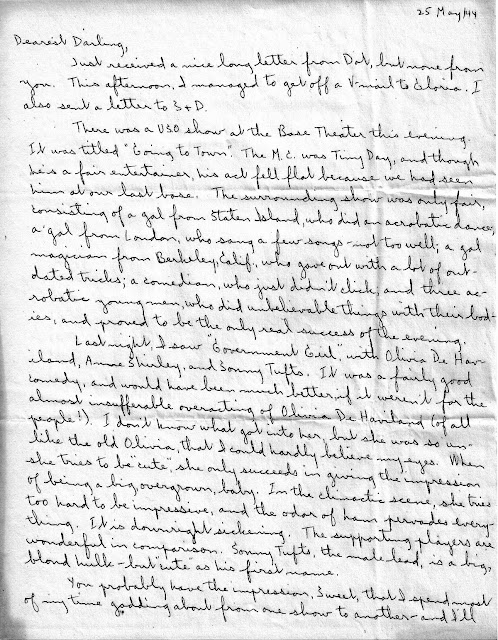 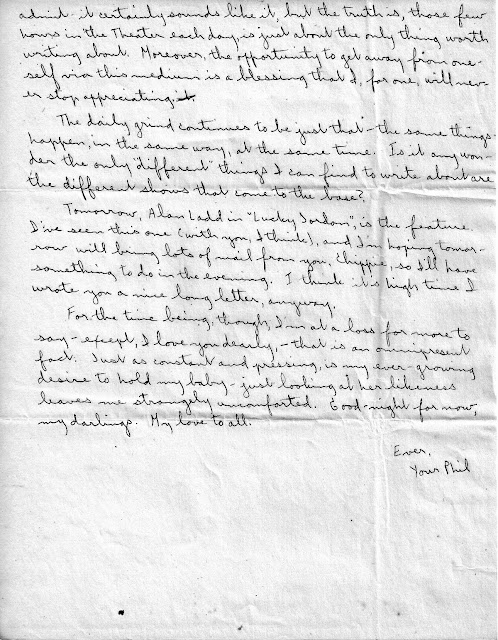 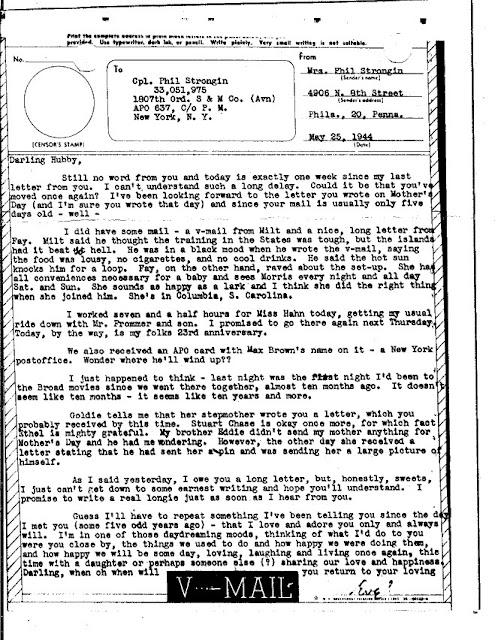 Still no word from you and today is exactly one week since my last letter from you. I can't understand such a long delay. Could it be that you've moved once again? I've been looking forward to the letter you wrote on Mother's Day (and I'm sure you wrote that day) and since your mail is usually only five days old - well -

I did have some mail - a v-mail from Milt and a nice long letter from Fay. Milt said he thought the training in the States was tough, but the islands had it beat to hell. He was in a black mood when he wrote the v-mail, saying the food was lousy, no cigarettes, and no cool drinks. He said the hot sun knocks him for a loop. Fay, on the other hand, raved about the setup. She has all the conveniences necessary for a baby, and sees Morris every night and all day Sat. and Sun. She sounds as happy as a lark and I think she did the right thing when she joined him. She's in Columbia, SC.

I worked seven and a half hours for Miss Han today, getting my usual ride down with Mr. Frommer and son. I promised to go there again next Thursday. Today, by the way, is my folks 23rd anniversary.

We also received an APO card with Max Brown's name on it - a New York post office. Wonder where he'll wind up?

I just happened to think - last night was the first night I'd been to the Broad movies since we went there together, almost ten months ago. It doesn't seem like ten months - it seems like ten years and more.

Goldie tells me that her stepmother wrote you a letter, which you probably received by this time. Stuart Chase is okay once more, for which fact Ethel is mighty grateful. My brother Eddie didn't send my mother anything for Mother's Day and he had me wondering. However, the other day she received a letter stating that he had sent her a pin and was sending her a large picture of himself.

As I said yesterday, I owe you a long letter, but honestly, sweets, I just can't get down to some earnest writing and hope you'll understand. I promise to write a real longie just as soon as I hear from you.

Guess I'll have to repeat something I've been telling you since the day I met you (some five odd years ago) - that I love and adore you only and always will. I'm in one of those daydreaming moods, thinking of what I’d do to you were you close by, the things we used to do and how happy we were doing them and how happy we will be someday, loving, laughing and living once again, this time with a daughter, or perhaps someone else (?) sharing our love and happiness. Darling, when, oh when will you return to your loving

Just received a nice long letter from Dot, but not from you. This afternoon I managed to get off a V-mail to Gloria. I also sent a letter to S & D.

There was a USO show at the Base Theater this evening. It was titled “Going to Town.” The M.C. was Tiny Day, and though he's a fair entertainer, his act fell flat because we had seen him at our last base. The surrounding show was only fair, consisting of a gal from Staten Island who did an acrobatic dance; a gal from London who sang a few songs—not too well; a gal magician from Berkeley, Calif., who gave out with a lot of outdated tricks; a comedian who just didn't click; and three acrobatic young men who did unbelievable things with their bodies, and proved to be the only real success of the evening.

Last night I saw “Government Girl” with Olivia De Haviland, Anne Shirley, and Sonny Tufts. It was a fairly good comedy and would have been much better if it weren't for the almost insufferable overacting of Olivia De Haviland (of all people!). I don't know what got into her, but she was so unlike the old Olivia, that I could hardly believe my eyes. When she tries to be “cute,” she only succeeds in giving the impression of being a big, overgrown, baby. In the climactic scene, she tries too hard to be impressive, and the odor of ham pervades everything. It is downright sickening. The supporting players are wonderful in comparison. Sonny Tufts, the male lead, is a big, blonde hulk—but “cute” as his first name.

You probably have the impression, Sweet, that I spend most of my time gadding about from one show to another—and I'll admit, it certainly sounds like it, but the truth is, those few hours in the theater each day is just about the only thing worth writing about. Moreover, the opportunity to get away from oneself via this medium is a blessing that I, for one, will never stop appreciating.

The daily grind continues to be just that—the same things happen in the same way at the same time. Is it any wonder the only “different” things I can find to write about are the different shows that come to the base?

Tomorrow, Alan Ladd in “Lucky Jordan,” is the feature. I've seen this one (with you, I think), and I'm hoping tomorrow will bring lots of mail from you, Chippie, so I'll have something to do in the evening. I think it's high time I wrote you a nice long letter, anyway.

For the time being, though, I'm at a loss for more to say—except I love you dearly— that is an omnipresent fact. Just as constant and pressing, is my ever-growing desire to hold my baby—just looking at her likeness leaves me strangely uncomforted. Good-night for now, my darlings. My love to all.

Ever,
Your Phil
Posted by Marilyn at 8:02 AM