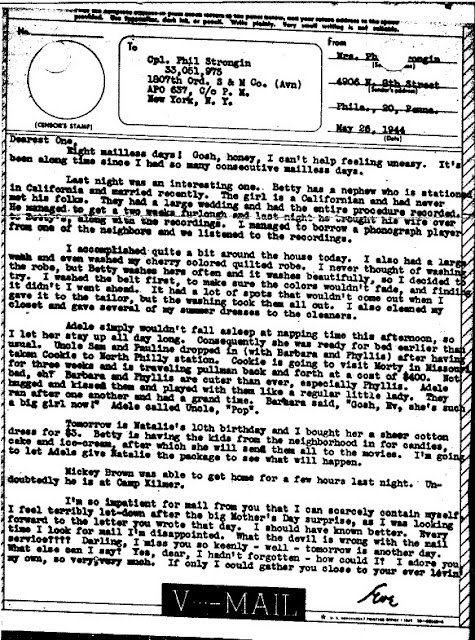 Eight mailless days! Gosh, honey, I can't help feeling uneasy. It's been a long time since I had so many consecutive mailless days.

Last night was an interesting one. Betty has a nephew who is stationed in California and married recently. The girl is a Californian and had never met his folks. They had a large wedding and had the entire procedure recorded. He managed to get a two weeks furlough and last night he brought his wife over to Betty's along with the recordings. I managed to borrow a phonograph player from one of the neighbors and we listened to the recordings.

I accomplished quite a bit around the house today. I also had a large wash and even washed my cherry colored quilted robe. I never thought of washing the robe, but Betty washes hers often and it washes beautifully, so I decided to try. I washed the belt first, to make sure the colors wouldn't fade, and finding it didn't, I went ahead. It had a lot of spots that wouldn't come out when I gave it to the tailor, but the washing took them all out. I also cleaned my closet and gave several of my summer dresses to the cleaners.

Adele simply wouldn't fall asleep at napping time this afternoon, so I let her stay up all day long. Consequently, she was ready for bed earlier than usual. Uncle Sam and Pauline dropped in (with Barbara and Phyllis) after having taken Cookie to North Philly station. Cookie is going to visit Morty in Missouri for three weeks and is traveling pullman back and forth as at a cost of $400. Not bad, eh? Barbara and Phyllis are cuter than ever, especially Phyllis. Adele hugged and kissed them and played with them like a regular little lady. They ran after one another and had a grand time. Barbara said, “Gosh, Ev, she's such a big girl now!” Adele called Uncle, “Pop.”

Tomorrow is Natalie’s 10th birthday and I bought her a sheer cotton dress for $3. Betty is having the kids from the neighborhood in for candies, cake and ice cream, after which she will send them all to the movies. I'm going to let Adele give Natalie the package to see what will happen.

Mickey Brown was able to get home for a few hours last night. Undoubtedly, he is at Camp Kilmer.

I'm so impatient for mail from you that I can scarcely contain myself and feel terribly let-down after the big Mother's Day surprise, as I was looking forward to the letter you wrote that day, I should have known better. Every time I look for mail, I disappointed. What the devil is wrong with the mail service???? Darling, I miss you so keenly - well - tomorrow is another day. What else can I say? Yes, dear, I hadn't forgotten - how could I? I adore you, my own, so very very much. If only I could gather you close to your ever lovin’