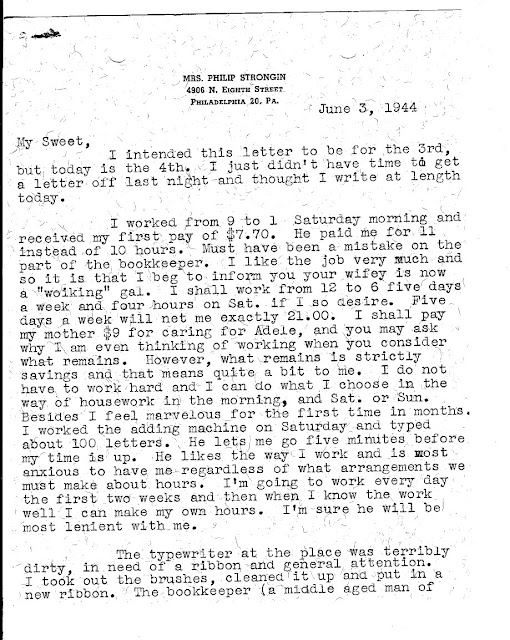 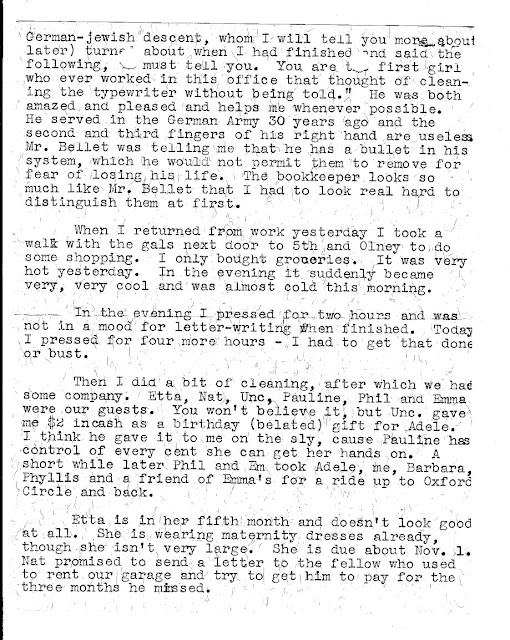 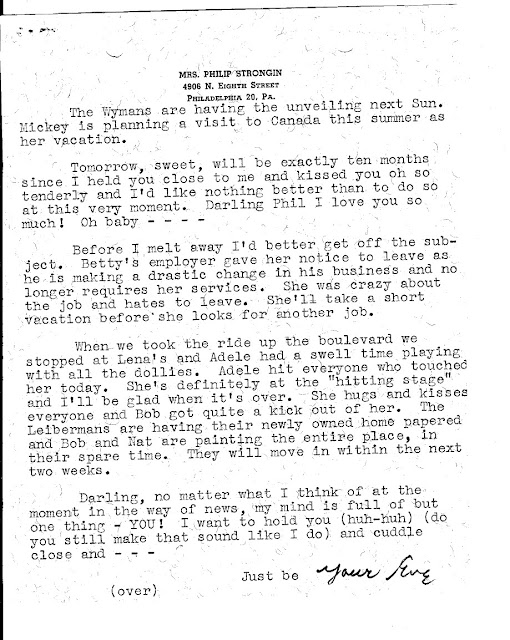 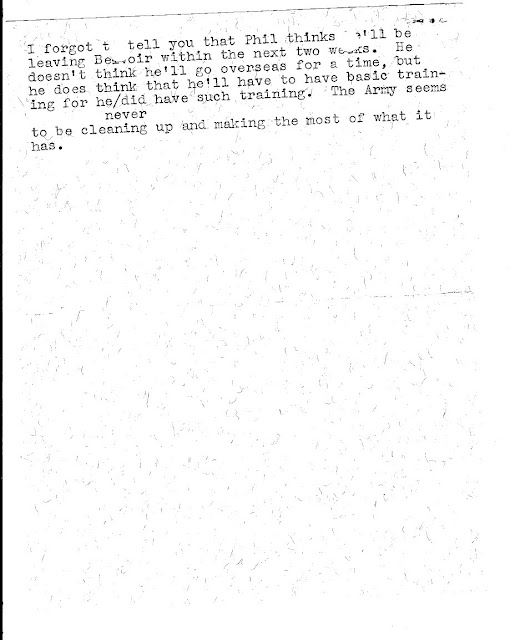 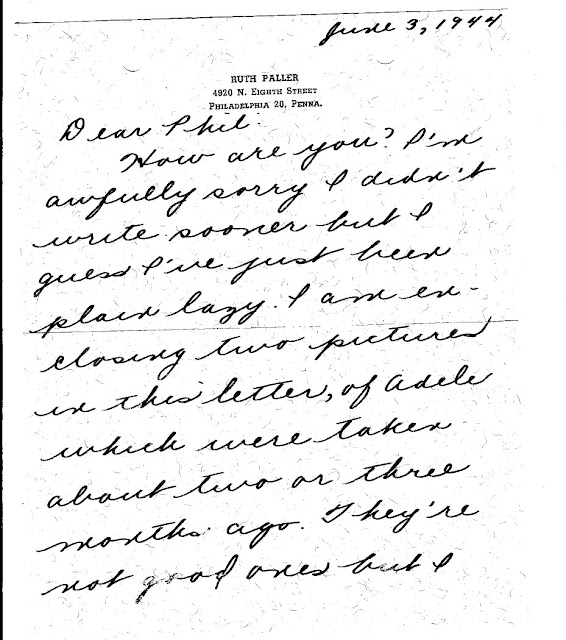 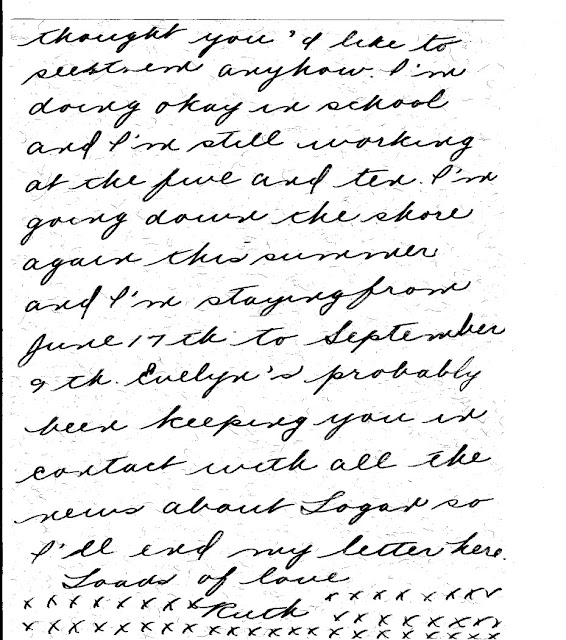 I intended this letter to be for the 3rd, but today is the 4th. I just didn't have time to get a letter off last night and thought I write at length i today.,

I worked from 9 to 1 Saturday morning and received my first pay of $7.70. He paid me for, 11 instead of 10 hours. Must have been a mistake on the part of the bookkeeper. I like the job very much and so it is that I beg to inform you your wifey is now à "woiking" gal. I shall work from 12 to 6 five days a week and four hours on Sat. if I so desire. Five days a week will net me exactly 21.00. I shall pay my mother $9 for caring for Adele, and you may ask why I am even thinking of working when you consider what remains. However, what remains is strictly savings and that means quite a bit to me. I do not have to work hard and I can do what I choose in the way of housework in the morning, and Sat. or Sun. Besides I feel marvelous for the first time in months. I worked the adding machine on Saturday and typed about 100 letters. He lets me go five minutes before my time is up. He likes the way I work and is most anxious to have me regardless of what arrangements we must make about hours. I'm going to work every day the first two weeks and then when I know the work well I can make my own hours. I’m sure he will be most lenient with me.

The typewriter at the place was terribly dirty, in need of a ribbon and general attention. I took out the brushes, cleaned it up and put in a new ribbon. The bookkeeper (a middle aged man of German-jewish descent, whom I will tell you more about later) turned about when I had finished and said the following: “I must tell you. You are the first girl who ever worked in this office that thought of cleaning the typewriter without being told." He was both amazed and pleased and helps me whenever possible. He served in the German Army 30 years ago and the second and third fingers of his right hand are useless Mr. Bellet was telling me that he has a bullet in his system, which he would not permit them to remove for fear of losing his life. The bookkeeper looks so it much like Mr. Bellet that I had to look real hard to distinguish them at first.

When I returned from work yesterday I took a walk with the gals next door to 5th and OIney to do some shopping. I only bought groceries. It was very hot yesterday. In the evening it suddenly became the very, very cool and was almost cold this morning.

In the evening I pressed for two hours and was not in a mood for letter-writing when finished. Today I pressed for four more hours - I had to get that done or bust.

Then I did a bit of cleaning, after which we had some company. Etta, Nat, Unc, Pauline, Phil and Emma were our guests. You won't believe it but Unc. gave me $2 in cash as a birthday (belated) gift for Adele. I think he gave it to me on the sly cause Pauline has control of every cent she can get her hands on. A short while later Phil and Em took Adele, me, Barbara, Phyllis and a friend of Emma's for a ride up to Oxford Circle and back.

Etta is in her fifth month and doesn't look good at all. She is wearing maternity dresses already, though she isn't very large. She is due about Nov. 1. Nat promised to send a letter to the fellow who used to rent our garage and try to get him to pay for the three months he missed.

The Wymans are having the unveiling next Sun. Mickey is planning a visit to Canada this summer as her vacation.

Tomorrow, sweet, will be exactly ten months since I held you close to me and kissed you oh so tenderly and I'd like nothing better than to do so at this very moment. Darling Phil I love you so much! Oh baby - - - -

Before I melt away I'd better get off the subject. Betty's employer gave her notice to leave as he is making a drastic change in his business and no longer requires her services. She was crazy about the job and hates to leave. She'll take a short vacation before she looks for another job.

When we took the ride up the boulevard we stopped at Lena's and Adele had a swell time playing with all the dollies. Adele hit everyone who touched her today. She's definitely at the "hitting stage" and I'll be glad when it's over. She hugs and kisses everyone and Bob got quite a kick out of her. The Leibermans are having their newly owned home papered and Bob and Nat are painting the entire place, in their spare time. They will move in within the next two weeks.

Darling, no matter what I think of at the moment in the way of news, my mind is full of but one thing - YOU! I want to hold you (huh-huh) (do you still make that sound like I do) and cuddle close and - - -

I forgot to tell you that Phil thinks he’ll be leaving Belvoir within the next two weeks. He doesn't think he'll go overseas for a time, but he does think that he'll have to have basic training for he never did have such training. The Army seems to be cleaning up and making the most of what it is has.

How are you? I'm awfully sorry I didn't write sooner, but I guess I've just been plain lazy. I am enclosing two pictures in this letter, of Adele which were taken about two or three months ago. They are not good ones, but I thought you'd like to see them anyhow. I'm doing okay in school and I'm still working at the five and ten. I'm going down the shore again this summer and I'm staying from June 17th to September 9th. Evelyn's probably been keeping you in contact with all the news about Logan, so I'll end my letter here.