Post #386 - June 7, 1944 I Like the Job Immensely and am Learning Most of the Business Quickly and All Day, I’ve Been Listening to the Radio, Hoping to Get Some Fresh News of the Invasion 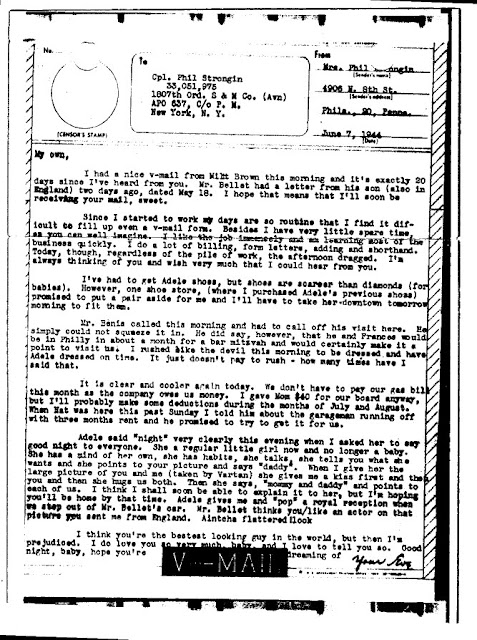 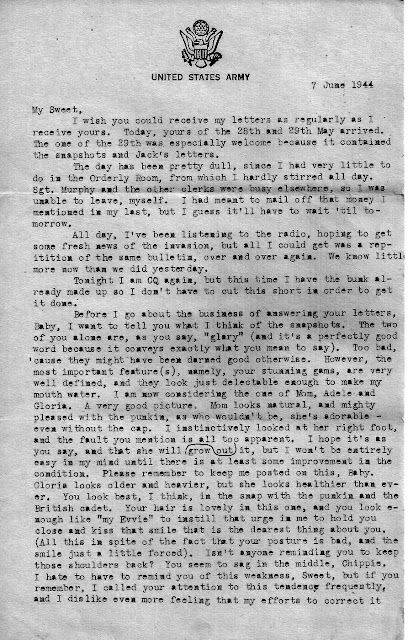 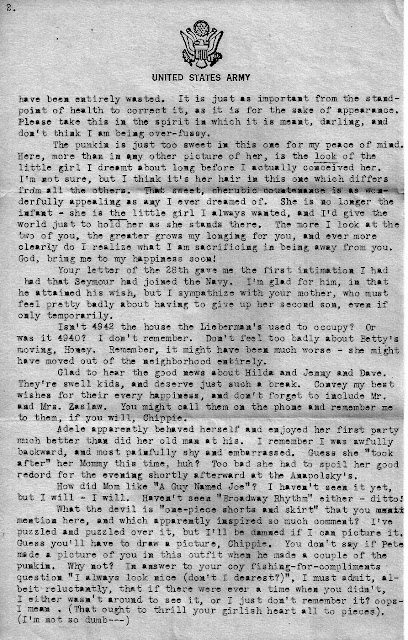 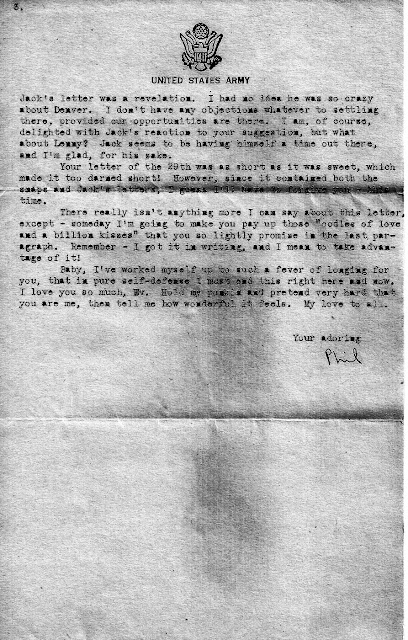 I had a nice v-mail from Milt Brown this morning and it's exactly 20 days since I've heard from you. Mr. Bellet had a letter from his son (also in England) two days ago, dated May 18. I hope that means I'll soon be receiving your mail, sweet.

Since I started to work my days are so routine that I find it difficult to fill up even a v-mail form. Besides, I have very little spare time as you can well imagine. I like the job immensely and I'm learning most of the business quickly. I do a lot of billing, form letters, adding and shorthand. Today though, regardless of the pile of work, the afternoon dragged. I'm always thinking of you and wish very much that I could hear from you.

I've had to get Adele shoes, but shoes are scarcer than diamonds (for babies). However, one shoe store where I purchased Adele’s previous shoes promised to put a pair aside for me and I'll have to take her downtown tomorrow morning to fit them.

Mr. Benis called this morning and had to call off his visit here. He simply could not squeeze it in. He did say, however, that he and Frances would be in Philly in about a month for a bar mitzvah, and would certainly make it a point to visit us. I rushed like the devil this morning to be dressed and have Adele dressed on time. It just doesn't pay to rush - how many times have I said that?

It is clear and cooler again today. We don't have to pay our gas bill this month as the company owes us money. I gave Mom $40 for our board anyway, but I'll probably make some deductions during the month of July in August. When Nat was here this past Sunday, I told him about the garageman running off with three months rent and he promised to try to get it for us.

Adele said “night” very clearly this evening when I asked her to say good night to everyone. She's a regular little girl now and no longer a baby. She has a mind of her own, she has habits, she talks, and she tells you what she wants and she points to your picture and says “daddy”. When I give her the large picture of you and me (taken by Vartan) she gives me a kiss first and then you and then she hugs us both. Then she says, “mommy and daddy” and points to each of us. I think I shall soon be able to explain it to her, but I'm hoping you'll be home by that time. Adele gives me and “pop” a royal reception when we step out of Mr Bellet’s car. Mr. Bellet thinks you look like an actor on the picture you sent me from England. Aincha flattered!

I think you're the best looking guy in the world, but then I'm prejudiced. I do love you so much, baby, and I love to tell you so. Good night, baby, hope you're dreaming of

I wish you could receive my letters as regularly as I receive yours, Today, yours of the 28th and 29th May arrived. The one of the 29th was especially welcome because it contained the snapshots and Jack's letters,

The day has been pretty dull, since I had very little to do in the Orderly Room, from which I hardly stirred all day. Sgt. Murphy and the other clerks were busy elsewhere, so I was unable to leave, myself. I had meant to mail off that money I mentioned in my last, but I guess it'll have to wait 'til to morrow,

All day, I've been listening to the radio, hoping to get some fresh news of the invasion, but all I could get was a repetition of the same bulletin, over and over again. We know little more now than we did yesterday.

Tonight I am CQ again, but this time I have the bunk already made up so I don't have to cut this short in order to get it done.

Before I go about the business of answering your letters, Baby, I want to tell you what I think of the snapshots, The two of you alone are, as you say, "glary" (and it's a perfectly good word because it conveys exactly what you mean to say). Too bad, ’cause they might have been darned good otherwise, However, the most important feature(s), namely, your stunning gams, are very well defined, and they look just delectable enough to make my mouth water. I am now considering the one of Mom, Adele and Gloria. A very good picture. Mom looks natural, and mighty pleased with the punkin, as who wouldn't be, she's adorable - even without the cap. I instinctively looked at her right foot, and the fault you mention is all too apparent, I hope it's as you say, and that she will grow out of it, but I won't be entirely easy in my mind until there is at least some improvement in the condition. Please remember to keep me posted on this, Baby. Gloria looks older and heavier, but she looks healthier than ever. You look best, I think, in the snap with the punkin and the British cadet. Your hair is lovely in this one, and you look enough like "my Evvie" to instill that urge in me to hold you close and kiss that smile that is the dearest thing about you, (All this in spite of the fact that your posture is bad, and the smile just a little forced). Isn't anyone reminding you to keep those shoulders back? You seem to sag in the middle, Chippie. I hate to have to remind you of this weakness, Sweet, but if you remember, I called your attention to this tendency frequently, and I dislike even more feeling that my efforts to correct it have been entirely wasted. It is just as important from the standpoint of health to correct it, as it is for the sake of appearance. Please take this in the spirit in which it is meant, darling, and don't think I am being over-fussy,

The punkin is just too sweet in this one for my peace of mind, Here, more than in any other picture of her, is the look of the little girl I dreamt about long before I actually conceived her. I'm not sure, but I think it's her hair in this one which differs from all the others. That sweet, cherubic countenance is as wonderfully appealing as any I ever dreamed of. She is no longer the infant - she is the little girl I always wanted, and I'd give the world just to hold her as she stands there. The more I look at the two of you, the greater grows my longing for you, and ever more clearly do I realize what I am sacrificing in being away from you. God, bring me to my happiness soon!

Your letter of the 28th gave me the first intimation I had had that Seymour had joined the Navy. I'm glad for him, in that he attained his wish, but I sympathize with your mother, who must feel pretty badly about having to give up her second son, even if only temporarily.

Isn't 4942 the house the Lieberman's used to occupy? Or was it 4940? I don't remember. Don't feel too badly about Betty's moving, Honey. Remember, it might have been much worse - she might have moved out of the neighborhood entirely,

Glad to hear the good news about Hilda and Jenny and Dave. They're swell kids, and deserve just such a break. Convey my best wishes for their every happiness, and don't forget to include Mr. and Mrs. Zaslaw. You might call them on the phone and remember me to them, if you will, Chippie,

Adele apparently behaved herself and enjoyed her first party much better than did her old man at his. I remember I was awfully backward, and most painfully shy and embarrassed. Guess she "took after" her Mommy this time, huh? Too bad she had to spoil her good record for the evening shortly afterward at the Anapolsky's,

How did Mom like "A Guy Named Joe"? I haven't seen it yet, but I will - I will. Haven't seen Broadway Rhythm' either - ditto!

What the devil is "one-piece shorts and skirt that you mention here, and which apparently inspired so much comment? I've puzzled and puzzled over it, but I'll be damned if I can picture it. Guess you'll have to draw a picture, Chippie. You don't say if Pete made a picture of you in this outfit when he made a couple of the punkin. Why not? In answer to your coy fishing-for-compliments question "I always look nice (don't I dearest?)", I must admit, albeit reluctantly, that if there were ever a time when you didn't, I either wasn't around to see it, or I just don't remember it? oops I mean (That ought to thrill your girlish heart all to pieces). (I'm not so dumb---)

Jack's letter was a revelation. I had no idea he was so crazy about Denver, I don't have any objections whatever to settling there, provided our opportunities are there. I am, of course, delighted with Jack's reaction to your suggestion, but what about Lenny? Jack seems to be having himself a time out there, and I'm glad, for his sake.

Your letter of the 29th was as short as it was sweet, which made it too darned short. However, since it contained both the snaps and Jack's letters, I guess I'll have to forgive you - this time.

There really isn't anything more I can say about this letter, except - someday I'm going to make you pay up those "oodles of love and a billion kisses" that you so lightly promise in the last paragraph, Remember - I got it in writing, and I mean to take advantage of it!

Baby, I've worked myself up to such a fever of longing for you, that in pure self-defense I must end this right here and now. I love you so much, Ev, hold my punkin and pretend very hard that you are me, then tell me how wonderful it feels. My love to all.