Post #387 - June 8, 1944 I Don’t Think, Sweet, That You’re Going to Make Adele’s Second Birthday and Don’t Get the Idea I’m Complaining, Chippie,—I Couldn’t. Not with Thoughts of the Boys on Normandy’s Beaches Almost Constantly in My Mind 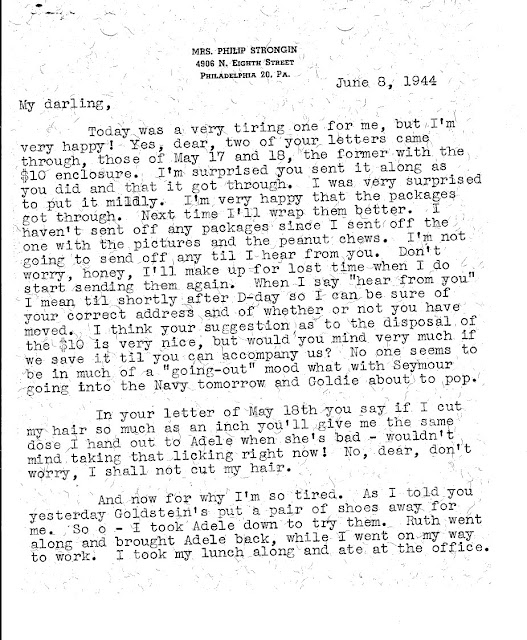 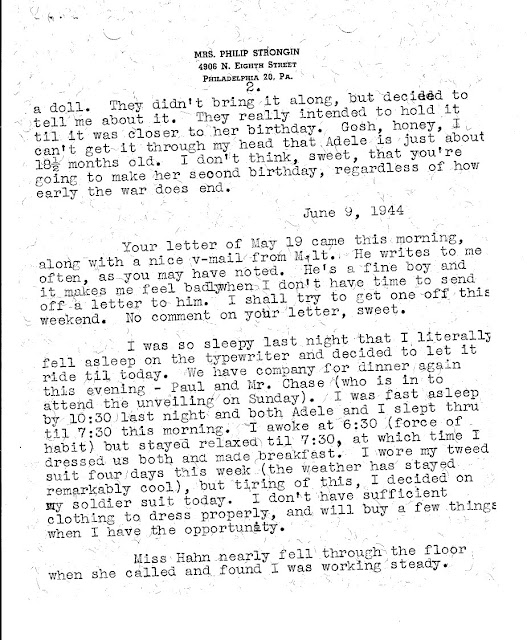 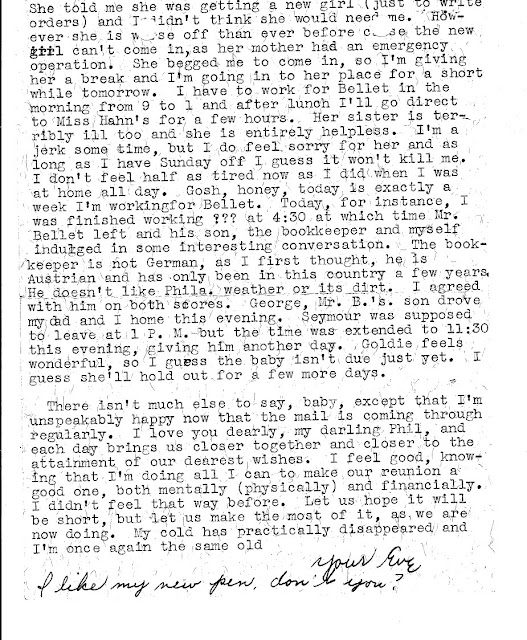 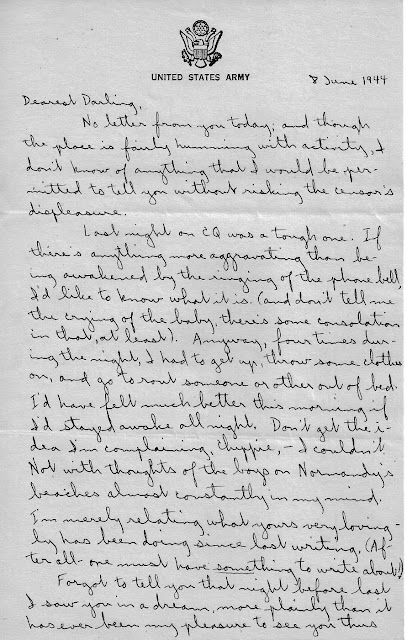 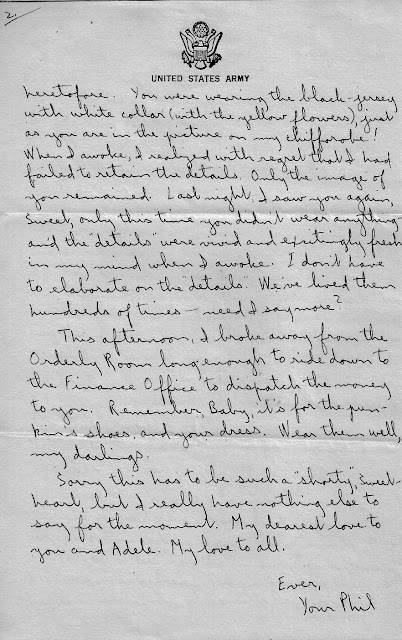 Today was a very tiring one for me, but I'm very happy! Yes, dear, two of your letters came through, those of May 17 and 18, the former with the $10 enclosure. I'm surprised you sent it along as you did and that it got through. I was very surprised to put it mildly. I'm very happy that the packages got through. Next time I'll wrap them better. I haven't sent off any packages since I sent off the one with the pictures and the peanut chews. I'm not going to send off any til I hear from you. Don't, worry, honey, I'll make up for lost time when I do start sending them again. When I say “hear from you" I mean til shortly after D-day so I can be sure of your correct address and of whether or not you have moved. I think your suggestion as to the disposal, of the $10 is very nice, but would you mind very much if we save it til you can accompany us? No one seems to be in much of a "going-out" mood what with Seymour going into the Navy tomorrow and Goldie about to pop.

In your letter of May 18th you say if I cut my hair so much as an inch you'll give me the same dose I hand out to Adele when she's bad - wouldn't mind taking that licking right now! No, dear, don't worry, I shall not cut my hair.

And now for why I'm so tired. As I told you yesterday Goldstein's put a pair of shoes away for me. So o - I took Adele down to try them. Ruth went along and brought Adele back, while I went on my way to work. I took my lunch along and ate at the office.

I was terribly disappointed, cause the white shoes he had set aside were of a different make and were too narrow across the instep. I had to settle for brown shoes, honey, and no one, including me, likes them. However, that does not detract from the fact that they are good shoes, well-made, and that her walking has improved noticeably in just one day. The fellow at the shop told me that he is expecting a few pairs of white buckskin in about the first week of July so I'll try to get her another pair then - for dress. The brown shoes are a pleasure, honey, cause they look neat and don't have to be cleaned twice a day. They are a 6-1/2 D and cost $3.50.

Adele was a good girl going down and Ruth reports that she slept all the way back. I carried Adele to 5th St. to save time and Ruth carried her from 8th and South to 10th and South. I boarded the 47 trolley with her at 9th and South and bought an

exchange for the Market St. trolley. I was 15 minutes late for work, but Mr. Bellet didn't mind. Nor did he mind that my dad brought me in a large container of hot chocolate and some cough drops. Both Adele and I awoke with colds in the morning and I hesitated about taking her downtown, but the fellow refused to hold the shoes for me and I simply could not wait any longer. That's what made me so tired. My resistance is good though and I'll throw it off in no time. Same goes for Adele.

Mr. Bellet isn't a bit strict, in fact, he sometimes sits and talks to me. The job is easy

and will be easier once I get on to the work. I feel wonderful when I get home- not at all tired.

This evening we have company for dinner - Rae and Mickey. Rae brought Adele a half dozen lollipops and a lot of chocolate squares. Adele sat and sucked a lollipop for about a half hour. She loved it and got all “stuck up", if’n you know what I mean. I also learned that the girls have bought Adele a birthday gift long in advance of her 2nd birthday - a doll. They didn't bring it along, but decided to tell me about it. They really intended to hold it til it was closer to her birthday. Gosh, honey, I can't get it through my head that Adele is just about 18-1/2 months old. I don't think, sweet, that you're going to make her second birthday, regardless of how early the war does end.

Your letter of May 19 came this morning, along with a nice v-mail from Milt. He writes to me often, as you may have noted. He's a fine boy and it makes me feel badly when I don't have time to send off a letter to him. I shall try to get one off this weekend. No comment on your letter, sweet.

I was so sleepy last night that I literally fell asleep on the typewriter and decided to let it ride til today. We have company for dinner again this evening - Paul and Mr. Chase (who is in to attend the unveiling on Sunday). I was fast asleep by 10:30 last night and both Adele and I slept thru til 7:30 this morning. I awoke at 6:30 (force of.. habit) but stayed relaxed til 7:30, at which time I dressed us both and made breakfast. I wore my tweed suit four days this week (the weather has stayed remarkably cool), but tiring of this, I decided on my soldier suit today. I don’t have sufficient clothing to dress properly, and will buy a few things when I have the opportunity.'

Miss Hahn nearly fell through the floor when she called and found I was working steady. She told me she was getting a new girl in (just to write orders) and I didn't think she would need me. How ever she is worse off than ever before cause the new girl can't come in, as her mother had an emergency operation. She begged me to come in, so I'm giving her a break and I'm going in to her place for a short while tomorrow. I have to work for Bellet in the morning from 9 to 1 and after lunch I'll go direct to Miss Hahn's for a few hours. Her sister is terribly ill too and she is entirely helpless. I'm a jerk some time, but I do feel sorry for her and as long as I have Sunday off I guess it won't kill me. I don't feel half as tired now as I did when I was

at home all day. Gosh, honey, today is exactly a week I'm working for Bellet. Today, for instance, I was finished working ??? at 4:30 at which time Mr. Bellet left and his son, the bookkeeper and myself indulged in some interesting conversation. The bookkeeper is not German, as I first thought, he is Austrian and has only been in this country a few years. He doesn't like Phila. weather or its dirt. I agreed with him on both scores, George, Mr. B.'s son drove my dad and I home this evening. Seymour was supposed to leave at 1 P. M. but the time was extended to 11:30 this evening, giving him another day. Goldie feels wonderful, so I guess the baby isn't due just yet. I guess she'll hold out for a few more days.

There isn't much else to say, baby, except that I'm unspeakably happy now that the mail is coming through regularly. I love you dearly, my darling Phil, and each day brings us closer together and closer to the attainment of our dearest wishes. I feel good, knowing that I'm doing all I can to make our reunion a good one, both mentally (physically) and financially. I didn’t feel that way before. Let us hope it will be short, but let us make the most of it, as we are now doing. My cold has practically disappeared and I'm once again the same old

No letter from you today; and though the place is fairly humming with activity, it don't know of anything that I would be permitted to tell you without risking the censor's displeasure.

Last night on CQ was a tough one. If there's anything more aggravating than being awakened by the ringing of the phone bell, I'd like to know what it is (and don't tell me the crying of the baby, there's some consolation in that, at least). Anyway, four times during the night, I had to get up, throw some clothes on, and go to rout someone or other out of bed. I'd have felt much better this morning if I'd stayed awake all night. Don't get the idea I’m complaining, Chippie,—I couldn't. Not with thoughts of the boys on Normandy's beaches almost constantly in my mind. I’m merely relating what yours very lovingly has been doing since last writing (After all—one must have something to write about!)

Forgot to tell you that night before last I saw you in a dream, more plainly than a has ever been my pleasure to see you thus heretofore. You were wearing the black-jersey with white collar (with the yellow flowers), just as you are in the picture on my chifforobe! When I awoke, I realized with regret that I had failed to retain the details. Only the image of you remained. Last night, I saw you again, Sweet, only this time you didn't wear anything and the “details" were vivid and excitingly fresh in my mind when I awoke. I don't have to elaborate on the “details.” We've lived them hundreds of times—need I say more?

This afternoon, I broke away from the Orderly Room long enough to ride down to the Finance Office to dispatch the money to you. Remember, Baby, it is for the punkin's shoes, and your dress. Wear them well, my darlings.

Sorry this has to be such a “shorty,” Sweetheart, but I really have nothing else to

say for the moment. My dearest love to you and Adele. My love to all.