Post #395 - June 19, 1944 Most People Didn’t Get Too Excited, Wondering How High the Price Would Be and Who Would Pay with His Life and A Letter from Brother Seymour 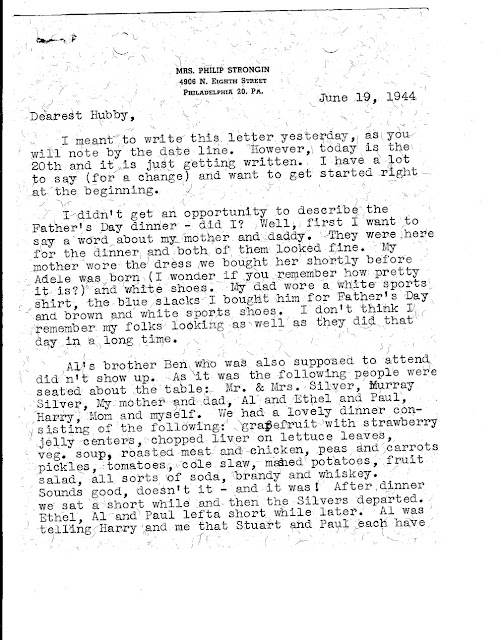 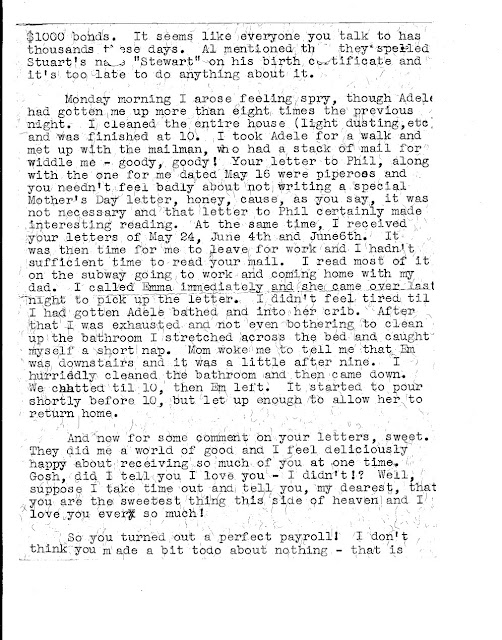 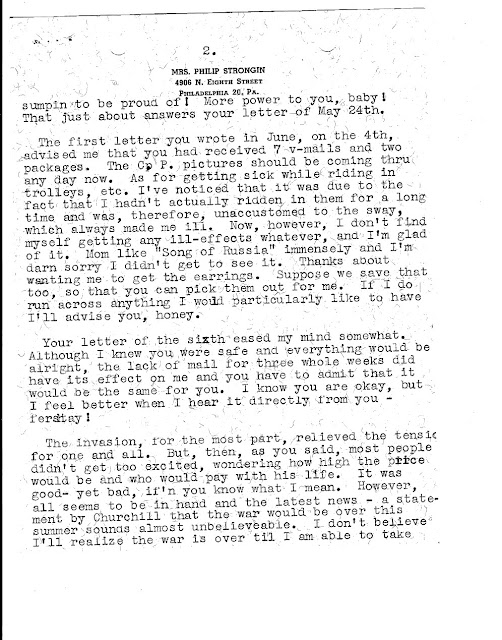 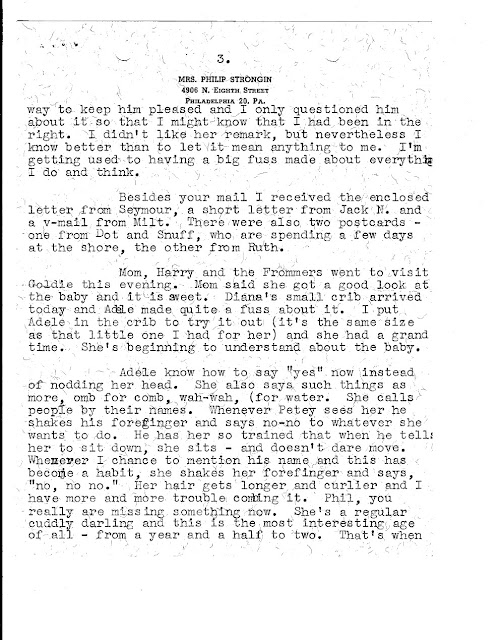 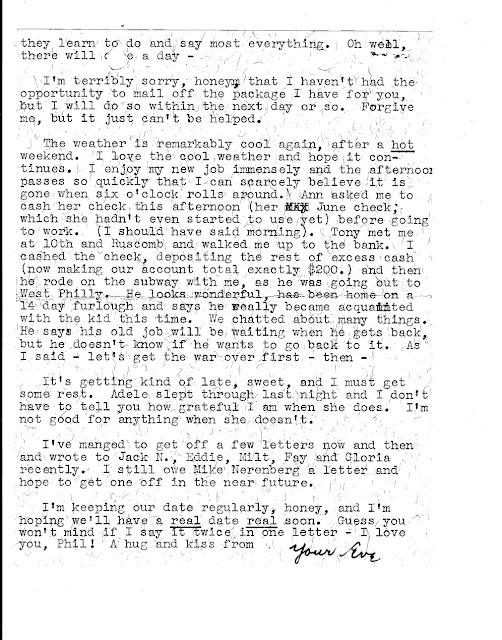 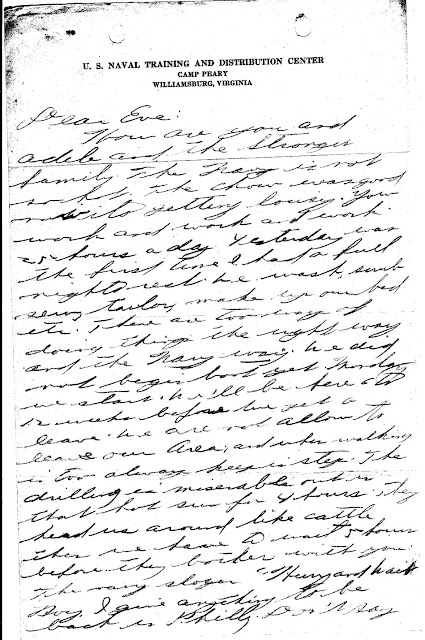 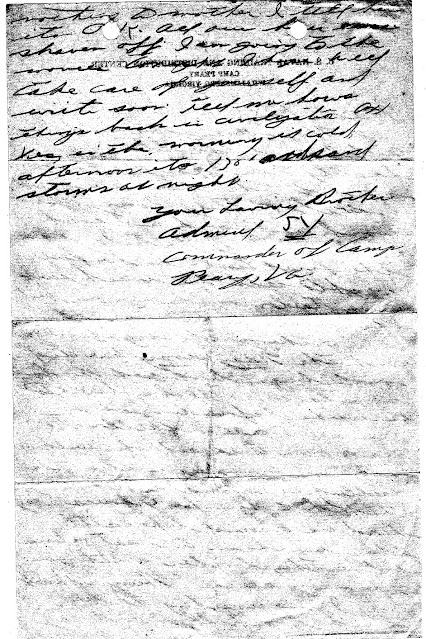 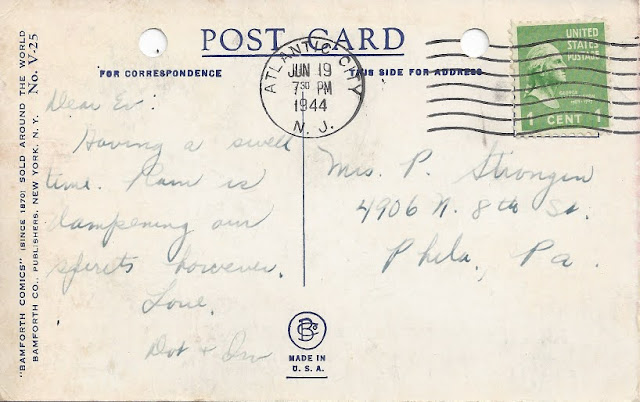 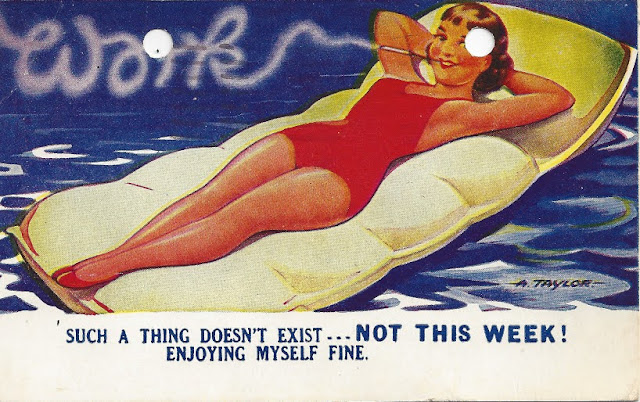 I meant to write this letter yesterday, as you will note by the date line. However, today is the 20th and it is just getting written. I have a lot to say (for a change) and want to get started right at the beginning.

I didn't get an opportunity to describe the Fathers Day dinner—did I? Well, first I want to say a word about my mother and daddy. They were here for the dinner and both of them looked fine. My mother wore the dress we bought her shortly before Adele was born (I wonder if you remember how pretty it is?) and white shoes. My dad wore a white sports shirt, the blue slacks I bought him for Father's Day and brown and white sports shoes. I don't think I remember my folks looking as well as they did that day in a long time.

Al's brother Ben who was also supposed to attend didn't show up. As it was the following people were seated about the table: Mr. & Mrs, Silver, Murray Silver, My mother and dad, Al and Ethel and Paul, Harry, Mom and myself. We had a lovely dinner consisting of the following: grapefruit with strawberry jelly centers, chopped liver on lettuce leaves, veg. soup, roasted meat and chicken, peas and carrots pickles, tomatoes, cole slaw, mashed potatoes, fruit salad, all sorts of soda, brandy and whiskey. Sounds good, doesn't it - and it was! After dinner, we sat a short while and then the Silvers departed. Ethel, Al and Paul left a short while later. Al was telling Harry and me that Stuart and Paul each have $1000 bonds. It seems like everyone you talk to has thousands these days. Al mentioned that they spelled Stuart's name "Stewart" on his birth certificate and it's too late to do anything about it.

Monday morning I arose feeling spry, though Adele had gotten me up more than eight times the previous night. I cleaned the entire house (light dusting, etc. and was finished at 10. I took Adele for a walk and met up with the mailman, who had a stack of mail for widdle me - goody, goody! Your letter to Phil, along with the one for me dated May 16 were piperoos and you needn't feel badly about not writing a special Mother's Day letter, honey, cause, as you say, it was not necessary and that letter to Phil certainly made interesting reading. At the same time, I received your letters of May 24, June 4th and June 6th. It was then time for me to leave for work and I hadn't sufficient time to read your mail. I read most of it on the subway going to work and coming home with my dad. I called Emma immediately and she came over last night to pick up the letter. I didn't feel tired til I had gotten Adele bathed and into her crib. After that I was exhausted and not even bothering to clean up the bathroom I stretched across the bed and caught myself a short nap. Mom woke me to tell me that Em was downstairs and it was a little after nine. I hurriedly cleaned the bathroom and then came down. We chatted til 10, then Em left. It started to pour shortly before 10, but let up enough to allow her to į return home.

And now for some comment on your letters, sweet. They did me a world of good and I feel deliciously happy about receiving so much of you at one time, Gosh, did I tell you I love you. I didn't!? Well, suppose I take time out and tell you, my dearest, that you are the sweetest thing this side of heaven and I love you ever so much!

So you turned out a perfect payroll. I don't think you made a bit todo about nothing - that is sumpin to be proud of! More power to you, baby! That just about answers your letter of May 24th.

The first letter you wrote in June, on the 4th, advised me that you had received 7 V-mails and two packages. The C. P. pictures should be coming thru any day now. As for getting sick while riding in trolleys, etc. I've noticed that it was due to the fact that I hadn't actually ridden in them for a long time and was, therefore, unaccustomed to the sway which always made me ill. Now, however, I don't find myself getting any ill-effects whatever, and I'm glad of it. Mom liked "Song of Russia" immensely and I'm darn sorry I didn't get to see it. Thanks about wanting me to get the earrings. Suppose we save that too, so that you can pick them out for me. If I do run across anything I would particularly like to have I’ll advise you, honey.

Your letter of the sixth eased my mind somewhat. Although I knew you were safe and everything would be alright, the lack of mail for three whole weeks did have its effect on me and you have to admit that it would be the same for you. I know you are okay, but I feel better when I hear it directly from you - fershtay!

The Invasion, for the most part, relieved the tension for one and all. But, then, as you said, most people didn't get too excited, wondering how high the price would be and who would pay with his life. It was good—yet bad, if'n you know what I mean. However, all seems to be in hand and the latest news - a statement by Churchill that the war would be over this summer sounds almost unbelieveable. I don't believe I'll realize the war is over til I am able to take
page missing
way to keep him pleased and I only questioned him about it. So that I might know that I had been in the right. I didn’t like her remark, but nevertheless I know better than to let it mean anything to me. I'm getting used to having a big fuss made about everything I do and think.

Besides your mail I received the enclosed letter from Seymour, a short letter from Jack N. and a v-mail from Milt. There were also two postcards - one from Dot and Snuff, who are spending a few days, at the shore, the other from Ruth.

Mom, Harry and the Frommers went to visit Goldie this evening. Mom said she got a good look at the baby and it is sweet. Diana's small crib arrived today and Adele made quite a fuss about it. I put Adele in the crib to try it out (it's the same size as that little one I had for her) and she had a grand time. She's beginning to understand about the baby.

Adele knows how to say "yes" now instead of nodding her head. She also says such things as more, omb for comb, wah-wah, (for water. She calls people by their names. Whenever Petey sees her he shakes his forefinger and says no-no to whatever she wants to do. He has her so trained that when he tells her to sit down, she sits - and doesn't dare move. Whenever I chance to mention his name and this has become a habit, she shakes her forefinger and says, "no, no no." Her hair gets longer and curlier and I have more and more trouble combing it. Phil, you really are missing something now. She's a regular cuddly darling and this is the most interesting age of all - from a year and a half to two. That's when they, learn to do and say most everything. Oh well, there will come a day -

I'm terribly sorry, honey, that I haven't had the opportunity to mail off the package I have for you,' but I will do so within the next day or so. Forgive me, but it just can’t be helped.

The weather is remarkably cool again, after a hot weekend. I love the cool weather and hope it continues. I enjoy my new job immensely and the afternoon passes so quickly that I can scarcely believe it is gone when six o'clock rolls around. Ann asked me to cash her check this afternoon (her June check, which she hadn't even started to use yet) before going to work. (I should have said morning). Tony met me at 10th and Ruscomb and walked me up to the bank. I cashed the check, depositing the rest of excess cash (now making our account total exactly $200,) and then he rode on the subway with me, as he was going out to West Philly. He looks wonderful, has been home on a 14 day furlough and says he really became acquainted with the kid this time. We chatted about many things. He says his old job will be waiting when he gets back, but he doesn't know if he wants to go back to it. As I said - let's get the war over first - then -
It's getting kind of late, sweet, and I must get some rest. Adele slept through last night and I don't have to tell you how grateful I am when she does. I’m not good for anything' when she doesn't.
I've managed to get off a few letters now and then and wrote to Jack N., Eddie, Milt, Fay and Gloria recently. I still owe Mike Nerenberg a letter and hope to get one off in the near future.

I'm keeping our date regularly, honey, and I'm hoping we'll have a real date real soon. Guess you won't mind if I say it twice in one letter - I love you, Phil! A hug and kiss from


How are you and Adele and the Strongin family? The Navy is not so hot. The chow was good, now it's getting lousy. You work and work and work—25 hours a day. Yesterday was the first time I had a full night's rest. We wash, scrub, serve, tailor, make up our bed, etc. There are two ways of doing things, the right way and the Navy way. We did not begin boot yet. Monday we start. We'll be here 6 to 12 weeks before we get a leave. We are not allowed to leave our area and when walking in two, always keep in step. The drilling is miserable out in that hot sun for 4 hours. They herd us around like cattle. Then we have to wait 5 hours before they bother with you. The Navy slogan “Hurry and Wait.” Boy, I'd give anything to be back in Philly. Don't say nothing to mother. I tell her it's O.K. All our hair was shaven off. I'm going to the movies tonight, I hope. Take care of yourself and write soon. Tell me hows things back in civilization. Oh yes, in the morning it's cold, afternoon it's 130° and storms at night.


Your loving brother,
Admiral SY
Commander of Camp Peary, Va.
Posted by Marilyn at 8:41 AM