Post #398 - June 23, 1944 Our Way Lay Thru Stratford-Upon-Avon, Which I Don’t Have to Tell You, is the Birthplace and Home of Shakespeare 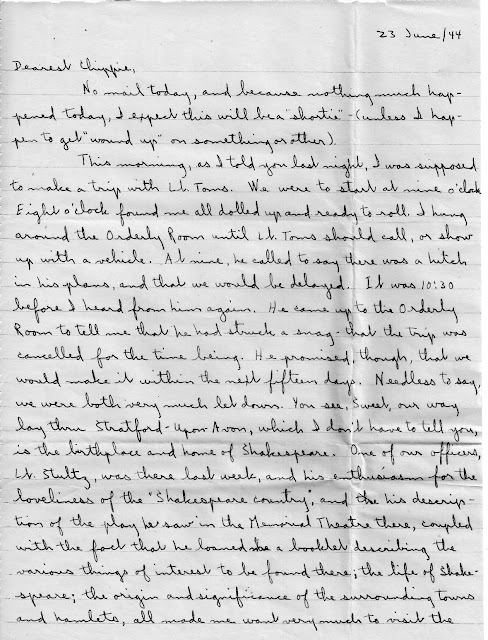 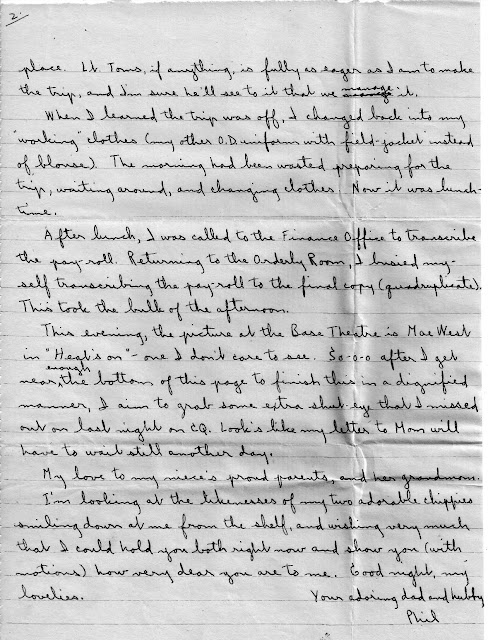 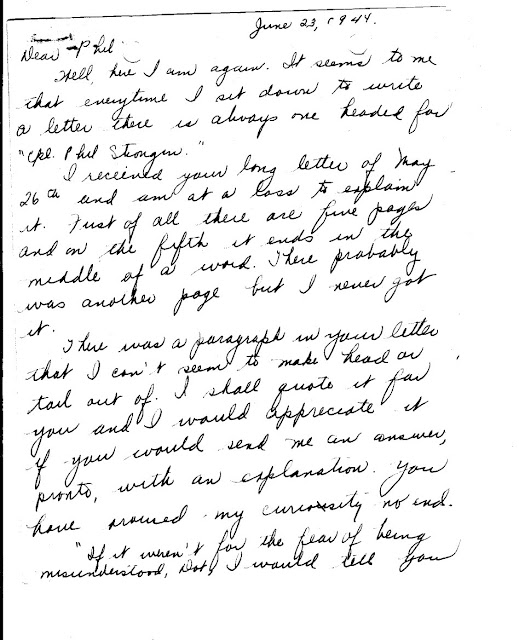 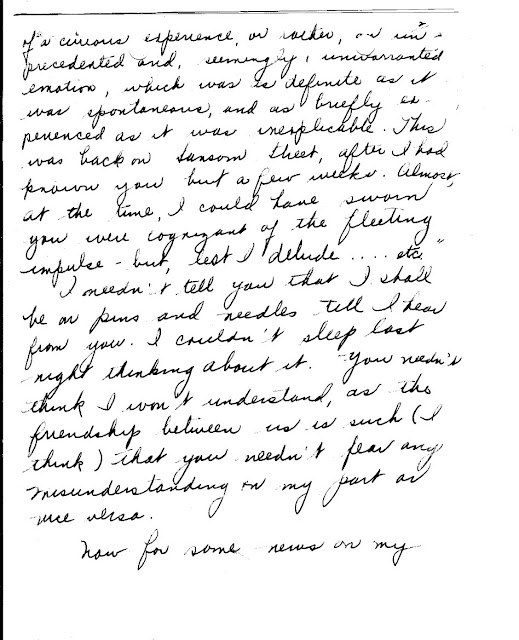 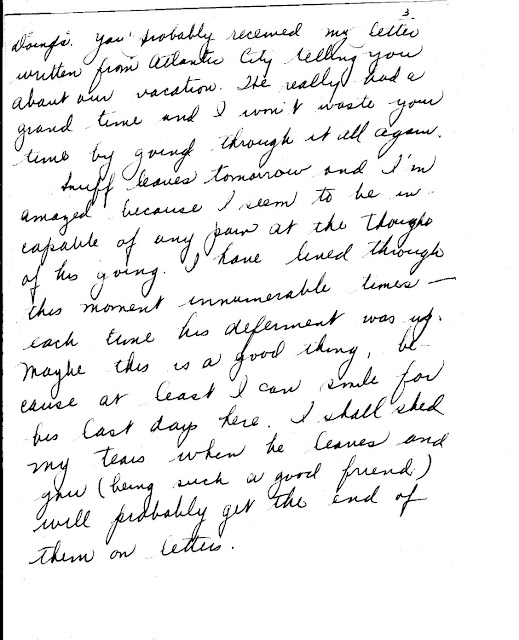 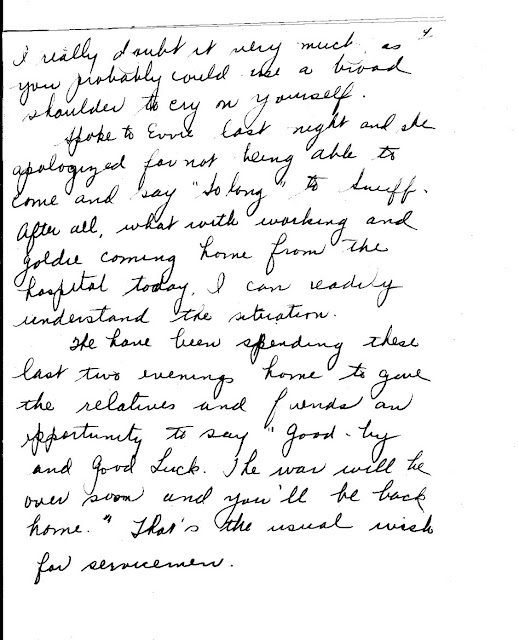 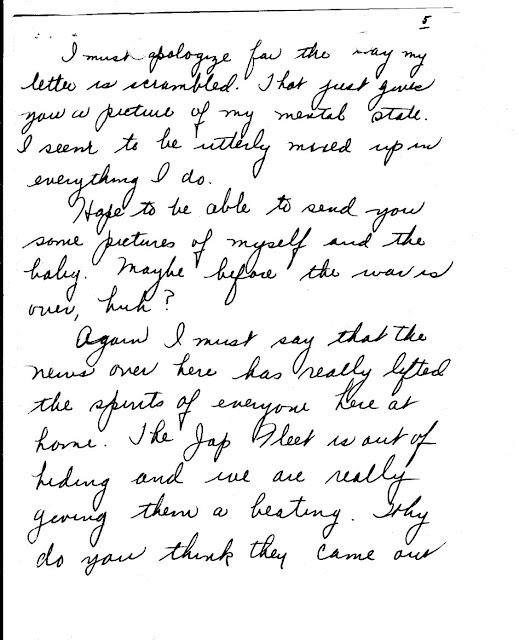 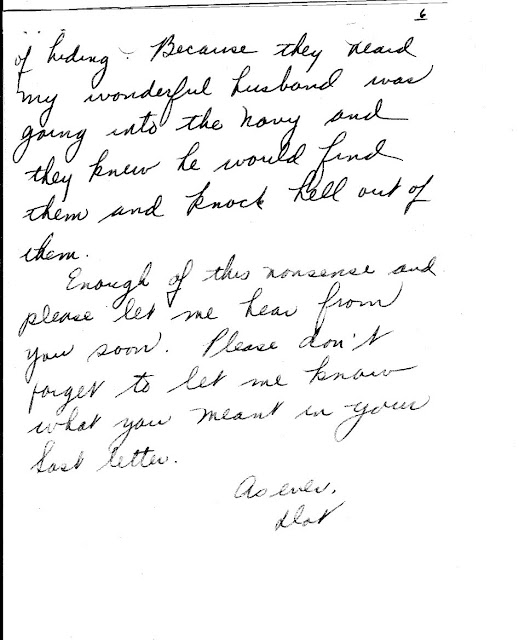 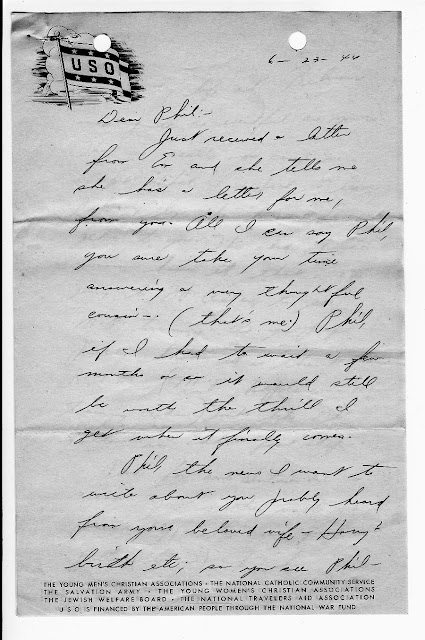 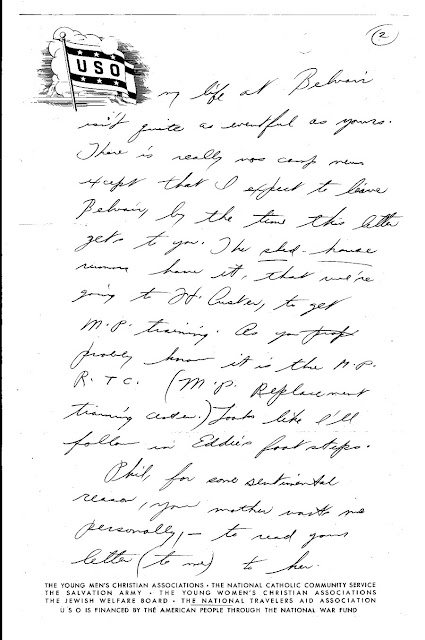 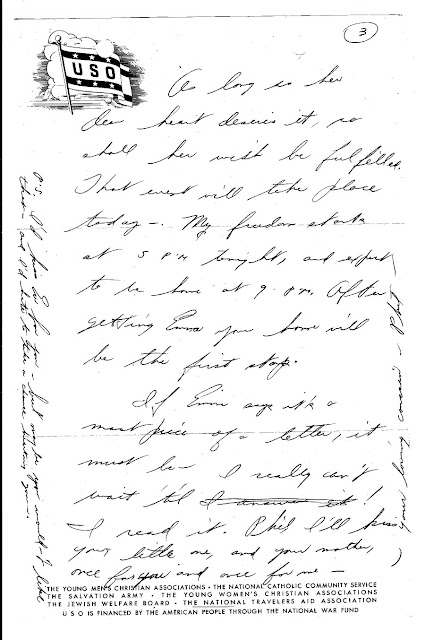 Dearest Chippie,
No mail today, and because nothing much happened today, I expect this will be a “shortie” (unless I happen to get "wound up" on something or other).
This morning, as I told you last night, I was supposed to make a trip with Lt. Toms. We were to start at nine o'clock. Eight o'clock found me all dolled up and ready to roll. I hung around the Orderly Room until Lt. Toms should call, or show up with a vehicle. At nine, he called to say there was a hitch in his plans, and that we would be delayed. It was 10:30 before I heard from him again. He came up to the Orderly Room to tell me that he had struck a snag—that the trip was cancelled for the time being. He promised, though, that we would make it within the next fifteen days. Needless to say, we were both very much let down. You see, Sweet, our way lay thru Stratford-Upon-Avon, which I don't have to tell you, is the birthplace and home of Shakespeare. One of our officers, Lt. Stultz, was there last week, and his enthusiasm for the loveliness of the "Shakespeare country,” and his description of the play he saw in the Memorial Theatre there, coupled with the fact that he loaned me a booklet describing the various things of interest to be found there; the life of Shakespeare; the origin and significance of the surrounding towns and hamlets, all made me want very much to visit the place. Lt. Toms, if anything, is fully as eager as I am to make the trip, and I'm sure he'll see to it that we manage it.

When I learned the trip was off, I changed back into my “working” clothes (my other O.D. uniform with field-jacket instead of blouse). The morning had been wasted preparing for the trip, waiting around, and changing clothes. Now it was lunch-time.
After lunch, I was called to the Finance Office to transcribe the pay-roll. Returning to the Orderly Room, I busied myself transcribing the payroll to the final copy (quadruplicate). This took the bulk of the afternoon.

This evening, the picture at the Base Theatre is Mae West in "Heats On "—one I don't care to see. So-o-o after I get near enough the bottom of this page to finish this in a dignified manner, I aim to grab some extra shut-eye that I missed out on last night on CQ. Look's like my letter to Mom will have to wait still another day.

My love to my niece's proud parents, and her grandmom.
I'm looking at the likenesses of my two adorable chippies smiling down at me from the shelf, and wishing very much that I could hold you both right now and show you (with motions) how very dear you are to me. Good night, my lovelies.

Your adoring dad and hubby
Phil
June 23, 1944
Dear Phil:
Well here I am again. It seems to me that every time I sit down to write a letter, there is always one headed for “Cpl. Phil Strongin.”
I received your long letter of May 26th and I'm at a loss to explain it. First of all, there are five pages and on the fifth it ends in the middle of a word. There probably was another page, but I never got it.
There was a paragraph in your letter that I can't seem to make head or tail out of. I shall quote it for you and I would appreciate it if you would send me an answer pronto with an explanation. You have aroused my curiosity no end.
“If it weren't for the fear of being misunderstood, Dot, I would tell you of a curious experience, or rather an unprecedented and, seemingly, unwarranted emotion which was as definite as it was spontaneous, and as briefly experienced as it was inexplicable. This was back on Sansom Street, after I had known you but a few weeks. Almost, at the time, I could have sworn you were cognizant of the fleeting impulse—but lest I delude.... etc.”
I needn’t tell you that I shall be on pins and needles till I hear from you. I couldn't sleep last night thinking about it. You needn’t think I won't understand, as the friendship between us is such, (I think) that you needn’t fear any misunderstanding on my part or vice versa.
Now for some news on my doings. You probably received my letter written from Atlantic City telling you about our vacation. We really had a grand time and I won't waste your time by going through it all again.
Snuff leaves tomorrow and I'm amazed because I seem to be incapable of any pain at the thought of his going. I have lived through this moment innumerable times—each time his deferment was up. Maybe this is a good thing, because at least I can smile for his last days here. I shall shed my tears when he leaves, and you, being such a good friend will probably get the end of them on letters.
I really doubt it very much as you probably could use a broad shoulder to cry on yourself.
Spoke to Evvie last night and she apologized for not being able to come and say “so long” to Snuff. After all, what with working and Goldie coming home from the hospital today. I can readily understand the situation.
We have been spending these last two evenings home to give the relatives and friends an opportunities to say good-bye and good luck. “The war will be over soon and you'll be back home.” That's the usual wish for servicemen.
I must apologize for the way my letter is scrambled. That just gives you a picture of my mental state. I seem to be utterly mixed up in everything I do.
Hope to be able to send you some pictures of myself and the baby. Maybe before the war is over, huh?
Again, I must say that the news over here has really lifted the spirits of everyone here at home. The Jap fleet is out of hiding and we are really giving them a beating. Why do you think they came out of hiding?—Because they heard my wonderful husband was going into the Navy and they knew he would find them and knock hell out of them.
Enough of this nonsense and please let me hear from you soon. Please don't forget to let me know what you meant in your last letter.
As ever,
Dot
6-23-1944
Dear Phil:
Just received a letter from Ev and she tells me she has a letter for me from you. All I can say Phil, you sure take your time answering a very thoughtful cousin (that's me.) Phil, if I had to wait a few months or so, it would still be worth the thrill I get when it finally comes.
Phil, the news. I want to write about you probably heard from your beloved wife, Harry’s birth etc.; so you are so you see, Phil—my life at Belvoir isn't quite as eventful as yours.
There is really no camp news, except that I expect to leave Belvoir by the time this letter gets to you. The shed-house rumors have it that we're going to Ft. Custer to get M.P. training. As you probably know it is the M.P. R.T.C. (M.P. Replacement Training Center) Looks like I'll follow in Eddie's footsteps.
Phil, for some sentimental reason your mother wants me personally—to read your letter (to me) to her.
As long as her dear heart desires it, so shall her wish be fulfilled. That event will take place today.—My freedom starts at 5 P.M. tonight, and expect to be home at 9 P.M. After getting Emma, your home will be the first stop.
If Emma says it's a masterpiece of a letter, it must be. I really can't wait ’til I read it. Phil, I'll kiss your little one, and your mother, once for you and once for me—
PS. I'd kiss Ev for you, but maybe you wouldn’t like this and I'd hate to take chance hurting you.
Your loving cousin,
Phil
Page Missing
Begins with Page Two

you're about it, that she hasn't get answered my last letter.

My brief period of comparative inactivity will be ended tomorrow, 'cause I'll have to start compiling the Company History then. I'm hoping to make this one really worth-while. I have allowed myself five days for the job. It should be sufficient, even if I am sidetracked temporarily by other work.

Was reading the May “Esquire" when I chanced on a story by Milton Mazer, a doctor, Philadelphian, graduate of U. of P., now a lieutenant in the Medical Corps. It struck me he might be one of the Mazer boys who live across the driveway. On second thought, I'll send the clipping and his picture along. I'm curious.

I'm still waiting to hear from Lil. Has she recovered from her recent indisposition yet?

Does Jean ever write? How is Helen doing these days? What's new around the neighborhood—if any? How are the Frommers feeling these days? Is the punkin as fond of them as I am?
You said that Bob was singing at the Stork Club, but haven't told me anything since. I'd like to know how he's doing, what type of songs he is singing, to what accompaniment, etc. My love to the Liebermans next time you see them—and you still haven’t sent me their new address. Is "Link" still putting on weight? How are Barbara and Phyllis developing. I still don't believe Phyllis could possibly be prettier than "Bub."

You may tell Rae and Mickey for me that if they don't soon drop me a line, I'll change my mind about requesting them to send along some candy. (That oughta bring ’em around—don't you think?)

How is Paul behaving now that Stuart is the center of attraction? How often do Ben and Harry write? I haven't had an answer to my last letter to Limey, but am not surprised. He must be pretty busy these days.

How are Mom and Pop Paller getting along since he started on his new job? You must know, Chippie, how pleased I am that the cause for dissension between them has been eliminated.

Waiting to hear more about Diana Jean, Goldie, Harry, and company. Hope my letter to them was well-received.

Tell Dot her letter will follow soon. She has been kind in dropping me a line so frequently. Guess Snuff is really “in” this time. But I don't think it'll be too many months before he's home again. I don't have to ask you to keep in even closer touch with Dot, now that Snuff has gone, ’cause I know you will, anyway.

No questions about the punkin just a great big ache for her in my breast—And for you, too, my little—Chippie.
Your Phil loves you both so very, very much.
Posted by Marilyn at 11:27 AM