Post #399 - June 24, 1944 I was Walking Down One of the Paths, Thinking About Nothing in Particular, when Bingo!—an Idea Struck Me 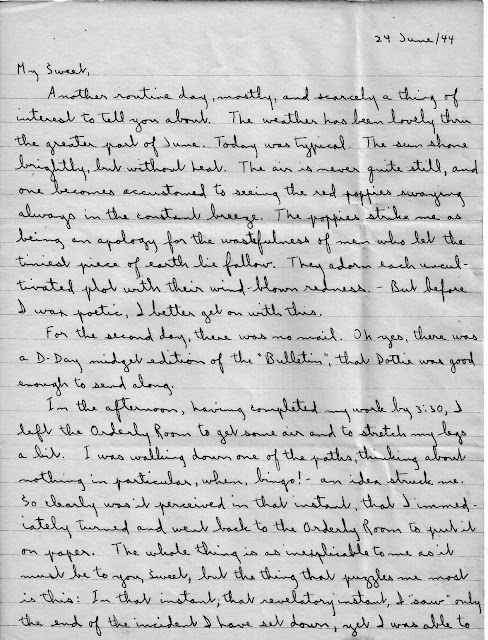 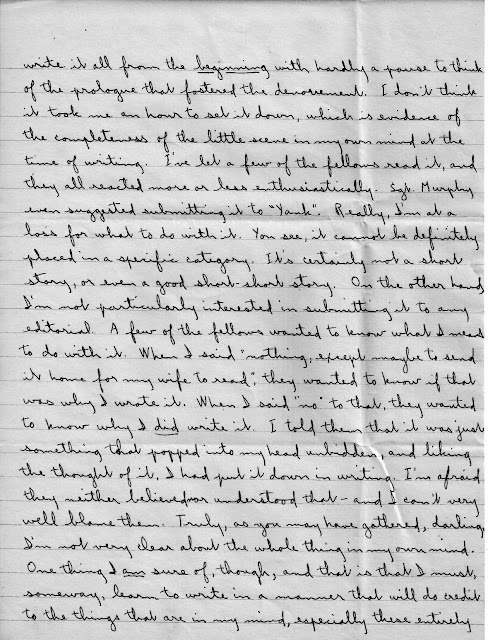 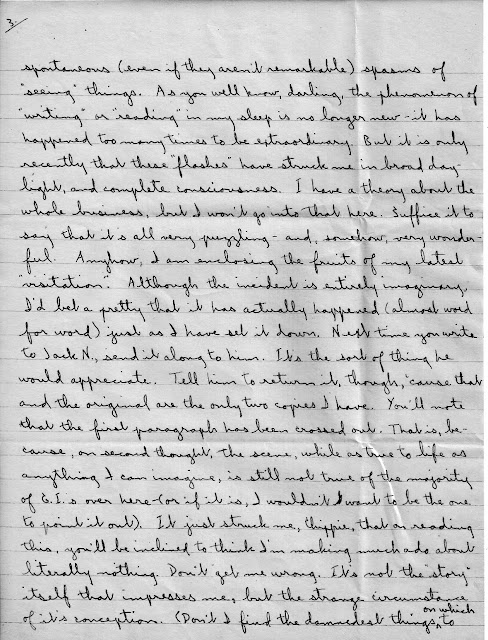 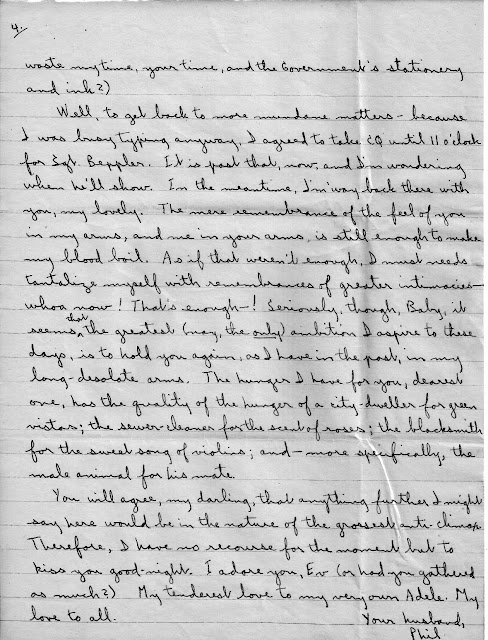 My Sweet,
Another routine day, mostly, and scarcely a thing of interest to tell you about. The weather has been lovely thru the greater part of June. Today was typical. The sun shone brightly, but without heat. The air is never quite still, and one becomes accustomed to seeing the red poppies swaying always in the constant breeze. The poppies strike me as being an apology for the wastefulness of men who let the tiniest piece of earth lie fallow. They adorn each uncultivated plot with their wind-blown redness. But before I wax poetic, I better get on with this.
For the second day, there was no mail. Oh yes, there was a D-Day midget edition of the “Bulletin", that Dottie was good enough to send along.
In the afternoon, having completed my work by 3:30, I left the Orderly Room to get some air and to stretch my legs a bit. I was walking down one of the paths, thinking about nothing in particular, when, bingo!—an idea struck me. So clearly was it perceived in that instant, that I immediately turned and went back to the Orderly Room to put it on paper. The whole thing is as inexplicable to me as it much be to you, Sweet, but the thing that puzzles me most is this: In that instant, that revelatory instant, I “saw" only the end of the incident I have set down, yet I was able to write it all from the beginning with hardly a pause to think of the prologue that fostered the denouement. I don't think it took me an hour to set it down, which is evidence of the completeness of the little scene in my own mind at the time of writing. I've let a few of the fellows read it, and they all reacted more or less enthusiastically. Sgt. Murphy even suggested submitting it to "Yank". Really, I’m at a loss for what to do with it. You see, it cannot be definitely placed in a specific category. It's certainly not a short story, or even a good short-short story. On the other hand I'm not particularly interested in submitting it to any editorial. A few of the fellows wanted to know what I mean to do with it. When I said "nothing, except maybe to send it home for my wife to read,” they wanted to know if that was why I wrote it. When I said no to that, they wanted to know why I did write it. I told them that it was just something that popped into my head unbidden, and liking the thought of it, I had put it down in writing. I'm afraid they neither believed nor understood that—and I can't very well blame them. Truly, as you may have gathered, darling, I’m not very clear about the whole thing in my own mind. One thing I am sure of, though, and that is that I must, someway, learn to write in a manner that will do credit to the things that are in my mind, especially these entirely spontaneous (even if they aren’t remarkable) spasms of “seeing" things. As you well know, darling, the phenomenon of “writing" or “reading” in my sleep is no longer new—it has happened too many times to be extraordinary. But it is only recently that these “flashes" have struck me in broad day-light, and complete consciousness. I have a theory about the whole business, but I won't go into that here. Suffice it to say that it is all very puzzling—and somehow, very wonderful. Anyhow, I am enclosing the fruits of my latest “visitation.” Although the incident is entirely imaginary I'd bet a pretty penny that it has actually happened (almost word for word) just as I have set it down. Next time you write to Jack N., send it along to him. It is the sort of thing he would appreciate. Tell him to return it, though, ’cause that and the original are the only two copies I have. You'll note that the first paragraph has been crossed out. That is, because, on second thought, the scene, while as true to life as anything I can imagine, is still not true of the majority of G.I.’s over here—(or if it is, I wouldn't want to be the one to point it out). It just struck me, Chippie, that on reading this, you'll be inclined to think i'm making much ado about literally nothing. Don't get me wrong. It's not the story itself that impresses me, but the strange circumstance of its conception. (Don't I find the damnedest things on which to waste my time, your time, and the Government's stationery and ink?)
Well, to get back to more mundane matters—because I was busy typing anyway, I agreed to take CQ until 11 o'clock for Sgt. Beppler. It is past that, now, and I'm wondering when he'll show. In the meantime, I'm way back there with you, my lovely. The mere remembrance of the feel of you in my arms, and me in your arms, is still enough to make my blood boil. As if that weren't enough, I must needs tantalize myself with remembrances of greater intimacies—whoa now! That's enough—! Seriously, though, Baby, it seems that the greatest (nay, the only) ambition I aspire to these days, is to hold you again, as I have in the past, in my long-desolate arms. The hunger I have for you, dearest one, has the quality of the hunger of a city-dweller for green vistas; the sewer-cleaners for the scent of roses, the blacksmith for the sweet song of violins; and more specifically, the male animal for his mate.

You will agree, my darling, that anything further I might say here would be in the nature of the grossest anti-climax. Therefore, I have no recourse for the moment but to kiss you good-night. I adore you, Ev (or had you gathered as much?). My tenderest love to my very own Adele. My love to all.

Your husband,
Phil
Posted by Marilyn at 8:57 AM