Post #400 - June 25, 1944 A Flash has Come Over the Radio that Cherbourg has Fallen and that Today was an Exceptionally Bad One for Berlin and I Can Imagine Circumstances that Would Allow Me to be Home for the Punkin’s Second Birthday 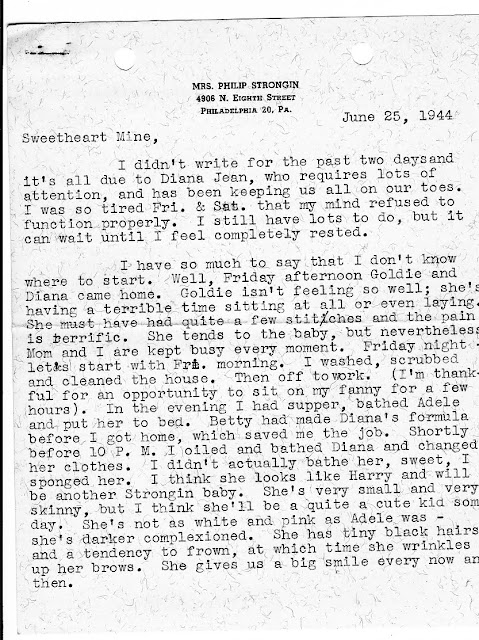 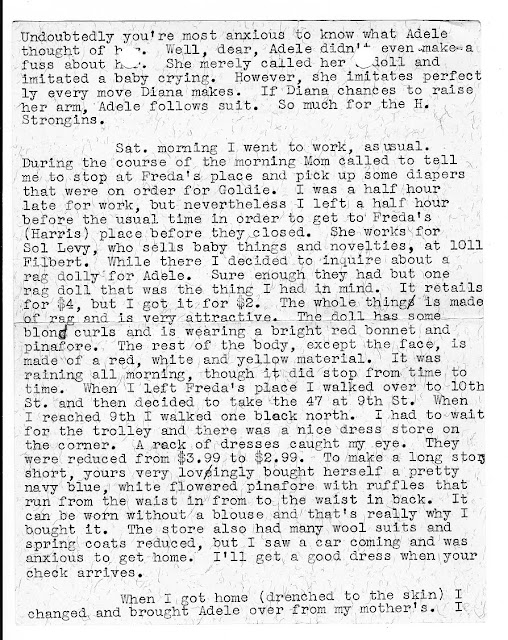 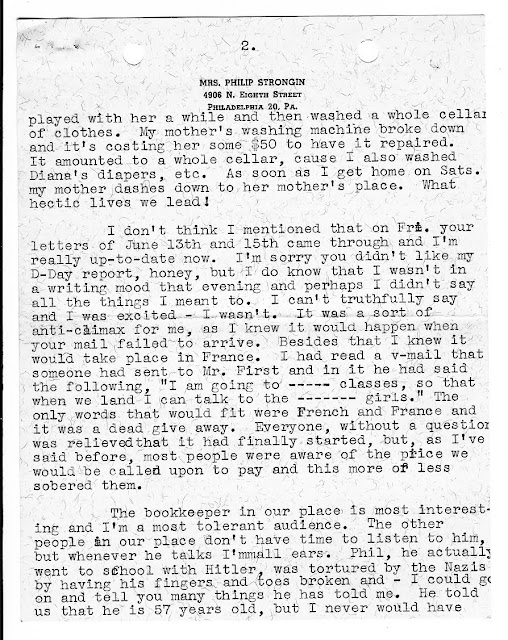 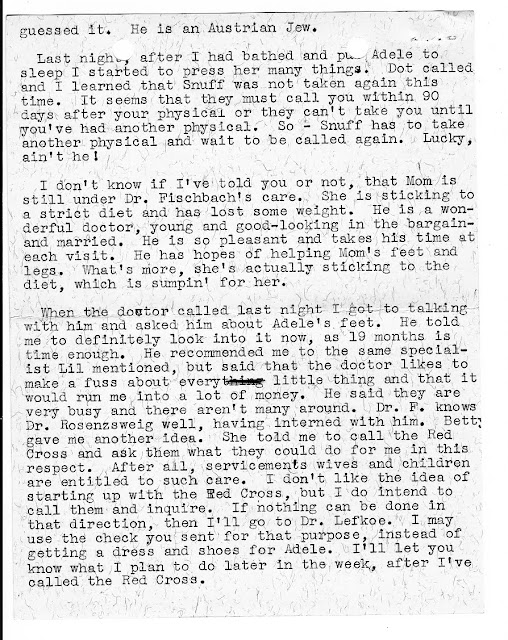 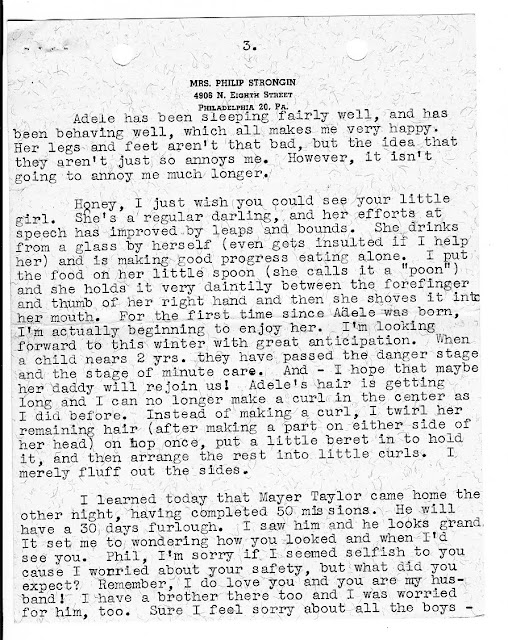 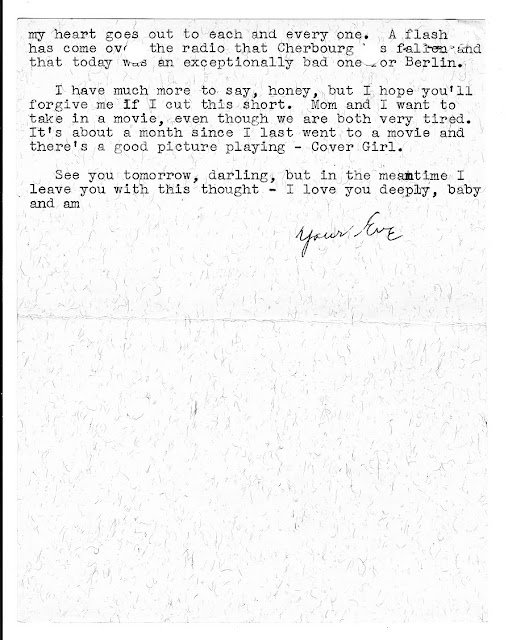 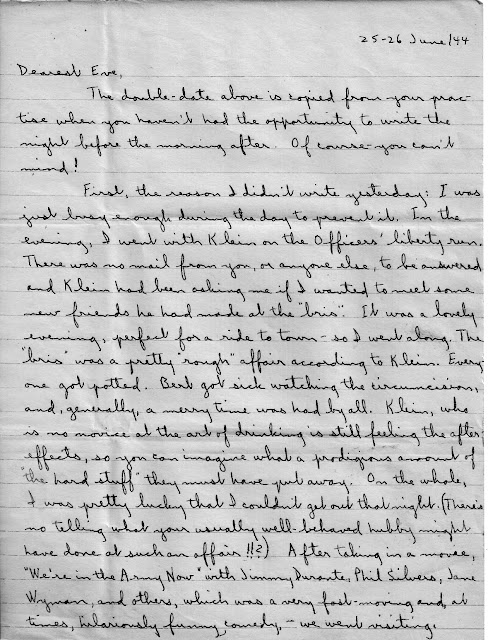 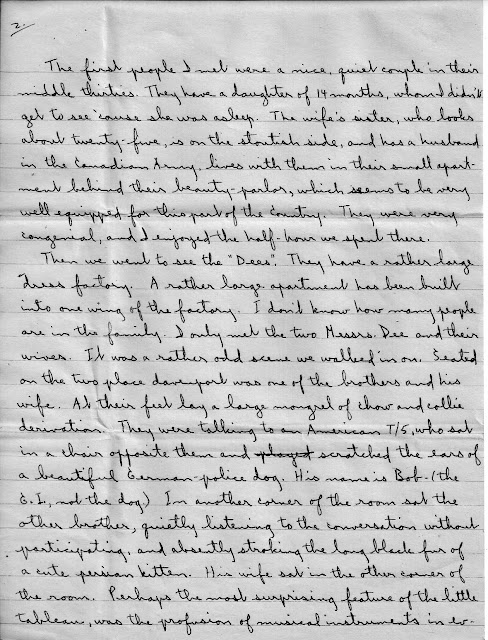 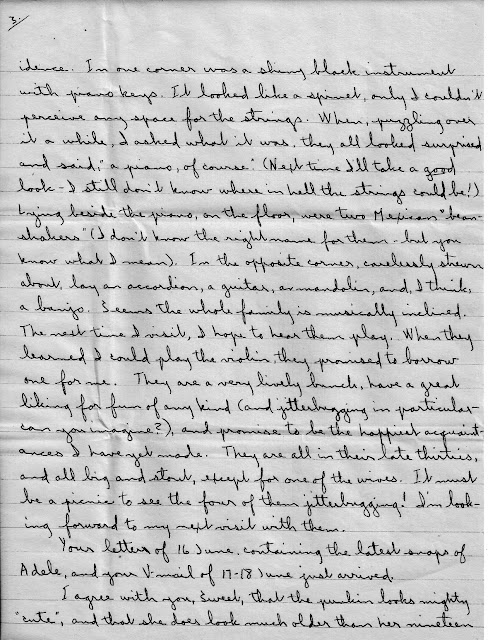 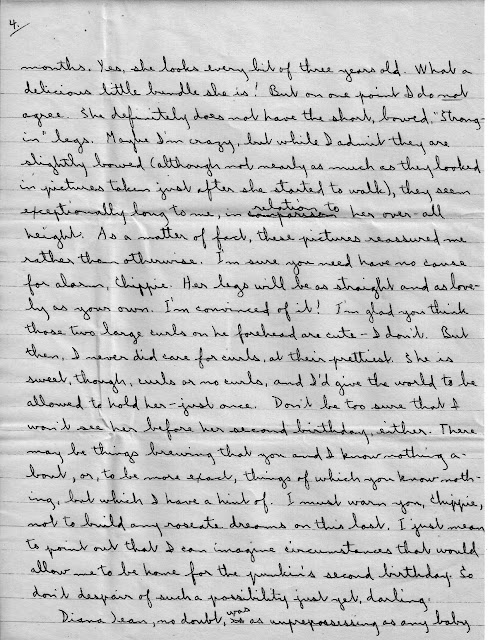 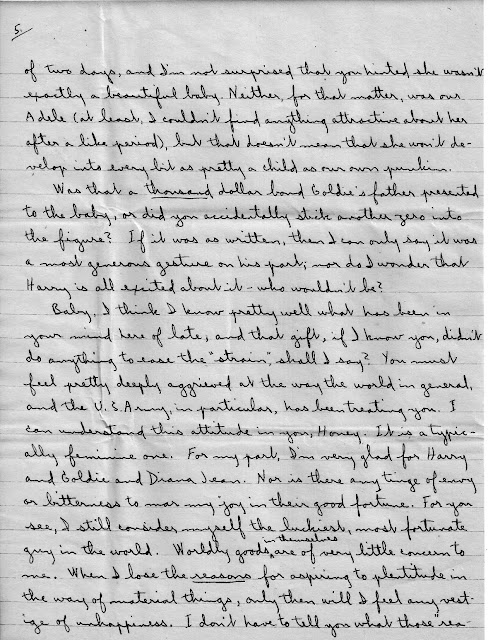 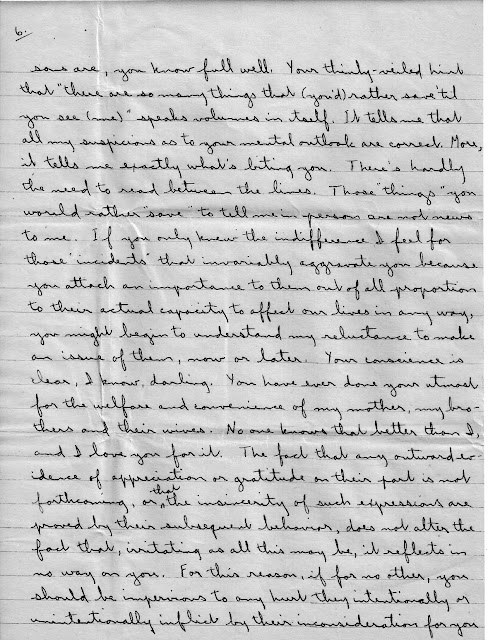 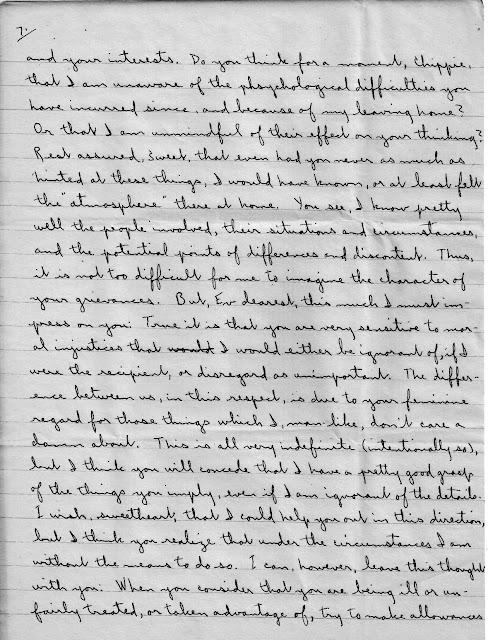 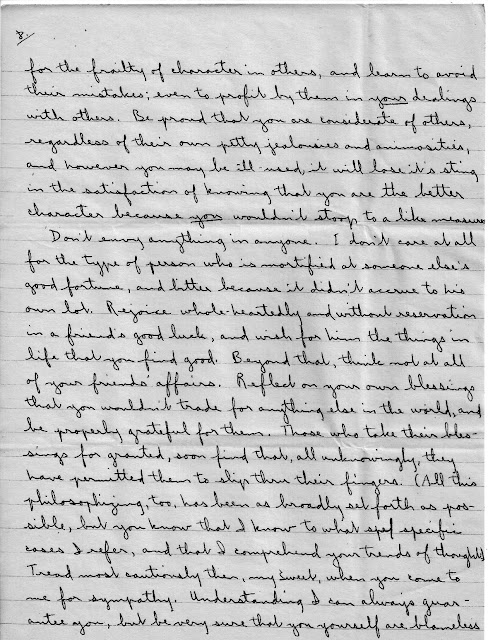 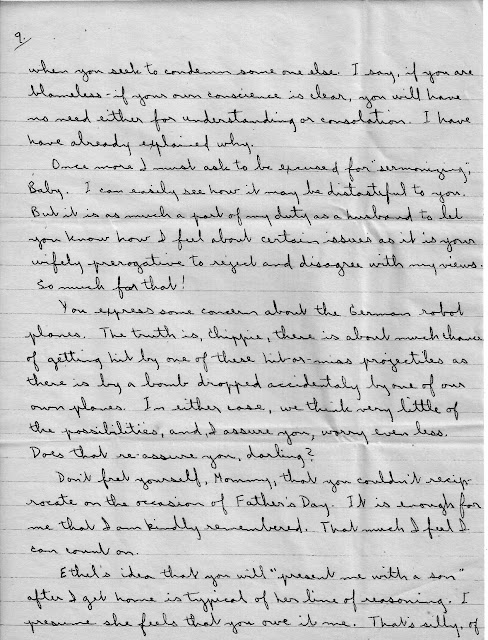 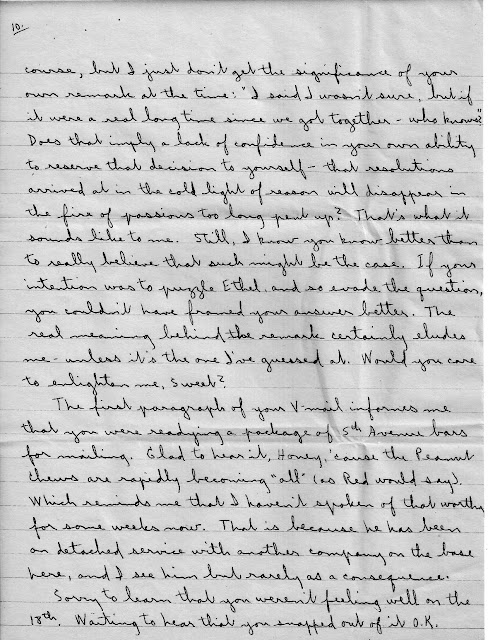 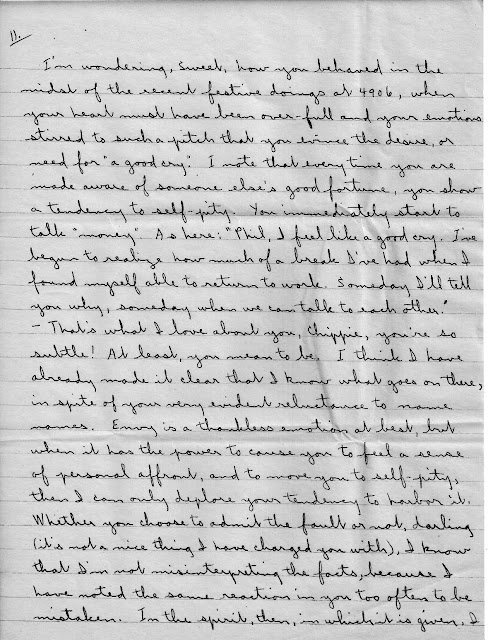 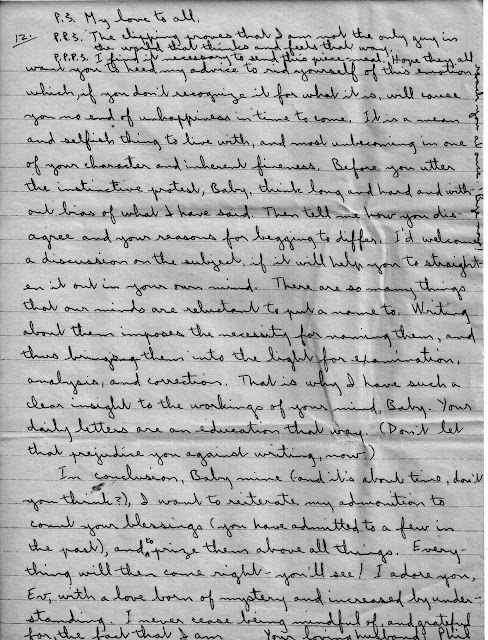 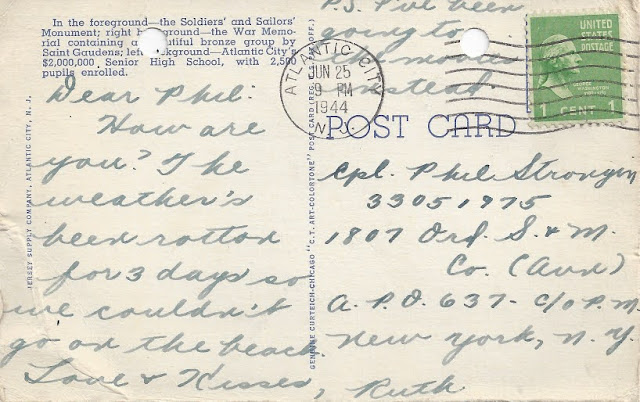 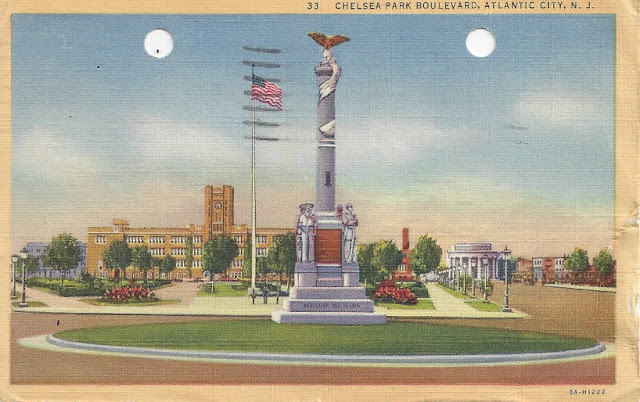 I didn't write for the past two days and it's all due to Diana Jean, who requires lots of attention, and has been keeping us all on our toes. I was so tired Fri. & Sat. that my mind refused to function properly. I still have lots to do, but it can wait until I feel completely rested.

I have so much to say that I don't know where to start. Well, Friday afternoon Goldie and Diana came home. Goldie isn't feeling so well; she's having a terrible time sitting at all or even laying. She must have had quite a few stitches and the pain is terrific. She tends to the baby, but nevertheless Mom and I are kept busy every moment. Friday night—let’s start with Fri. morning. I washed, scrubbed and cleaned the house. Then off to work. (I'm thankful for an opportunity to sit on my fanny for a few hours). In the evening I had supper, bathed Adele and put her to bed. Betty had made Diana's formula before I got home, which saved me the job. Shortly before 10 P. M. I oiled and bathed Diana and changed her clothes. I didn't actually bathe her, sweet, I sponged her. I think she looks like Harry and will be another Strongin baby. She's very small and very skinny, but I think she'll be a quite a cute kid someday. She's not as white and pink as Adele was—she's darker complexioned. She has tiny black hairs and a tendency to frown, at which time she wrinkles up her brows. She gives us a big smile every now and then.

Undoubtedly you're most anxious to know what Adele thought of her. Well, dear, Adele didn't even make a fuss about her. She merely called her a doll and imitated a baby crying. However, she imitates perfectly every move Diana makes. If Diana chances to raise her arm, Adele follows suit. So much for the H. Strongins.

Sat. morning I went to work, as usual. During the course of the morning Mom called to tell me to stop at Freda's place and pick up some diapers that were on order for Goldie. I was a half hour late for work, but nevertheless I left a half hour before the usual time in order to get to Freda's (Harris) place before they closed. She works for Sol Levy, who sells baby things and novelties, at 1011 Filbert. While there I decided to inquire about a rag dolly for Adele. Sure enough they had but one rag doll that was the thing I had in mind. It retails for $4, but I got it for $2. The whole things is made of rag and is very attractive. The doll has some blonde curls and is wearing a bright red bonnet and pinafore. The rest of the body, except the face, is made of a red, white and yellow material. It was raining all morning, though it did stop from time to time. When I left Freda's place I walked over to 10th St. and then decided to take the 47 at 9th St. When I reached 9th I walked one black north. I had to wait for the trolley and there was a nice dress store on the corner. A rack of dresses caught my eye. They were reduced from $3.99 to $2.99. To make a long story short, yours very lovingly bought herself a pretty navy blue, white flowered pinafore with ruffles that run from the waist in front to the waist in back. It can be worn without a blouse and that's really why I bought it. The store also had many wool suits and spring coats reduced, but I saw a car coming and was anxious to get home. I'll get a good dress when your check arrives.

When I got home (drenched to the skin) I changed and brought Adele over from my mother's. I played with her a while and then washed a whole cellar of clothes. My mother's washing machine broke down and it's costing her some $50 to have it repaired. It amounted to a whole cellar, cause I also washed Diana's diapers, etc. As soon as I get home on Sats. my mother dashes down to her mother's place. What hectic lives we lead!

I don't think I mentioned that on Fri. your letters of June 13th and 15th came through and I'm really up-to-date now. I'm sorry you didn't like my D-Day report, honey, but I do know that I wasn't in a writing mood that evening and perhaps I didn't say all the things I meant to. I can't truthfully say and I was excited—I wasn't. It was a sort of anti-climax for me, as I knew it would happen when your mail failed to arrive. Besides that I knew it would take place in France. I had read a v-mail that someone had sent to Mr. First and in it he had said the following, "I am going to ----- classes, so that when we land I can talk to the ------ girls." The only words that would fit were French and France and it was a dead give away. Everyone, without a question was relieved that it had finally started, but, as I've said before, most people were aware of the price we would be called upon to pay and this more or less sobered them.

The bookkeeper in our place is most interesting and I'm a most tolerant audience. The other people in our place don't have time to listen to him, but whenever he talks I'm all ears. Phil, he actually went to school with Hitler, was tortured by the Nazis by having his fingers and toes broken and—I could go on and tell you many things he has told me. He told us that he is 57 years old, but I never would have guessed it. He is an Austrian Jew.

Last night after I had bathed and put Adele to sleep I started to press her many things. Dot called and I learned that Snuff was not taken again this time. It seems that they must call you within 90 days after your physical or they can't take you until you've had another physical. So—Snuff has to take another physical and wait to be called again. Lucky ain't he!

I don't know if I've told you or not, that Mom is still under Dr. Fischbach's care. She is sticking to a strict diet and has lost some weight. He is a wonderful doctor, young and good-looking in the bargain and married. He is so pleasant and takes his time at each visit. He has hopes of helping Mom's feet and legs. What's more, she's actually sticking to the diet, which is sumpin' for her.

When the doctor called last night I got to talking with him and asked him about Adele's feet. He told me to definitely look into it now, as 19 months is time enough. He recommended me to the same specialist Lil mentioned, but said that the doctor likes to make a fuss about everything little thing and that it would run me into a lot of money. He said they are very busy and there aren't many around. Dr. F. knows Dr. Rosenzsweig well, having interned with him. Betty gave me another idea. She told me to call the Red Cross and ask them what they could do for me in this respect. After all, servicemen’s wives and children are entitled to such care. I don't like the idea of starting up with the Red Cross, but I do intend to call them and inquire. If nothing can be done in that direction, then I'll go to Dr. Lefkoe. I may use the check you sent for that purpose, instead of getting a dress and shoes for Adele. I'll let you know what I plan to do later in the week, after I've called the Red Cross.

Adele has been sleeping fairly well, and has been behaving well, which all makes me very happy. Her legs and feet aren't that bad, but the idea that they aren't just so annoys me. However, it isn't going to annoy me much longer,

Honey, I just wish you could see your little girl. She's a regular darling, and her efforts at speech has improved by leaps and bounds. She drinks from a glass by herself (even gets insulted if I help her) and is making good progress eating alone. I put the food on her little spoon (she calls it a "poon") and she holds it very daintily between the forefinger and thumb of her right hand and then she shoves it into her mouth. For the first time since Adele was born, I'm actually beginning to enjoy her. I'm looking forward to this winter with great anticipation. When a child nears 2 yrs. they have passed the danger stage and the stage of minute care. And—I hope that maybe her daddy will rejoin us! Adele's hair is getting long and I can no longer make a curl in the center as I did before. Instead of making a curl, I twirl her remaining hair (after making a part on either side of her head) on top once, put a little beret in to hold it, and then arrange the rest into little curls. I merely fluff out the sides.

I learned today that Mayer Taylor came home the other night, having completed 50 missions. He will have a 30 days furlough. I saw him and he looks grand. It set me to wondering how you looked and when I'd see you. Phil, I'm sorry if I seemed selfish to you cause I worried about your safety, but what did you expect? Remember, I do love you and you are my husband ! I have a brother there too and I was worried for him, too. Sure I feel sorry about all the boys—my heart goes out to each and every one. A flash has come over the radio that Cherbourg has fallen and that today was an exceptionally bad one for Berlin.

I have much more to say, honey, but I hope you'll forgive me if I cut this short. Mom and I want to take in a movie, even though we are both very tired. It's about a month since I last went to a movie and there's a good picture playing—Cover Girl.

See you tomorrow, darling, but in the meantime I leave you with this thought—I love you deeply, baby and am