Post #402 - June 27, 28, 1944 Looking After Goldie and the Baby is a Big Job and I’ve Again Lost My Taste for Having a Baby and Soon as I Finish This, I’m Going to Change Into My “Class A’s,” and Ride Down to the Aero Club to Watch the Jitter-bugs Do Their Stuff at the Regular Wednesday Night Dance 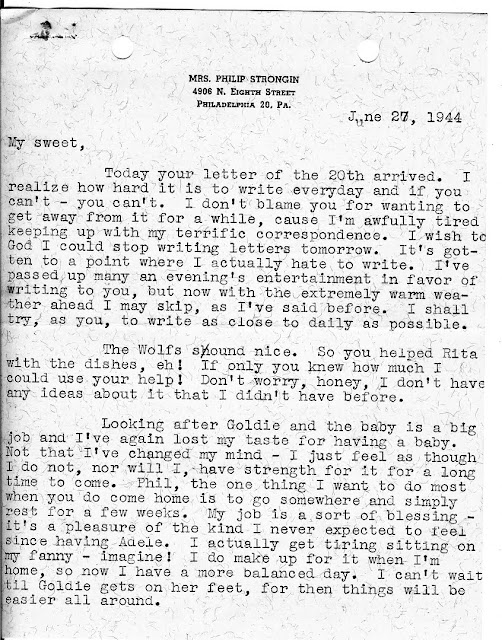 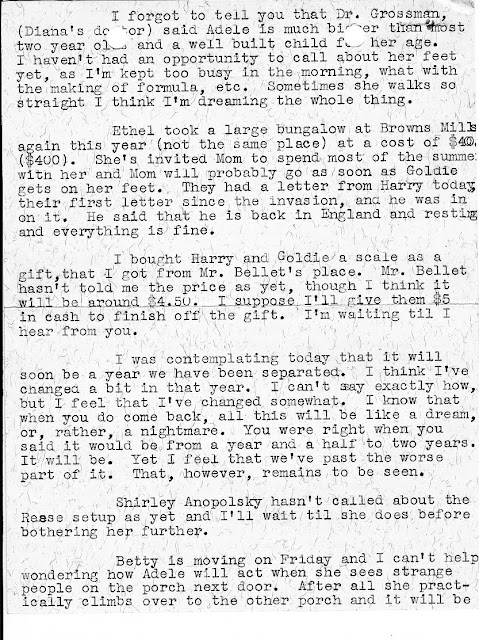 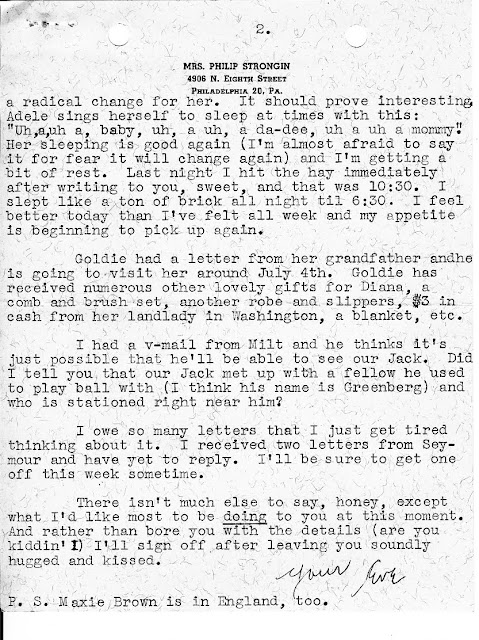 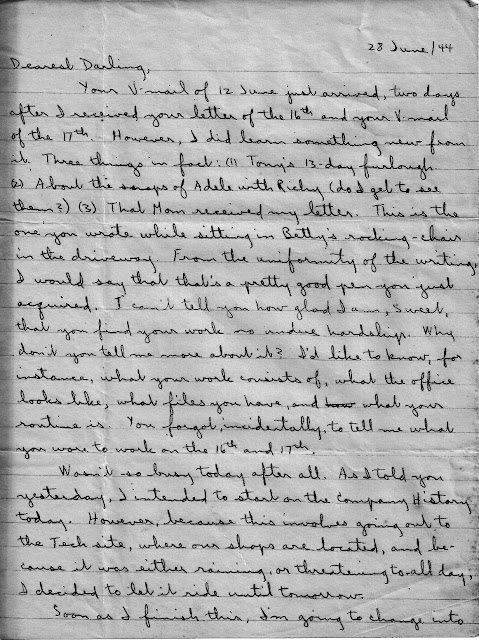 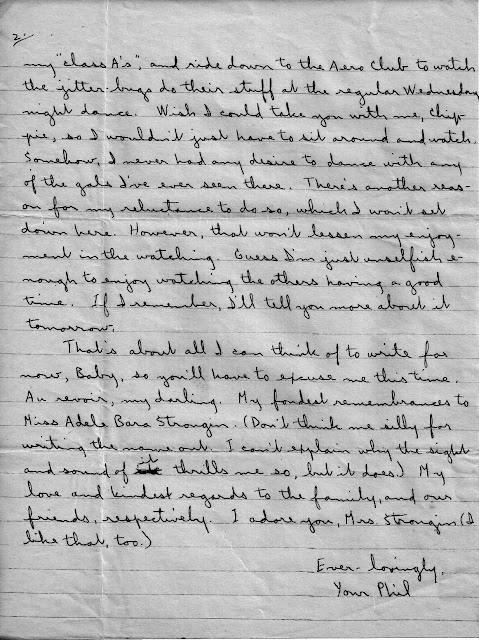 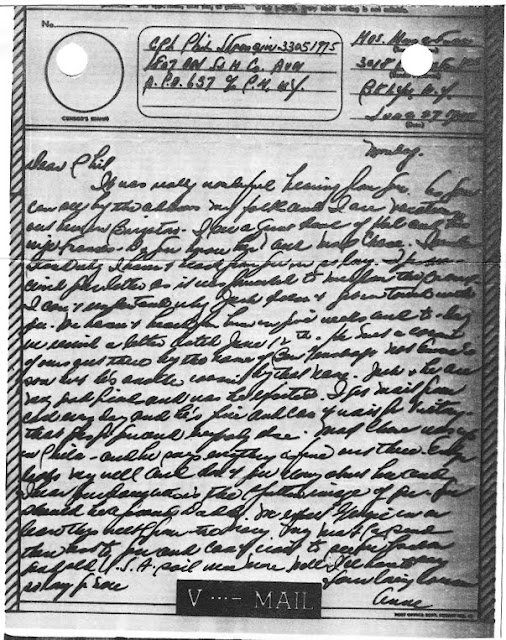 Today your letter of the 20th arrived. I realize how hard it is to write everyday and if you can't - you can't. I don't blame you for wanting to get away from it for a while, cause I'm awfully tired keeping up with my terrific correspondence. I wish to God I could stop writing letters tomorrow. It's gotten to a point where I actually hate to write. I've passed up many an evening's entertainment in favor of writing to you, but now with the extremely warm weather ahead I may skip, as I've said before. I shall try, as you, to write as close to daily as possible.

The Wolfs sound nice. So you helped Rita with the dishes, eh! If only you knew how much I could use your help! Don't worry, honey, I don't have any ideas about it that I didn't have before.

Looking after Goldie and the baby is a big job and I've again lost my taste for having a baby. Not that I've changed my mind - I just feel as though I do not, nor will I, have strength for it for a long time to come. Phil, the one thing I want to do most when you do come home is to go somewhere and simply rest for a few weeks. My job is a sort of blessing - it's a pleasure of the kind I never expected to feel since having Adele. I actually get tiring sitting on my fanny - imagine! I do make up for it when I'm home, so now I have a more balanced day. I can't wait til Goldie gets on her feet, for then things will be easier all around.

I forgot to tell you that Dr. Grossman, (Diana's doctor) said Adele is much bigger than most two year olds and a well built child for her age. I haven't had an opportunity to call about her feet yet, as I'm kept too busy in the morning, what with the making of formula, etc. Sometimes she walks so straight I think I'm dreaming the whole thing.

Ethel took a large bungalow at Browns Mills again this year (not the same place) at a cost of $40. ($400). She's invited Mom to spend most of the summer with her and Mom will probably go as soon as Goldie gets on her feet. They had a letter from Harry today their first letter since the invasion, and he was in on it. He said that he is back in England and resting and everything is fine.

I bought Harry and Goldie a scale as a gift, that I got from Mr. Bellet's place. Mr. Bellet hasn't told me the price as yet, though I think it will be around $4.50. I suppose I'll give them $5 in cash to finish off the gift. I'm waiting til I hear from you.

I was contemplating today that it will soon be a year we have been separated. I think I've changed a bit in that year. I can't say exactly how, but I feel that I've changed somewhat. I know that when you do come back, all this will be like a dream, or, rather, a nightmare. You were right when you said it would be from a year and a half to two years. It will be. Yet I feel that we've past the worse part of it. That, however, remains to be seen.

Shirley Anopolsky hasn't called about the Reese setup as yet and I'll wait til she does before bothering her further.

Betty is moving on Friday and I can't help wondering how Adele will act when she sees strange people on the porch next door. After all she practically climbs over to the other porch and it will be a radical change for her. It should prove interesting Adele sings herself to sleep at times with this: "Uh, a, uh a, baby, uh, a uh, a da-dee, uh a uh a mommy" Her sleeping is good again (I'm almost afraid to say it for fear it will change again) and I'm getting a bit of rest. Last night I hit the hay immediately after writing to you, sweet, and that was 10:30. I slept like a ton of brick all night til 6:30. I feel better today than I've felt all week and my appetite is beginning to pick up again.

Goldie had a letter from her grandfather and he is going to visit her around July 4th. Goldie has received numerous other lovely gifts for Diana, a comb and brush set, another robe and slippers, $3 in cash from her landlady in Washington, a blanket, etc.

I had a v-mail from Milt and he thinks it's just possible that he'll be able to see our Jack. Did I tell you that our Jack met up with a fellow he used to play ball with (I think his name is Greenberg) and who is stationed right near him?

I owe so many letters that I just get tired thinking about it. I received two letters from Seymour and have yet to reply. I'll be sure to get one off this week sometime.

There isn't much else to say, honey, except what I'd like most to be doing to you at this moment. And rather than bore you with the details (are you kiddin'!) I’ll sign off after leaving you soundly hugged and kissed.
Your Eve
P. S. Maxie Brown is in England, too.

Your V-mail of 12 June just arrived, two days after I received your letter of the 16th and your V-mail of the 17th. However, I did learn something new from it. Three things in fact: (1) Tony's 13-day furlough (2) About the snaps of Adele with Richy (do I get to see them?) (3) That Mom received my letter. This is the one you wrote while sitting in Betty's rocking-chair in the driveway. From the uniformity of the writing, I would say that that's a pretty good pen you just acquired. I can't tell you how glad I am, Sweet, that you find your work no undue hardship. Why don't you tell me more about it? I'd like to know, for instance, what your work consists of, what the office looks like, what files you have and what your routine is. You forgot, incidentally, to tell me what you wore to work on the 16th and 17th.
Wasn’t so busy today after all. As I told you yesterday, I intended to start on the Company History today. However, because this involves going out to the Tech site, where our shops are located, and because it was either raining, or threatening to, all day, I decided to let it ride until tomorrow

Soon as to finish this, I’m going to change into my "class A's", and ride down to the Aero club to watch the jitter-bugs do their stuff at the regular Wednesday night dance. Wish I could take you with me, Chippie, so I wouldn’t just have to sit around and watch, Somehow, I never had any desire to dance with any of the gals I've ever seen there. There's another reason for my reluctance to do so, which I won't set down here. However, that won't lessen my enjoyment in the watching. Guess I'm just unselfish enough to enjoy watching the others having a good time. If I remember, I’ll tell you more about it tomorrow.
That's about all I can think of to write for now, Baby, so you'll have to excuse me this time. Au revoir, my darling. My fondest remembrances to Miss Adele Bara Strongin. (Don't think me silly for writing the name out. I can't explain why the sight and sound of the thrills me so, but it does.) My love and kindest regards to the family, and our friends, respectively. I adore you, Mrs. Strongin (I like that, too.)

It was really wonderful hearing from you. As you can see by the address my folks and I are vacationing out here in Brighton. I see a great deal of Hal and his wife Frances. Do you know her? and ? Chase. ? I haven’t heard from you in so long. I have received your letter as it was forwarded to me from the Browns. I can’t understand why Jack doesn’t get in touch with you. We haven’t heard from him in five weeks and to-day we received a letter dated June 12th. He said a cousin of ours got there by the name of Ben ? not ? son but he’s another cousin by that name. Jack and he are very good friends and was he excited. I get mail from Carl every day and he’s fine and can’t wait for Victory. That goes for you and everybody else. Max Chase was up in Phila. and he says everything is fine out there. Evelyn looks very well and don’t you worry about her candy. I hear your daughter is the spittin’ image of you. You should be a proud Daddy. We expect George in on leave this week ? My Ma and Pa send their best to you and can’t wait to see you back on good old U.S.A. soil in a secure ? I’ll have to say so long for now.