Post #403 - June 29, 1944 No Matter How Much I May Kid You About Having Another Child, I Mean It in the Very, Very Distant Future and Bobruisk and Borisov Were the Hometowns of My Father and Mother 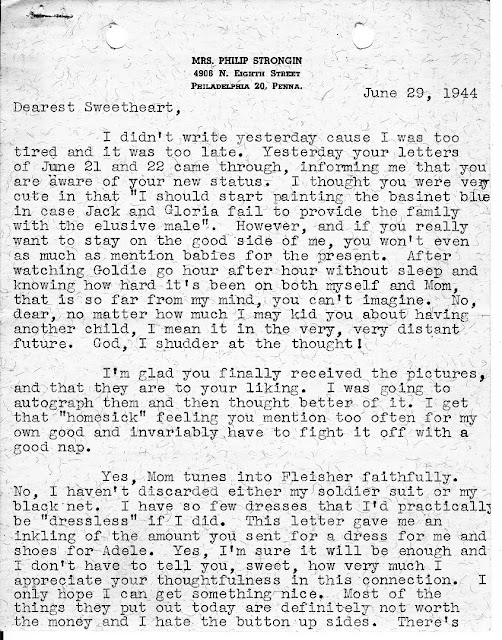 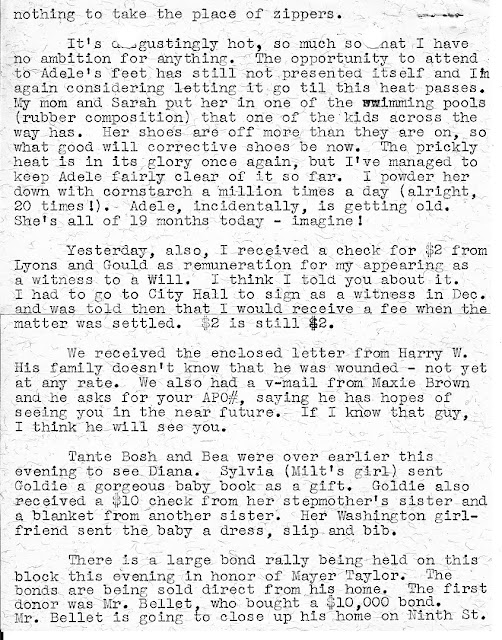 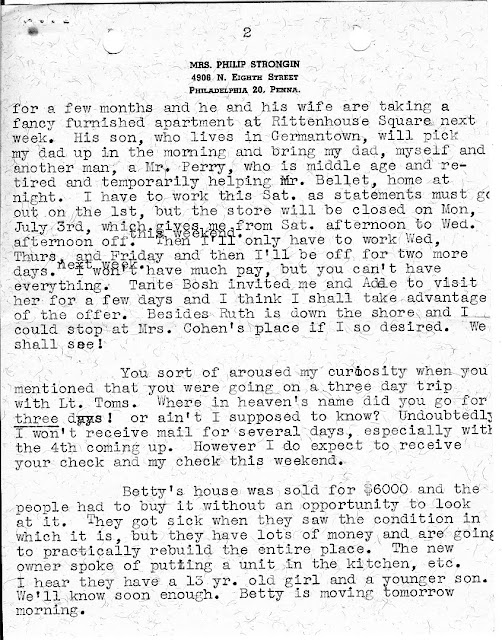 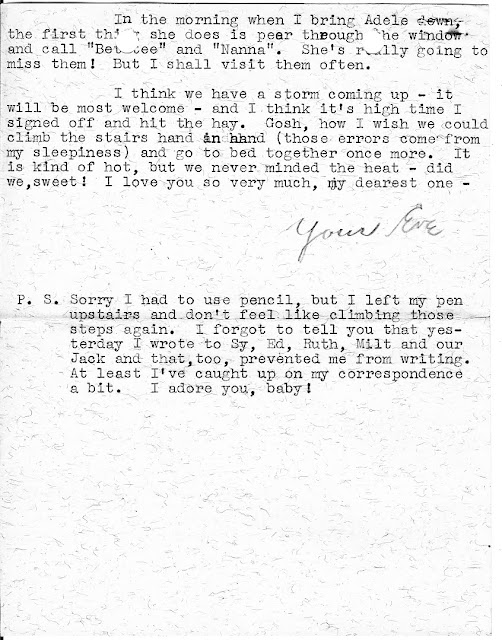 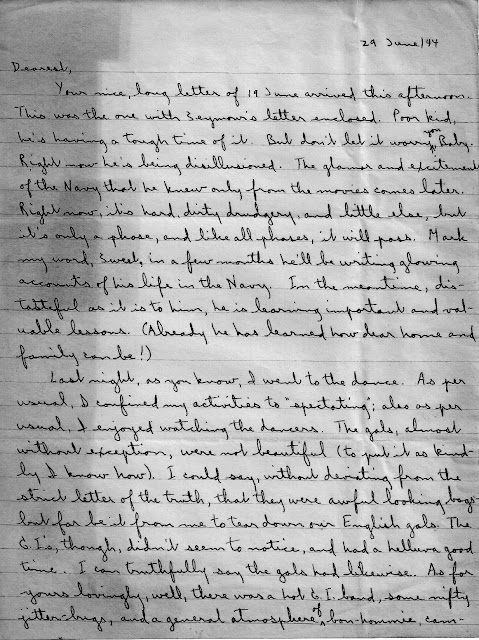 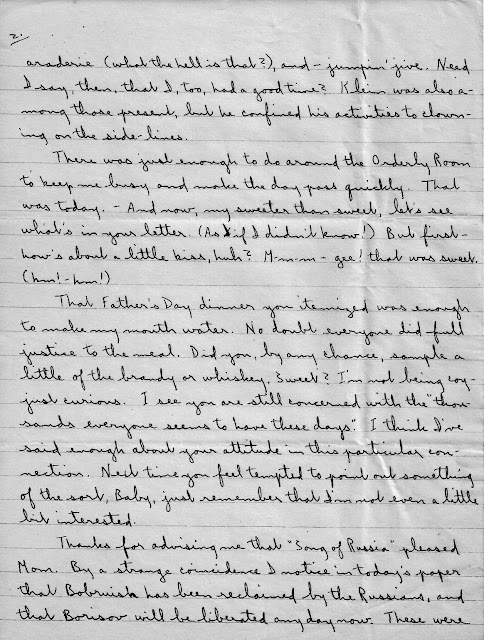 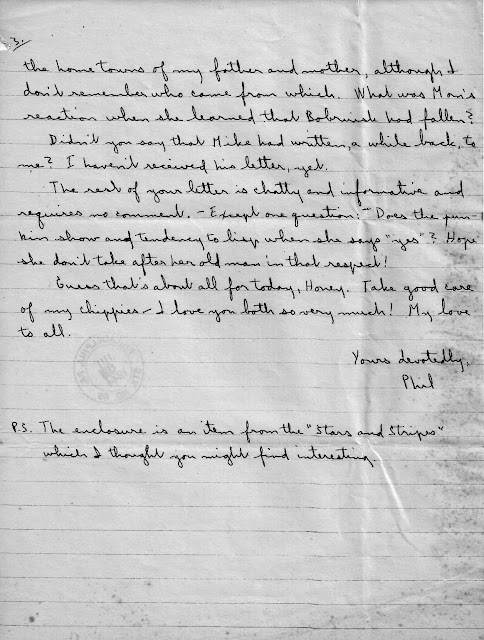 I didn't write yesterday cause I was too tired and it was too late. Yesterday your letters of June 21 and 22 came through, informing me that you are aware of your new status. I thought you were very cute in that "I should start painting the basinet blue in case Jack and Gloria fail to provide the family with the elusive male". However, and if you really want to stay on the good side of me, you won't even as much as mention babies for the present. After watching Goldie go hour after hour without sleep and knowing how hard it's been on both myself and Mom, that is so far from my mind, you can't imagine. No, dear, no matter how much I may kid you about having another child, I mean it in the very, very distant future. God, I shudder at the thought!

I'm glad you finally received the pictures, and that they are to your liking. I was going to autograph them and then thought better of it. I get that "homesick" feeling you mention too often for my own good and invariably have to fight it off with a good nap.

Yes, Mom tunes into Fleisher faithfully. No, I haven't discarded either my soldier suit or my black net. I have so few dresses that I'd practically be "dressless" if I did. This letter gave me an inkling of the amount you sent for a dress for me and shoes for Adele. Yes, I'm sure it will be enough and I don't have to tell you, sweet, how very much I appreciate your thoughtfulness in this connection. I only hope I can get something nice. Most of the things they put out today are definitely not worth the money and I hate the button up sides. There's nothing to take the place of zippers.

It's disgustingly hot, so much so that I have no ambition for anything. The opportunity to attend to Adele's feet has still not presented itself and I am again considering letting it go til this heat passes. My mom and Sarah put her in one of the swimming pools (rubber composition) that one of the kids across the way has. Her shoes are off more than they are on, so what good will corrective shoes be now. The prickly heat is in its glory once again, but I've managed to keep Adele fairly clear of it so far. I powder her down with cornstarch a million times a day (alright, 20 times!). Adele, incidentally, is getting old. She's all of 19 months today - imagine!

Yesterday, also, I received a check for $2 from Lyons and Gould as remuneration for my appearing as a witness to a Will. I think I told you about it. I had to go to City Hall to sign as a witness in Dec. and was told then that I would receive a fee when the matter was settled. $2 is still $2.

We received the enclosed letter from Harry W. His family doesn't know that he was wounded - not yet at any rate. We also had a v-mail from Maxie Brown and he asks for your APO#, saying he has hopes of seeing you in the near future. If I know that guy, I think he will see you.

Tante Bosh and Bea were over earlier this evening to see Diana. Sylvia (Milt's girl) sent Goldie a gorgeous baby book as a gift. Goldie also received a $10 check from her stepmother's sister and a blanket from another sister. Her Washington girl friend sent the baby a dress, slip and bib.

There is a large bond rally being held on this block this evening in honor of Mayer Taylor. The bonds are being sold direct from his home. The first donor was Mr. Bellet, who bought a $10,000 bond. Mr. Bellet is going to close up his home on Ninth St. for a few months and he and his wife are taking a fancy furnished apartment at Rittenhouse Square next week. His son, who lives in Germantown, will pick my dad up in the morning and bring my dad, myself and another man, a Mr. Perry, who is middle age and retired and temporarily helping Mr. Bellet, home at night. I have to work this Sat. as statements must go out on the 1st, but the store will be closed on Mon., July 3rd, which gives me this weekend from Sat. afternoon to Wed. afternoon off. Then I'II only have to work Wed., Thurs., and Friday and then I'll be off for two more days next week. I won’t have much pay, but you can't have everything. Tante Bosh invited me and Adele to visit her for a few days and I think I shall take advantage of the offer. Besides Ruth is down the shore and I could stop at Mrs. Cohen's place if I so desired. We shall see!

You sort of aroused my curiosity when you mentioned that you were going on a three day trip with Lt. Toms. Where in heaven's name did you go for three days! or ain't I supposed to know? Undoubtedly I won't receive mail for several days, especially with the 4th coming up. However I do expect to receive your check and my check this weekend.

Betty's house was sold for $6000 and the people had to buy it without an opportunity to look at it. They got sick when they saw the condition in which it is, but they have lots of money and are going to practically rebuild the entire place. The new owner spoke of putting a unit in the kitchen, etc. I hear they have a 13 yr. old girl and a younger son. We'll know soon enough. Betty is moving tomorrow morning.

In the morning when I bring Adele down the first thing she does is peer through the window and call "Bet-tee" and "Nanna". She's really going to miss them! But I shall visit them often.

I think we have a storm coming up - it will be most welcome - and I think it's high time I signed off and hit the hay. Gosh, how I wish we could climb the stairs hand in hand (those errors come from my sleepiness) and go to bed together once more. It is kind of hot, but we never minded the heat - did we, sweet! I love you so very much, my dearest one -
Your Eve

P. S. Sorry, I had to use pencil, but I left my pen upstairs and don't feel like climbing those steps again. I forgot to tell you that yesterday I wrote to Sy, Ed, Ruth, Milt and our Jack and that, too, prevented me from writing. At least I've caught up on my correspondence a bit. I adore you, baby!

Your nice, long letter of 19 June arrived this afternoon. This was the one with Seymour’s letter enclosed. Poor kid, he's having a tough time of it. But don't let it worry you, Baby. Right now he's being disillusioned. The glamour and excitement of the Navy that he knew only from the movies comes later. Right now, it's hard, dirty drudgery, and little else, but it's only a phase, and like all phases, it will pass. Mark my word, Sweet, in a few months he'll be writing glowing accounts of his life in the Navy. In the meantime, distasteful as it is to him, he is learning important and valuable lessons. (Already he has learned how dear home and family can be!)

Last night, as you know, I went to the dance. As per usual, I confined my activities to “spectating”; also as per usual, I enjoyed watching the dancers. The gals, almost without exception, were not beautiful (to put it as kindly as I know how). I could say, without deviating from the strict letter of the truth, that they were awful looking bags— but far be it from me to tear down our English gals. The G.I.'s, though, didn't seem to notice, and had a helluva good time. I can truthfully say the gals had likewise. As for yours lovingly, well, there was a hot G.I. band, some nifty jitter-bugs, and a general atmosphere of bon-hommie, camaraderie (what the hell is that?), and—jumpin’ jive. Need I say, then, that I, too, had a good time? Klein was also among those present, but he confined his activities to clowning on the side-lines.
There was just enough to do around the Orderly Room to keep me busy and make the day pass quickly. That was today.—And now, my sweeter than sweet, let's see what's in your letter. (As if I didn't know!) But first—how's about a little kiss, huh? M-m-m—gee! that was sweet. (hm! - hm!)
That Father's Day dinner you itemized was enough to make my mouth water. No doubt everyone did full justice to the meal. Did you, by any chance, sample a little of the brandy or whiskey, sweet? I'm not being coy, just curious. I see you are still concerned with the "thousands everyone seems to have these days". I think I've said enough about your attitude in this particular connection. Next time you feel tempted to point out something of the sort, Baby, just remember that am not even a little bit interested.
Thanks for advising me that "Song of Russia" pleased Mom. By a strange coincidence I notice in today's paper that Bobruish has been reclaimed by the Russians, and that Borison will be liberated any day now. These were the home towns of my father and mother, although I don’t remember who come from which. What was Mom's reaction when she learned that Bobruisk had fallen?
Didn't you say that Mike had written, a while back to me? I haven't received his letter yet.

The rest of your letter is chatty and informative and requires no comment. - Except one question: Does the punkin show any tendency to lisp when she says "yes"? Hope she don't take after her old man in that respect!
Guess that's about all for today, Honey. Take good care of my chippies. I love you both so very much! My love to all.

P.S. The enclosure is an item from the “Stars and Stripes" which I thought you might find interesting.
Posted by Marilyn at 3:01 PM