Post #427 - July 31, 1944 Ruth Looks Grand, Getting Better Looking All the Time and A Letter from Jack Nerenberg 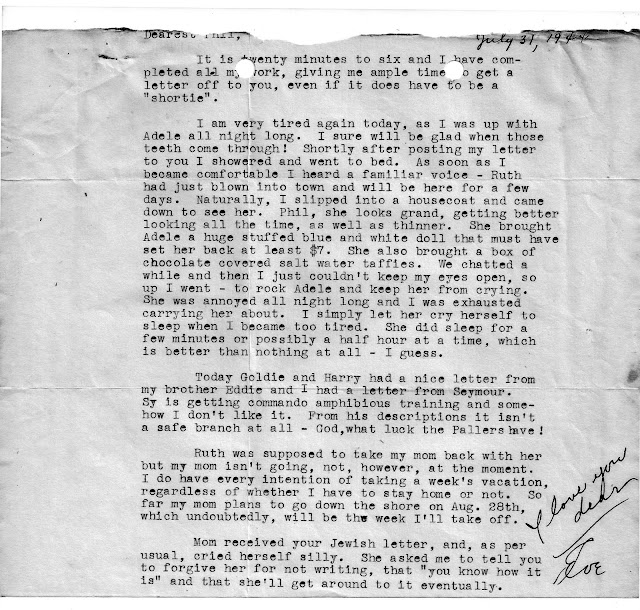 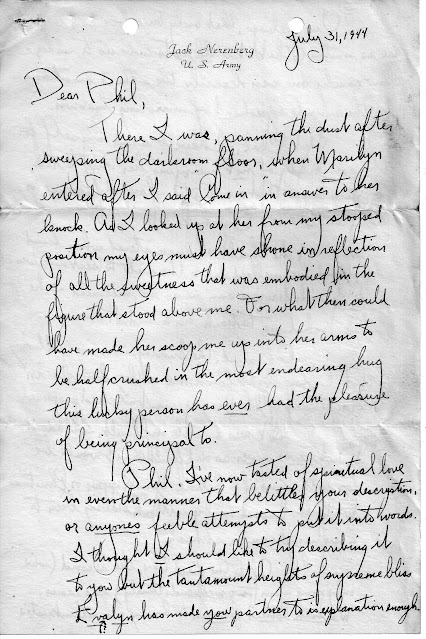 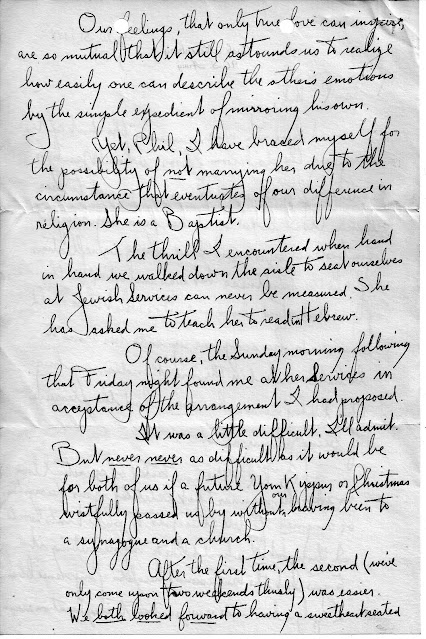 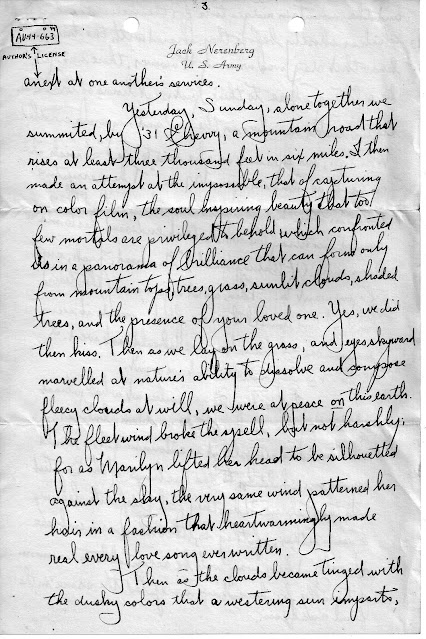 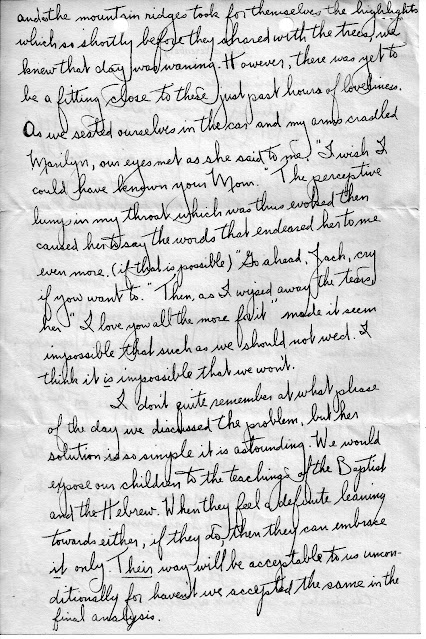 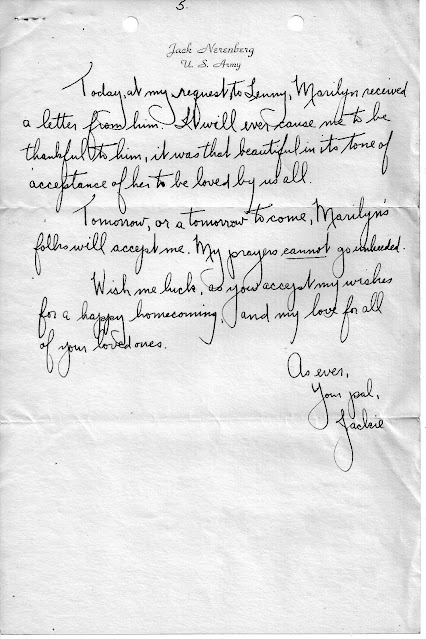 It is twenty minutes to six and I have completed all my work, giving me ample time to get a letter off to you, even if it does have to be a "shortie".

I am very tired again today, as I was up with Adele all night long. I sure will be glad when those teeth come through! Shortly after posting my letter to you I showered and went to bed. As soon as I became comfortable I heard a familiar voice - Ruth had just blown into town and will be here for a few days. Naturally, I slipped into a housecoat and came down to see her. Phil, she looks grand, getting better looking all the time, as well as thinner. She brought Adele a huge stuffed blue and white doll that must have set her back at least $7. She also brought a box of chocolate covered salt water taffies. We chatted a while and then I just couldn't keep my eyes open, so up I went - to rock Adele and keep her from crying. She was annoyed all night long and I was exhausted carrying her about. I simply let her cry herself to sleep when I became too tired. She did sleep for a few minutes or possibly a half hour at a time, which is better than nothing at all - I guess.

Today Goldie and Harry had a nice letter from my brother Eddie and I had a letter from Seymour. Sy is getting commando amphibious training and somehow I don't like it. From his descriptions it isn't a safe branch at all - God, what luck the Pallers have!

Ruth was supposed to take my mom back with her but my mom isn't going, not, however, at the moment. I do have every intention of taking a week's vacation, regardless of whether I have to stay home or not. So far my mom plans to go down the shore on Aug. 28th, which undoubtedly, will be the week I'll take off.

Mom received your Jewish letter, and, as per usual, cried herself silly. She asked me to tell you to forgive her for not writing, that "you know how it is" and that she'll get around to it eventually.

I love you dear.


July 31, 1944
Dear Phil,
There I was panning the dust after sweeping the darkroom floor, when Marilyn entered after I said, “Come in” in answer to her knock. As I looked up at her from my stooped position, my eyes must have shown in reflection of all the sweetness that was embodied in the figure that stood above me. For what then, could have made her scoop me up into her arms to be half crushed in the most endearing hug this lucky person has ever had the pleasure of being principle to.
Phil, I've now tasted of spiritual love in even the manner that belittles your description or anyone's feeble attempts to put it into words. I thought I should like to try describing it to you, but the tantamount heights of supreme bliss Evelyn has made you partner to is explanation enough.
Our feelings, that only true love can inspire, are so mutual, that it still astounds us to realize how easily one can describe the others emotions by the simple expedient of mirroring his own. Yet Phil, I have braced myself for the possibility of not marrying her due to the circumstance that eventuates of our difference in religion. She is a Baptist.
The thrill encountered when hand in hand we walked down the aisle to seat ourselves at Jewish services can never be measured. She has asked me to teach her to read in Hebrew.
Of course, the Sunday morning following that Friday night found me at her Services in acceptance of the arrangement I had proposed. It was a little difficult, I’ll admit. But never never as difficult as it would be for both of us in a future Yom Kippur or Christmas wistfully passed by without our having been to a synagogue and a church.
After the first time, the second (we’ve only come upon two weekends thusly) was easier. We both looked forward to having a sweetheart seated anext at one another’s services.
Yesterday, Sunday, alone together we summited by ’31 Chevy, a mountain road that rises at least three thousand feet in six miles. I then made an attempt at the impossible, that of capturing on color film, the soul inspiring beauty that too few mortals are privileged to behold, which confronted us in a panorama of brilliance that can form only from mountaintops, trees, grass, sunlit clouds, shaded trees, and the presence of your loved one. Yes, we did then kiss. Then as we lay on the grass, and eyes skyward marveled at nature's ability to dissolve and compose fleecy clouds at will, we were at peace on this earth. The fleet wind broke the spell, but not harshly, for as Marilyn lifted her head to be silhouetted against the sky, the very same wind patterned her hair in a fashion that heartwarmingly made real every love song ever written.
Then as the clouds became tinged with the dusky colors that a westering sun imparts, and the mountain ridges took for themselves the highlights which so shortly before they shared with the trees, we knew that day was waning. However, there was yet to be a fitting close to these just past hours of loveliness. As we seated ourselves in the car and my arms cradled Marilyn, our eyes met and she said to me, “I wish I could have known your Mom.” The perceptive lump in my throat which was evoked then caused her to say the words that endeared her to me even more, (if that is possible.) “Go ahead, Jack, cry if you want to.” Then, as I wiped away the tears, her “I love you all the more for it” made it seem impossible that such as we should not wed. I think it is impossible that we won't.
I don't quite remember at what phase of the day we discussed the problem, but her solution is so simple it is astounding. We would expose our children to the teachings of the Baptist and the Hebrew. When they feel a definite leaning towards either, if they do, then they can embrace it only. Their way will be acceptable to us unconditionally for haven’t we accepted the same in the final analysis.
Today, at my request to Lenny, Marilyn received a letter from him. It will ever cause me to be thankful to him, it was that beautiful in its tone of acceptance of her to be loved by us all.
Tomorrow, or tomorrow to come, Marilyn's folks will accept me. My prayers cannot go unheeded.
Wish me luck, as you accept my wishes for a happy homecoming and my love for all of your loved ones.
As ever,
Your pal,
Jackie
Posted by Marilyn at 9:07 AM