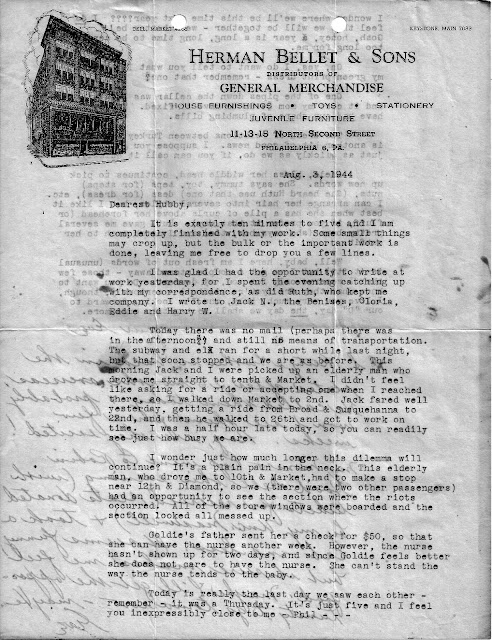 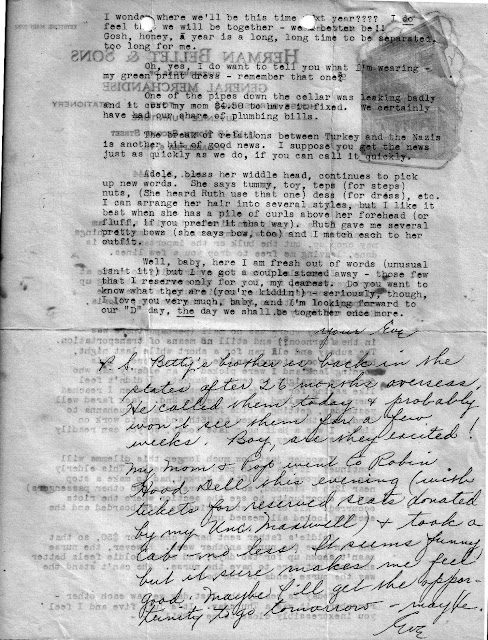 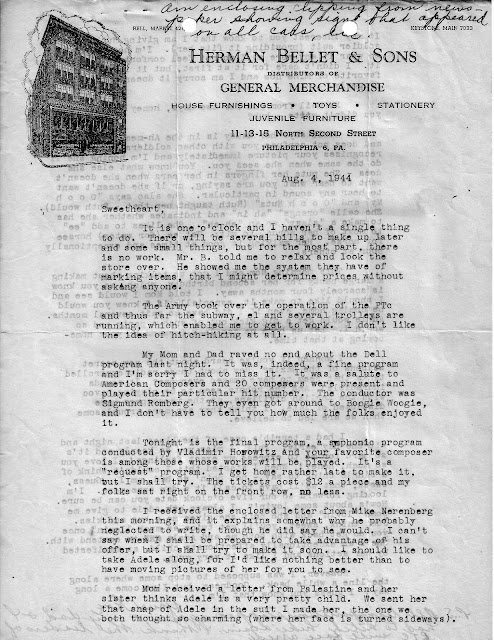 It is exactly ten minutes to five and I am completely finished with my work. Some small things may crop up, but the bulk of the important work is done, leaving me free to drop you a few lines.

I was glad I had the opportunity to write at work yesterday, for I spent the evening catching up with my correspondence, as did Ruth, who kept me company. I wrote to Jack N., the Benises, Gloria, Eddie and Harry W.

Today there was no mail (perhaps there was in the afternoon?) and still no means of transportation. The subway and el ran for a short while last night, but that soon stopped and we are as before. This morning Jack and I were picked up by an elderly man who drove me straight to Tenth & Market. I didn't feel like asking for a ride or accepting one when I reached there, so I walked down Market to 2nd. Jack fared well yesterday, getting a ride from Broad & Susquehanna to 22nd, and then he walked to 26th and got to work on time. I was a half hour late today, so you can readily see just how busy we are.

I wonder just how much longer this dilemma will continue? It's a plain pain in the neck. This elderly man, who drove me to 10th & Market, had to make a stop near 12th & Diamond, so we (there were two other passengers) had an opportunity to see the section where the riots occurred. All of the store windows were boarded and the section looked all messed up.

Goldie's father sent her a check for $50, so that she can have the nurse another week. However, the nurse hasn't shown up for two days, and since Goldie feels better she does not care to have the nurse. She can't stand the way the nurse tends to the baby.

Today is really the last day we saw each other - remember - it was a Thursday. It's just five and I feel you inexpressibly close to me - Phil - - -

I wonder where we'll be this time next year???? I do feel that we will be together - we better be!! Gosh, honey, a year is a long, long time to be separated, too long for me.

Oh, yes, I do want to tell you what I'm wearing - my green print dress - remember that one?

One of the pipes down the cellar was leaking badly and it cost my mom $4.50 to have it fixed. We certainly have had our share of plumbing bills.

The break of relations between Turkey and the Nazis is another bit of good news. I suppose you get the news just as quickly as we do, if you can call it quickly.

Adele, bless her widdle head, continues to pick up new words. She says tummy, toy, teps (for steps) nuts, (She heard Ruth use that one) dess (for dress), etc. I can arrange her hair into several styles, but I like it best when she has a pile of curls above her forehead (or fluff, if you prefer it that way). Ruth gave me several pretty bows (she says bow, too) and I match each to her outfit.

Well, baby, here I am fresh out of words (unusual isn't it?) but I've got a couple stored away - those few that I reserve only for you, my dearest. Do you want to know what they are (you're kiddin') - seriously, though, I love you very much, baby, and I'm looking forward to our "D" day, the day we shall be together once more.

P. S. Betty's brother is back in the states after 26 months overseas. He called them today & probably won’t see them for a few weeks, Boy, are they excited!
My Mom & Pop went to Robin Hood Dell this evening (with tickets for reserved seats donated by my Unc. Maxwell) & took a cab - no less. It seems funny but it sure makes me feel good. Maybe I’ll get the opportunity to go tomorrow - maybe.
Eve

It is one o'clock and I haven't a single thing to do. There will be several bills to make up later and some small things, but for the most part, there is no work. Mr. B. told me to relax and look the store over. He showed me the system they have of marking items, that I might determine prices without asking anyone.
The Army took over the operation of the PTC and thus far the subway, el and several trolleys are running, which enabled me to get to work. I don't like the idea of hitch-hiking at all.

My Mom and Dad raved no end about the Dell program last night. It was, indeed, a fine program and I'm sorry I had to miss it. It was a salute to American Composers and 20 composers were present and played their particular hit number. The conductor was Sigmund Romberg. They even got around to Boogie Woogie, and I don't have to tell you how much the folks enjoyed it.

Tonight is the final program, a symphonic program conducted by Vladimir Horowitz and your favorite composer is among those whose works will be played. It's a “request" program. I get home rather late to make it, but I shall try. The tickets cost $12 a piece and my folks sat right on the front row, no less.

I received the enclosed letter from Mike Nerenberg this morning, and it explains somewhat why he probably neglected to write, though he did say he would. I can't say when I shall be prepared to take advantage of his offer, but I shall try to make it soon. I should like to take Adele along, for I'd like nothing better than to have moving pictures of her for you to see.

Mom received a letter from Palestine and her sister thinks Adele is a very pretty child. We sent her that snap of Adele in the suit I made her, the one we both thought so charming (where her face is turned sideways).

It may interest you to know that I am giving Ruth my soldier suit (providing it fits her). I'm not going to wear it any more as I do not feel comfortable in it. I didn't care for it at first, but it is a favorite of mine now and I am sorry it doesn't fit properly.
No mail from you for two days, honey - guess you didn't write - huh?

Adele says her daddy is in the Ah-mee (Ah me!) and does not confuse you with other soldiers. She recognizes your picture immediately and I'm hoping she'll do the same when she sees you. You know what else she does - She puts her fingers in her ears when she doesn't want to hear what you are saying, or if she doesn't want to hear any sound in particular. She also says "O o o h My" and "O o o h Nuts" (Ruth taught her that - Ruth would). She calls "orange" "ah in" and indicates whether she has to make a "sissy" or an "eh-eh". She likes to add "ee" to most of her words, to wit: Wat ee (for water) horsee for horse. Her walking is good at times and exceptionally poor at others.

This morning Mom and I got to talking about making a large party for her second birthday, which, as you know is scarcely four months away. I told Mom I would see and I should like to make it, especially if I knew you would be coming home, even if I did have to wait several months. Adele would get a big.kick out of such a party and so would I. Let us hope we can look forward to your homecoming at that time.

I wonder if you've heard about the new secret weapons of the Nazis? How about those radio controlled tanks that seem to have amazed everyone? It sounds incredible! And the robots seem to be playing havoc with the English civilians, as the newspapers have disclosed of late. I think they are more troublesome than we are led to believe.

I had a terrible case of the blues last night and hit the hay early. Phil, I miss you so keenly and it's so hard for me to express my exact feelings! I love you so much, honey! When I started this I couldn't think of a single thing to say - not doin' so bad, am I. Guess, sweet, that we'll have to call it a day once more, I'm looking forward to our five o'clock date you can be sure. How's about some lovin'? I always ask Adele to give me some "lovin" and sho nuff she gives me a hug and kiss. Just think, sweet, you'll get twice as much "lovin'”once you do get back with both me and Adele to contend with. She's an exceptionally affectionate child, as manifested by her actions and I like it very much.

However, I was supposed to stop somewhere along the line a while back. Goodness, but I've come a long way! I guess you know that I'm
Your Eve

P.S. all transportation stopped again and my dad and I had to hitch hike again. I think the leaders of PTC will face arrest.
Am enclosing clipping from newspaper showing sign that appeared on all cars, Eve.
Posted by Marilyn at 8:46 AM