Post #451 - September 8, 1944 Lots of Children are Not Going to Go Back to School Until There is a Definite Decline in Cases and It Pleased Me Mightily that Everyone Goes Out of His Way to Stop In and See You 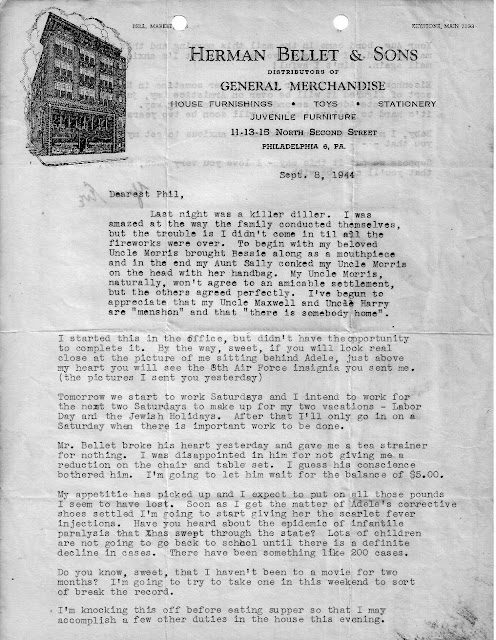 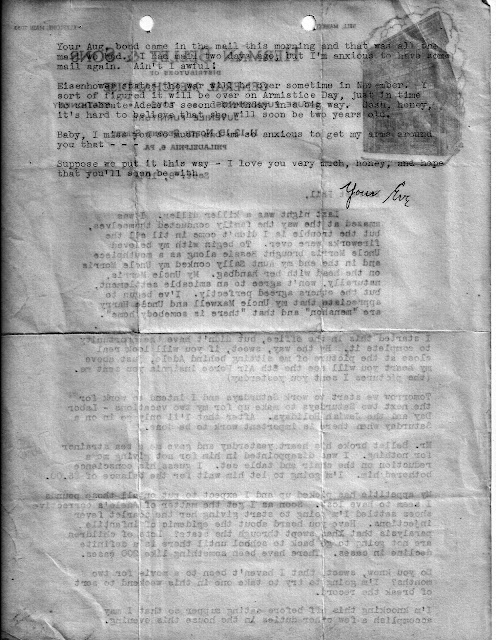 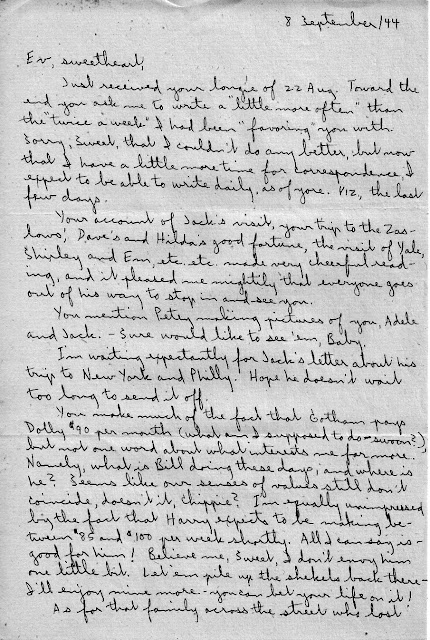 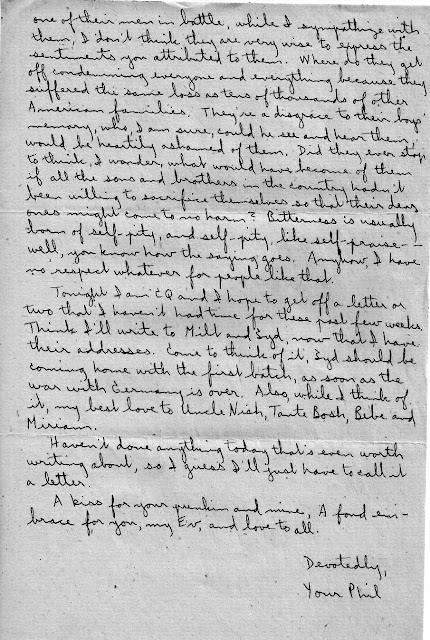 Last night was a killer diller. I was amazed at the way the family conducted themselves, but the trouble is I didn't come in til all the fireworks were over. To begin with my beloved Uncle Morris brought Bessie along as a mouthpiece and in the end my Aunt Sally conked my Uncle Morris on the head with her handbag. My Uncle Morris, naturally, won't agree to an amicable settlement, but the others agreed perfectly. I've begun to appreciate that my Uncle Maxwell and Uncle Harry are "menshon" and that "there is somebody home".

I started this in the office, but didn't have the opportunity to complete it. By the way, sweet, if you will look real close at the picture of me sitting behind Adele, just above my heart you will see the 8th Air Force insignia you sent me. (the pictures I sent you yesterday)

Tomorrow we start to work Saturdays and I intend to work for the next two Saturdays to make up for my two vacations - Labor Day and the Jewish Holidays. After that I'll only go in on a Saturday when there is important work to be done.

Mr. Bellet broke his heart yesterday and gave me a tea strainer for nothing. I was disappointed in him for not giving me a reduction on the chair and table set. I guess his conscience bothered him. I’m going to let him wait for the balance of $5.00.

My appetite has picked up and I expect to put on all those pounds I seem to have lost. Soon as I get the matter of Adele's corrective shoes settled I'm going to start giving her the scarlet fever injections. Have you heard about the epidemic of infantile paralysis that has swept through the state? Lots of children are not going to go back to school until there is a definite decline in cases. There have been something like 200 cases.

Do you know, Sweet, that I haven't been to a movie for two months? I’m going to try to take one in this weekend to sort of break the record.

I’m knocking this off before eating supper so that I may accomplish a few other duties in the house this evening.

Your Aug. bond came in the mail this morning and that was all the mail we had. I had mail two days ago, but I'm anxious to have some mail again. Ain't I awful!

Eisenhower states the war will be over sometime in November. I sort of figured it will be over on Armistice Day, just in time to celebrate Adele's second birthday in a big way. Gosh, honey, it's hard to believe that she will soon be two years old.

Baby, I miss you so much and am so anxious to get my arms around you that - - -

Suppose we put it this way - I love you very much, honey, and hope that you'll soon be with

Just received your longie of 22 Aug. Toward the end you ask me to write a little more often than the “twice a week" I had been "favoring” you with. Sorry, Sweet, that I couldn’t do any better, but now that I have a little more time for correspondence, I expect to be able to write daily, as of yore. Viz., the last few days.

Your account of Jack's visit, your trips to the Zaslows, Dave's and Hilda's good fortune, the visit of Yale, Shirley and Em, etc. etc. made very cheerful reading, and it pleased me mightily that everyone goes out of his way to stop in and see you.

You mention Petey making pictures of you, Adele and Jack. - Sure would like to see 'em, Baby.

I'm waiting expectantly for Jack's letter about his trip to New York and Philly. Hope he doesn't wait too long to send it off.
You make much of the fact that Gotham pays Dolly $90 per month (what am I supposed to do—swoon?) but not one word about what interests me far more. Namely, what is Bill doing these days and where is he? Seems like our senses of values still don't coincide, doesn't it, Chippie? I'm equally unimpressed by the fact that Harry expects to be making between $85 and $100 per week shortly. All I can say is - good for him! Believe me, Sweet, I don't envy him one little bit. Let them pile up the shekels back there - I’ll enjoy mine more - you can bet your life on it!

As for that family across the street who lost one of their men in battle, while I sympathize with them, I don't think they are very wise to express the sentiments you attributed to them. Where do they get off condemning everyone and everything because they suffered the same loss as tens of thousands of other American families. They're a disgrace to their boy’s memory, who, I’m sure could he see and hear them, would be heartily ashamed of them. Did they ever stop to think, I wonder, what would have become of them if all the sons and brothers in the country hadn't been willing to sacrifice themselves so that their dear ones might come to no harm? Bitterness is usually born of self-pity, and self-pity, like self-praise - well, you know how the saying goes. Anyhow, I have no respect whatever for people like that.

Tonight I am CQ and I hope to get off a letter or two that I haven’t had time for these past few weeks. Think I’ll write to Milt and Syd, now that I have their addresses. Come to think of it, Syd should be coming home with the first batch, as soon as the war with Germany is over. Also while I think of it, my best love to Uncle Nish, Tante Bosh, Bebe and Miriam.

Haven't done anything today that's even worth writing about, so I guess I’ll just have to call it a letter.

A kiss for your punkin and mine, A fond embrace for you, my Ev, and love to all.

Devotedly,
Your Phil
Posted by Marilyn at 11:46 AM