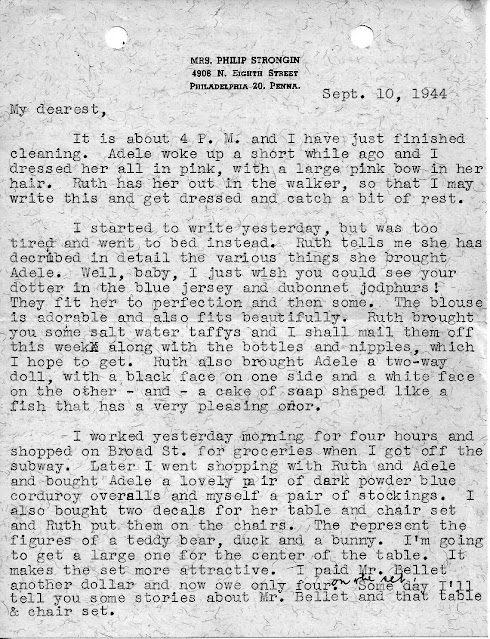 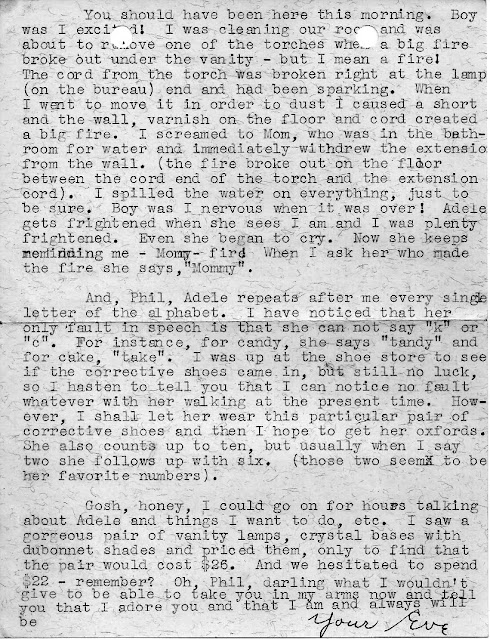 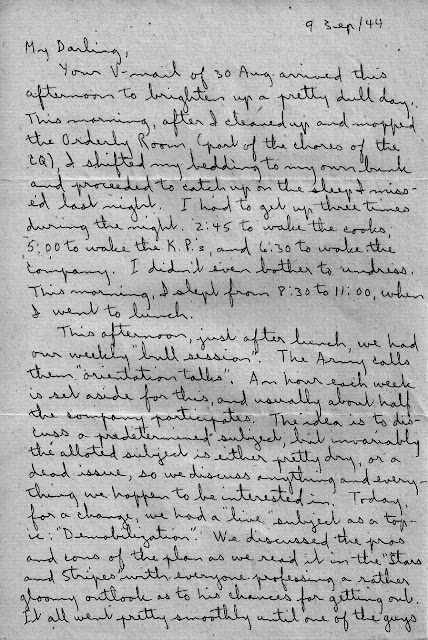 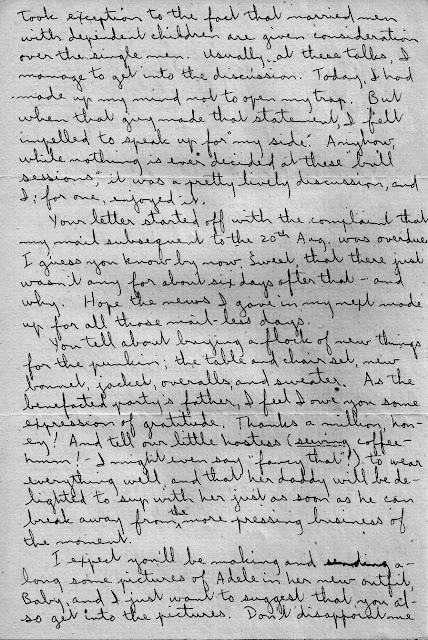 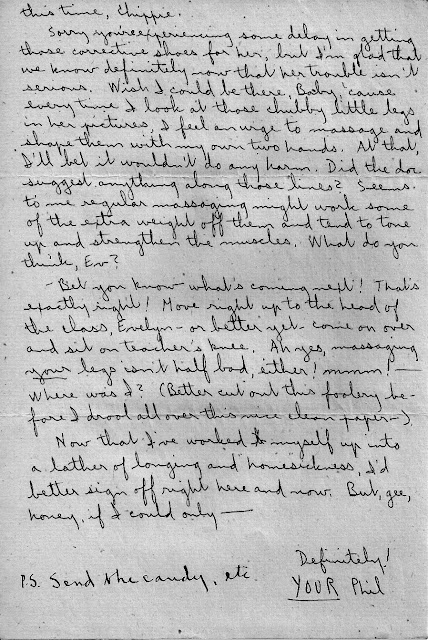 It is about 4 P. M. and I have just finished cleaning. Adele woke up a short while ago and I dressed her all in pink, with a large pink bow in her hair. Ruth has her out in the walker, so that I may write this and get dressed and catch a bit of rest.

I started to write yesterday, but was too tired and went to bed instead. Ruth tells me she has described in detail the various things she brought Adele. Well, baby, I just wish you could see your dotter in the blue jersey and dubonnet jodhpurs! They fit her to perfection and then some. The blouse is adorable and also fits beautifully. Ruth brought you some salt water taffys and I shall mail them off this week along with the bottles and nipples, which I hope to get. Ruth also brought Adele a two-way doll, with a black face on one side and a white face on the other - and - a cake of soap shaped like a fish that has a very pleasing odor.)

I worked yesterday morning for four hours and shopped on Broad St. for groceries when I got off the subway. Later I went shopping with Ruth and Adele and bought Adele a lovely pair of dark powder blue corduroy overalls and myself a pair of stockings, I also bought two decals for her table and chair set and Ruth put them on the chairs. They represent the figures of a teddy bear, duck and a bunny. I'm going to get a large one for the center of the table. It makes the set more attractive. I paid Mr. Bellet another dollar and now owe only four on the set. Someday I'll tell you some stories about Mr. Bellet and that table & chair set.

You should have been here this morning. Boy was I excited! I was cleaning our room and was about to remove one of the torches when a big fire broke out under the vanity - but I mean a fire! The cord from the torch was broken right at the lamp (on the bureau) end and had been sparking. When I went to move it in order to dust I caused a short and the wall, varnish on the floor and cord created a big fire. I screamed to Mom, who was in the bathroom for water and immediately withdrew the extension from the wall (the fire broke out on the floor between the cord end of the torch and the extension cord). I spilled the water on everything, just to be sure. Boy was I nervous when it was over! Adele gets frightened when she sees I am and I was plenty frightened. Even she began to cry. Now she keeps mentioning me - Momrny - fire! When I ask her who made the fire she says, "Mommy".

And, Phil, Adele repeats after me every single letter of the alphabet. I have noticed that her only fauIt in speech is that she can not say "k" or “c". For instance, for candy, she says "tandy" and for cake, "take". I was up at the shoe store to see if the corrective shoes came in, but still no luck, So I hasten to tell you that I can notice no fault whatever with her walking at the present time. However, I shall let her wear this particular pair of corrective shoes and then I hope to get her oxfords. She also counts up to ten, but usually when I say two she follows up with six (those two seem to be her favorite numbers).

Gosh, honey, I could go on for hours talking about Adele and things I want to do, etc. I saw a gorgeous pair of vanity lamps, crystal bases with dubonnet shades and priced them, only to find that the pair would cost $26. And we hesitated to spend $22 - remember? Oh, Phil, darling what I wouldn't give to be able to take you in my arms now and tell you that I adore you and that I am and always will be

9 Sep. 1944 My
Darling,
Your V-mail of 30 Aug. arrived this afternoon to brighten up a pretty dull day! This morning, after I cleared up and mopped the Orderly Room, (part of the chores of the CQ), I shifted my bedding to my own bunk and proceeded to catch up on the sleep I missed last night. I had to get up three times during the night. 2:45 to wake the cooks, 5:00 to wake the K.P.'s, and 6:30 to wake the company. I didn’t even bother to undress. This morning I slept from 8:30 to 11:00, when I went to lunch.

This afternoon, just after lunch, we had our weekly "bull session.” The Army calls them “orientation talks". An hour each week is set aside for this, and usually about half the company participates. The idea is to discuss a predetermined subject, but invariably the allotted subject is either pretty dry, or a dead issue, so we discuss anything and everything we happen to be interested in. Today, for a change, we had a "live" subject as a topic: "Demobilization. We discussed the pros and cons of the plan as we read it in the Stars and Stripes, with everyone professing a rather gloomy outlook as to his chances for getting out. It all went pretty smoothly until one of the guys took exception to the fact that married men with dependent children are given consideration over the single men. Usually, at these talks, I manage to get into the discussion. Today, I had made up my mind not to open my trap. But when that guy made that statement, I felt impelled to speak up for my side. Anyhow, while nothing is ever decided at these bull sessions, it was a pretty lively discussion, and I, for one, enjoyed it.
Your letter started off with the complaint that my mail subsequent to the 20th Aug, was overdue. I guess you know by now, Sweet, that there just wasn’t any for about six days after that - and why. Hope the news I gave in my next made up for all those mail-less days.

You tell about buying a flock of new things for the punkin; the table and chair set, new bonnet, jacket, overalls, and sweater. As the benefacted party's father, I feel I owe you some expression of gratitude. Thanks a million, honey! And tell our little hostess (serving coffee hmm!—I might even say "fancy that"!) to wear everything well, and that her daddy will be delighted to sup with her just as soon as he can break away from the more pressing business of the moment.

I expect you'll be making and sending along some pictures of Adele in her new outfit, Baby, and I just want to suggest that you so get into the pictures. Don’t disappoint me this time, Chippie.

Sorry you're experiencing some delay in getting those corrective shoes for her, but I'm glad that we know definitely now that her trouble isn’t serious. Wish I could be there, Baby, ’cause every time I look at those chubby little legs in her pictures, I feel an urge to massage and shape them with my own two hands. I'll bet it wouldn't do any harm. Did the doc suggest anything along those lines? Seems to me regular massaging might work some of the extra weight off them and tend to tone up and strengthen the muscles. What do you think, Ev?
Bet you know what's coming next! That's exactly right! Move right up to the head of the class, Evelyn—or better yet, come on over and sit on teacher's knee. Ah yes, massage your legs isn't half bad, either! mmm! where was I? (Better cut out this foolery before I drool all over this nice clean paper.

Now that I've worked myself up into a lather of longing and homesickness, I’d better sign off right here and now. But, gee honey, if I could only—

Definitely!
YOUR Phil
P.S. Send the candy, etc.
Posted by Marilyn at 12:56 PM