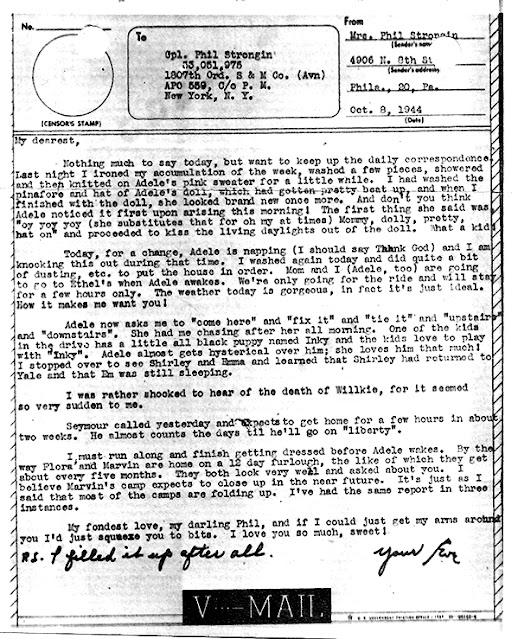 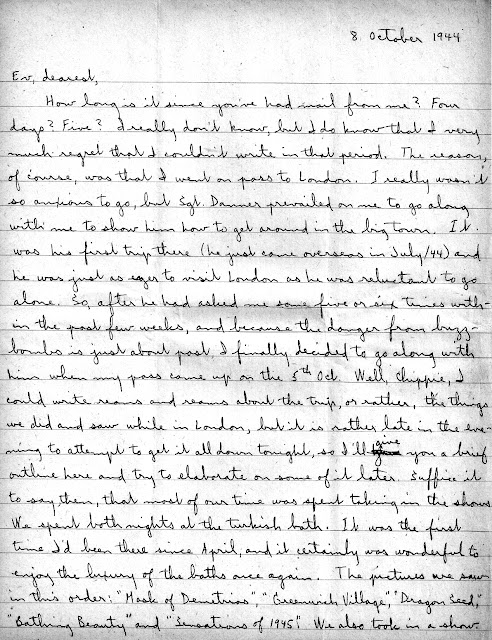 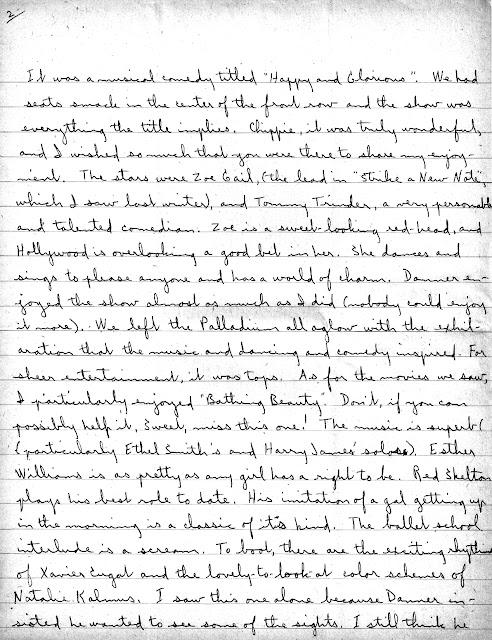 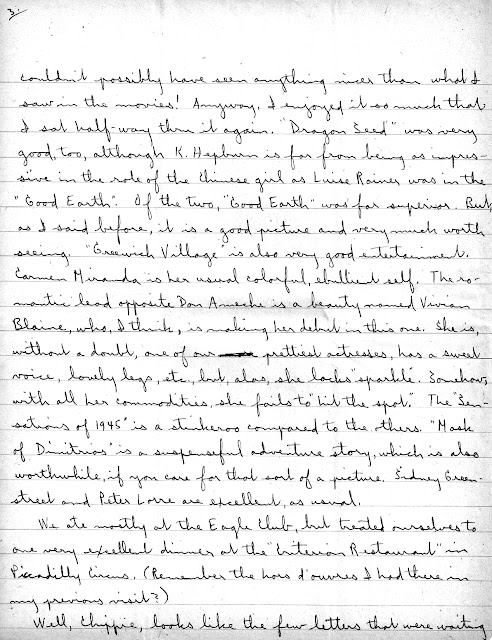 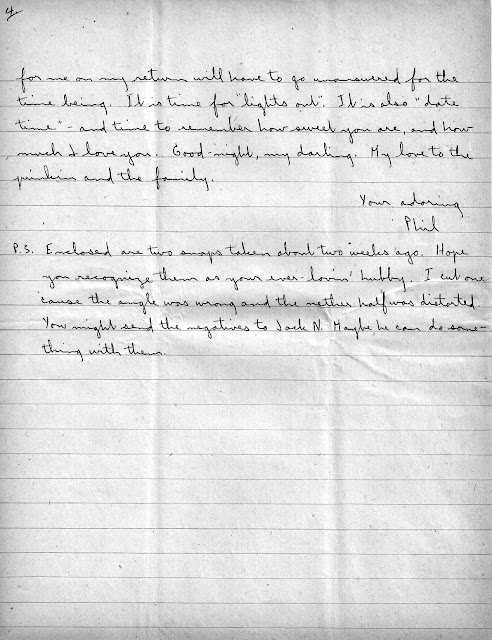 Nothing much to say today, but want to keep up the daily correspondence. Last night I ironed my accumulation of the week, washed a few pieces, showered and then knitted on Adele's pink sweater for a little while. I had washed the pinafore and hat of Adele’s doll, which had gotten pretty beat up, and when I finished with the doll, she looked brand new once more. And don't you think Adele noticed it first upon arising this morning! The first thing she said was "oy yoy yoy (she substitutes that for oh my at times) Mommy, dolly, pretty, hat on" and proceeded to kiss the living daylights out of the doll. What a kid!

Today, for a change, Adele is napping (I should say Thank God) and I am knocking this out during that time. I washed again today and did quite a bit of dusting, etc. to put the house in order. Mom and I (Adele, too) are going to go to Ethel's when Adele awakes. We're only going for the ride and will stay for a few hours only. The weather today is gorgeous, in fact it's just ideal. How It makes me want you!

Adele now asks me to “come here" and "fix It" and "tie it" and "upstairs” and "downstairs". She had me chasing after her all morning. One of the kids in the drive has a little all black puppy named Inky and the kids love to play with “Inky". Adele almost gets hysterical over him; she loves him that much! I stopped over to see Shirley and Emma and learned that Shirley had returned to Yale and that Em was still sleeping.

I was rather shocked to hear of the death or Willkie, for it seemed so very sudden to me.

Seymour called yesterday and expects to get home for a few hours in about two weeks. He almost counts the days til he'll go on "liberty".

I must run along and finish getting dressed before Adele wakes. By the way Flora and Marvin are home on a 12 day furlough, the like of which they get about every five months. They both look very well and asked about you. I believe Marvin's camp expects to close up in the near future. It's just as I said that most of the camps are folding up. I've had the same report in three instances.

My fondest love, my darling Phil, and if I could just get my arms around you I’d just squeeze you to bits. I love you so much, sweet!
Your Eve

How long is it since you've had mail from me? Four days? Five? I really don't know, but I do know that I very much regret that I couldn't write in that period. The reason, of course, was that I went on pass to London. I really wasn't so anxious to go, but Sgt. Danner prevailed on me to go along “with me” to show him how to get around in the big town. It was his first trip there (he just came overseas in July/44) and he was just as eager to visit London as he was reluctant to go alone. So, after he had asked me some five or six times within the past few weeks, and because the danger from buzz bombs is just about past, I finally decided to go along with him when my pass came up on the 5th Oct. Well, Chippie, I could write reams and reams about the trip, or rather, the things we did and saw while in London, but it is rather late in the evening to attempt to get it all down tonight, so I'll give you a brief outline here and try to elaborate on some of it later. Suffice it to say, then, that most of our time was spent taking in the shows. We spent both nights at the Turkish bath. It was the first time I'd been there since April, and it certainly was wonderful to enjoy the luxury of the baths once again. The pictures we saw in in this order: "Mask of Demetrios", "Greenwich Village,” Dragon Seed," “Bathing Beauty" and "Sensations of 1945". We also took in a show.

It was a musical comedy titled "Happy and Glorious". We had seats smack in the center of the front now and the show was everything the title implies. Chippie, it was truly wonderful and I wished so much that you were there to share my enjoyment. The stars were Zoe Gail, (the lead in “Strike a New Note” which I saw last winter, and Tommy Trinder, a very personable and talented comedian. Zoe is a sweet-looking red-head, and Hollywood is overlooking a good bet in her. She dances and sings to please anyone and has a world of charm. Danner enjoyed the show almost as much as I did (nobody could enjoy it more). We left the Palladium all aglow with the exhilaration that the music and dancing and comedy inspired. For sheer entertainment, it was tops. As for the movies we saw, I particularly enjoyed "Bathing Beauty.” Don’t, if you can possibly help it, Sweet, miss this one! The music is superb! (particularly Ethel Smith's and Harry James’ solos). Esther Williams is as pretty as any girl has a right to be. Red Skelton plays his best role to date. His imitation of a gal getting up in the morning is a classic of its kind. The ballet school interlude is a scream. To boot, there are the exciting rhythms of Xavier Cugat and the lovely to look at color schemes of Natalie Kalmus. I saw this one alone because Danner insisted he wanted to see some of the sights. I still think he couldn't possibly have seen anything nicer than what I saw in the movies! Anyway, I enjoyed it so much that I sat half-way thru it again. "Dragon Seed" was very good, too, although K. Hepburn is for from being as impressive in the role of the Chinese girl as Luise Rainer was in the “Good Earth.” Of the two, "Good Earth" was far superior. But as I said before, it is a good picture and very much worth seeing. “Greenwich Village” is also very good entertainment. Carmen Miranda is her usual colorful, ebullient self. The romantic lead opposite Don Ameche is a beauty named Vivian Blaine, who, I think, is making her debut in this one. She is, without a doubt, one of our prettiest actresses, has a sweet voice, lovely legs, etc., but, alas, she lacks “sparkle.” Somehow, with all her commodities, she fails to “hit the spot.” The "Sensations of 1945" is a stinkeroo compared to the others. "Mask of Dimitrios is a suspenseful adventure story, which is also worthwhile, if you care for that sort of a picture. Sidney Greenstreet and Peter Lorre are excellent, as usual.

We ate mostly at the Eagle Club, but treated ourselves to one very excellent dinner at the "Criterion Restaurant” in Piccadilly Circus, (Remember the hors d'ouvres I had there in my previous visit?)

Well, Chippie, looks like the few letters that were waiting for me on my return will have to go unanswered for the time being. It is time for “lights out". It is also "date. time" – and time to remember how sweet you are, and how much I love you. Good-night, my darling. My love to the punkin and the family.

Your adoring
Phil
P.S. Enclosed are two snaps taken about two weeks ago. Hope you recognize them as your ever-lovin’ hubby. I cut one cause the angle was wrong and the nether half was distorted. You might send the negatives to Jack N. Maybe he can do something with them.
Posted by Marilyn at 11:34 AM