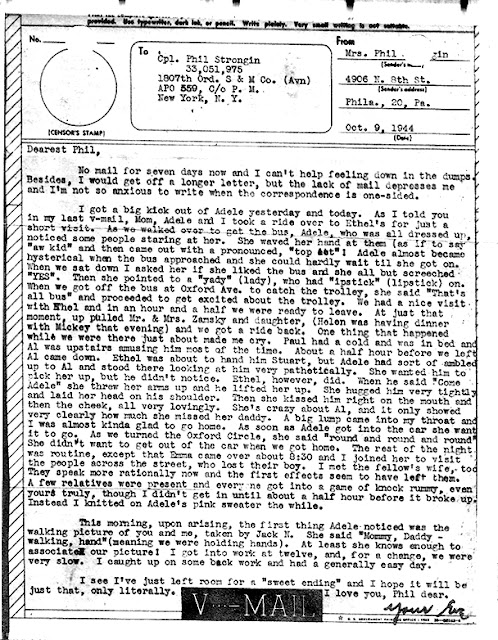 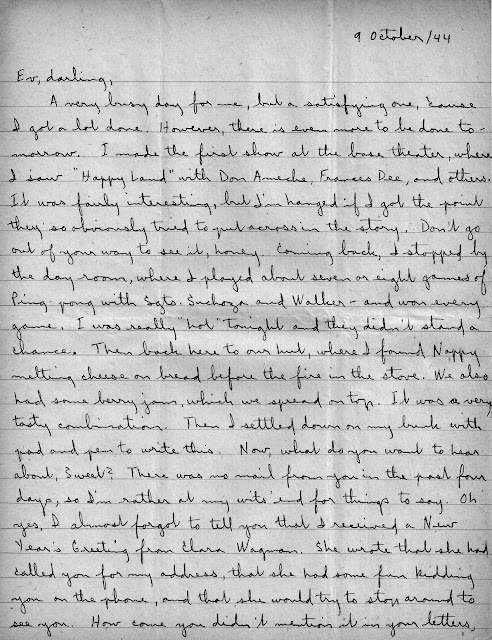 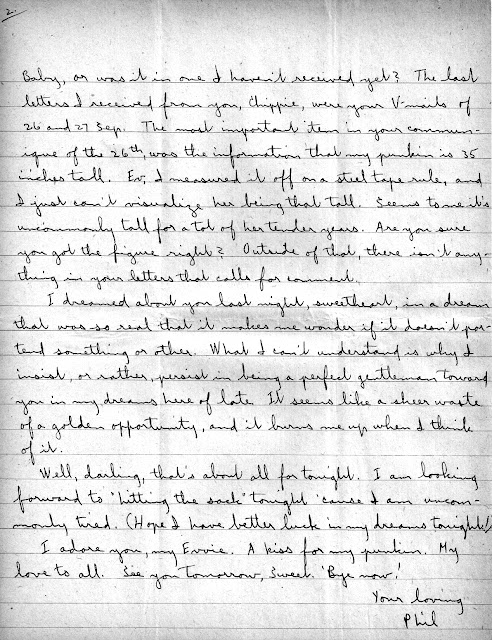 No mail for seven days now and I can't help feeling down in the dumps Besides, I would get off a longer letter, but the lack of mail depresses me and I’m not so anxious to write when the correspondence is one-sided.

I got a big kick out of Adele yesterday and today. As I told you in my last v-mail, Mom, Adele and I took a ride over to Ethel's for just a short visit. As we walked over to get the bus, Adele, who was all dressed up, noticed some people staring at her. She waved her hand at them (as if to say "aw kid” and then came out with a pronounced, "top eet!" Adele almost became hysterical when the bus approached and she could hardly wait til she got on. When we sat down I asked her if she liked the bus and she all but screeched. "YES". Then she pointed to a "yady" (lady), who had "ipstick" (lipstick) on. When we got off the bus at Oxford Ave. to catch the trolley, she said “That's all bus" and proceeded to get excited about the trolley. We had a nice visit with Ethel and in an hour and a half we were ready to leave. At just that moment, up pulled Mr. & Mrs. Zamsky and daughter. (Helen was having dinner with Mickey that evening) and we got a ride back. One thing that happened while we were there just about made me cry. Paul had a cold and was in bed and Al was upstairs amusing him most of the time. About a half hour before we left Al came down. Ethel was about to hand him Stuart, but Adele had sort of ambled up to Al and stood there looking at him very pathetically. She wanted him to pick her up, but he didn't notice. Ethel, however, did. When he said "Come Adele" she threw her arms up and he lifted her up. She hugged him very tightly and laid her head on his shoulder. Then she kissed him right on the mouth and then the cheek, all very lovingly. She's crazy about Al, and It only showed very clearly how much she missed her daddy. A big lump came into my throat and I was almost kinda glad to go home. As soon as Adele got into the car she wanted it to go. As we turned the Oxford Circle, she said "round and round and round.” She didn't want to get out of the car when we got home. The rest of the night was routine, except that Emma came over about 8:30 and I joined her to visit the people across the street, who lost their boy. I met the fellow's wife, too. They speak more rationally now and the first effects seem to have left them. A few relatives were present and everyone got into a game of knock rummy, even yours truly, though I didn't get in until about a half hour before it broke up. Instead I knitted on Adele's pink sweater the while.

This morning, upon arising, the first thing Adele. noticed was the walking picture of you and me, taken by Jack N. She said "Mommy, Daddy - walking. hand" (meaning we were holding hands). At least she knows enough to associate our picture! I got into work at twelve, and, for a change, we were very slow. I caught up on some back work and had a generally easy day.

I see I’ve just left room for a "sweet ending" and I hope it will be just that, only literally. I love you, Phil dear.
Your Eve

A very busy day for me, but a satisfying one, ’cause I got a lot done. However, there is even more to be done tomorrow. I made the first show at the base theater, where I saw "Happy Land" with Don Ameche, Frances Dee, and others. It was fairly interesting, but I’m hanged if I got the point they so obviously tried to put across in the story. Don't go out of your way to see it, honey. Coming back, I stopped by the day room, where I played about seven or eight games of Ping-pong with Sgts. Suchoza and Walker - and won every game. I was really "hot" tonight and they didn't stand a chance. Then back here to our hut, where I found Nappy melting cheese on bread before the fire in the stove. We also had some berry jam, which we spread on top. It was a very tasty combination. Then I settled down on my bunk with pad and pen to write this. Now, what do you want to hear about, Sweet? There was no mail from you in the past four days, so I'm rather at my wits end for things to say. Oh yes, I almost forgot to tell you that I received a New Year's Greeting from Clara Wagman. She wrote that she had called you for my address, that she had some fun kidding you on the phone, and that she would try to stop around to see you. How come you didn't mention it in your letters, Baby, or was it in one I haven’t received yet? The last letters I received from you, Chippie, were your V-mails of 26 and 27 Sep. The most important item in your communique of the 26th, was the information that my punkin is 35 inches tall. Ev, I measured it off on a steel tape rule, and I just can't visualize her being that tall. Seems to me it's uncommonly tall for a tot of her tender years. Are you sure you got the figure right? Outside of that, there isn't anything in your letters that calls for comment.

I dreamed about you last night, sweetheart, in a dream that was so real that it makes me wonder if it doesn't portend something or other. What I can't understand is why t insist, or rather, persist in being a perfect gentleman toward you in my dreams here of late. It seems like a sheer waste of a golden opportunity, and it burns me up when I think of it.

Well, darling, that's about all for tonight. I am looking forward to "hitting the sack” tonight ’cause I am uncommonly tired. (Hope I have better luck in my dreams tonight!)

I adore you, my Evvie. A kiss for my punkin. My love to all. See you tomorrow, Sweet. 'Bye now!

Your loving
Phil
Posted by Marilyn at 9:17 AM