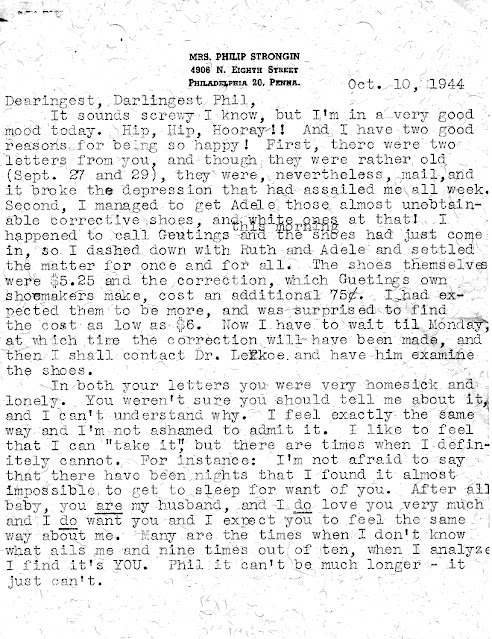 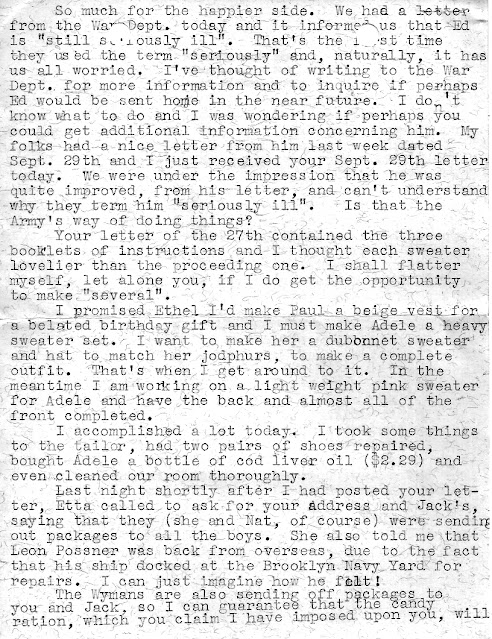 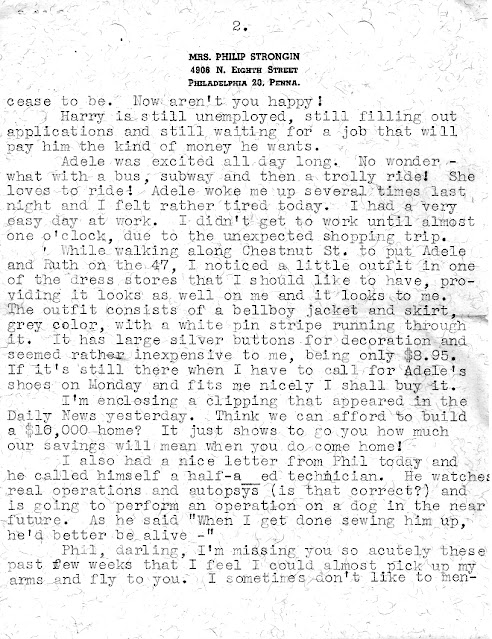 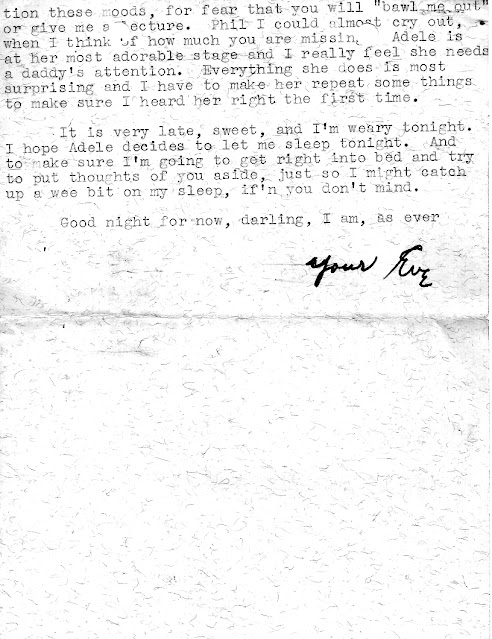 Oct. 10, 1944
Dearingest, Darlingest Phil,
It sounds screwy I know, but I'm in a very good mood today. Hip, Hip, Hooray!! And I have two good reasons for being so happy! First, there were two letters from you, and though they were rather old (Sept. 27 and 29), they were, nevertheless, mail, and it broke the depression that had assailed me all week. Second, I managed to get Adele those almost unobtainable corrective shoes, and white ones at that! I happened to call Geutings this morning and the shoes had just come in, so I dashed down with Ruth and Adele and settled the matter for once and for all. The shoes themselves were $5.25 and the correction, which Guetings own shoemakers make, cost an additional 75¢. I had expected them to be more, and was surprised to find the cost as low as $6. Now I have to wait til Monday, at which time the correction will have been made, and then I shall contact Dr. Lefkoe, and have him examine the shoes.

In both your letters you were very homesick and lonely. You weren't sure you should tell me about it, and I can't understand why. I feel exactly the same way and I'm not ashamed to admit it. I like to feel that I can "take it,” but there are times when I definitely cannot. For instance: I'm not afraid to say "that there have been nights that I found it almost impossible to get to sleep for want of you.” After all baby, you are my husband, and I do love you very much and I do want you and I expect you to feel the same way about me. Many are the times when I don't know what ails me and nine times out of ten, when I analyze I find it's YOU. Phil it can't be much longer - it just can't.

So much for the happier side. We had a letter from the War Dept. today and it informs us that Ed is "still seriously ill". That's the first time they used the term "seriously" and, naturally, it has us all worried. I've thought of writing to the War Dept. for more information and to inquire if perhaps Ed would be sent home in the near future. I don't know what to do and I was wondering if perhaps you could get additional information concerning him. My folks had a nice letter from him last week dated Sept. 29th and I just received your Sept. 29th letter today. We were under the impression that he was quite improved, from his letter, and can't understand why they term him "seriously ill". Is that the Army's way of doing things?

Your letter of the 27th contained the three booklets of instructions and I thought each sweater lovelier than the proceeding one. I shall flatter myself, let alone you, if I do get the opportunity to make "several".

I promised Ethel I'd make Paul a beige vest for a belated birthday gift and I must make Adele a heavy sweater set. I want to make her a dubonnet sweater and hat to match her jodhpurs, to make a complete outfit. That's when I get around to it. In the meantime I am working on a light weight pink sweater for Adele and have the back and almost all of the front completed.

I accomplished a lot today. I took some things to the tailor, had two pairs of shoes repaired, bought Adele a bottle of cod liver oil ($2.29) and even cleaned our room thoroughly.

Last night shortly after I had posted your letter, Etta called to ask for your address and Jack’s, saying that they (she and Nat, of course) were sending out packages to all the boys. She also told me that Leon Possner was back from overseas, due to the fact that his ship docked at the Brooklyn Navy Yard for repairs. I can just imagine how he felt!

The Wymans are also sending off packages to you and Jack, so I can guarantee that the candy ration, which you claim I have imposed upon you, will cease to be. Now, aren't you happy!

Harry is still unemployed, still filling out applications and still waiting for a job that will pay him the kind of money he wants.

Adele was excited all day long. No wonder - what with a bus, subway and then a trolly ride! She loves to ride! Adele woke me up several times last night and I felt rather tired today. I had a very easy day at work. I didn't get to work until almost one o'clock, due to the unexpected shopping trip.

While walking along Chestnut St. to put Adele and Ruth on the 47, I noticed a little outfit in one of the dress stores that I should like to have, providing it looks as well on me and it looks to me.

The outfit consists of a bellboy jacket and skirt, grey color, with a white pin stripe running through it. It has large silver buttons for decoration and seemed rather inexpensive to me, being only $8.95. If it's still there when I have to call for Adele's shoes on Monday and fits me nicely I shall buy it.

I'm enclosing a clipping that appeared in the Daily News yesterday. Think we can afford to build a $10,000 home? It just shows to go you how much our savings will mean when you do come home!

I also had a nice letter from Phil today and he called himself a half-a   ed technician. He watches real operations and autopays (is that correct?) and is going to perform an operation on a dog in the near future. As he said "When I get done sewing him up, he’d better be alive -"

Phil, darling, I'm missing you so acutely these past few weeks that I feel I could almost pick up my arms and fly to you. I sometimes don't like to mention these moods, for fear that you will "bawl me out” or give me a lecture. Phil I could almost cry out, when I think of how much you are missing. Adele is at her most adorable stage and I really feel she needs a daddy's attention. Everything she does is most surprising and I have to make her repeat some things to make sure I heard her right the first time.

It is very late, sweet, and I'm weary tonight. I hope Adele decides to let me sleep tonight. And to make sure I'm going to get right into bed and try to put thoughts of you aside, just so I might catch up a wee bit on my sleep, if’n you don't mind.

Good night for now, darling, I am, as ever