Post #482 - October 13, 1944 Harry Quit the Navy Yard, as He Discovered the Work He Was Supposed to Do is Too Dangerous and Had I Written What Was in My Mind, It Would Have Proved Far From Being an Entertaining Letter 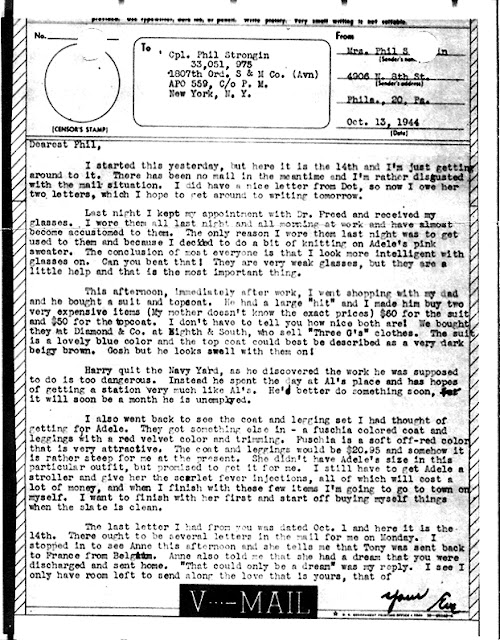 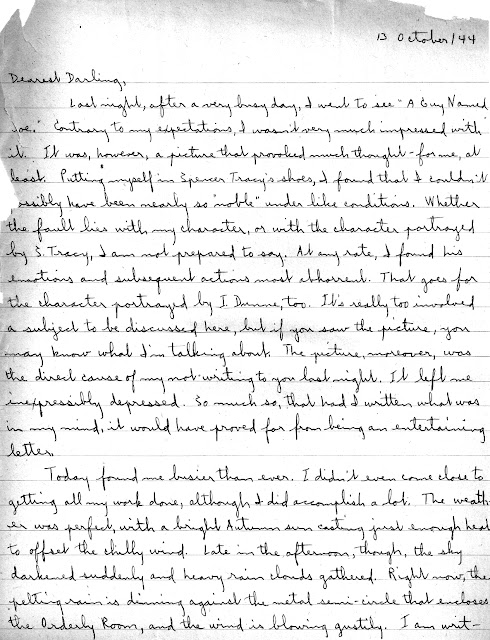 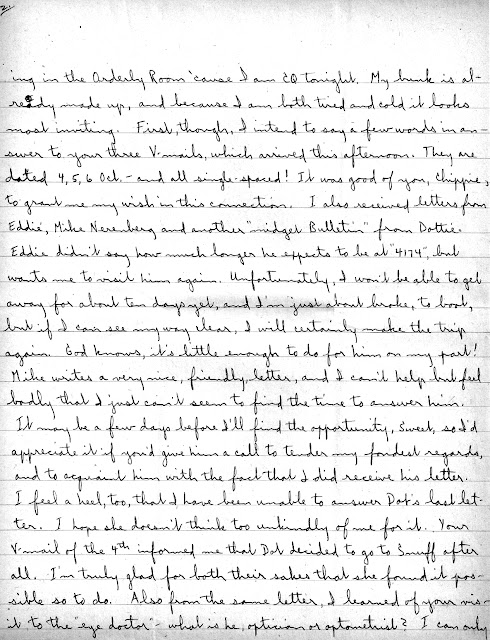 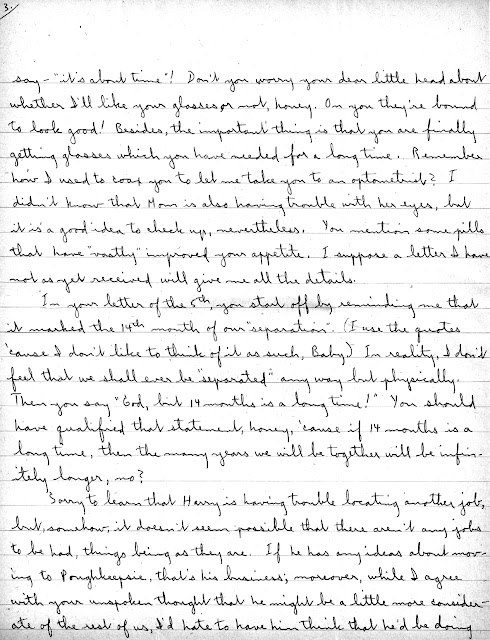 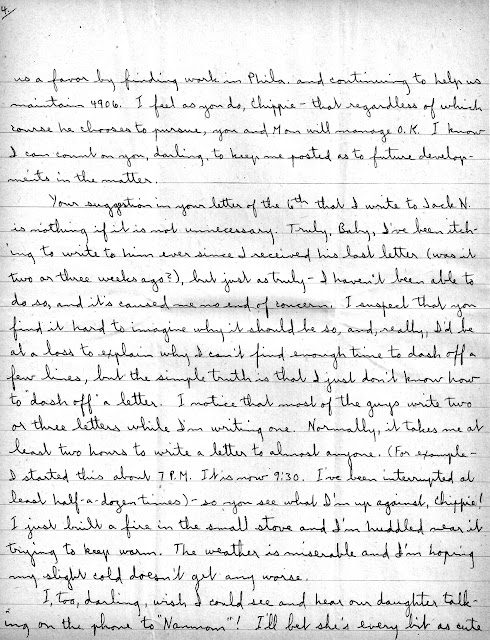 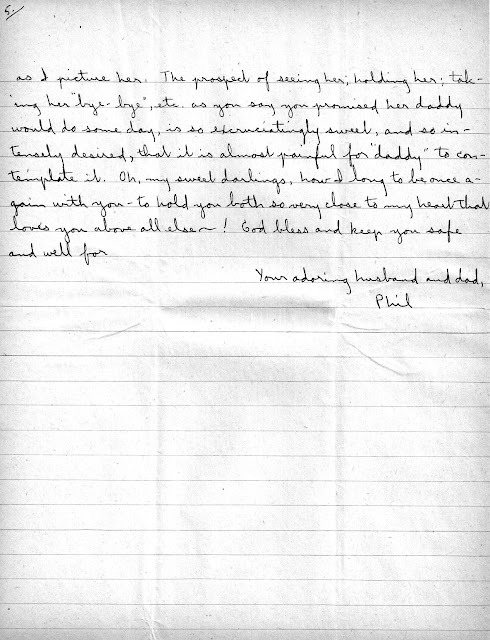 Dearest Phil,
I started this yesterday, but here it is the 14th and I’m just getting around to it. There has been no mail in the meantime and I'm rather disgusted with the mail situation. I did have a nice letter from Dot, so now I owe her two letters, which I hope to get around to writing tomorrow.

Last night I kept my appointment with Dr. Freed and received my glasses. I wore them all last night and all morning at work and have almost become accustomed to them. The only reason I wore them last night was to get used to them and because I decided to do a bit of knitting on Adele's pink sweater. The conclusion of most everyone is that I look more Intelligent with classes on. Can you beat that! They are very weak glasses, but they are a little help and that is the most important thing.

This afternoon, immediately after work, I went shopping with my dad and he bought a suit and top coat. He had a large "hit" and I made him buy two very expensive items (My mother doesn't know the exact prices) $60 for the suit and $50 for the top coat. I don't have to tell you how nice both are! We bought them at Diamond & Co. at Eighth & South, who sell "Three G's” clothes. The suit is a lovely blue color and the top coat could best be described as a very dark beigy brown. Gosh but he looks swell with them on!

Harry quit the Navy Yard, as he discovered the work he was supposed to do is too dangerous. Instead he spent the day at Al's place and has hopes of getting a station very much like Al's. He'd better do something soon, for It will soon be month he is unemployed.

I also went back to see the coat and legging set I had thought of getting for Adele, They got something else in - A fuschia colored coat and leggings with a red velvet color and trimming. Fuschia is a soft off-red color that is very attractive. The coat and leggings would be $20.95 and somehow it is rather steep for me at the present. She didn't have Adele's size In this particular outfit, but promised to get it for me. I still have to get Adele a stroller and give her the scarlet fever infections, all of which will cost a lot of money, and when I finish with those few Items I'm going to go to town on myself. I want to finish with her first and start off buying myself things when the slate is clean.

The last letter I had from you was dated Oct. 1 and here it is the 14th. There ought to be several letters in the mail for me on Monday. I stopped in to see Anne this afternoon and she tells me that Tony was sent back to France from Belgium. Anne also told me that she had a dream that you were discharged and sent home, “that could only be a dream" was my reply. I see I only have room left to send along the love that is yours, that of

Last night, after a very busy day, I went to see "A Guy Named Joe." Contrary to my expectations, I wasn’t very much impressed with it. It was, however, a picture that provoked much thought - for me, at least. Putting myself in Spencer Tracy's shoes, I found that I couldn't possibly have been nearly so “noble” under like conditions. Whether the fault lies with my character, or with the character portrayed by S. Tracy, I am not prepared to say. All any rate, I found his emotions and subsequent actions most abhorrent. That goes for the character portrayed by I. Dunne, too. It's really too involved a subject to be discussed here, but if you saw the picture, you may know what I'm talking about. The picture, moreover, was the direct cause of my not writing to you last night. It left me inexpressibly depressed. So much so, that had I written what was in my mind it would have proved far from being an entertaining letter.

Today found me busier than ever. I didn't even come close to getting all my work done, although I did accomplish a lot. The weather was perfect, with a bright Autumn sun casting just enough heat to offset the chilly wind. Late in the afternoon, though, the sky darkened suddenly and heavy rain clouds gathered. Right now, the pelting rain is dinning against the metal semi-circle that encloses the Orderly Room, and the wind is blowing gustily. I am writing in the Orderly Room 'cause I am CQ tonight. My bunk is already made up, and because I am both tired and cold it looks most inviting. First, though, I intend to say a few words in answer to your three V-mails, which arrived this afternoon. They are dated 4, 5, 6 Oct, and all single-spaced! It was good of you, Chippie, to grant me my wish in this connection. I also received letters from Eddie, Mike Nerenberg and another “midget Bulletin" from Dottie. Eddie didn't say how much longer he expects to be at "4174", but wants me to visit him again. Unfortunately, I won't be able to get away for about ten days yet, and I'm just about broke, to boot, but if I can see any way clear, I will certainly make the trip again. God knows, it's little enough to do for him on my part! Mike writes a very nice, friendly, letter, and I can't help but feel badly that I just can't seem to find the time to answer him. It may be a few days before I'll find the opportunity, Sweet, so l’d appreciate it if you'd give him a call to tender any fondest regards, and to acquaint him with the fact that I did receive his letter. I feel a heel, too, that I have been unable to answer Dot's last letter. I hope she doesn't think too unkindly of me for it. Your V-mail of the 4th informed me that Dot decided to go to Snuff after all. I'm truly glad for both their sakes that she found it possible so to do. Also from the same letter, I learned of your visit to the “eye doctor" - what is he, optician or optometrist? I can only say "it's about time"! Don't you worry your dear little head about whether I’ll like your glasses or not, honey. On you they're bound to look good! Besides, the important thing is that you are finally getting glasses which you have needed for a long time. Remember how I used to coax you to let me take you to an optometrist? I didn't know that Mom is also having trouble with her eyes, but it is a good idea to check up, nevertheless. You mention some pills that have “vastly" improved your appetite. I suppose a letter I have not as yet received will give me all the details.
In your letter of the 5th you start off by reminding me that it marked the 14th month of our “separation". (I use the quotes 'cause I don't like to think of it as such, Baby) In reality, I don't feel that we shall ever be separated" any way but physically, Then you say "God, but 14 months is a long time!" You should have qualified that statement, honey, 'cause if 14 months is a long time, then the many years we will be together will be infinitely longer, no?

Sorry to learn that Harry is having trouble locating another job, but, somehow, it doesn't seem possible that there aren't any jobs to be had, things being as they are. If he has any ideas about moving to Poughkeepsie, that's his business; moreover, while I agree with your unspoken thought that he might be a little more considerate of the rest of us, I'd hate to have him think that he'd be doing us a favor by finding work in Phila. and continuing to help us maintain 4906. I feel as you do, Chippie - that regardless of which course he chooses to pursue, you and Mom will manage O.K. I know I can count on you, darling to keep me posted as to future developments in the matter.
Your suggestion in your letter of the 6th that I write to Jack N. is nothing if it is not unnecessary. Truly, Baby, I've been itching to write to him ever since I received his last letter (was it two or three weeks ago?), but just as truly - I haven't been able to do so, and it’s caused me no end of concern. I suspect that you find it hard to imagine why it should be so, and really, I'd be at a loss to explain why I can't find enough time to “dash off” a few lines, but the simple truth is that I just don't know how to “dash off” a letter. I notice that most of the guys write two or three letters while i'm writing one. Normally, it takes me at least two hours to write a letter to almost anyone. (For example I started this about 7 P.M. It is now 9:30. I've been interrupted at leash half-a-dozen times) - so you see what I'm up against, Chippie! I just built a fire in the small stove and I'm huddled near it trying to keep warm. The weather is miserable and i'm hoping my slight cold doesn't get any worse.

I, too, darling, wish I could see and hear our daughter talking on the phone to "Nanmom"! I'll bet she's every bit as cute as I picture her. The prospect of seeing her, holding her, taking her bye-bye", etc, as you say you promised her daddy would do some day, is so excruciatingly sweet, and so in tensely desired, that it is almost painful for “daddy" to contemplate it. Oh my sweet darlings, how I long to be once again with you to hold you both so very close to my heart that loves you above all else! God bless and keep you safe and well for
Your adoring husband and dad,
Phil
Posted by Marilyn at 3:35 PM