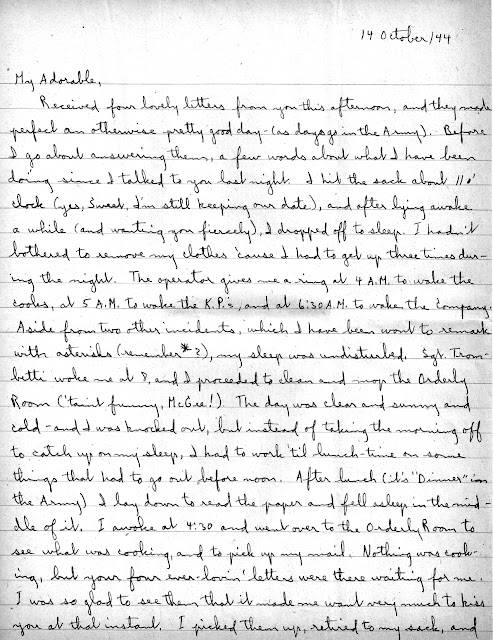 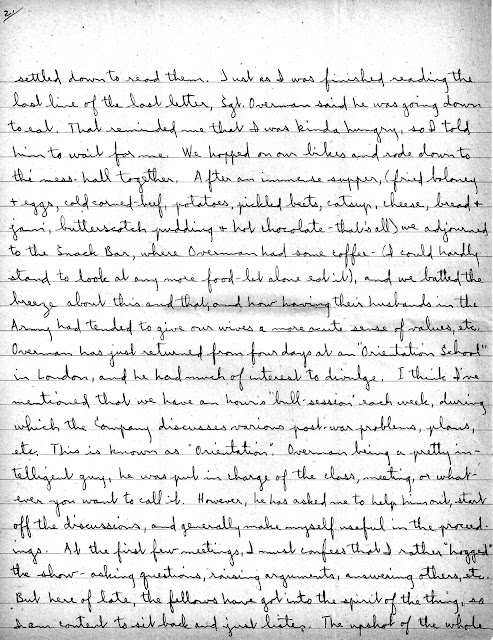 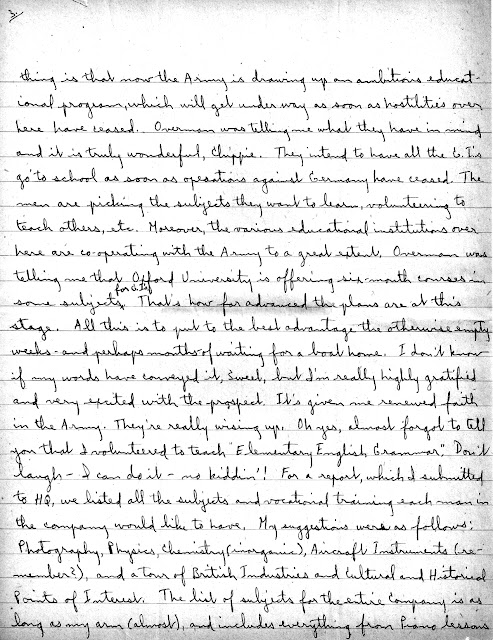 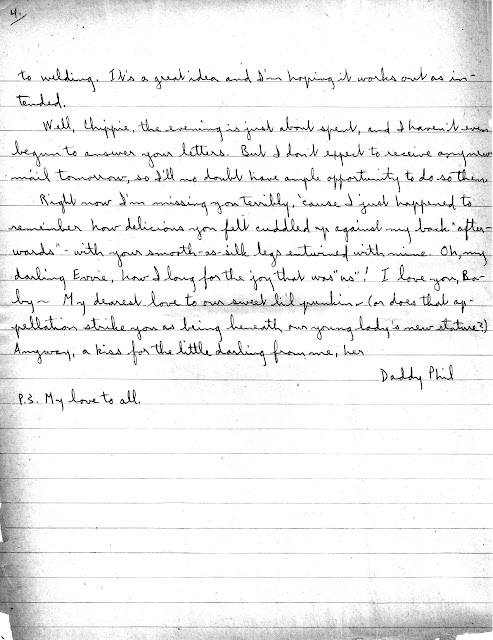 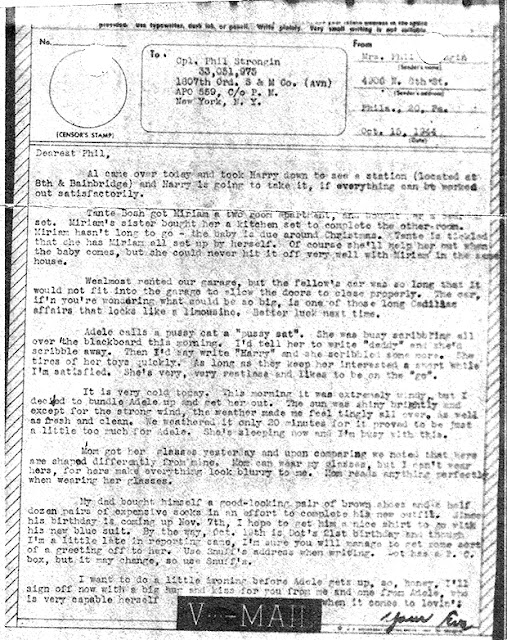 Received four lovely letters from you this afternoon, and they made perfect an otherwise pretty good day - (as days go in the Army). Before I go about answering them, a few words about what I have been doing since I talked to you last night. I hit the sack about 11 o’clock (yes, Sweet, I'm still keeping our date), and after lying awake a while (and wanting you fiercely), I dropped off to sleep. I hadn't bothered to remove my clothes ’cause I had to get up three times during the night. The operator gives me a ring at. 4 A.M. to wake the cooks, at 5 A.M. to wake the K.P.'s, and at 6:30 A.M. to wake the company. Aside from two other incidents, which I have been wont to remark with asterisks (remember *8), my sleep was undisturbed. Sgt. Trombetti woke me al 8, and I proceeded to clean and mop the Orderly Room (’taint funny, McGee!). The day was clear and sunny and cold - and I was knocked out, but instead of taking the morning off to catch up on my sleep, I had to work 'til lunch time on some things that had to go out before noon. After lunch (it's "Dinner” in the Army) I lay down to read the paper and fell asleep in the middle of it. I awoke at 4:30 and went over to the Orderly Room to see what was cooking, and to pick up my mail. Nothing was cooking, but your four ever-lovin’ letters were here waiting for me. I was so glad to see them that it made me want very much to kiss you at that instant. I picked them up, retired to my sack, and settled down to read them. Just as I was finished reading the last line of the last letter, Sgt. Overman said he was going down to eat. That reminded me that I was kinda hungry, so I told him to wait for me. We hopped on our bikes and rode down to the mess-hall together. After an immense supper, (fried baloney & eggs, cold corned beef, potatoes, pickled beets, catsup, cheese, bread & jam, butterscotch pudding & hot chocolate - that's all) we adjourned to the Snack Bar, where Overman had some coffee. (I could hardly stand to look at any more food - let alone eat it), and we batted the breeze about this and that, and how having their husbands in the Army had tended to give our wives a more acute sense of values, etc. Overman has just returned from four days at an “Orientation School" in London, and he had much of interest to divulge. I think I've mentioned that we have an hour's "bull-session” each week, during which the company discusses various post-war problems, plans, etc. This is known as "orientation.” Overman being a pretty intelligent guy, he was put in charge of the class, meeting, or whatever you want to call it. However, he has asked me to help him out, start off the discussions, and generally make myself useful in the proceedings. At the first four meetings, I must confess that I rather “hogged" the show - asking questions, raising arguments, answering others, etc. But here of late, the fellows have got into the spirit of the thing, so I am content to sit back and just listen. The upshot of the whole thing is that now the Army is drawing up an ambitious educational program, which will get underway as soon as hostilities over here have ceased. Overman was telling me what they have in mind and it is truly wonderful, Chippie. They intend to have all the G.I.s go to school as soon as operations against Germany have ceased. The men are picking the subjects they want to learn, volunteering to teach others, etc. Moreover, the various educational institutions over here are co-operating with the Army to a great extent. Overman was telling me that Oxford University is offering six month courses in some subjects for G.I.s. That's how far advanced the plans are at this stage. All this is to put to the best advantage the otherwise empty weeks and perhaps months of waiting for a boat home. I don't know if my words have conveyed it, Sweet, but I'm really highly gratified and very excited with the prospect. It's given me renewed faith in the Army. They're really wising up Oh yes, almost forgot to tell you that I volunteered to teach "Elementary English Grammar.” Don't laugh - I can do it - no kiddin! For a report, which I submitted to HQ, we listed all the subjects and vocational training each man in the company would like to have, My suggestions were as follows: Photography, Physics, Chemistry (inorganic), Aircraft Instruments (remember?), and a tour of British Industries and Cultural and Historical Points of Interest. The list of subjects for the entire company is as long as any arm (almost), and includes everything from piano lessons to welding. It's a great idea and I'm hoping it works out as intended.
Well, Chippie, the evening is just about spent, and I haven't even begun to answer your letters. But I don't expect to receive any new mail tomorrow, so I'll no doubt have ample opportunity to do so then.

Right now I'm missing you terribly, ’cause I just happened to remember how delicious you felt cuddled up against my back “afterwards" - with your smooth-as-silk legs entwined with mine. Oh, my darling Evvie, how I long for the joy that was “us"! I love you, Baby—My dearest love to our sweet lil punkin—(or does that appellation strike you as being beneath our young lady's new stature?) Anyway, a kiss for the little darling from me, her

Daddy Phil
P.S. My love to all.
October 15th, 1944
Dearest Phil,
Al came over today and took Harry down to see a station located at 8th and Bainbridge and Harry is going to take it, if everything can be worked out satisfactorily.
Tante Bosh got Miriam a two room apartment and bought her a bedroom set. Miriam’s sister bought her a kitchen set to complete the other room. Miriam hasn't long to go. The baby is due around Christmas. Tante is tickled that she has Miriam all set up by herself. Of course she'll help her out when the baby comes, but she could never hit it off very well with Miriam in the same house.
We almost rented our garage, but the fellow’s car was so long that it would not fit into the garage to allow the doors to close properly. The car if’n you’re wondering what could be so big, is one of those long Cadillac affairs that looks like a limousine. Better luck next time.
Adele calls a pussy cat, a “pussy sat”. She was busy scribbling all over the blackboard this morning. I’d tell her to write “daddy” and she scribbles away. Then I'd say write “Harry,” and she'd scribble some more. She tires of her toys quickly. As long as they keep her interested a short while I'm satisfied. She's very, very restless and likes to be on the “go”.
It is very cold today. This morning it was extremely windy, but I decided to bundle Adele up and get her out. The sun was shining brightly and except for the strong wind, the weather made me feel tingly all over, as well as fresh and clean. We weathered it only 20 minutes for it proved to be just a little too much for Adele. She's sleeping now and I'm busy with this.
Mom got her glasses yesterday and upon comparing we noted that hers are shaped differently from mine. Mom can wear my glasses, but I can't wear hers, for hers make everything look blurry to me. Mom reads anything perfectly when wearing her glasses.
My dad bought himself a good-looking pair of brown shoes and a half dozen pairs of expensive socks in an effort to complete his new outfit. Since his birthday is coming up November 7th, I hope to get him a nice shirt to go with his new blue suit. By the way, October 19th is Dot's 21st birthday and though I'm a little late in reporting same, I'm sure you will manage to get some sort of a greeting off to her. Use Snuff’s address when writing. Dot has a post office box, but it may change, so use Snuff’s.
I want to do a little ironing before Adele gets up, so honey, I'll sign off now with a big hug and kiss for you from me and one from Adele who is very capable herself when it comes to lovin’!
Your Eve
Posted by Marilyn at 10:59 AM