Post #489 - October 21, 22, 1944 I Finally Got Off All Those Letters I’ve Been Wanting to Write and My Brother Jack Has Become an Excellent Dancer 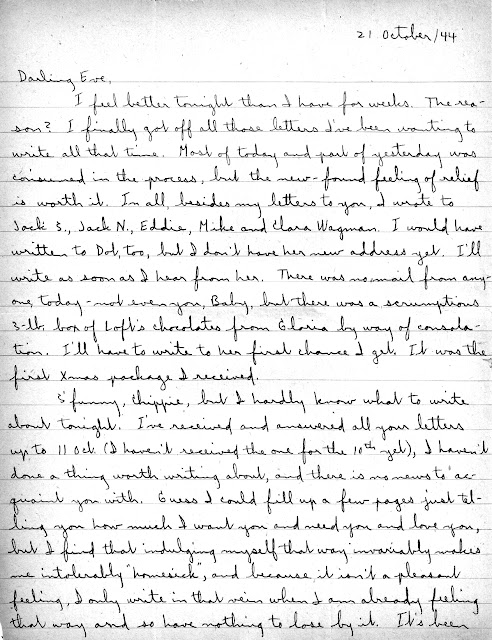 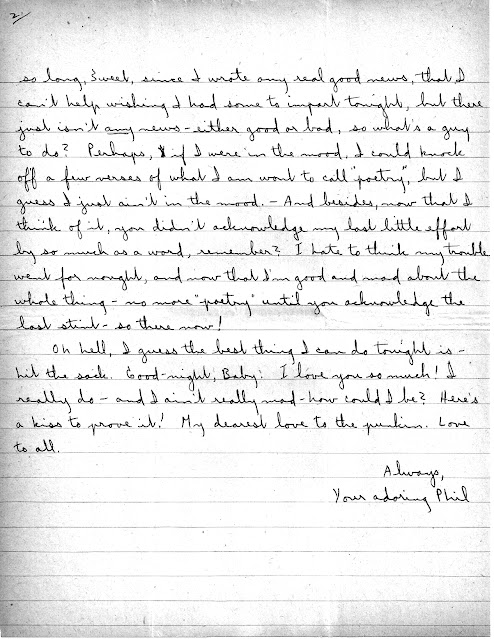 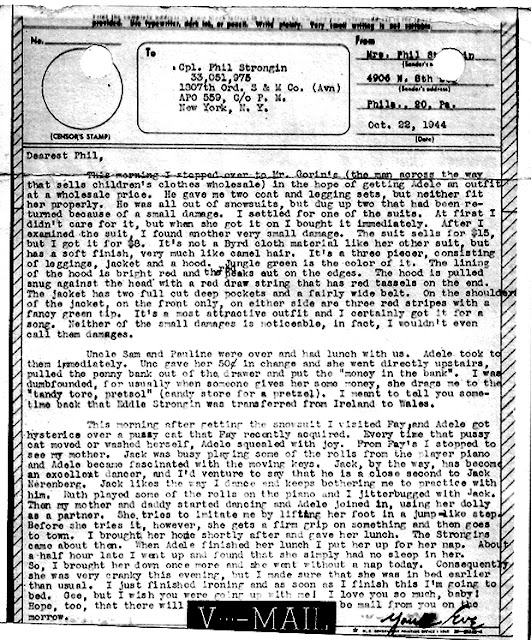 I feel better tonight than t have for weeks. The reason? I finally got off all those letters I've been wanting to write all that time. Most of today and part of yesterday was consumed in the process, but the new-found feeling of relief is worth it. In all, besides my letters to you, I wrote to Jack S., Jack N., Eddie, Mike and Clara Wagman. I would have written to Dot, too, but I don't have her new address yet. I'll write as soon as I hear from her. There was no mail from any one today - not even you, Baby, but there was a scrumptious 3-lb. box of Loft's chocolates from Gloria by way of consolation. I'll have to write to her first chance I get. It was the first Xmas package I received.

S’funny, Chippie, but I hardly know what to write about tonight! I've received and answered all your letters. up to 11 Oct. (I haven't received the one for the 10th yet). I haven't done a thing worth writing about, and there is no news to acquaint you with. Guess I could fill up a few pages just telling you how much I want you and need you and love you, but I find that indulging myself that way invariably makes me intolerably homesick, and because it isn’t a pleasant feeling, I only write in that vein when I am already feeling that way and so have nothing to lose by it. It's been so long, Sweet, since I wrote any real good news, that I can’t help wishing I had some to impart tonight, but there just isn't any news - either good or bad, so what's a guy to do? Perhaps, if I were in the mood, I could knock off a few verses of what I am wont to call “poetry,” but I guess I just ain't in the mood. - And besides, now that I think of it, you didn't acknowledge my last little effort by so much as a word, remember? I hate to think my trouble went for naught, and now that I'm good and mad about the whole thing - no more "poetry” until you acknowledge the last stint - so there now!
Oh hell, I guess the best thing I can do tonight is - hit the sack. Good-night, Baby. I love you so much! I really do - and I ain't really mad -  how could I be? Here's a kiss to prove it! My dearest love to the punkin. Love to all.

This morning I stopped over to Mr. Gorin’s (the man across the way that sells children's clothes wholesale) in the hope of getting Adele an outfit at wholesale price. He gave me two coat and legging sets, but neither fit her properly. He was all out of snowsuits, but dug up two that had been returned because of a small damage. I settled for one of the suits. At first I didn't care for it, but when she got it on I bought it immediately. After I examined the suit, I found another very small damage. The suit sells for $15, but I got it for $8. It's not a Byrd cloth material like her other suit, but has a soft finish, very much like camel hair. It's a three piecer, consisting of leggings, jacket and a hood. Jungle green is the color of it. The lining of the hood is bright red and the red peeks out on the edges. The hood is pulled snug against the head with a red draw string that has red tassels on the end. The jacket has two full cut deep pockets and a fairly wide belt. On the shoulder of the jacket, on the front only, on either side are three red stripes with a fancy green tip. It's a most attractive outfit and I certainly got it for a song. Neither of the small damages is noticeable, in fact, I wouldn't even call them damages.

Uncle Sam and Pauline were over and had lunch with us. Adele took to them immediately. Unc gave her 50¢ in change and she went directly upstairs, pulled the penny bank out of the drawer and “put the money in the bank". I was dumbfounded, for usually when someone gives her some money, she drags me to the "tandy tore, pretsol" (candy store for a pretzel). I meant to tell you sometime back that Eddie Strongin was transferred from Ireland to Wales.

This morning after getting the snowsuit I visited Fay, and Adele got hysterics over a pussy cat that Fay recently acquired. Every time that pussy cat moved or washed herself, Adele squealed with joy. From Fay’s I stopped to see my mother. Jack was busy playing some of the rolls from the player piano and Adele became fascinated with the moving keys. Jack, by the way, has become an excellent dancer, and I'd venture to say that he is a close second to Jack Nerenberg. Jack likes the way I dance and keeps bothering me to practice with him. Ruth played some of the rolls on the piano and I jitterbugged with Jack. Then my mother and daddy started dancing and Adele joined in, using her dolly as a partner. She, tries to imitate me by lifting her foot in a jump-like step. Before she tries it, however, she gets a firm grip on something and then goes to town. I brought her home shortly after and gave her lunch. The Strongins came about then. When Adele finished her lunch I put her up for her nap. About a half hour later I went up and found that she simply had no sleep in her. So, I brought her down once more and she went without a nap today. Consequently she was very cranky this evening, but I made sure that she was in bed earlier than usual. I just finished ironing and as soon as I finish this I'm going to bed. Gee, but I wish you were going up with me! I love you so much, baby! Hope, too, that there will be mail from you on the morrow.