Post #503 - November 7, 1944 Etta’s Daughter’s Name Will Be Vicki Paula Blank and Pvt. Stahle is Possessed of a Delicious Sense of Humor, and Being a Talented Story-Teller and Mimic, He has Me Laughing thru Most of the Day 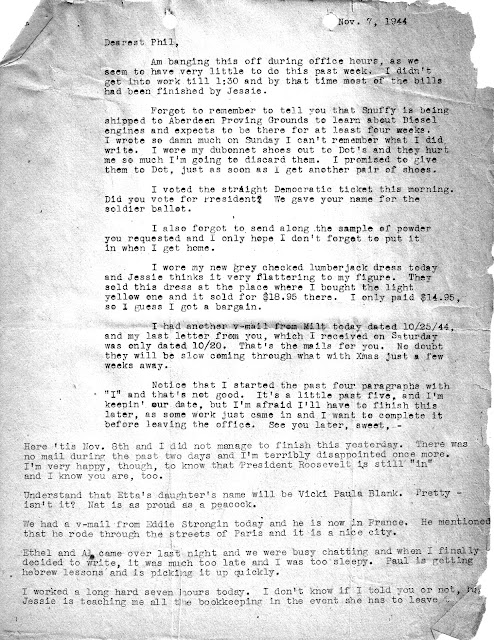 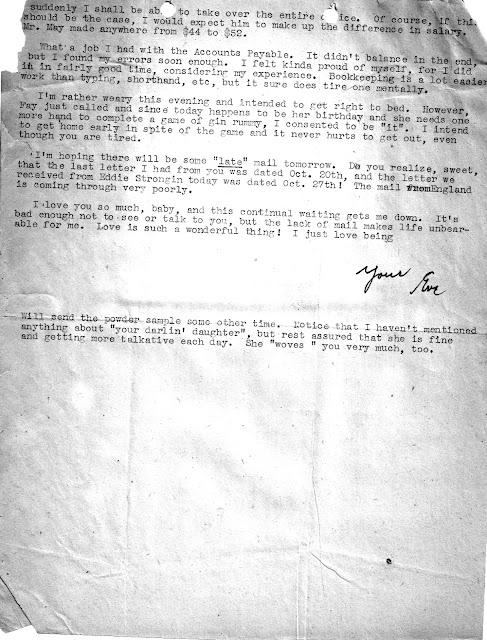 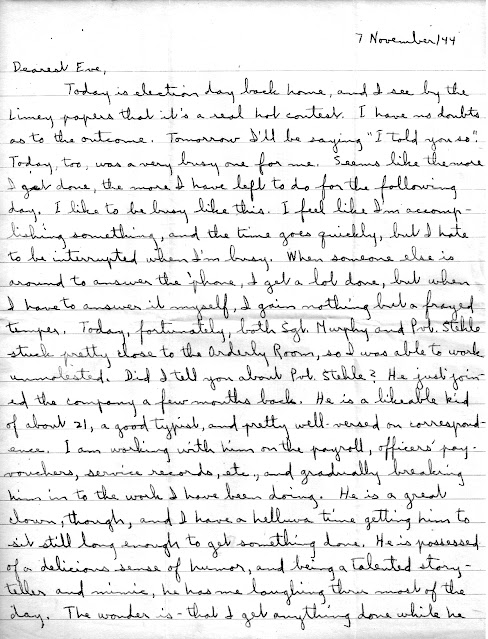 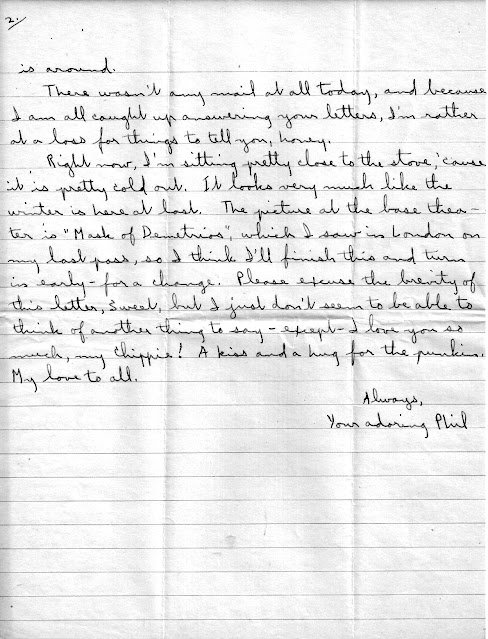 Am banging this off during office hours, as we seem to have very little to do this past week. I didn't get into work till 1:30 and by that time most of the bills had been finished by Jessie.

Forgot to remember to tell you that Snuffy is being shipped to Aberdeen Proving Grounds to learn about Diesel engines and expects to be there for at least four weeks. I wrote so damn much on Sunday I can't remember what I did write. I wore my dubonnet shoes out to Dot's and they hurt me so much I'm going to discard them. I promised to give them to Dot, just as soon as I get another pair of shoes.

I voted the straight Democratic ticket this morning. Did you vote for president? We gave your name for the soldier ballot.

I also forgot to send along the sample of powder you requested and I only hope I don't forget to put it in when I get home.

I wore my new grey checked lumberjack dress today and Jessie thinks it very flattering to my figure. They sold this dress at the place where I bought the light yellow one and it sold for $18.95 there. I only paid $14.95, so I guess I got a bargain.

I had another v-mail from Milt today dated 10/25/44, and my last letter from you, which I received on Saturday was only dated 10/20. That's the mails for you. No doubt they will be slow coming through what with Xmas just a few weeks away.

Notice that I started the past four paragraphs with "I" and that's not good. It's a little past five, and I'm keepin' our date, but I'm afraid I'll have to finish this later, as some work just came in and I want to complete it before leaving the office. See you later, sweet,

Here it is Nov. 8th and I did not manage to finish this yesterday. There was no mail during the past two days and I'm terribly disappointed once more. I'm very happy, though, to know that President Roosevelt is still "in" and I know you are, too.

Understand that Etta's daughter’s name will be Vicki Paula Blank, Pretty isn't it? Nat is as proud as a peacock.

We had a v-mail from Eddie Strongin today and he is now in France. He mentioned that he rode through the streets of Paris and it is a nice city.

Ethel and Al came over last night and we were busy chatting and when I finally decided to write, it was much too late and I was too sleepy, Paul is getting hebrew lessons' and is picking it up quickly.

I worked a long hard seven hours today. I don't know if I told you or not, but Jessie is teaching me all the bookkeeping in the event she has to leave suddenly. I shall be able to take over the entire office. Of course, if this. should be the case, I would expect him to make up the difference in salary. Mr. May made anywhere from $44 to $52.

What a job I had with the Accounts Payable. It didn't balance in the end, but I found my errors soon enough. I felt kinda proud of myself, for I did it in fairly good time, considering my experience. Bookkeeping is a lot easier work than typing, shorthand, etc, but it sure does tire one mentally.

I'm rather weary this evening and intended to get right to bed. However, Fay just called and since today happens to be her birthday and she needs one more hand to complete a game of gin rummy, I consented to be "it". I intend to get home early in spite of the game and it never hurts to get out, even though you are tired.

"I'm hoping there will be some "late" mail tomorrow. Do you realize, sweet, that the last letter I had from you was dated Oct. 20th, and the letter we received from Eddie Strongin today was dated Oct. 27th! The mail from England is coming through very poorly.

I love you so much, baby, and this continual waiting gets me down. It's bad enough not to see or talk to you, but the lack of mail makes life unbearable for me. Love is such a wonderful thing! I just love being

Will send the powder sample some other time. Notice that I haven't mentioned anything about your darlin' daughter', but rest assured that she is fine and getting more talkative each day. She "woves " you very much, too.
7 November 1944

Dearest Eve,
Today is election day back home, and I see by the limey papers that it's a real hot contest. I have no doubts as to the outcome. Tomorrow I'll be saying "I told you so.” Today, too, was a very busy one for me. Seems like the more I get done, the more I have left to do for the following day. I like to be busy like this. I feel like I'm accomplishing something, and the time goes quickly, but I hate to be interrupted when t'm busy. When someone else is around to answer the phone, I get a lot done, but when I have to answer it myself, I gain nothing but a frayed temper. Today, fortunately, both Sgt. Murphy and Pvt. Stahle stuck pretty close to the Orderly Room, so I was able to work unmolested. Did I tell you about Pvt. Stahle? He just joined the company a few months back. He is a likable kid of about 21, a good typist, and pretty well-versed on correspondence. I am working with him on the payroll, officers pay.vouchers, service records, etc. and gradually breaking him in to the work I have been doing. He is a great clown, though, and I have a helluva time getting him to sit still long enough to get something done. He is possessed of a delicious sense of humor, and being a talented story-teller and mimic, he has me laughing thru most of the day. The wonder is that 't get anything done while he is around.

There wasn't any mail at all today, and because I am all caught up answering your letters, I'm rather at a loss for things to tell you, honey.

Right now, I'm sitting pretty close to the stove, ’cause it is pretty cold out. It looks very much like the winter is here at last. The picture at the base theater is "Mask of Demetrios", which I saw in London on my last pass, so I think I'll finish this and turn in early - for a change. Please excuse the brevity of this letter, Sweet, but I just don't seem to be able to think of another thing to say - except - I love you so much, my Chippie! Å kiss and a hug for the punkin. My love to all.

Always,
Your adoring Phil
Posted by Marilyn at 12:40 PM