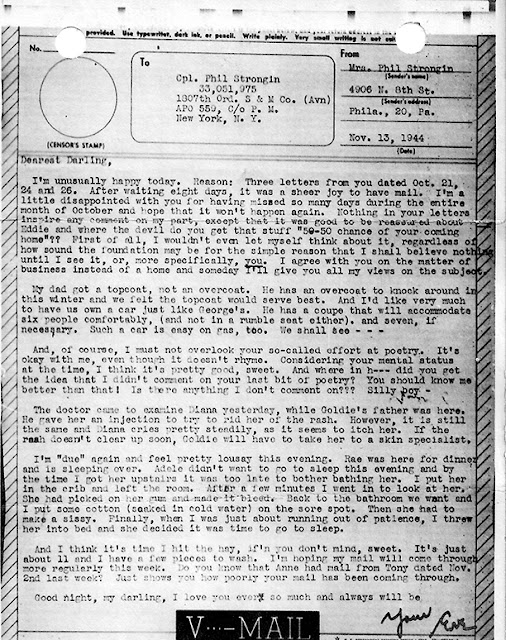 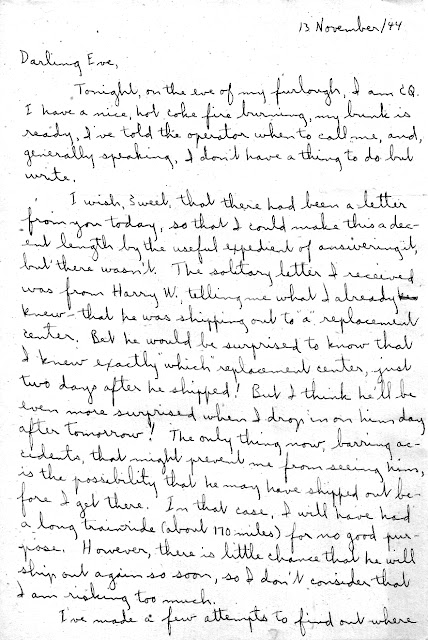 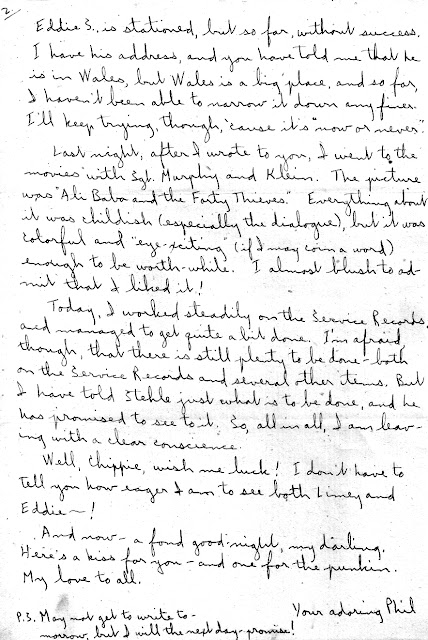 I'm unusually happy today. Reason: Three letters from you dated Oct. 21, 24 and 26. After waiting eight days, it was a sheer joy to have mail. I'm a little disappointed with you for having missed so many days during the entire month of October and hope that it won't happen again. Nothing in your letters Inspires any comment on my part, except that it was good to be reassured about Eddie and where the devil do you get that stuff "50-50 chance of your coming home"?? First of all, I wouldn't even let myself think about it, regardless of how sound the foundation may be for the simple reason that I shall believe nothing until I see it, or, more specifically, you, I agree with you on the matter of business instead of a home and someday I will give you all my views on the subject.

My dad got a topcoat, not an overcoat. He has an overcoat to knock around this winter and we felt the topcoat would serve best. And I'd like very much to have us own a car just like George's. He has a coupe that will accommodate six people comfortably, (and not in a rumble seat either). and seven, if necessary. Such a car is easy on gas, too. We shall see - - -

And, of course, I must not overlook your so-called effort at poetry. It's okay with me, even though it doesn't rhyme. Considering your mental status at the time, I think it's pretty good, sweet. And where in h--- did you get the idea that I didn't comment on your last bit of poetry? You should know me better than that! Is there anything I don't comment on??? Silly boy -

The doctor came to examine Diana yesterday, while Goldie's father was here. He gave her an injection to try to rid her of the rash. However, it is still the same and Diana cries pretty steadily, as it seems to itch her. If the rash doesn't clear up soon, Goldie will have to take her to a skin specialist.

I'm "due" again and feel pretty lousy this evening. Rae was here for dinner and is sleeping over. Adele didn't want to go to sleep this evening and by the time I got her upstairs it was too late to bother bathing her. I put her in the crib and left the room. After a few minutes I went in to look at her, She had picked on her gum and made it bleed. Back to the bathroom we went and I put some cotton (soaked in cold water) on the sore spot. Then she had to make a sissy. Finally, when I was just about running out of patience, I threw her into bed and she decided it was time to go to sleep.

And I think it's time I hit the hay, if'n you don't mind, sweet. It's just about 11 and I have a few pieces to wash. I'm hoping my mail will come through more regularly this week. Do you know that Anne had mall from Tony dated Nov. 2nd last week? Just shows you how poorly your mail has been coming through.

Good night, my darling, I love you ever so much and always will be

Darling Eve,
Tonight, on the eve of my furlough, I am CQ. I have a nice, hot coke fire burning, my bunk is ready, I’ve told the operator when to call me, and, generally speaking, I don't have a thing to do but write.

I wish, Sweet, that there had been a letter from you today, so that I could make this a decent length by the useful expedient of answering it, but there wasn't. The solitary letter t received, was from Harry W. telling me what I already knew - that he was shipping out to a “replacement center.” But he would be surprised to know that I knew exactly which replacement center, just two days after he shipped! But I think he'll be even more surprised when I drop in on him day after tomorrow! The only thing now, barring accidents, that might prevent me is the possibility that he may have shipped out before I get there. In that case, I will have had a long train ride (about 170 miles) for no good purpose, However, there is little chance that he will ship out again so soon, so I don't consider that risking too much.

I’ve made a few attempts to find out where Eddie S., is stationed, but so far, without success. I have his address, and you have told me that he is in Wales, but Wales is a big place, and so far, I haven't been able to narrow it down any finer. I'll keep trying, though, 'cause it's “now or never".
Last night, after I wrote to you, I went to the movies with Sgt. Murphy and Klein. The picture was "Ali Baba and the Forty Thieves." Everything about it was childish (especially the dialogue), but it was colorful and "eye-xciting” (if I may coin word) enough to be worth-while. I almost blush to admit that I liked it!
Today, I worked steadily on the Service Records, and managed to get quite a bit done. I'm afraid, though, that there is still plenty to be done - both  on the Service Records and several other items. But I have told Stahle just what is to be done, and he has promised to see to it. So all in all, I am leaving with a clear conscience.
Well, Chippie, wish me luck! I don't have to tell you how eager I am to see both Limey and Eddie—!
And now—a fond good-night, my darling. Here's a kiss for you—and one for the punkin. My love to all.
Your adoring Phil

P.S. May not get to write tomorrow, but I will the next day—promise!
Posted by Marilyn at 11:23 AM