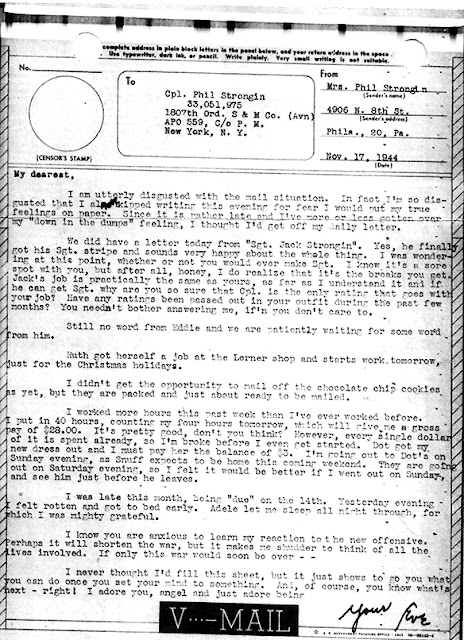 I am utterly disgusted with the mail situation. In fact I'm so disgusted that I also skipped writing this evening for fear I would put my true feelings on paper. Since it is rather late and I’ve more or less gotten over my “down in the dumps” feeling, I thought I'd get off my daily letter.

We did have a letter today from "Sgt. Jack Strongin". Yes, he finally got his Sgt. stripe and sounds very happy about the whole thing. I was wondering at this point, whether or not you would ever make Sgt. I know it's a sore spot with you, but after all, honey, I do realize that it's the breaks you get. Jack's job is practically the same as yours, as far as I understand it and if he can get Sgt. why are you so sure that Cpl. is the only rating that goes with your job? Have any ratings been passed out in your outfit during the past few months! You needn't bother answering me, if’n you don't care to.

Still no word from Eddie and we are patiently waiting for some word from him.

Ruth got herself a job at the Lerner shop and starts work, tomorrow, just for the Christmas holidays.

I didn't get the opportunity to mail off the chocolate as yet, but they are packed and just about ready to be mailed.

I worked more hours this past week than I've ever worked before. I put in 40 hours, counting my four hours tomorrow, which will give me a gross pay of $28.00. It's pretty good, don't you think? However, every single dollar of it is spent already, so I'm broke before I even get started. Dot got my new dress out and I must pay her the balance of $3. I'm going out to Dot's on Sunday evening, as Snuff expects to be home this coming weekend. They are going out on Saturday evening, so I felt it would be better if I went out on Sunday, and see him just before he leaves.

I was late this month, being "due" on the 14th. Yesterday evening I felt rotten and got to bed early. Adele let me sleep all night through, for which I was mighty grateful.

I know you are anxious to learn my reaction to the new offensive,* Perhaps it will shorten the war, but it makes me shudder to think of all the lives involved. If only this war would soon be over - -

I never thought I'd fill this sheet, but it just shows to go you what you can do once you set your mind to something. And, of course, you know what's next - right! I adore you, angel and just adore being