Post #522 - December 2, 1944 I Get Particularly Blue When I Must Dress Up and Go Out Without You and As for V-2, I Can Say That I Wasn’t Too Far Away on the One Occasion When I Heard One Explode and Two Letters from Jack Nerenberg 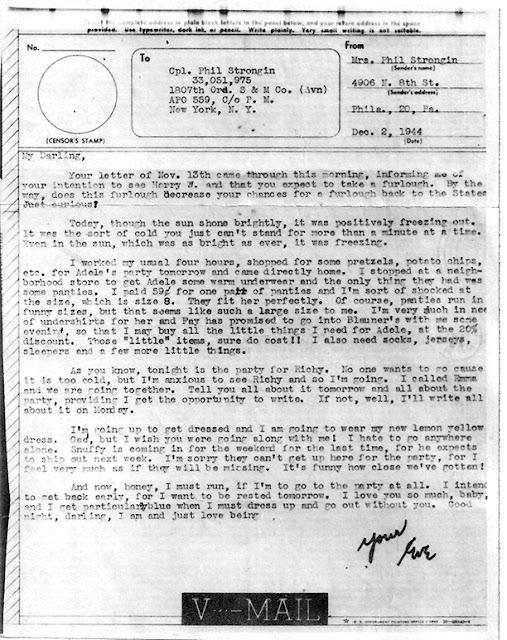 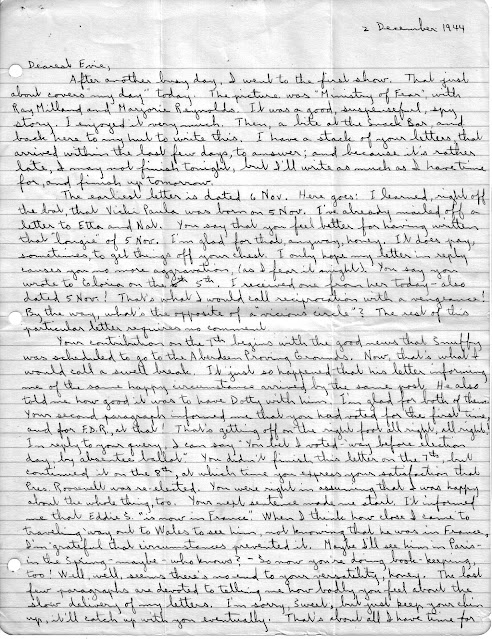 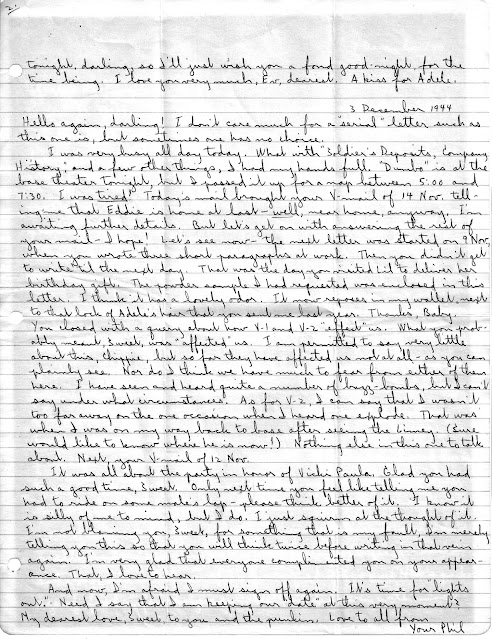 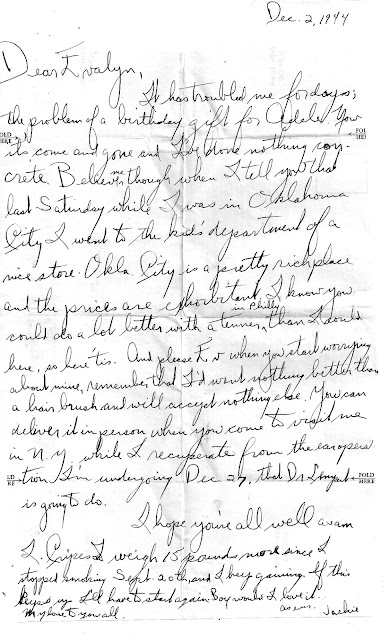 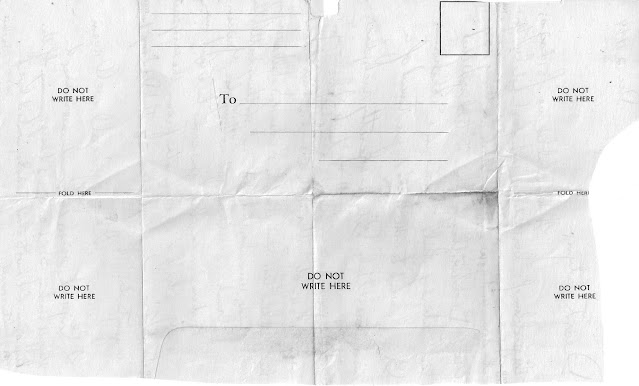 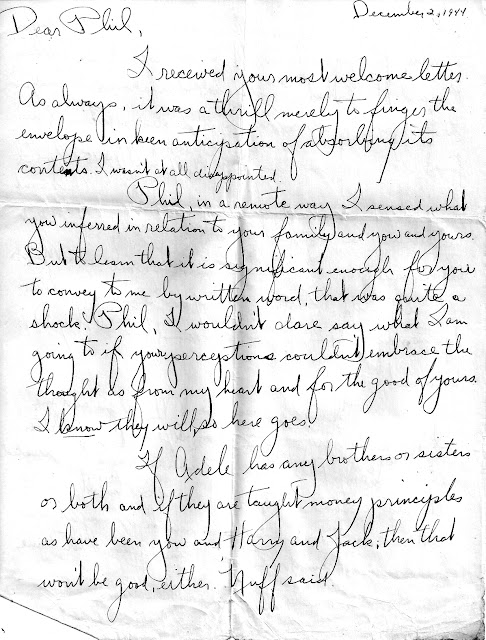 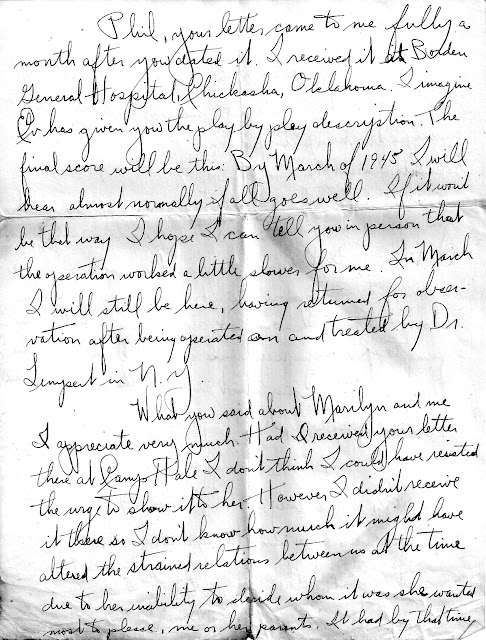 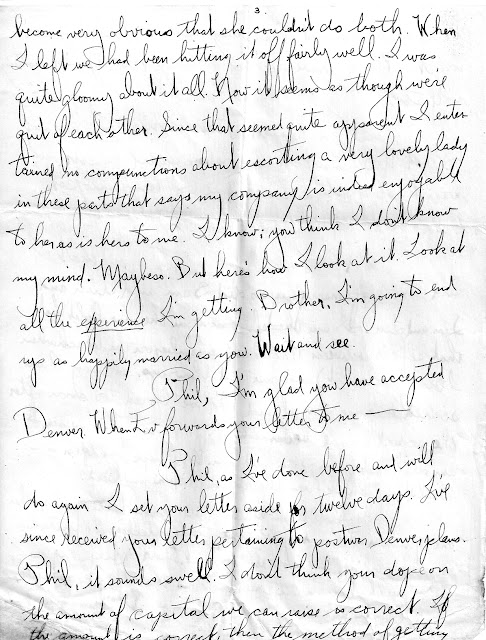 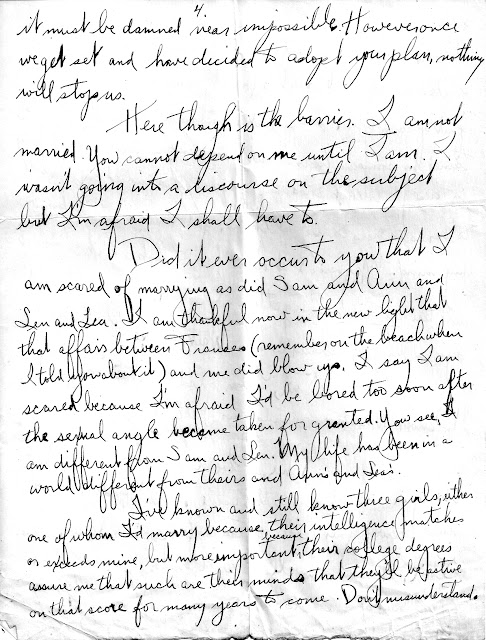 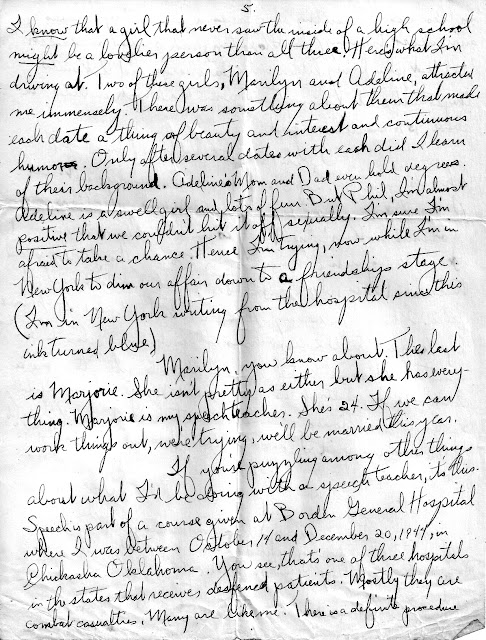 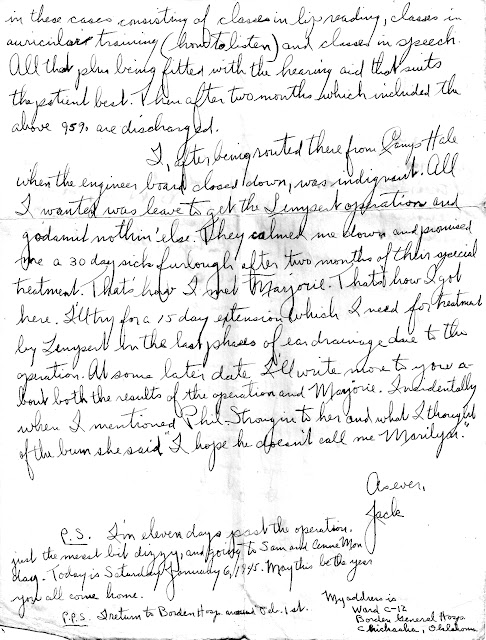 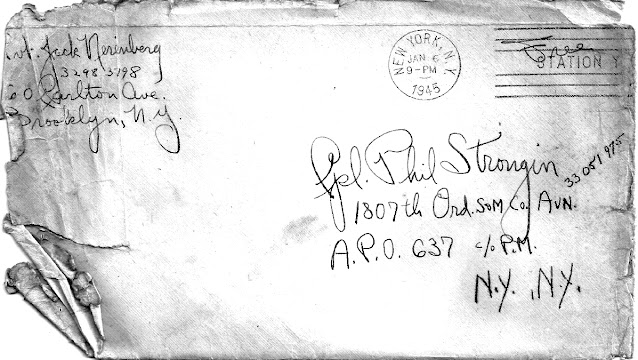 Your letter of Nov. 13th came through this morning, informing me of your intention to see Harry W. and that you expect to take furlough. By the way, does this furlough decrease your chances for a furlough back to the States? Just curious?

Today, though the sun shone brightly, it was positively freezing out. It was the sort of cold you just can't stand for more than a minute at a time. Even in the sun, which was as bright as ever, it was freezing.

I worked my usual four hours, shopped for some pretzels, potato chips, etc. for Adele's party tomorrow and came directly home. I stopped at a neighborhood store to get Adele some warm underwear and the only thing they had was some panties. I paid 59¢ for one pair of panties and I'm sort of shocked at the size, which is size 8. They fit her perfectly. Of course, panties run in funny sizes, but that seems like such a large size to me. I'm very much in need of undershirts for her and Fay has promised to go into Blauner’s with me some evening so that I may buy all the little things I need for Adele, at the 20% discount. Those "little" items, sure do cost!! I also need socks, jerseys, sleepers and a few more little things.

As you know, tonight is the party for Richy. No one wants to go cause it is too cold, but I'm anxious to see Richy and so I'm going. I called Emma and we are going together. Tell you all about it tomorrow and all about the party, providing I get the opportunity to write. If not, well, I'll write all about it on Monday.

I'm going up to get dressed and I am going to wear my new lemon yellow dress. Gee, but I wish you were going along with me! I hate to go anywhere alone. Snuffy is coming in for the weekend for the last time, for he expects to ship out next week. I'm sorry they can't get up here for the party, for I feel very much as if they will be missing. It's funny how close we've gotten!

And now, honey, I must run, if I'm to go to the party at all. I intend to get back early, for I want to be rested tomorrow. I love you so much, baby, and I get particularly blue when I must dress up and go out without you. Good night, darling, I am and just love being

After another busy day, I went to the first show. That just about covers “my day" today. The picture was "Ministry of Fear", with Ray Milland and Marjorie Reynolds. It was a good, suspenseful, spy story. I enjoyed it very much. Then, a bite at the Snack Bar, and back here to my hut to write this. I have a stack of your letters, that arrived within the last few days, to answer; and because it's rather late, I may not finish tonight, but I'll write as much as I have time for, and finish up tomorrow.
The earliest letter is dated 6 Nov. Here goes: I learned, right off the bat, that Vicki Paula was born on 5 Nov. I've already mailed off a letter to Etta and Nat. You say that you feel better for having written that “longie” of 5 Nov. I'm glad for that, anyway, honey. It does pays sometimes, to get things off your chest. I only hope my letter in reply causes you no more aggravation, las I fear it might). You say you wrote to Gloria on the 5th. I received one from her today - also dated 5 Nov.! That's what I would call reciprocation with a vengeance! By the way, what's the opposite of a “vicious circle”? The rest of this particular letter requires no comment.
Your contribution on the 7th begins with the good news that Snuffy was scheduled to go to the Aberdeen Proving Grounds. Now, that's what I would call a swell break. It just so happened that his letter informing me of the same happy circumstance arrived by the same post. He also told me how good it was to have Dotty with him. I am glad for both of them. Your second paragraph informed me that you had voted for the first time, and for F.DR., at that! That's getting off on the right foot all right, all right! In reply to your query, I can say "You bet I voted - way before election day, by absentee ballot.” You didn't finish this letter on the 7th, but continued it on the 8th, at which time you express your satisfaction that Pres. Roosevelt was re-elected. You were right in assuming that I was happy about the whole thing, too. Your next sentence made me start, It informed me that Eddie S. "is now in France.” When I think how close I came to traveling way out to Wales to see him, not knowing that he was in France, I'm grateful that circumstances prevented it. Maybe I'll see him in Paris in the spring - maybe - who knows? - So now you're doing book-keeping, too! Well, well, seems there's no end to your versatility, honey. The last few paragraphs are devoted to telling me how badly you feel about the slow delivery of my letters. I'm sorry, Sweet, but just keep your chin up, it'll catch up with you eventually. That's about all I have time for tonight, darling, so I'll just wish you a fond good night, for the time being. I love you very much, Ev, dearest. A kiss for Adele.
3 December 1944
Hello again, darling! I don't care much for a “serial" letter such as this one is, but sometimes one has no choice.

I was very busy all day today. What with "Soldier's Deposits, Company History, and a few other things, I had my hands full. "Dumbo" is at the base theater tonight, but I passed it up for a nap between 5:00 and 7:30. I was tired! Today's mail brought your V-mail of 14 Nov, telling me that Eddie is home at last - well, near home, anyway, I'm awaiting further details. But let's get on with answering the rest of your mail - I hope! Let's see now - the next letter was started on 9 Nov. when you wrote three short paragraphs at work. Then you didn’t get to write ’til the next day. That was the day you visited Lil to deliver her birthday gift. The powder sample I had requested was enclosed in this letter. I think it has a lovely odor. Il now reposes in my wallet, next to that lock of Adele's hair that you sent me last year. Thanks, Baby. You closed with a query about how V-1 and V-2 "effect" us. What you probably meant, Sweet, was "affected” us. I am permitted to say very little about this, Chippie, but so far they have affected us not at all - as you can plainly see, Nor do I think we have much to fear from either of them here. I have seen and heard quite a number of buzz-bombs, but I can't say under what circumstances. As for V-2, I can say that I wasn't too far away on the one occasion when I heard one explode. That was when I was on my way back to base after seeing the Limey. (Sure would like to know where he is now!) Nothing else in this one to talk about. Next, your V-mail of 12 Nov.

It was all about the party in honor of Vicki Paula. Glad you had such a good time, Sweet, only next time you feel like telling me you had to ride on some male’s lap - please think better of it. I know it is silly of me to mind, but I do. I just squirm at the thought of it. I’m not blaming you, Sweet, for something that is my fault, I’m merely telling you this so that you will think twice before writing in that vein again. I'm very glad that everyone complimented you on your appearance. That, I love to hear.

And now, I'm afraid I must sign off again. It's time for “lights out,” Need I say that I am keeping our “date” at this very moment? My dearest love, Sweet, to you and the punkin. Love to all from