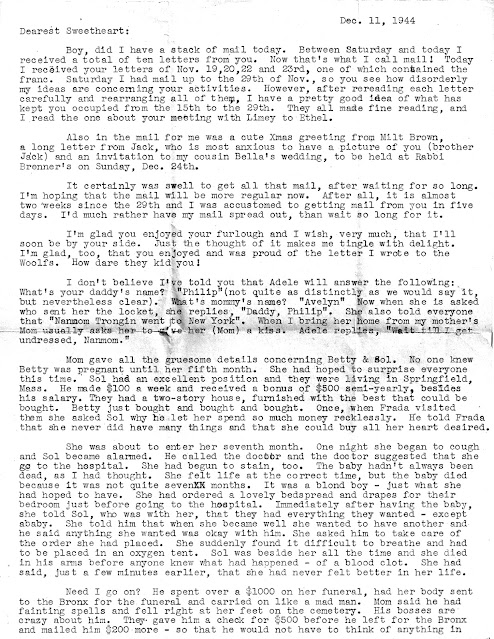 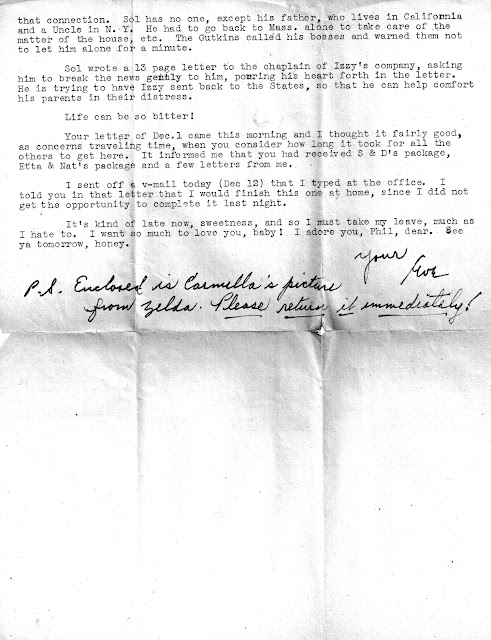 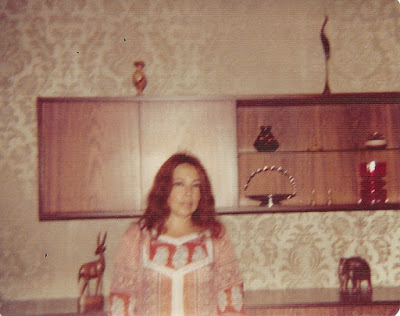 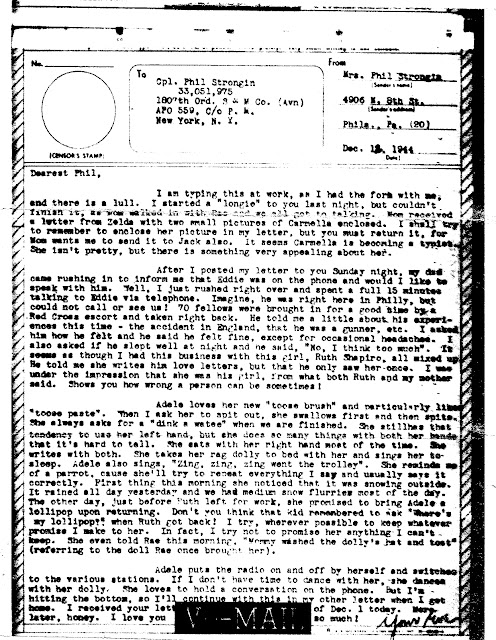 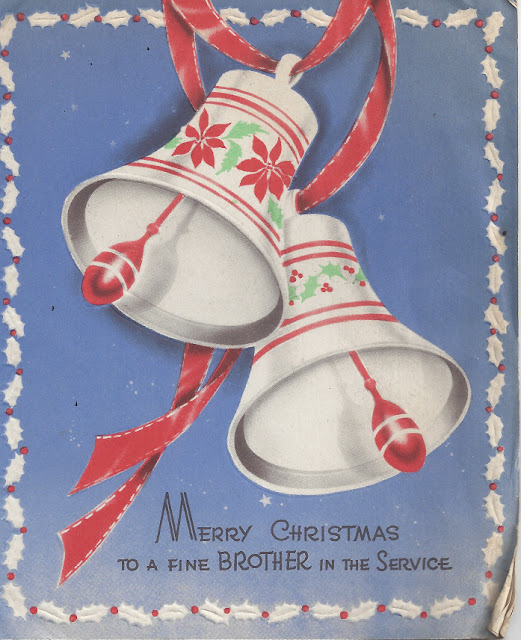 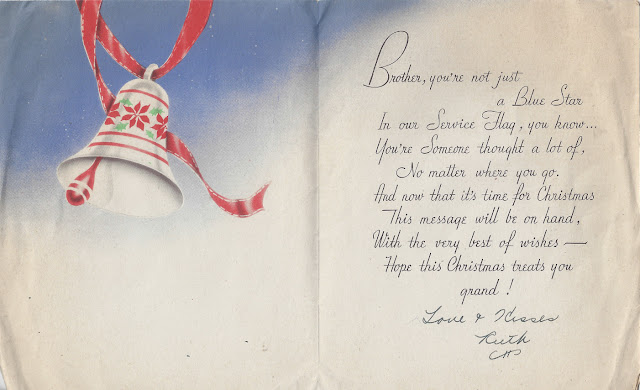 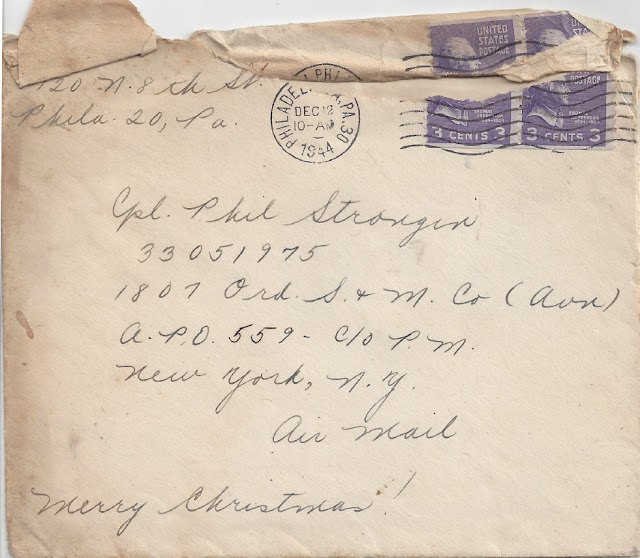 Boy, did I have a stack of mail today. Between Saturday and today I received a total of ten letters from you. Now that's what I call mail! Today I received your letters of Nov. 19, 20, 22 and 23rd, one of which contained the franc. Saturday I had mail up to the 29th of Nov., so you see how disorderly my ideas are concerning your activities. However, after rereading each letter carefully and rearranging all of them, I have a pretty good idea of what has kept you occupied from the 15th to the 29th. They all made fine reading, and I read the one about your meeting with Limey to Ethel.

Also in the mail for me was a cute Xmas greeting from Milt Brown, a long letter from Jack, who is most anxious to have a picture of you (brother Jack) and an invitation to my cousin Bella's wedding, to be held at Rabbi Brenner's on Sunday, Dec. 24th.

It certainly was swell to get all that mail, after waiting for so long. I'm hoping that the mail will be more regular now. After all, it is almost two weeks since the 29th and I was accustomed to getting mail from you in five days. I'd much rather have my mail spread out, than wait so long for it.

I'm glad you enjoyed your furlough and I wish, very much, that I'll soon be by your side. Just the thought of it makes me tingle with delight. I'm glad, too, that you enjoyed and was proud of the letter I wrote to the Woolfs. How dare they kid you!

I don't believe I've told you that Adele will answer the following: What's your daddy's name? "Philip" (not quite as distinctly as we would say it, but nevertheless clear). What's mommy's name? "Avelyn" Now when she is asked who sent her the locket, she replies, "Daddy, Philip". She also told everyone that "Nannom Trongin went to New York". When I bring her home from my mother's Mom usually asks her to give her (Mom) a kiss. Adele replies, “Wait till I get. undressed, Nanmom."

Mom gave all the gruesome details concerning Betty & Sol. No one knew Betty was pregnant until her fifth month. She had hoped to surprise everyone this time. Sol had an excellent position and they were living in Springfield, Mass. He made $100 a week and received a bonus of $500 semi-yearly, besides his salary. They had a two-story house, furnished with the best that could be bought. Betty just bought and bought and bought. Once, when Frada visited them she asked Sol why he let her spend so much money recklessly. He told Frada that she never did have many things and that she could buy all her heart desired.

She was about to enter her seventh month. One night she began to cough and Sol became alarmed. He called the doctor and the doctor suggested that she go to the hospital. She had begun to stain, too. The baby hadn't always been dead, as I had thought. She felt life at the correct time, but the baby died because it was not quite seven months. It was a blond boy - just what she had hoped to have. She had ordered a lovely bedspread and drapes for their bedroom just before going to the hospital. Immediately after having the baby, she told Sol, who was with her, that they had everything they wanted - except a baby. She told him that when she became well she wanted to have another and he said anything she wanted was okay with him. She asked him to take care of the order she had placed. She suddenly found it difficult to breathe and had to be placed in an oxygen tent. Sol was beside her all the time and she died in his arms before anyone knew what had happened - of a blood clot. She had said, just a few minutes earlier, that she had never felt better in her life.

Need I go on? He spent over a $1000 on her funeral, had her body sent to the Bronx for the funeral and carried on like a mad man. Mom said he had fainting spells and fell right at her feet on the cemetery. His bosses are crazy about him. They gave him a check for $500 before he left for the Bronx and mailed him $200. more - so that he would not have to think of anything in that connection. Sol has no one, except his father, who lives in California and an Uncle in N.Y. He had to go back to Mass. alone to take care of the matter of the house, etc. The Gutkins called his bosses and warned them not to let him alone for a minute.

Sol wrote a 13 page letter to the chaplain of Izzy's company, asking him to break the news gently to him, pouring his heart forth in the letter. He is trying to have Izzy sent back to the States, so that he can help comfort his parents in their distress.
Life can be so bitter!

Your letter of Dec.1 came this morning and I thought it fairly good as concerns traveling time, when you consider how long it took for all the others to get here. It informed me that you had received S & D’s package, Etta & Nat's package and a few letters from me.

I sent off a v-mail today (Dec 12) that I typed at the office. I told you in that letter that I would finish this one at home, since I did not get the opportunity to complete it last night.

It's kind of late now, sweetness, and so I must take my leave, much as I hate to. I want so much to love you, baby! I adore you, Phil, dear. See ya tomorrow, honey.

I am typing this at work, as I had the form with me and there is a lull. I started a "longie" to you last night, but couldn't finish it, as Mom walked in with Rae and we all got to talking. Mom received a letter from Zelda with two small pictures of Carmella enclosed. I shall try to remember to enclose her picture in my letter, but you must return it, for Mom wants me to send it to Jack also. It seems Carmella is becoming a typist. She isn't pretty, but there is something very appealing about her.

After I posted my letter to you Sunday night, my dad came rushing in to inform me that Eddie was on the phone and would I like to speak with him. Well, I just rushed right over and spent a full 15 minutes talking to Eddie via telephone. Imagine, he was right here in Philly, but could not call or see us! 70 fellows were brought in for a good time by a Red Cross escort and taken right back. He told me a little about his experiences this time - the accident in England, that he was a gunner, etc. I asked him how he felt and he said he felt fine, except for occasional headaches. I also asked if he slept well at night and he said, "No, I think too much”. It seems as though I had this business with this girl, Ruth Shapiro, all mixed up. He told me she writes him love letters, but that he only saw her once. I was under the impression that she was his girl, from what both Ruth and my mother said. Shows you how wrong a person can be sometimes!

Adele loves her new “toose brush” and particularly *toose paste”. When I ask her to spit out, she swallows first and then spits. She always asks for a “dink of watee” when we are finished. She still has that tendency to use her left hand, but she does so many things with both her hands that it’s hard to tell. She eats with her right hand most of the time. She writes with both. She takes her rag dolly to bed with her and sings her to sleep. Adele also sings, *Zing, zing, zing went the trolley". She reminds me of a parrot, cause she'll try to repeat everything I say and usually says it correctly. First thing this morning she noticed that it was snowing outside. It rained all day yesterday and we had medium snow flurries most of the day. The other day, just before Ruth left for work, she promised to bring Adele a lollipop upon returning. Don't you think that kid remembered to ask “Where’s my lollipop?” when Ruth got back! I try, wherever possible to keep whatever promise I make to her. In fact, I try not to promise her anything I can’t keep. She even told Rae this morning. "Mommy washed the dolly’s hat and toat” (referring to the doll Rae once brought her).

Adele puts the radio on and off by herself and switches to the various stations. If I don't have time to dance with her, she dances with her dolly. She loves to hold a conversation on the phone. But I’m hitting the bottom, so I'll continue with this in my other letter when I get home. I received your letter of Dec. 1 today. More later, honey. I love you so much!
Your Eve
Posted by Marilyn at 9:15 AM