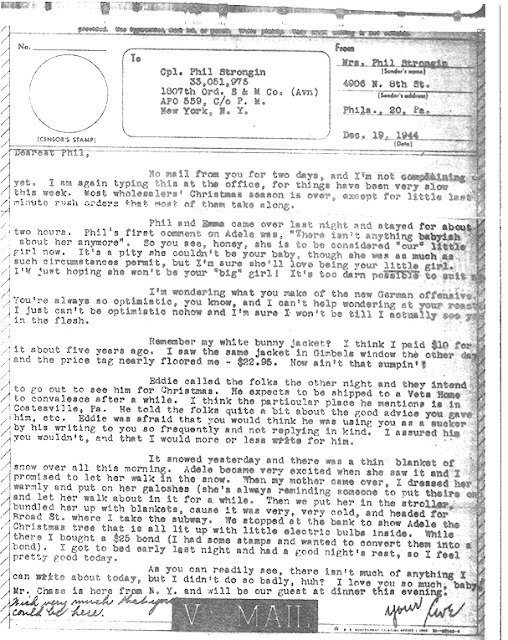 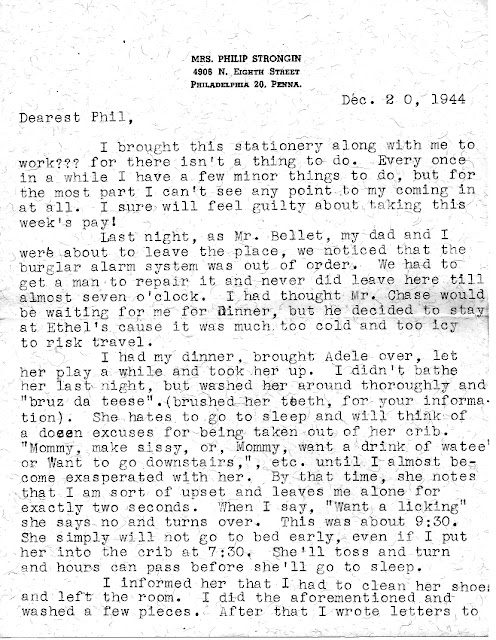 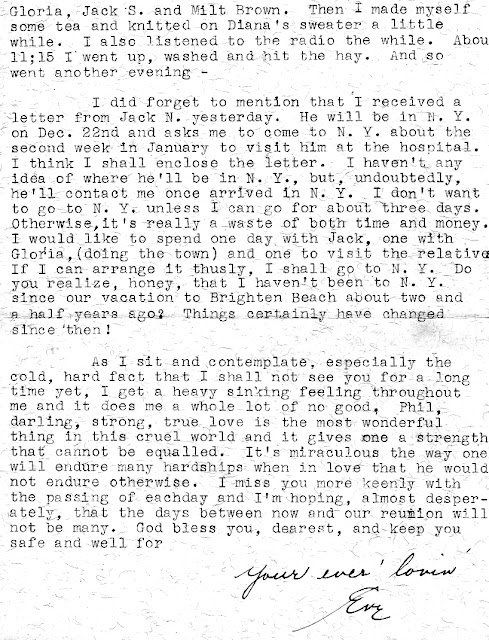 No mail from you for two days, and I'm not complaining yet. I am again typing this at the office, for things have been very slow this week. Most wholesalers’ Christmas season is over, except for little last minute rush orders that most of them take along.

Phil and Emma came over last night and stayed for about two hours. Phil's first comment on Adele was, *There isn't anything babyish about her anymore". So you see, honey, she is to be considered “our” little girl now. It's a pity she couldn't be your baby, though she was as much as such circumstances permit, but I'm sure she’ll love being your little girl. I'm just hoping she won't be your “big" girl! It's too damn possible to suit me.

I'm wondering what you make of the new German offensive. You're always so optimistic, you know, and I can't help wondering at your reaction. I just can't be optimistic nohow and I'm sure I won't be till I actually see you in the flesh.

Remember my white bunny jacket? I think I paid $10 for it about five years ago. I saw the same jacket in Gimbels window the other day and the price tag nearly floored me - $22.95. Now ain’t that sumpin’?

Eddie called the folks the other night and they intend to go out to see him for Christmas. He expects to be shipped to a Vets Home to convalesce after a while. I think the particular place he mentioned is in Coatesville, Pa. He told the folks quite a bit about the good advice you gave him, etc. Eddie was afraid that you would think he was using you as a sucker by his writing to you so frequently and not replying In kind. I assured him you wouldn't, and that I would more or less write for him.

It snowed yesterday and there was a thin blanket of snow over all this morning. Adele became very excited when she saw it and I promised to let her walk in the snow. When my mother came over, I dressed her warmly and put on her galoshes (she's always reminding someone to put theirs on) and let her walk about in it for a while. Then we put her in the stroller, bundled her up with blankets, cause it was very, very cold, and headed for Broad St. where I take the subway. We stopped at the bank to show Adele the Christmas tree that is all lit up with little electric bulbs inside. While there I bought a $25 bond (I had some stamps and wanted to convert them into a bond). I got to bed early last night and had a good night's rest. So I feel pretty good today.

As you can readily see, there isn't much of anything I can write about today, but I didn't do so badly, huh? I love you so much, baby! Mr. Chase is here from N.Y. and will be our guest at dinner this evening. Wish very much that you could be here.
Your Eve
Dec. 20, 1944

I brought this stationery along with me to work??? for there isn't a thing to do. Every once in a while I have a few minor things to do, but for the most part I can't see any point to my coming in at all. I sure will feel guilty about taking this week's pay!

Last night, as Mr. Bellet, my dad and I were about to leave the place, we noticed that the burglar alarm system was out of order. We had to get a man to repair it and never did leave here till almost seven o'clock. I had thought Mr. Chase would be waiting for me for dinner, but he decided to stay at Ethel's cause it was much too cold and too icy to risk travel,

I had my dinner, brought Adele over, let her play a while and took her up. I didn't bathe her last night, but washed her around thoroughly and "bruz da teese". (brushed her teeth, for your information). She hates to go to sleep and will think of a dozen excuses for being taken out of her crib. *Mommy, make sissy, or, Mommy, want a drink of watee or want to go downstairs," etc. until I almost become exasperated with her. By that time, she notes that I am sort of upset and leaves me alone for exactly two seconds. When I say, "Want a licking" she says no and turns over. This was about 9:30. She simply will not go to bed early, even if I put her into the crib at 7:30. She’ll toss and turn and hours can pass before she'll go to sleep.
I informed her that I had to clean her shoes and left the room. I did the aforementioned and washed a few pieces. After that I wrote letters to Gloria, Jack S. and Milt Brown. Then I made myself some tea and knitted on Diana's sweater a little while. I also listened to the radio the while. About 11:15, I went up, washed and hit the hay. And so went another evening -

I did forget to mention that I received a letter from Jack N. yesterday. He will be in N.Y. on Dec. 22nd and asks me to come to N.Y. about the second week in January to visit him at the hospital. I think I shall enclose the letter. I haven't any idea of where he'll be in N.Y., but, undoubtedly, he'll contact me once arrived in N.Y. I don't want to go to N. Y. unless I can go for about three days. Otherwise, it's really a waste of both time and money. I would like to spend one day with Jack, one with Gloria, (doing the town) and one to visit the relatives. If I can arrange it thusly, I shall go to N.Y. Do you realize, honey, that I haven't been to N. Y. since our vacation to Brighten Beach about two and a half years ago? Things certainly have changed since then!

As I sit and contemplate, especially the cold, hard fact that I shall not see you for a long time yet, I get a heavy sinking feeling throughout me and it does me a whole lot of no good, Phil, darling, strong, true love is the most wonderful thing in this cruel world and it gives one a strength that cannot be equalled. It's miraculous the way one will endure many hardships when in love that he would not endure otherwise. I miss you more keenly with the passing of each day and I'm hoping, almost desperately, that the days between now and our reunion will not be many. God bless you, dearest, and keep you safe and well for

Your ever lovin’
Eve
Posted by Marilyn at 5:53 PM