Post #532 - December 18, 1944 Most of the Boards Were Checking on Their Men Between the Ages of 26 and 27 and My Failure to Send Gifts Home This Year was Due to the Fact that I Had No Money Available 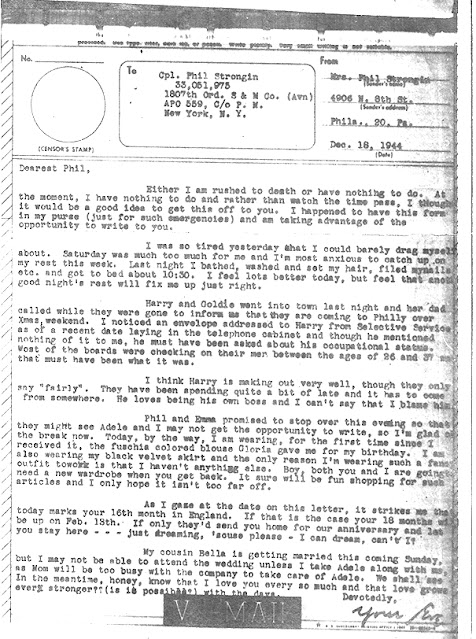 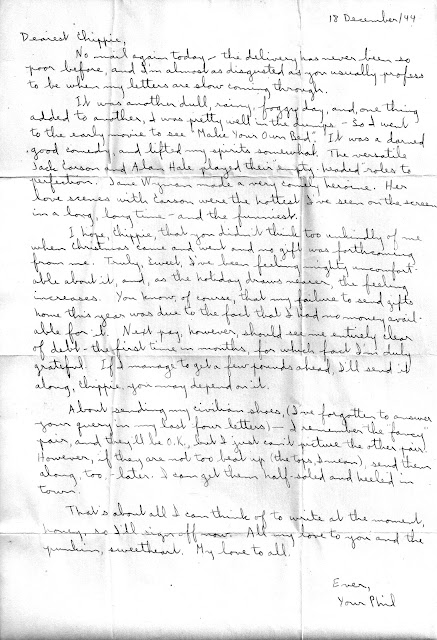 Either I am rushed to death or have nothing to do. At the moment, I have nothing to do and rather than watch the time pass, I thought it would be a good idea to get this off to you. I happened to have this form in my purse (just for such emergencies) and am taking advantage of the opportunity to write to you.

I was so tired yesterday that I could barely drag myself about. Saturday was much too much for me and I'm most anxious to catch up on my rest this week. Last night I bathed, washed and set my hair, filed my nails, etc. and got to bed about 10:50. I feel lots better today, but feel that another good night's rest will fix me up just right.

Harry and Goldie went into town last night and her dad called while they were gone to inform us that they are coming to Philly over Xmas weekend. I noticed an envelope addressed to Harry from Selective Service as of a recent date laying in the telephone cabinet and though he mentioned nothing of it to me, he must have been asked about his occupational status. Most of the boards were checking on their men between the ages of 26 and 27 and that must have been what it was.

I think Harry is making out very well, though they only say "fairly.” They have been spending quite a bit of late and it has to come from somewhere. He loves being his own boss and I can't say that I blame him.

Phil and Emma promised to stop over this evening so they might see Adele and I may not get the opportunity to write, so I'm glad of the break now. Today, by the way, I am wearing, for the first time since I received it, the fuschia colored blouse Gloria gave me for my birthday. I am also wearing my black velvet skirt and the only reason I'm wearing such a fancy outfit to work is that I haven't anything else. Boy, both you and I are going to need a new wardrobe when you get back. It sure will be fun shopping for such articles and I only hope it isn't too far off.

As I gaze at the date on this letter, it strikes me that today marks your 16th month in England. If that is the case your 18 months will be up on Feb. 18th. If only they'd send you home for our anniversary and let you stay here - - - just dreaming, ’scuse please - I can dream, can’t I?

My cousin Bella is getting married this coming Sunday, but I may not be able to attend the wedding unless I take Adele along with me, as Mom will be too busy with the company to take care of Adele. We shall see. In the meantime, honey, know that I love you ever so much and that love grows ever stronger? (is it possible?) with the days.

No mail again today—the delivery has never been so poor before, and I'm almost as disgusted as you usually profess to be when my letters are slow coming through,

It was another dull, rainy, foggy day, and, one thing added to another, I was pretty well in the dumps - So I went to the early movie to see “Make Your Own Bed." It was a darned good comedy, and lifted my spirits somewhat. The versatile Jack Carson and Alan Hale played their “empty-headed” roles to perfection. Jane Wyman made a very comely heroine. Her love scenes with Carson were the hottest I've seen on the screen in a long, long time – and the funniest.

I hope, Chippie, that you didn't think too unkindly of me when Christmas came and went and no gift was forthcoming from me. Truly, Sweet, I've been feeling mighty uncomfortable about it, and, as the holiday draws nearer, the feeling increases. You know, of course, that my failure to send gifts home this year was due to the fact that I had no money available for it. Next pay, however, should see me entirely clear of debt - the first time in months, for which fact I’m duly grateful. If I manage to get a few pounds ahead, I’ll send it along, Chippie, you may depend on it.

About sending my civilian shoes, (I've forgotten to answer your query in my last four letters) I remember the “fancy” pair, and they'll be O.K., but I just can’t picture the other pair. However, if they are not too beat up (the tops, I mean) send them along, too, - later. I can get them half-soled and heeled in town.

That's about all I can think of to write at the moment, honey, so I'll sign off now. All my love to you and the punkin, sweetheart. My love to all,

Ever,
Your Phil
Posted by Marilyn at 8:47 AM