Post #531 - December 17, 1944 If It Were Anyone Else I Doubt Very Much That the Person Would Have Lived and I Still Feel Myself a Pretty Fortunate G.I. 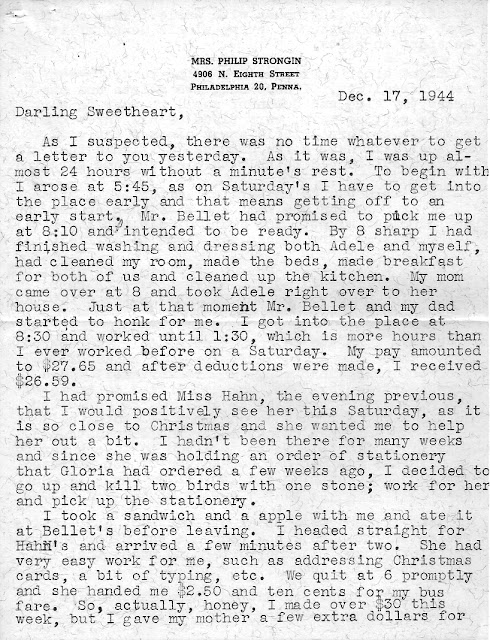 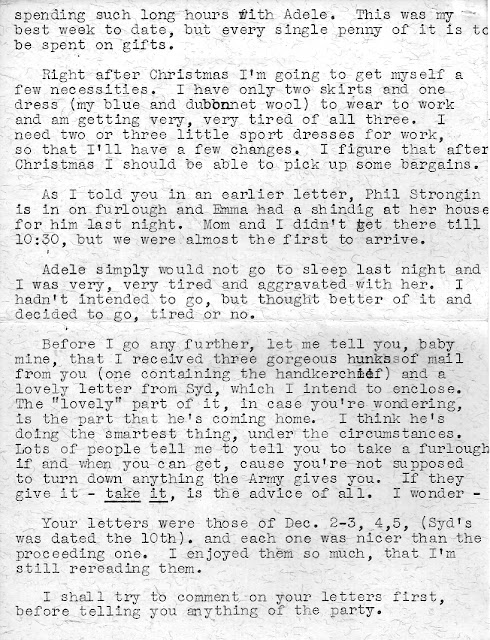 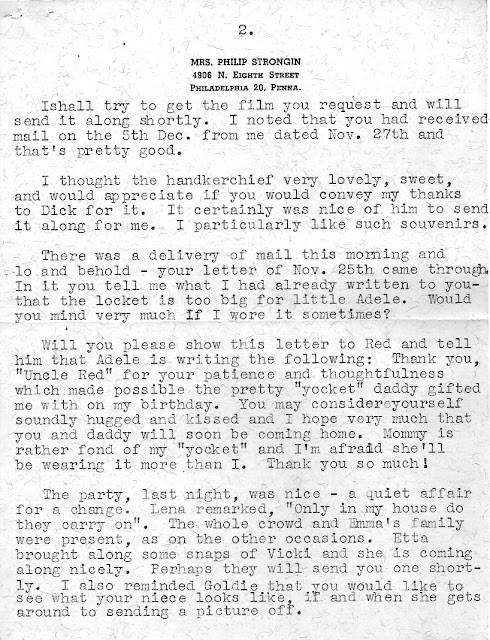 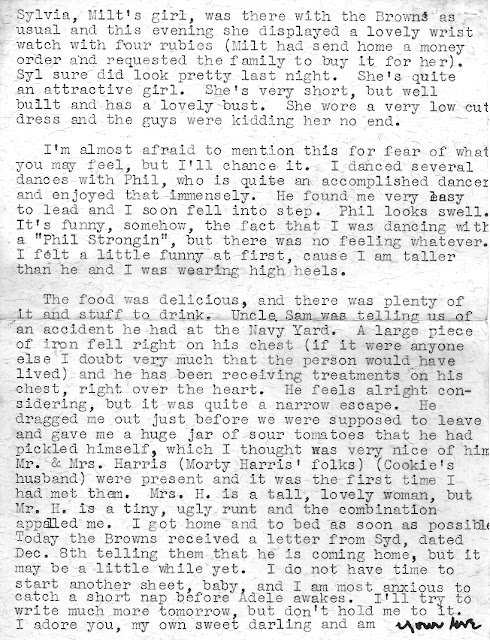 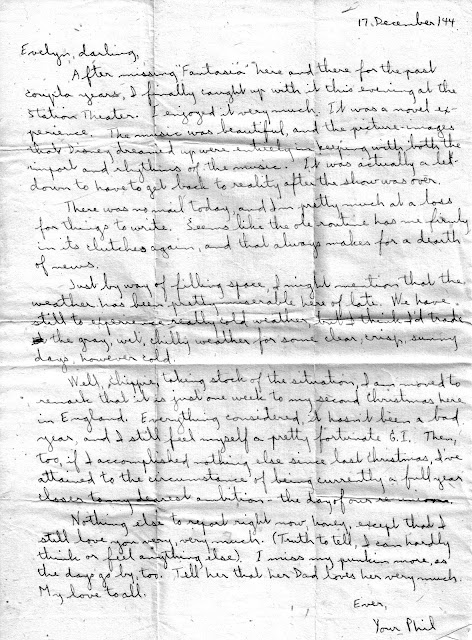 As I suspected, there was no time whatever to get a letter to you yesterday. As it was, I was up almost 24 hours without a minute's rest. To begin with I arose at 5:45, as on Saturdays I have to get into the place early and that means getting off to an early start. Mr. Bellet had promised to pick me up at 8:10 and I intended to be ready. By 8 sharp I had finished washing and dressing both Adele and myself, had cleaned my room, made the beds, made breakfast for both of us and cleaned up the kitchen. My mom came over at 8 and took Adele right over to her house. Just at that moment Mr. Bellet and my dad started to honk for me. I got into the place at 8:30 and worked until 1:30, which is more hours than I ever worked before on a Saturday. My pay amounted to $27.65 and after deductions were made, I received $26.59.

I had promised Miss Hahn, the evening previous, that I would positively see her this Saturday, as it is so close to Christmas and she wanted me to help her out a bit. I hadn't been there for many weeks and since she was holding an order of stationery that Gloria had ordered a few weeks ago, I decided to go up and kill two birds with one stone; work for her and pick up the stationery.

I took a sandwich and an apple with me and ate it at Bellet's before leaving. I headed straight for Hahn's and arrived a few minutes after two. She had very easy work for me, such as addressing Christmas cards, a bit of typing, etc. We quit at 6 promptly and she handed me $2.50 and ten cents for my bus fare. So, actually, honey, I made over $30 this week, but I gave my mother a few extra dollars for spending such long hours with Adele. This was my best week to date, but every single penny of it is to be spent on gifts.

Right after Christmas I'm going to get myself a few necessities. I have only two skirts and one dress (my blue and dubbonet wool) to wear to work and am getting very, very tired of all three. I need two or three little sport dresses for work, so that I'll have a few changes. I figure that after Christmas I should be able to pick up some bargains.

As I told you in an earlier letter, Phil Strongin is in on furlough and Emma had a shindig at her house for him last night. Mom and I didn't get there till 10:30, but we were almost the first to arrive.

Adele simply would not go to sleep last night and I was very, very tired and aggravated with her. I hadn't intended to go, but thought better of it and decided to go, tired or no.

Before I go any further, let me tell you, baby mine, that I received three gorgeous hunks of mail from you (one containing the handkerchief) and a lovely letter from Syd, which I intend to enclose. The "lovely" part of it, in case you're wondering, is the part that he's coming home. I think he's doing the smartest thing, under the circumstances. Lots of people tell me to tell you to take a furlough if and when you can get, cause you're not supposed to turn down anything the Army gives you. If they give it - take it, is the advice of all. I wonder -

Your letters were those of Dec. 2-3, 4,5, (Syd's was dated the 10th). and each one was nicer than the proceeding one. I enjoyed them so much, that I'm still rereading them.

I shall try to comment on your letters first, before telling you anything of the party.

I shall try to get the film you request and will send it along shortly. I noted that you had received mail on the 5th Dec. from me dated Nov. 27th and that's pretty good.

I thought the handkerchief very lovely, sweet, and would appreciate if you would convey my thanks to Dick for it. It certainly was nice of him to send it along for me. I particularly like such souvenirs.

There was a delivery of mail this morning and lo and behold - your letter of Nov. 25th came through. In it you tell me what I had already written to you that the locket is too big for little Adele. Would you mind very much I wore it sometimes?

Will you please show this letter to Red and tell him that Adele is writing the following: Thank you, "Uncle Red" for your patience and thoughtfulness which made possible the pretty "yocket" daddy gifted me with on my birthday. You may consider yourself soundly hugged and kissed and I hope very much that you and daddy will soon be coming home. Mommy is rather fond of my "yocket" and I'm afraid she'll be wearing it more than I. Thank you so much!

The party, last night, was nice - a quiet affair for a change. Lena remarked, "Only in my house do they carry on". The whole crowd and Emma's family were present, as on the other occasions. Etta brought along some snaps of Vicki and she is coming along nicely. Perhaps they will send you one shortly. I also reminded Goldie that you would like to see what your niece looks like, if and when she gets around to sending a picture off.

Sylvia, Milt's girl, was there with the Browns as usual and this evening she displayed a lovely wrist watch with four rubies (Milt had sent home a money order and requested the family to buy it for her). Syl sure did look pretty last night. She's quite an attractive girl. She's very short, but well built and has a lovely bust. She wore a very low cut dress and the guys were kidding her no end.

I'm almost afraid to mention this for fear of what you may feel, but I'll chance it. I danced several dances with Phil, who is quite an accomplished dancer and enjoyed that immensely. He found me very easy to lead and I soon fell into step. Phil looks swell. It's funny, somehow, the fact that I was dancing with a "Phil Strongin", but there was no feeling whatever. I felt a little funny at first, cause I am taller than he and I was wearing high heels.

The food was delicious, and there was plenty of it and stuff to drink. Uncle Sam was telling us of an accident he had at the Navy Yard. A large piece of iron fell right on his chest (if it were anyone else I doubt very much that the person would have lived), and he has been receiving treatments on his chest, right over the heart. He feels alright considering, but it was quite a narrow escape. He dragged me out just before we were supposed to leave and gave me a huge jar of sour tomatoes that he had pickled himself, which I thought was very nice of him. Mr. & Mrs. Harris (Morty Harris' folks) (Cookie's husband) were present and it was the first time I had met them. Mrs. H. is a tall, lovely woman, but Mr. H. is a tiny, ugly runt and the combination appalled me. I got home and to bed as soon as possible Today the Browns received a letter from Syd, dated Dec. 8th telling them that he is coming home, but it may be a little while yet. I do not have time to start another sheet, baby, and I am most anxious to catch a short nap before Adele awakes. I'll try to write much more tomorrow, but don't hold me to it. I adore you, my own sweet darling and am
Your Eve

After missing “Fantasia” here and there for the past years, I finally caught up with it this evening at the Station Theater. I enjoyed it very much. It was a novel experience. The music was beautiful, and the picture-images that Disney dreamed up were entirely in keeping with both the  import and rhythms of the music. It was actually a let-down to have to get back to reality after the show was over.

There was no mail today, and I’m pretty much at a loss for things to write. Seems like the ole routine has me firmly in its clutches again, and that always makes for a dearth of news.
Just by way of filling space, I might mention that the weather has been pretty miserable here of late. We have still to experience really cold weather, but I think I’d trade the gray, wet, chilly weather for some clear, crisp, sunny days, however cold.
Well, Chippie, taking stock of the situation, I am moved to remark that it is just one week to my second Christmas here in England. Everything considered, it hasn’t been a bad year, and I still feel myself a pretty fortunate G.I. Then, too, if I accomplished nothing else since last Christmas, I’ve attained to the circumstance of being currently a full year closer to my dearest ambition - the day of our reunion.

Nothing else to report right now, honey, except that t still love you very, very much. (Truth to tell, I can hardly think or feel anything else). I miss my punkin more, as the days go by, too. Tell her that her Dad loves her very much. My love to all.

Ever,
Your Phil
Posted by Marilyn at 8:52 AM