Post #530 - December 15, 1944 My Brother Eddie Called Yesterday and Told the Folks to Come Up to See Him Christmas and We Either Make the Break Shortly After I Get Back—Or Never! 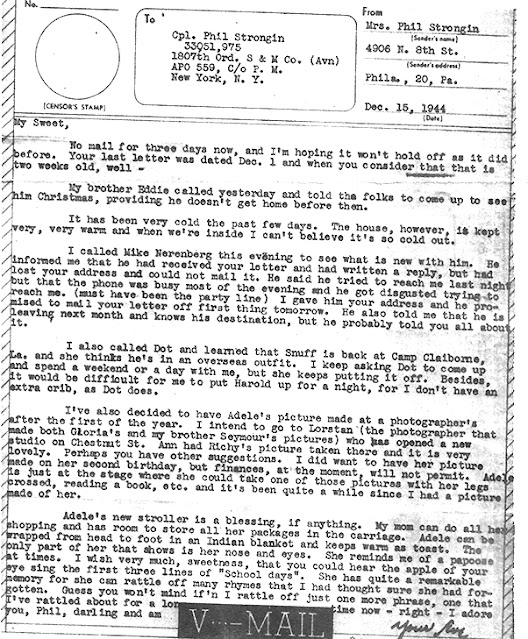 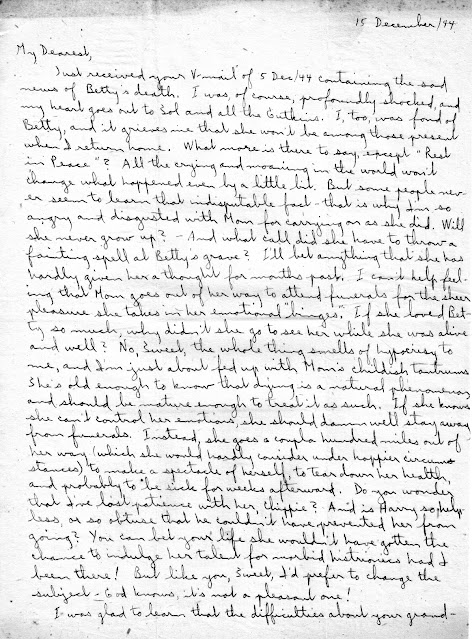 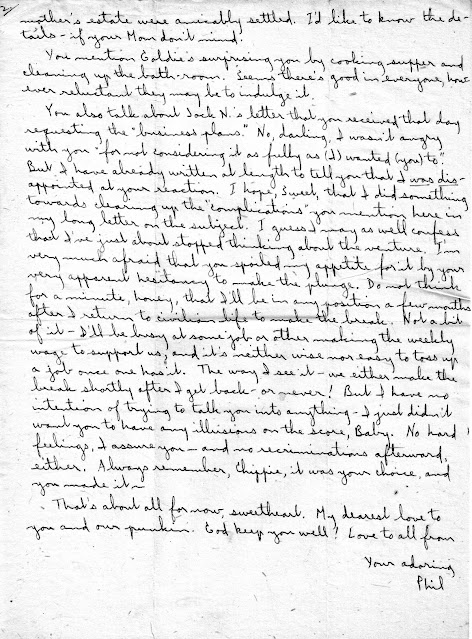 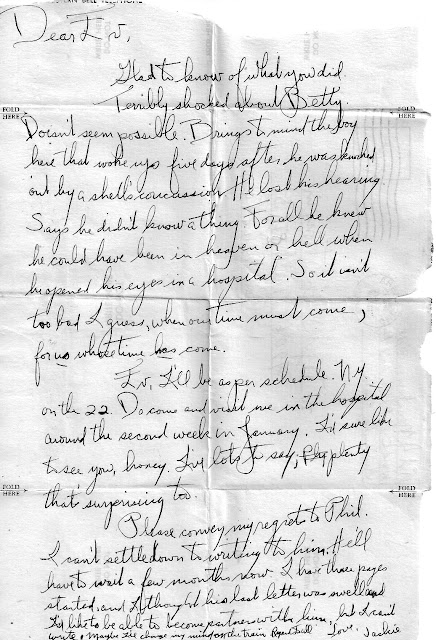 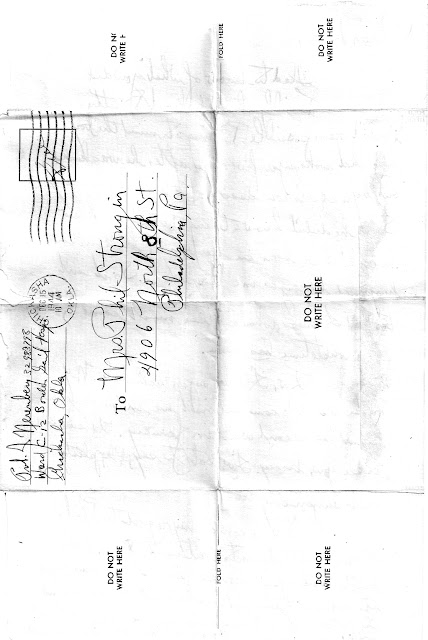 No mail for three days now, and I'm hoping it won't hold off as it did before. Your last letter was dated Dec. 1 and when you consider that that is two weeks old, well—

My brother Eddie called yesterday and told the folks to come up to see him Christmas, providing he doesn't get home before then.

It has been very cold the past few days. The house, however, is kept very, very warm and when we're inside I can't believe it's so cold out.

I called Mike Nerenberg this evening to see what is new with him. He informed me that he had received your letter and had written a reply, but had lost your address and could not mail it. He said he tried to reach me last night but that the phone was busy most of the evening and he got disgusted trying to reach me. (must have been the party line) I gave him your address and he promised to mail your letter off first thing tomorrow. He also told me that he is leaving next month and knows his destination, but he probably told you all about it.

I also called Dot and learned that Snuff is back at Camp Claiborne, La. and she thinks he is in an overseas outfit. I keep asking Dot to come up and spend a weekend or a day with me, but she keeps putting it off. Besides, it would be difficult for me to put Harold up for a night, for I don't have an extra crib, as Dot does.

I’ve also decided to have Adele's picture made at a photographer's after the first of the year. I intend to go to Lorsten (the photographer that made both Gloria's and my brother Seymour's pictures) who has opened a new studio on Chestnut St. Ann had Richy’s picture taken there and it is very lovely. Perhaps you have other suggestions. I did want to have her picture made on her second birthday, but finances, at the moment, will not permit. Adele is just at the stage where she could take one of those pictures with her legs crossed, reading a book, etc. and it's been quite a while since I had a picture made of her.

Adele's new stroller is a blessing, if anything. My mom can do all her shopping and has room to store all her packages in the carriage. Adele can be wrapped from head to foot in an Indian blanket and keeps warm as toast. The only part of her that shows is her nose and eyes. She reminds me of a papoose at times. I wish very much, sweetness, that you could hear the apple of your eye sing the first three lines of "School days". She has quite a remarkable memory for she can rattle off many rhymes that I had thought sure she had forgotten. Guess you won't mind if’n I rattle off just one more phrase, one that I've rattled about for a long time now - right - I adore you, Phil, darling and am
Your Eve

Just received your mail of 5 Dec/44 containing the sad news of Betty's death. I was, of course, profoundly shocked, and my heart goes out to Sol and all the Gutkins. I too, was fond of Betty, and it grieves me that she won't be among those present when I return home. What more is there to say, except "Rest in Peace"? All the crying and moaning in the world won't change what happened even by a little bit. But some people never seem to learn that indisputable fact - that is why I’m so angry and disgusted with Mom for carrying on as she did. Will she never grow up? - And what call did she have to throw a fainting spell at Betty's grave? I'll bet anything that she has hardly even  given her a thought for months past. I can't help feeling that Mom goes out of her way to attend funerals for the sheer pleasure she takes in her emotional "binges.” If she loved Betty so much, why didn't she go to see her while she was alive and well? No Sweet, the whole thing smells of hypocrisy to me, and I'm just about fed up with Mom's childish tantrums. She's old enough to know that dying is a natural phenomenon, and should be mature enough to treat it as such. If she knows she can't control her emotions, she should damn well stay away from funerals. Instead, she goes a coupla hundred miles out on her way (which she would hardly consider under happier circumstances to make a spectacle of herself, to tear down her health and probably to be sick for weeks afterward. Do you wonder that I’ve lost patience with her, Chippie? And is Harry so helpless, or so obtuse that he couldn't have prevented her from going? You can bet your life she wouldn’t have gotten the chance to indulge her talent for morbid histrionics had I been there! But like you, Sweet, t'd prefer to change the subject - God knows, it's not a pleasant one!
I was glad to learn that the difficulties about your grand-mother's estate were amicably settled. I'd like to know the details - if your Mom don't mind!

You mention Goldie's surprising you by cooking supper and cleaning up the bath room. Seems there's good in everyone, however reluctant they may be to indulge it.

You also talk about Jack N's letter that you received that day requesting the “business plans." No, darling. I wasn't angry with you for not considering it as fully as (I) wanted (you) to." But I have already written al length to tell you that I was disappointed at your reaction. I hope, Sweet, that I did something towards clearing up the “complications” you mention here in my long letter on the subject. I guess I may as well confess that I've just about stopped thinking about the venture. I'm very much afraid that you spoiled my appetite for it by your very apparent hesitancy to make the plunge. Do not think for a minute, honey, that I’ll be in any position a few months after I return to civilian life to make the break. Not a bit of it - I’ll be busy at some job or other making the weekly wage to support us, and it's neither wise nor easy to toss up a job once one has it. The way I see it - we either make the break shortly after I get back - or never! But I have no intention of trying to talk you into anything - I just didn't want you to have any illusions on the score, Baby. No hard feelings, I assure you and no recriminations afterward, either. Always remember, Chippie, it was your choice, and you made it—

That's about all for now, sweetheart. My dearest love to you and our punkin. God keep you well! Love to all from

Your adoring
Phil
From postmarked envelope dated December 15, 1944
Dear Ev,
Glad to know of what you did.
Terribly shocked about Betty. Doesn’t seem possible. Brings to mind the boy here that woke up five days after he was knocked out by a shell’s concussion. He lost his hearing. Says he didn’t know a thing. For all he knew he could have been in heaven or hell when he opened his eyes in a hospital. So it isn’t too bad I guess, when our time must come, for us whose time has come.
Ev, I’ll be as per schedule. N.Y. on the 22. Do come and visit me in the hospital around the second week in January. I’d sure like to see you, honey. I’ve lots to say; plenty that’s surprising too.
Please convey my regrets to Phil. I can’t settle down to writing to him. He’ll have to wait a few months now. I have three pages started, and I thought his last letter was swell and I’d like to be able to become partners with him, but I can’t write. Maybe I’ll change my mind on the train. Regards to all.
Love,
Jackie
Posted by Marilyn at 9:51 AM