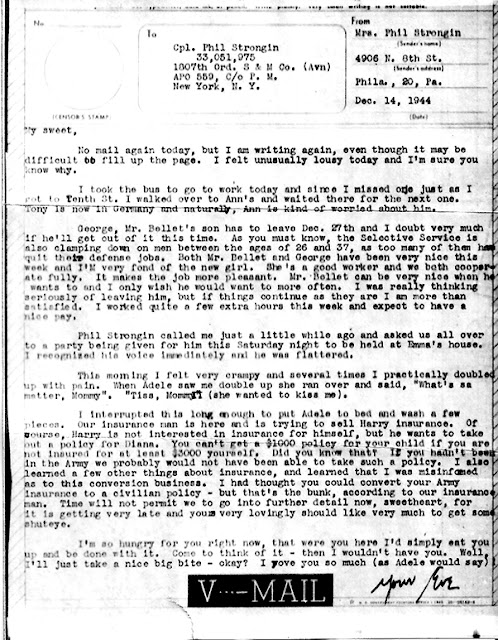 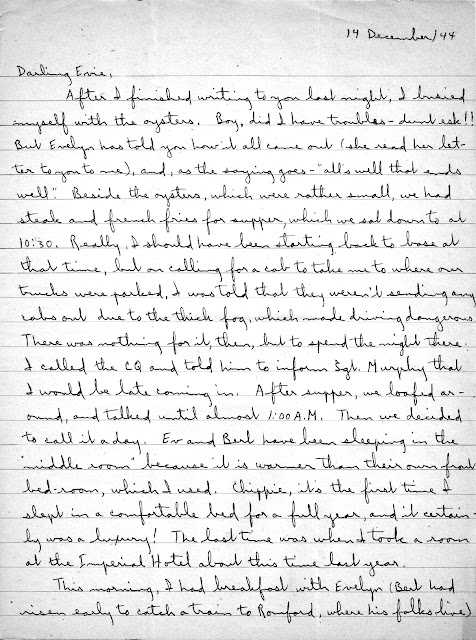 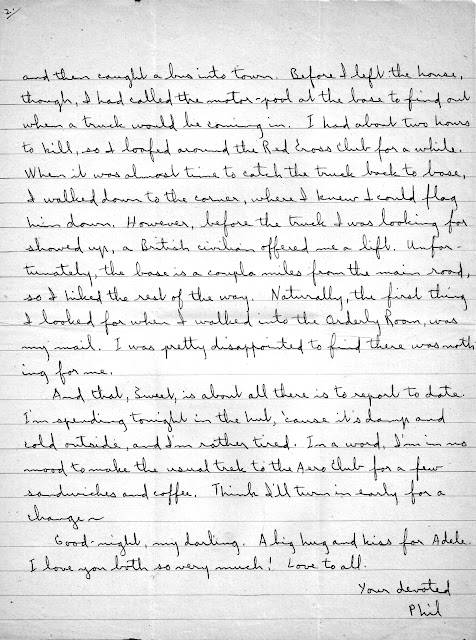 No mail again today, but I am writing again, even though it may be difficult to fill up the page. I felt unusually lousy today and I'm sure you know why.

I took the bus to go to work today and since I missed one just as I got to Tenth St. I walked over to Ann's and waited there for the next one. Tony is now In Germany and naturally, Ann is kind of worried about him.

George, Mr. Bellet's son has to leave Dec. 27th and I doubt very much If he'll get out of it this time. As you must know, the Selective Service is also clamping down on men between the ages of 26 and 37, as too many of them have quit their defense jobs. Both Mr. Bellet and George have been very nice this week and I'm very fond of the new girl. She's a good worker and we both cooperate fully. It makes the job more pleasant. Mr. Bellet can be very nice when he wants to and I only wish he would want to more often. I was really thinking seriously of leaving him, but if things continue as they are I am more than satisfied. I worked quite a few extra hours this week and expect to have a nice pay.

Phil Strongin called me just a little while ago and asked us all over to a party being given for him this Saturday night to be held at Emma's house. I recognized his voice immediately and he was flattered,

This morning I felt very crampy and several times I practically doubled up with pain. When Adele saw me double up she ran over and said, "What’s sa matter, Mommy" "Tiss, Mommy”! (she wanted to kiss me ).

I interrupted this long enough to put Adele to bed and wash a few pieces. Our insurance man is here and is trying to sell Harry insurance. Of course, Harry is not interested in insurance for himself, but he wants to take out a policy for Diana. You can't got a $1000 policy for your child if you are not insured for at least $3000 yourself. Did you know that? If you hadn't been in the Army we probably would not have been able to take such a policy. I also learned a few other things about insurance, and learned that I was misinformed as to this conversion business. I had thought you could convert your Army Insurance to a civilian policy - but that's the bunk, according to our insurance man. Time will not permit me to go into further detail now, sweetheart, for it is getting very late and yours very lovingly should like very much to get some shuteye.

I'm so hungry for you right now, that were you here I’d simply eat you up and be done with it. Come to think of it - then I wouldn't have you. Well, I’ll just take a nice big bite - okay? I yove you so much (as Adele would say)
Your Eve

After I finished writing to you last night, I busied myself with the oysters. Boy, did I have troubles - don’t ask!! But Evelyn has told you how it all came out (she read her letter to you to me), and, as the saying goes - "all's well that ends well." Beside the oysters, which were rather small, we had steak and french fries for supper, which we sat down to at 10:30. Really, I should have been starting back to base at that time, but on calling for a cab to take me to where our trucks were parked, I was told that they weren't sending any cabs out due to the thick fog, which made driving dangerous. There was nothing for it, then, but to spend the night there. I called the CQ and told him to inform Sgt. Murphy that I would be late coming in. After supper, we loafed around, and talked until almost 1:00 A.M. Then we decided to call it a day. Ev and Bert have been sleeping in the “middle room" because it is warmer than their own front bed-room, which I used. Chippie, it's the first time I slept in a comfortable bed for a full year, and it certainly was a luxury! The last time was when I took a room at the Imperial Hotel about this time last year.
This morning, I had breakfast with Evelyn (Bert had risen early to catch a train to Romford, where his folks live) and then caught a bus into town. Before I left the house, though, I had called the motor-pool at the base to find out when a truck would be coming in. I had about two hours to kill, so I loafed around the Red Cross Club for a while. When it was almost time to catch the truck back to base, I walked down to the corner, where I knew I could flag him down. However, before the truck I was looking for showed up, a British civilian offered me a lift. Unfortunately, the base is a coupla miles from the main road, so I hiked the rest of the way. Naturally, the first thing I looked for when I walked into the Orderly Room, was my mail. I was pretty disappointed to find there was nothing for me.

And that, Sweet, is about all there is to report to date. I'm spending tonight in the hut, ’cause it’s damp and cold outside, and I’m rather tired. In a word, I'm in no mood to make the usual trek to the Aero Club for a few sandwiches and coffee. Think I'll turn in early for a change—

Good night, my darling. A big hug and kiss for Adele. I love you both so very much! Love to all.

Your devoted
Phil
Posted by Marilyn at 9:09 AM