Post #535 - December 22, 1944 I Just Heard a Song Over the Radio Which Sounded Very Much Like the Song You and Jack N. Wrote and The Surprise German Offensive is the Current Topic of the Day 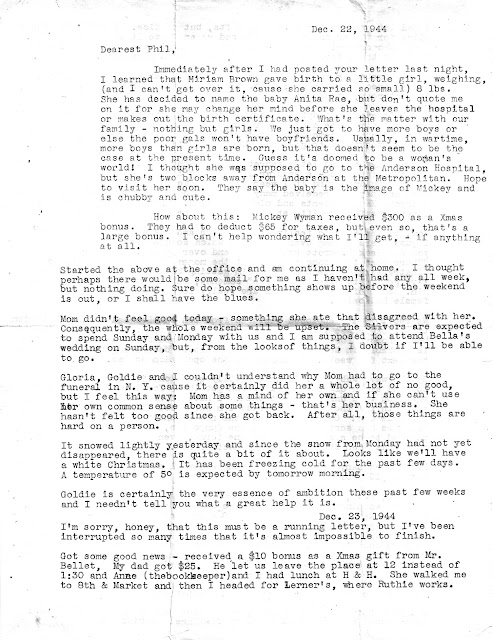 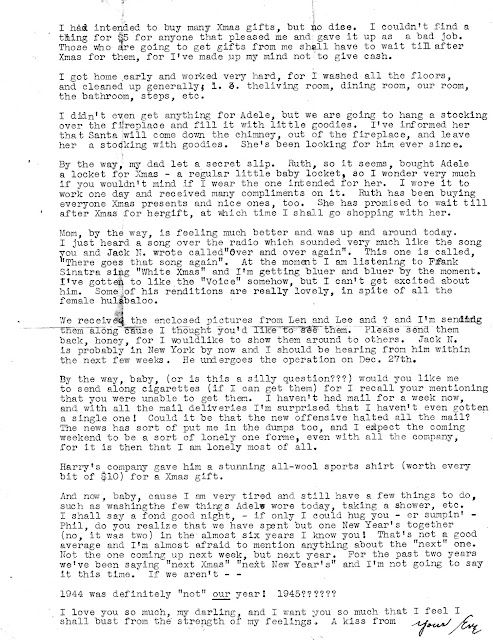 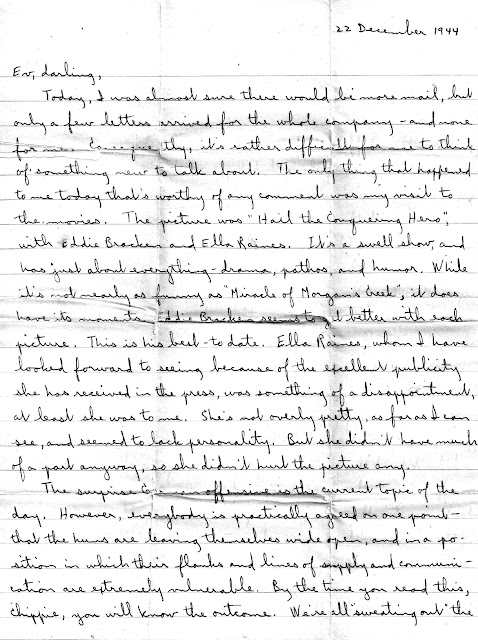 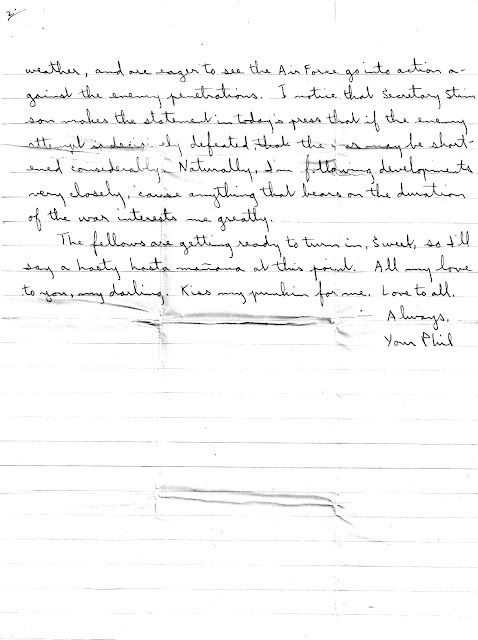 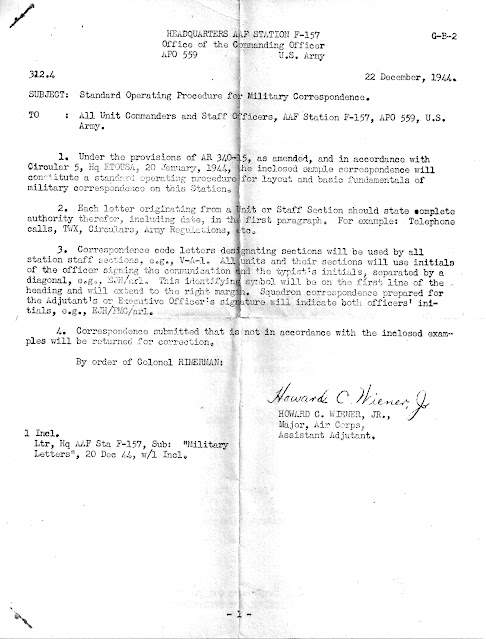 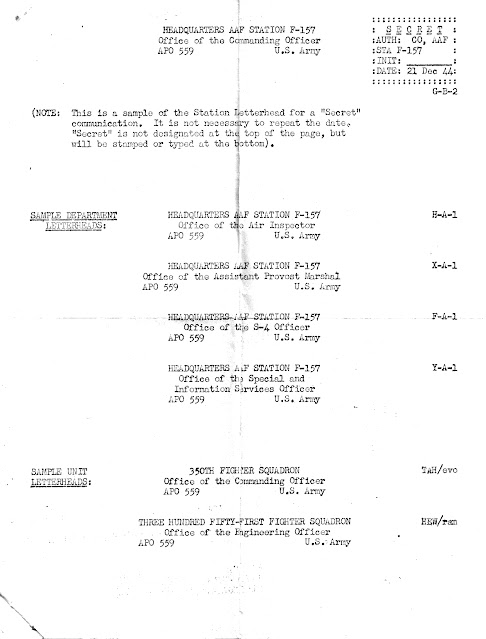 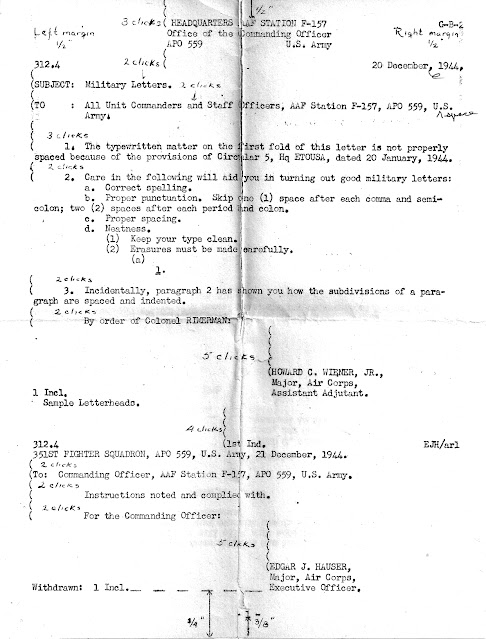 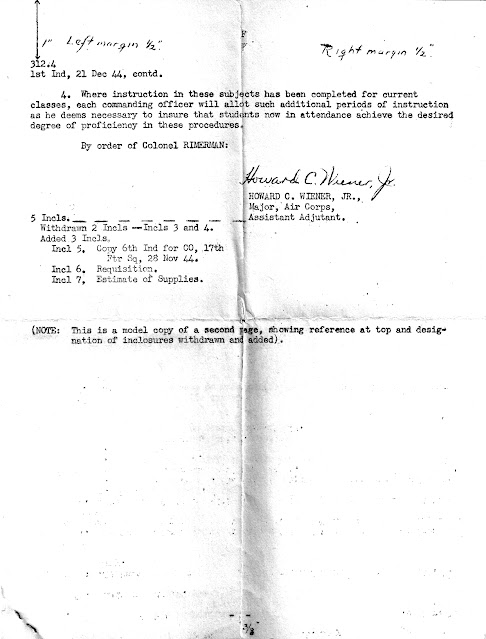 Immediately after I had posted your letter last night, I learned that Miriam Brown gave birth to a little girl, weighing, (and I can't get over it, cause she carried so small) 8 lbs. She has decided to name the baby Anita Rae, but don't quote me on it for she may change her mind before she leaves the hospital or makes out the birth certificate. What's the matter with our family - nothing but girls. We just got to have more boys or else the poor gals won't have boyfriends. Usually, in wartime, more boys than girls are born, but that doesn't seem to be the case at the present time, Guess it's doomed to be a woman's world! I thought she was supposed to go to the Anderson Hospital, but she is two blocks away from Anderson at the Metropolitan. Hope to visit her soon. They say the baby is the image of Mickey and is chubby and cute.

How about this: Mickey Wyman received 300 as a Xmas bonus. They had to deduct $65 for taxes, but even so, that's a large bonus. I can't help wondering what I'll get, - if anything at all.

Started the above at the office and am continuing at home. I thought perhaps there would be some mail for me as I haven't had any all week, but nothing doing. Sure do hope something shows up before the weekend is out, or I shall have the blues.

Mom didn't feel good today - something she ate that disagreed with her. Consequently, the whole weekend will be upset. The Silvers are expected to spend Sunday and Monday with us and I am supposed to attend Bella's wedding on Sunday, but, from the looks of things, I doubt if I'll be able to go.

Gloria, Goldie and I couldn't understand why mom had to go to the funeral in N.Y. cause it certainly did her a whole lot of no good, but I feel this way: Mom has a mind of her own and if she can't use her own common sense about some things - that's her business. She hasn't felt too good since she got back. After all, those things are hard on a person.

It snowed lightly yesterday and since the snow from Monday had not yet disappeared, there is quite a bit of it about. Looks like we'll have a white Christmas. It has been freezing cold for the past few days. A temperature of 5° is expected by tomorrow morning.

Goldie is certainly the very essence of ambition these past few weeks and I needn't tell you what a great help it is.

Dec. 23, 1944
I'm sorry, honey, that this must be a running letter, but I've been interrupted so many times that it's almost impossible to finish.

I had intended to buy many Xmas gifts, but no dice. I couldn't find a thing for $5 for anyone that pleased me and gave it up as a bad job. Those who are going to get gifts from me shall have to wait till after Xmas for them, for I've made up my mind not to give cash.

I got home early and worked very hard, for I washed all the floors, and cleaned up generally; i.e. the living room, dining room, our room, the bathroom, steps, etc.

I didn't even get anything for Adele, but we are going to hang a stocking over the fireplace and fill it with little goodies. I've informed her that Santa will come down the chimney, out of the fireplace, and leave her a stocking with goodies. She's been looking for him ever since.

By the way, my dad let a secret slip. Ruth, so it seems, bought Adele a locket for Xmas - a regular little baby locket, so I wonder very much if you wouldn't mind if I wear the one intended for her. I wore it to work one day and received many compliments on it. Ruth has been buying everyone Xmas presents and nice ones, too. She has promised to wait till after Xmas for her gift, at which time I shall go shopping with her.

Mom, by the way, is feeling much better and was up and around today. I just heard a song over the radio which sounded very much like the song you and Jack N. wrote called "Over and over again". This one is called. "There goes that song again". At the moment I am listening to Frank Sinatra sing "White Xmas" and I'm getting bluer and bluer by the moment.

I've gotten to like the "Voice" somehow, but I can't get excited about him. Some of his renditions are really lovely, in spite of all the female hulabaloo.

We received the enclosed pictures from Len and Lee and ? and I'm sending them along cause I thought you'd like to see them. Please send them back, honey, for I would like to show them around to others. Jack N. is probably in New York by now and I should be hearing from him within the next few weeks. He undergoes the operation on Dec. 27th.

By the way, baby, (or is this a silly question???) would you like me to send along cigarettes (if I can get them) for I recall your mentioning that you were unable to get them. I haven't had mail for a week now, and with all the mail deliveries I'm surprised that I haven't even gotten a single one! Could it be that the new offensive halted all the mail? The news has sort of put me in the dumps too, and I expect the coming weekend to be a sort of lonely one for me, even with all the company, for it is then that I am lonely most of all.

Harry's company gave him a stunning all-wool sports shirt (worth every bit of $10) for a Xmas gift.

And now, baby, cause I am very tired and still have a few things to do, such as washing the few things Adele wore today, taking a shower, etc. I shall say a fond good night, - if only I could hug you - er sumpin' - Phil, do you realize that we have spent but one New Year's together (no, it was two) in the almost six years I know you! That's not a good average and I'm almost afraid to mention anything about the "next" one. Not the one coming up next week, but next year. For the past two years we've been saying "next Xmas" "next New Year's" and I'm not going to say it this time. If we aren't - -

Today, I was almost sure there would be more mail, but only a few letters arrived for the whole company - and none for me. Consequently, it's rather difficult for me to think of something new to talk about. The only thing that happened to me today that's worthy of any comment was my visit to the movies. The picture was "Hail the Conquering Hero", with Eddie Bracken and Ella Raines. It's a swell show, and has just about everything - drama, pathos, and humor. While it's not nearly as funny as "Miracle of Morgan's Creek", it does have its moments. Eddie Bracken seems to get better with each picture. This is his best to date. Ella Raines, whom I have looked forward to seeing because of the excellent publicity she has received in the press, was something of a disappointment, at least she was to me. She's not overly pretty, as far as I can see, and seemed to lack personality. But she didn't have much of a part anyway, so she didn't hurt the picture any.

The surprise German offensive is the current topic of the day. However, everybody is practically agreed on one point, that the huns are leaving themselves wide open, and in a position in which their flanks and lines of supply and communication are extremely vulnerable. By the time you read this, Chippie, you will know the outcome. We're all “sweating out” the weather, and are eager to see the Air Force go into action against the enemy penetrations. I notice that secretary Stinson makes the statement in today's press that if the enemy attempt is decisively defeated, that the war may be shortened considerably. Naturally, I am following developments very closely, ’cause anything that bears on the duration of the war interests me greatly.

The fellows are getting ready to turn in, Sweet, so I'll say a hasty hasta mañana at this point. All my love to you, my darling. Kiss my punkin for me. Love to all.

Always,
Your Phil
Posted by Marilyn at 12:28 PM