Post #536 - December 23–25, 1944 Contrary to the Rumors in the States, Soap was Always in Good Supply Here and Mr. Silver has His Heart Set on Diana Going to Vassar 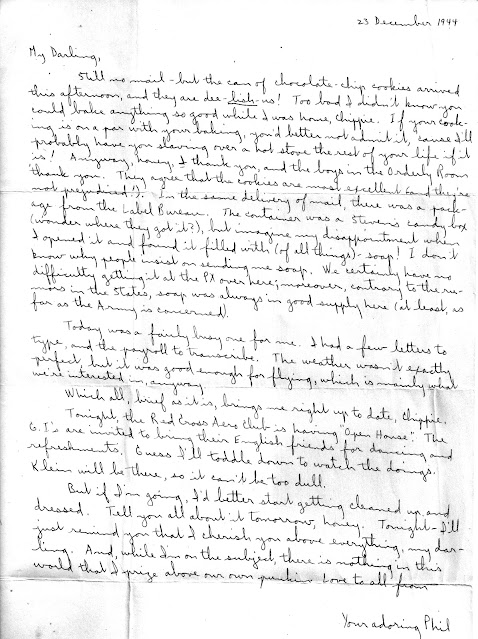 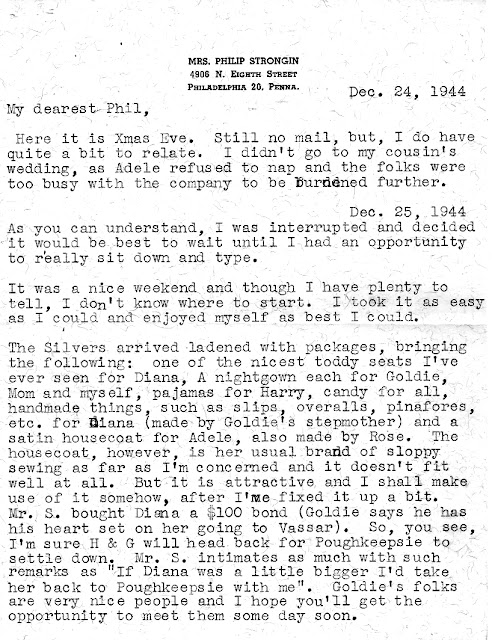 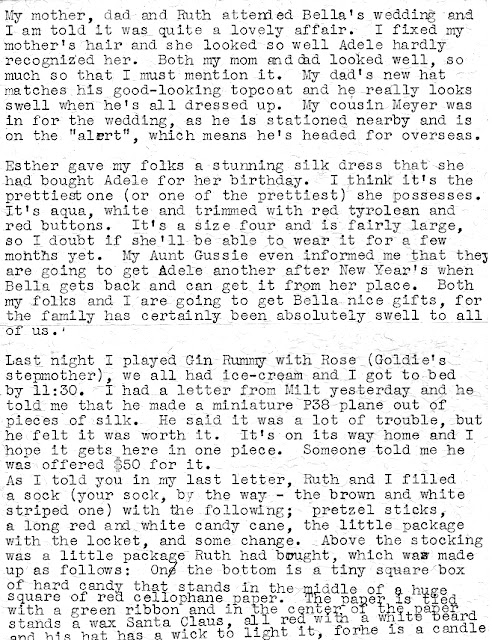 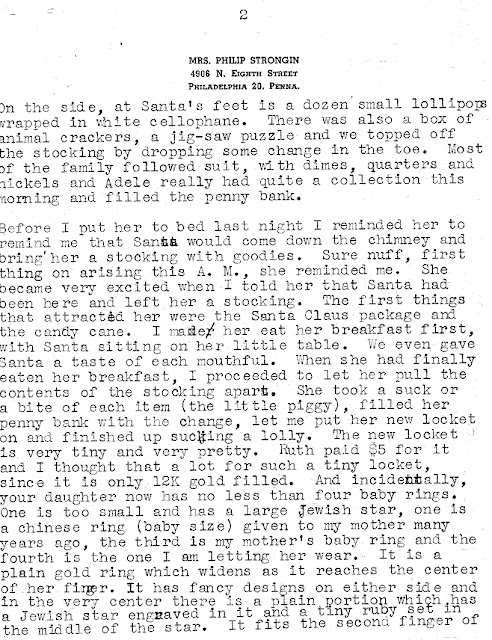 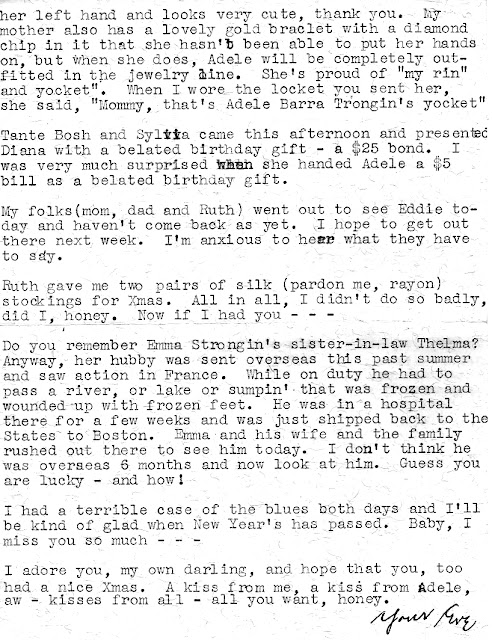 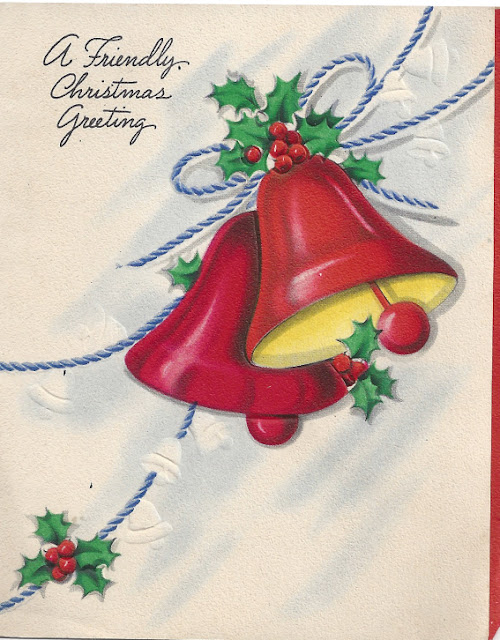 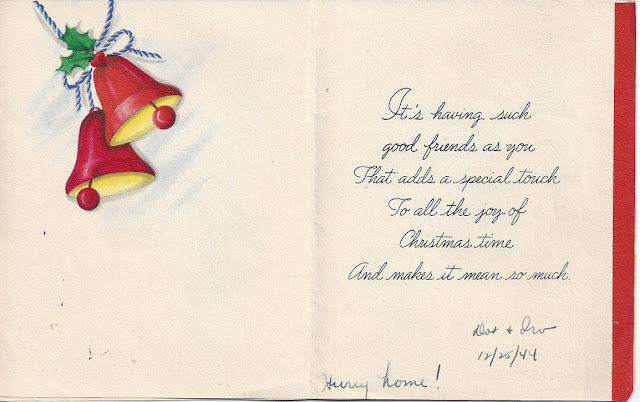 Still no mail - but the can of chocolate-chip cookies arrived this afternoon, and they are dee-lish-us! Too bad I didn't know you could bake anything so good while I was home, Chippie. If your cooking is on a par with your baking, you'd better not admit it, ’cause I’ll probably have you slaving over a hot stove the rest of your life if it is! Anyway, honey, I thank you, and the boys in the Orderly Room thank you. They agree that the cookies are most excellent (and they're not prejudiced!). In the same delivery of mail, there was a package from the Label Bureau. The container was a Steven's candy box (wonder where they got it?), but imagine my disappointment when I opened it and found it filled with (of all things) - soap! I don't know why people insist on sending me soap. We certainly have no difficulty getting it at the PX over here; moreover, contrary to the rumors in the States, soap was always in good supply here (at least, as far as the Army is concerned).

Today was a fairly busy one for me. I had a few letters to type, and the payroll to transcribe. The weather wasn’t exactly perfect, but it is good enough for flying, which is mainly what we’re interested in, anyway.
Which all, brief as it is, brings me right up to date, Chippie.

Tonight, the Red Cross Aero club is having "Open House.” The G.I.'s are invited to bring their English friends for dancing and refreshments. Guess I'll toddle down to watch the doings. Klein will be there, so it can’t be too dull

But if I'm going, I'd better start getting cleaned up and dressed. Tell you all about it
tomorrow, honey. Tonight—I’ll just remind you that I cherish you above everything, my darling. And while I’m on the subject, there is nothing in this world that I prize above our own punkin. Love to all from

Here it is Xmas Eve. Still no mail, but, I do have quite a bit to relate. I didn't go to my cousin's wedding, as Adele refused to nap and the folks were too busy with the company to be burdened further.

Dec. 25, 1944
As you can understand, I was interrupted and decided it would be best to wait until I had an opportunity to really sit down and type.

It was a nice weekend and though I have plenty to tell, I don't know where to start. I took it as easy as I could and enjoyed myself as best I could.

The Silvers arrived ladened with packages, bringing the following: one of the nicest toddy seats I’ve ever seen for Diana, A nightgown each for Goldie, Mom and myself, pajamas for Harry, candy for all, handmade things, such as slips, overalls, pinafores, etc. for Diana (made by Goldie’s stepmother) and a satin housecoat for Adele, also made by Rose. The housecoat, however, is her usual brand of sloppy sewing as far as I'm concerned and it doesn't fit well at all. But it is attractive and I shall make use of it somehow, after I've fixed it up a bit. Mr. S. bought Diana a $100 bond (Goldie says he has his heart set on her going to Vassar). So, you see, I'm sure H & G will head back for Poughkeepsie to settle down. Mr. S. intimates as much with such remarks as "If Diana was a little bigger I'd take her back to Poughkeepsie with me". Goldie's folks are very nice people and I hope you'll get the opportunity to meet them some day soon.

My mother, dad and Ruth attended Bella's wedding and I am told it was quite a lovely affair. I fixed my mother's hair and she looked so well Adele hardly recognized her. Both my mom and dad looked well, so much so that I must mention it. My dad's new hat matches his good-looking topcoat and he really looks swell when he's all dressed up. My cousin Meyer was in for the wedding, as he is stationed nearby and is on the "alert", which means he's headed for overseas.

Esther gave my folks a stunning silk dress that she had bought Adele for her birthday. I think it's the prettiest one (or one of the prettiest) she possesses. It's aqua, white and trimmed with red tyrolean and red buttons. It's a size four and is fairly large, so I doubt if she'll be able to wear it for a few months yet. My Aunt Gussie even informed me that they are going to get Adele another after New Year's when Bella gets back and can get it from her place. Both my folks and I are going to get Bella nice gifts, for the family has certainly been absolutely swell to all of us.

Last night I played Gin Rummy with Rose (Goldie’s stepmother), we all had ice-cream and I got to bed by 11:30. I had a letter from Milt yesterday and he told me that he made a miniature P38 plane out of pieces of silk. He said it was a lot of trouble, but he felt it was worth it. It's on its way home and I hope it gets here in one piece. Someone told me he was offered $50 for it. As I told you in my last letter, Ruth and I filled a sock (your sock, by the way - the brown and white striped one) with the following; pretzel sticks, a long red and white candy cane, the little package with the locket, and some change. Above the stocking was a little package Ruth had bought, which was made up as follows: On the bottom is a tiny square box of hard candy that stands in the middle of a huge square of red cellophane paper. The paper, is tied with a green ribbon and in the center of the paper stands a wax Santa Claus, all red with a white and his hat has a wick to light it, for he is a candle. On the side, at Santa's feet is a dozen small lollipops wrapped in white cellophane. There was also a box of: animal crackers, a jig-saw puzzle and we topped off the stocking by dropping some change in the toe. Most of the family followed suit, with dimes, quarters and nickels and Adele really had quite a collection this morning and filled the penny bank.

Before I put her to bed last night I reminded her to remind me that Santa would come down the chimney and bring her a stocking with goodies. Sure nuff, first thing on arising this A.M., she reminded me. She became very excited when I told her that Santa had been here and left her a stocking. The first things that attracted her were the Santa Claus package and the candy cane. I made her eat her breakfast first, with Santa sitting on her little table. We even gave Santa a taste of each mouthful. When she had finally eaten her breakfast, I proceeded to let her pull the contents of the stocking apart. She took a suck or a bite of each item (the little piggy), filled her penny bank with the change, let me put her new locket on and finished up sucking a lolly. The new locket is very tiny and very pretty. Ruth paid $5 for it and I thought that a lot for such a tiny locket, since it is only 12K gold filled. And incidentally, your daughter now has no less than four baby rings., One is too small and has a large Jewish star, one is a chinese ring (baby size) given to my mother many years ago, the third is my mother's baby ring and the fourth is the one I am letting her wear. It is a plain gold ring which widens as it reaches the center of her finger. It has fancy designs on either side and in the very center there is a plain portion which has a Jewish star engraved in it and a tiny ruby set in the middle of the star. It fits the second finger of her left hand and looks very cute, thank you. My mother also has a lovely gold bracelet with a diamond chip in it that she hasn't been able to put her hands on, but when she does, Adele will be completely outfitted in the jewelry line. She's proud of "my rin" and yocket". When I wore the locket you sent her, she said, "Mommy, that's Adele Barra Trongin's yocket."

My folks (mom, dad and Ruth) went out to see Eddie today and haven't come back as yet. I hope to get out there next week. I'm anxious to hear what they have to say.

Do you remember Emma Strongin's sister-in-law Thelma? Anyway, her hubby was sent overseas this past summer and saw action in France. While on duty he had to pass a river, or lake or sumpin’, that was frozen and wounded up with frozen feet. He was in a hospital there for a few weeks and was just shipped back to the States to Boston. Emma and his wife and the family rushed out there to see him today. I don't think he was overseas 6 months and now look at him. Guess you are lucky - and how!

I had a terrible case of the blues both days and I'll be kind of glad when New Year's has passed. Baby, I miss you so much - - -

I adore you, my own darling, and hope that you, too had a nice Xmas. A kiss from me, a kiss from Adele, aw - kisses from all - all you want, honey.
Your Eve
Posted by Marilyn at 1:22 PM