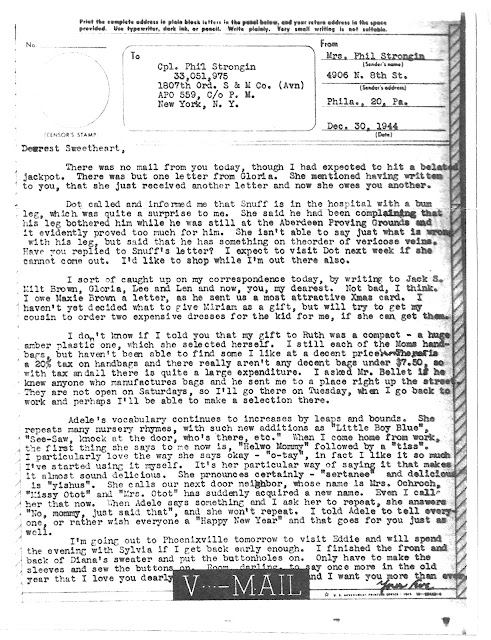 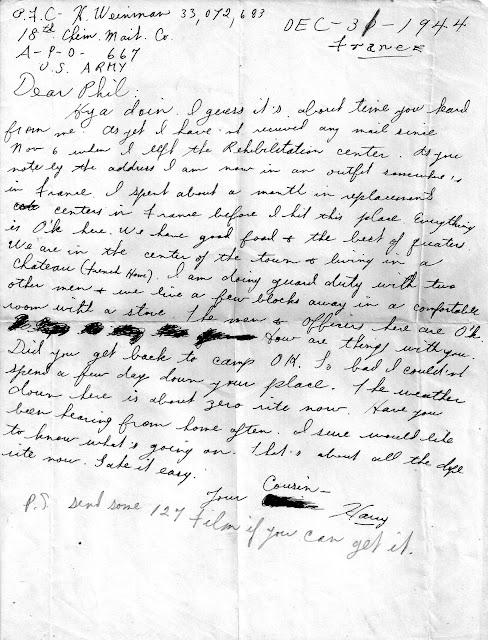 There was no mail from you today, though I had expected to hit a belated jackpot. There was but one letter from Gloria. She mentioned having written to you, that she just received another letter and now she owes you another.

Dot called and informed me that Snuff is in the hospital with a bum leg, which was quite a surprise to me. She said he had been complaining that his leg bothered him while he was still at the Aberdeen Proving Grounds and It evidently proved too much for him. She isn't able to say just what is wrong with his leg, but said that he has something on the order of varicose veins. Have you replied to Snuff's letter? I expect to visit Dot next week if she cannot come out. I'd like to shop while I'm out there also.

I sort of caught up on my correspondence today, by writing to Jack S., Milt Brown, Gloria, Lee and Len and now, you, my dearest. Not bad, I think. I owe Maxie Brown a letter, as he sent us a most attractive Xmas card. I haven't yet decided what to give Miriam as a gift, but will try to get my cousin to order two expensive dresses for the kid for me, if she can get them.

I don't know if I told you that my gift to Ruth was a compact - a huge amber plastic one, which she selected herself. I still [owe] each of the Moms handbags, but haven't been able to find some I like at a decent price now. The net is a 20% tax on handbags and there really aren't any decent bags under $7.50, so with tax and all there is quite a large expenditure. I asked Mr. Bellet if he knew anyone who manufactures bags and he sent me to a place right up the street. They are not open on Saturdays, so I'll go there on Tuesday, when I go back to work and perhaps I'll be able to make a selection there.

Adele's vocabulary continues to increases by leaps and bounds. She repeats many nursery rhymes, with such new additions as "Little Boy Blue", *See-Saw, knock at the door, who's there, etc." When I come home from work the first thing she says to me now is, "Helwo Mommy" followed by a "tiss". I particularly love the way she says okay - "o-tay", in fact I like it so much I’ve started using it myself. It's her particular way of saying it that makes it almost sound delicious. She pronounces certainly • "sertanee" and delicious is “ylshus". She calls our next door neighbor, whose name is Mrs, Ochroch. “Missy Otot" and "Mrs. Otot" has suddenly acquired a new name. Even I call her that now. When Adele says something and I ask her to repeat, she answers *No, mommy, just said that", and she won't repeat. I told Adele to tell everyone, or rather wish everyone a "Happy New Year" and that goes for you just as well.

I’m going out to Phoenixville tomorrow to visit Eddie and will spend the evening with Sylvia if I get back early enough. I finished the front and back of Diana's sweater and put the buttonholes on. Only have to make the sleeves and sew the buttons on Room, darling to say once more in the old year that I love you dearly and I want you more than ever.
Your Eve
P.F.C. H. Weinman 33,072,683
18th Chim. Mait. Co.
A-P-O- 667
U.S. ARMY
DEC.-31-1944
France
Dear Phil:
Hya doin. I guess it’s about time you heard from me. As yet I haven’t received any mail since Nov. 6 when I left the Rehabilitation center. As you note by the address I am now in an outfit somewhere’s in France. I spent about a month in replacement centers in France before I hit this place. Everything is O.K. here. We have good food & the best of quarters. We are in the center of the town & living in a Chateau (French Home). I am doing guard duty with two other men & we live a few blocks away in a comfortable room with a stove. The men & officers here are O.K. How are things with you. Did you get back to camp O.K. Too bad I couldn’t spend a few days down your place. The weather down here is about zero rite now. Have you been hearing from home often. I sure would like to know what’s going on. That’s about all the dope rite now. Take it easy.
Your Cousin - Harry
P.S. Send some 127 film if you can get it.