Post #539 - December 29, 1944 Goldie’s Stepmother (Rose Falk) was Her Father’s First Cousin Before Marriage and A Letter from Milton Brown 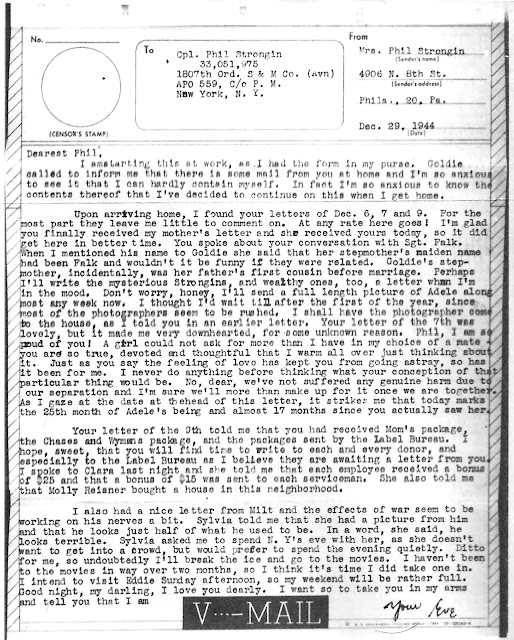 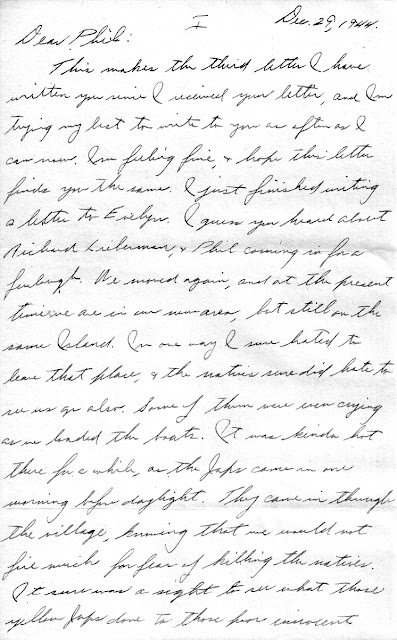 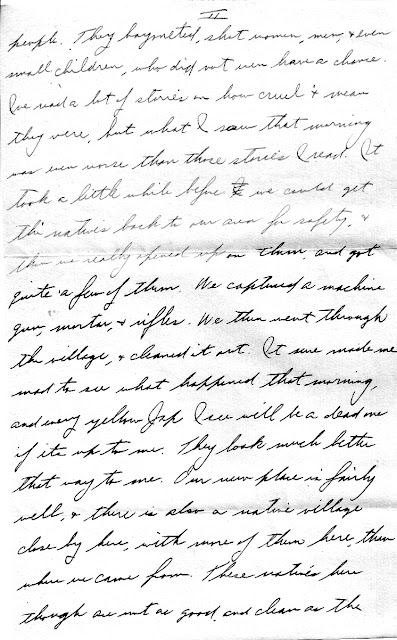 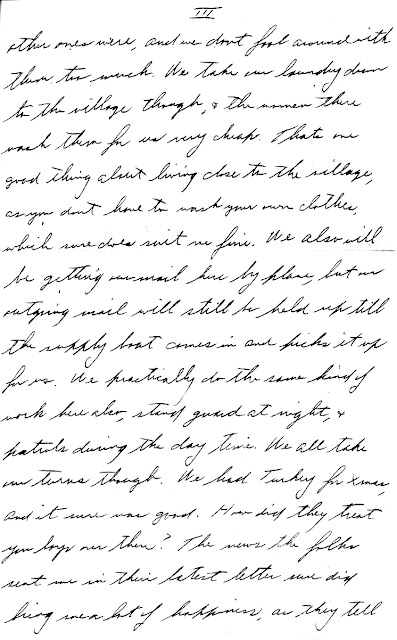 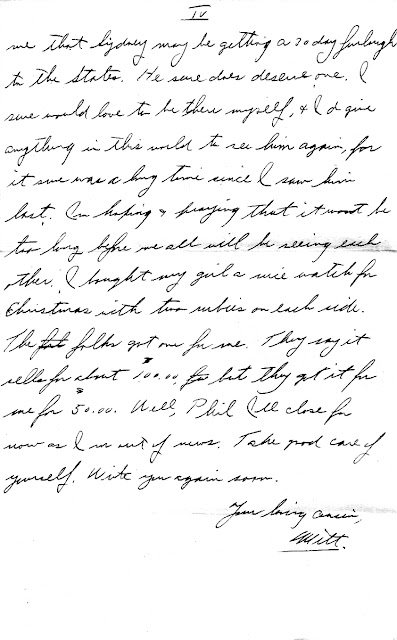 I am starting this at work, as I had the form in my purse. Goldie called to inform me that there is some mall from you at home and I'm so anxious to see it that I can hardly contain myself. In fact I'm so anxious to know the contents thereof that I've decided to continue on this when I get home.

Upon arriving home, I found your letters of Dec. 6, 7 and 9. For the most part they leave me little to comment on. At any rate here goes! I'm glad you finally received my mother's letter and she received yours today, so it did get here in better time. You spoke about your conversation with Sgt. Falk. When I mentioned his name to Goldie she said that her stepmother's maiden name had been Falk and wouldn't it be funny if they were related. Goldie’s stepmother, incidentally, was her father's first cousin before marriage. Perhaps I'll write the mysterious Strongins, and wealthy ones, too, a letter when I'm in the mood. Don't worry, honey, I'll send a full length picture of Adele along most any week now. I thought I’d wait till after the first of the year, since most of the photographers seem to be rushed. I shall have the photographer come to the house, as I told you in an earlier letter. Your letter of the 7th was lovely, but it made me very downhearted, for some unknown reason. Phil, I am so proud of you! A girl could not ask for more than I have in my choice of a mate - you are so true, devoted and thoughtful that I warm all over just thinking about it. Just as you say the feeling of love has kept you from going astray, so has it been for me. I never do anything before thinking what your conception of that particular thing would be. No, dear, we've not suffered any genuine harm due to our separation and I'm sure we'll more than make up for it once we are together. As I gaze at the date at the head of this letter, it strikes me that today marks the 25th month of Adele's being and almost 17 months since you actually saw her.

Your letter of the 9th told me that you had received Mom's package, the Chase’s and Wymen’s package, and the packages sent by the Label Bureau. I hope, sweet, that you will find time to write to each and every donor, and especially to the Label Bureau as I believe they are awaiting a letter from you. I spoke to Clara last night and she told me that each employee received a bonus of $25 and that a bonus of $15 was sent to each serviceman. She also told me that Molly Reisner bought a house in this neighborhood.

I also had a nice letter from Milt and the effects of war seem to be working on his nerves a bit. Sylvia told me that she had a picture from him and that he looks just half of what he used to be. In a word, she said, he looks terrible. Sylvia asked me to spend N.Y.'s eve with her, as she doesn't want to get into a crowd, but would prefer to spend the evening quietly. Ditto for me, so undoubtedly I'll break the ice and go to the movies. I haven't been to the movies in way over two months, so I think it's time I did take one in. I intend to visit Eddie Sunday afternoon, so my weekend will be rather full. Good night, my darling, I love you dearly. I want so to take you in my arms and tell you that I am
Your Eve
Dec. 29, 1944
Dear Phil:
This makes the third letter I have written you since I received your letter, and I’m trying my best to write to you as often as I can now. I’m feeling fine & hope this letter finds you the same. I just finished writing a letter to Evelyn. I guess you heard about Richard Lieberman & Phil coming in for a furlough. We moved again, and at the present time we are in our new area, but still on the same Island. In one way I sure hated to leave that place, & the natives sure did hate to see us go also. Some of them were even crying as we headed to the boats. It was kinda hot there for a while, as the Japs came in one morning before daylight. They came in through the village, knowing that we would not fire much for fear of killing the natives. It sure was a sight to see what those yellow Japs done to those poor innocent people. They bayonetted, shot women, men & even small children, who did not even have a choice. I’ve read a lot of stories on how cruel & mean they were, but what I saw that morning was even worse than those stories I read. It took a little while before we could get the natives back to our area for safety & then we really opened up on them, and got quite a few of them. We captured a machine gun, mortar, & rifles. We then went through the village, & cleaned it out. It sure made me mad to see what happened that morning, and every yellow Jap I see will be a dead one if its up to me. They look much better that way to me. Our new place is fairly well, & there is also a native village close by here, with more of them here than where we came from. These natives here though are not as good and clean as the other ones were, and we don’t fool around with them too much. We take our laundry down to the village, though, and the women there wash them for us very cheap. That’s one good thing about living close to the village, as you don’t have to wash your own clothes, which sure does suit me fine. We also will be getting our mail here by plane, but our outgoing mail will still be held up till the supply boat comes in and picks it up for us. We practically do the same kind of work here also, stand guard at night, & patrols during the day time. We all take our turns though. We had turkey for Xmas, and it sure was good. How did they treat you boys over there? The news the folks sent me in their latest letter sure did bring me a lot of happiness, as they tell me that Sydney may be getting a 30 day furlough to the States. He sure does deserve one. I sure would love to be there myself, & I’d give anything in the world to see him again, for it sure was a long time since I saw him last. I’m hoping & praying that it won’t be too long before we all will be seeing each other. I bought my girl a nice watch for Christmas with two rubies on each side. The folks got one for me. They say it sells for about $100.00, but they got it for me for $50.00. Well, Phil I’ll close for now as I am out of news. Take good care of yourself. Write you again soon.
Your loving cousin,
Milt
Posted by Marilyn at 7:41 AM