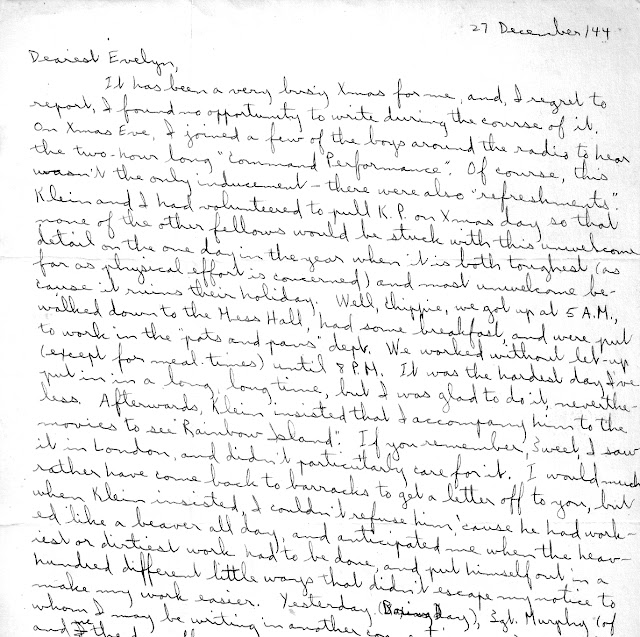 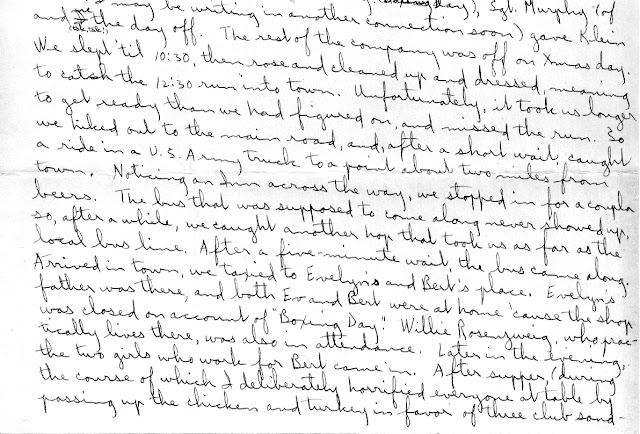 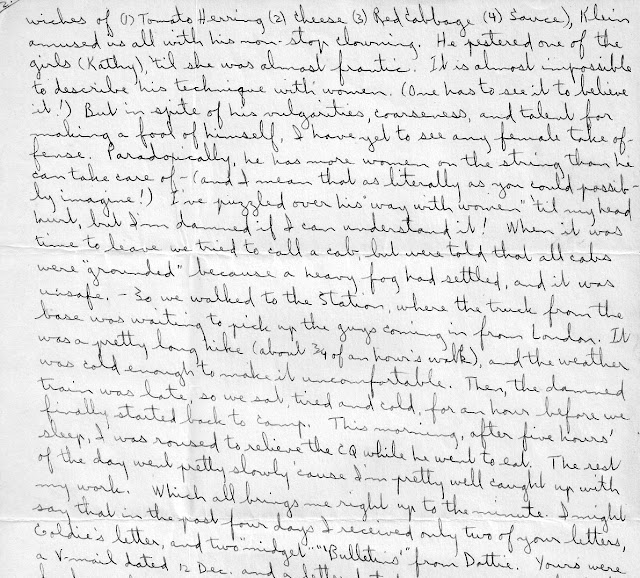 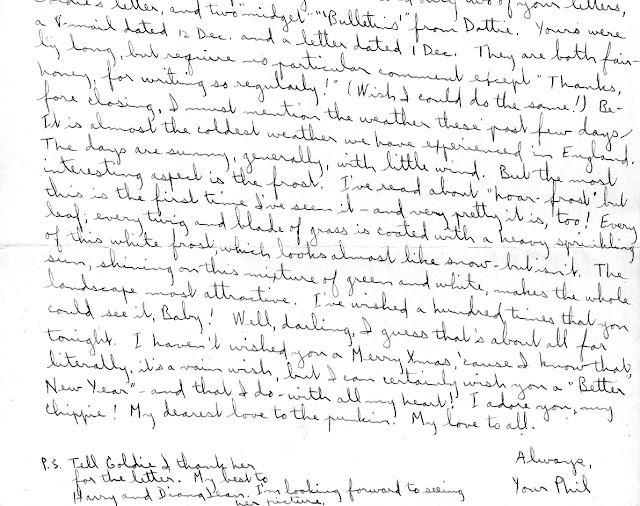 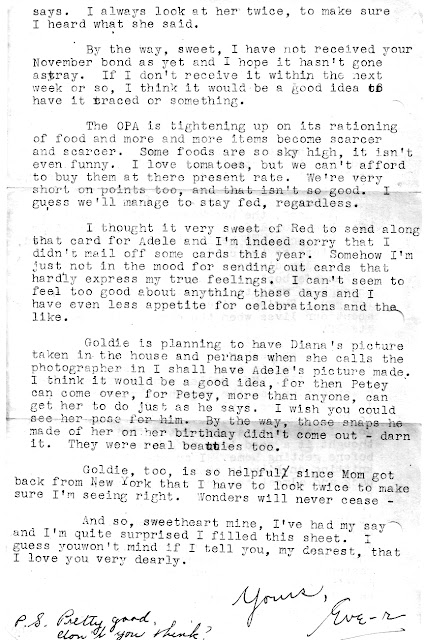 It has been a very busy Xmas for me, and, I regret to report, I found no opportunity to write during the course of it. On Xmas Eve, I joined a few of the boys around the radio to hear the two-hour long "Command Performance. Of course, this wasn't the only inducement - there were also “refreshments". Klein and I had volunteered to pull K.P. on Xmas day so that none of the other fellows would be stuck with this unwelcome detail on the one day in the year when it is both toughest (as far as physical effort is concerned) and most unwelcome because it ruins their holiday. Well, Chippie, we got up at 5 A.M., walked down to the Mess Hall, had some breakfast, and were put to work in the “pots and pans" dept. We worked without let-up (except for meal times) until 8 P.M. It was the hardest day I’ve put in in a long, long time, but I was glad to do it, nevertheless. Afterwards, Klein insisted that I accompany him to the movies to see “Rainbow Island.” If you remember, Sweet, I saw it in London, and didn't particularly care for it. I would much rather have come back to barracks to get a letter off to you, but when Klein insisted, I couldn’t refuse him 'cause he had worked like a beaver all day, and anticipated me when the heaviest or dirtiest work had to be done and put himself out in a hundred different little ways that didn’t escape my notice to make my work easier. Yesterday, (Boxing Day), Sgt. Murphy (of whom I may be writing in another connection soon) gave Klein and me the day off. The rest of the company was off on Xmas day. We slept ’til 10:30, then rose and cleaned up and dressed, meaning to catch the 12:30 run into town. Unfortunately, it took us longer to get ready than we had figured on, and missed the run. So we hiked out to the main road, and, after a short wait, caught a ride in a U.S. Army truck to a point about two miles from town, Noticing an Inn across the way, we stopped in for a coupla beers. The bus that was supposed to come along never showed up so, after a while, we caught another hop that took us as far as the local bus line. After a five minute wait, the bus come along. Arrived in town, we taxied to Evelyn’s and Bert's place. Evelyn's father was there, and both Ev and Bert were at home ’cause the shop was closed on account of “Boxing Day." Willie Rosenzweig, who practically lives there, was also in attendance. Later in the evening, the two girls who work for Bert came in. After supper, during the course of which I deliberately horrified everyone al table by passing up the chicken and turkey in favor of three club sandwiches of 1) Tomato Herring (2) Cheese (3) Red cabbage (4) Sauce), Klein amused us all with his non-stop clowning. He pestered one of the
girls (Kathy), ’til she was almost frantic. It is almost impossible to describe his technique with women. (One has to see it to believe it!) But in spite of his vulgarities, coarseness, and talent for making a fool of himself, I have yet to see any female take offense. Paradoxically, he has more women on the string than he can take care of - (and I mean that as literally as you could possibly imagine!) I've puzzled over his “way with women" ’til my head hurt, but I’m damned if I can understand it! When it was time to leave we tried to call a cab, but were told that all cabs were “grounded" because a heavy fog had settled, and it was unsafe. - So we walked to the station, where the truck from the base was waiting to pick up the guys coming in from London. It was a pretty long hike (about 3/4 of an hour's walk), and the weather was cold enough to make it uncomfortable. Then the damned train was late, so we sat, tired and cold, for an hour before we finally started back to camp. This morning, after five hours' sleep, I was roused to relieve the CQ while he went to eat. The rest of the day went pretty slowly ’cause I’m pretty well caught up with my work. Which all brings me right up to the minute. I might say that in the past four days I received only two of your letters, Goldie's letter, and two midget "Bulletins” from Dottie. Yours were a V-mail dated 12 Dec. and a letter dated 1 Dec. They are both fairly long, but require no particular comment except “Thanks, honey, for writing so regularly!" (Wish I could do the same!) Before closing, I must mention the weather these past few days. It is almost the coldest weather we have experienced in England. The days are sunny, generally, with little wind. But the most interesting aspect is the frost. I've read about "hoar-frost” but this is the first time I've seen it – and very pretty it is, too! Every leaf; every twig and blade of grass is coated with a heavy sprinkling of this white frost, which looks almost like snow - but isn’t. The sun, shining on this mixture of green and white, makes the whole landscape most attractive. I've wished a hundred times that you could see it, Baby! Well, darling, I guess that's about all for tonight. I haven't wished you a Merry Xmas, ’cause I know that literally, it's a vain wish, but I can certainly wish you a "Better New Year" – and that I do - with all my heart! I adore you, my Chippie! My dearest love to the punkin! My love to all.

P.S. Tell Goldie I thank her for the letter. My best to Harry and Diana Jean. I'm looking forward to seeing her picture.

As seems to be my custom these days, I am starting to type this letter at work. I doubt very much if there was any mail for me today, for I am sure the folks would have called me.

The news is better today - for a change and that is heartening. I wonder, honey, if you still feel so optimistic as you did in a recent (?) letter.

Anne, the bookkeeper told me quite a bit about her life history - and it certainly is a history. To begin with - she was married, gave birth to two children, who were born dead, and finally divorced her husband because he was a ”Momma's boy". You'd never think she was through so much to look at her, but that's life for you. She's a nice person and we often talk about our lives when the opportunity presents itself.

Last week and this week the wholesaler is very slow, in fact his business is almost at a standstill. Mr. Bellet went to Young's for a workout and at the present time everyone, including yours truly, is loafing. We aren't loafing because truthfully there is no work to do. I had quite a bit, but I finished and thought it a good idea to get my letter typed before getting home. I spent all of last night knitting on Diana's sweater and now have the back and almost the fronts completed.

Adele had a running nose, but I caught it just in time - that is I treated it as you would a cold and it is just about gone now. She was very restless the other night, but last night she let me sleep uninterrupted. The snow of yesterday was more of an icy hail and this morning Adele reminded me to "put your yoshes on - it's slippery out". Some of her thoughts and sentences really floor me at times. It's really surprising to hear some of the things she says. I always look at her twice, to make sure I heard what she said.

By the way, sweet, I have not received your November bond as yet and I hope it hasn't gone astray. If I don't receive it within the next week or so, I think it would be a good idea to have it traced or something.

The OPA is tightening up on its rationing of food and more and more items become scarcer and scarcer. Some foods are so sky high, it isn't even funny. I love tomatoes, but we can't afford to buy them at there present rate. We're very short on points too, and that isn't so good. I guess we'll manage to stay fed, regardless.

I thought it very sweet of Red to send along that card for Adele and I'm indeed sorry that I didn't mail off some cards this year. Somehow I'm just not in the mood for sending out cards that hardly express my true feelings, I can't seem to feel too good about anything these days and I have even less appetite for celebrations and the like.

Goldie is planning to have Diana's picture taken in the house and perhaps when she calls the photographer in I shall have Adele's picture made. I think it would be a good idea, for then Petey can come over, for Petey, more than anyone, can get her to do just as he says. I wish you could see her pose for him. By the way, those snaps he made of her on her birthday didn't come out - darn it. They were real beauties too.

Goldie, too, is so helpful since Mom got back from New York that I have to look twice to make sure I'm seeing right. Wonders will never cease -

And so, sweetheart mine, I've had my say and I'm quite surprised I filled this sheet. I guess you won't mind if I tell you, my dearest, that I love you very dearly.
Yours,
Eve-r